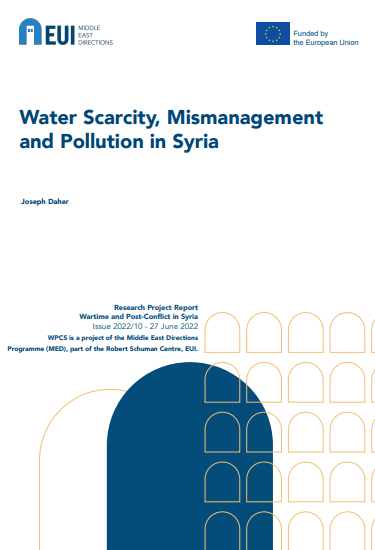 Water scarcity, mismanagement and pollution were growing concerns in Syria before 2011. Destruction of and damage to water infrastructure caused by the war, however, have considerably increased the previous shortcomings. Agriculture has been the economic sector most affected, with impacts on its production structure. The population has also suffered from water shortages and pollution.

Diseases have spread and continual increases in water prices have more and more impacted family expenditure in a context of sustained daily cost of living rises. Water scarcity and pollution constitute serious obstacles in any economic reconstruction process, and particularly affect agricultural food production and the well-being of the population. In Syria this is taking place alongside other factors, including shortages and high energy prices (fuel oil, gas and electricity). The effects of climate change will only further exacerbate the various predicaments related to water scarcity and pollution in the future.