Around 300 km south of Cairo, Coptic women from the village of Deir El Bersha in the Minya Governorate found their voice thanks to theatre. This is the goal of the regional project “Drama, Diversity, and Development”, launched by the MedCulture programme, financed by the European Union between 2014 and 2017. 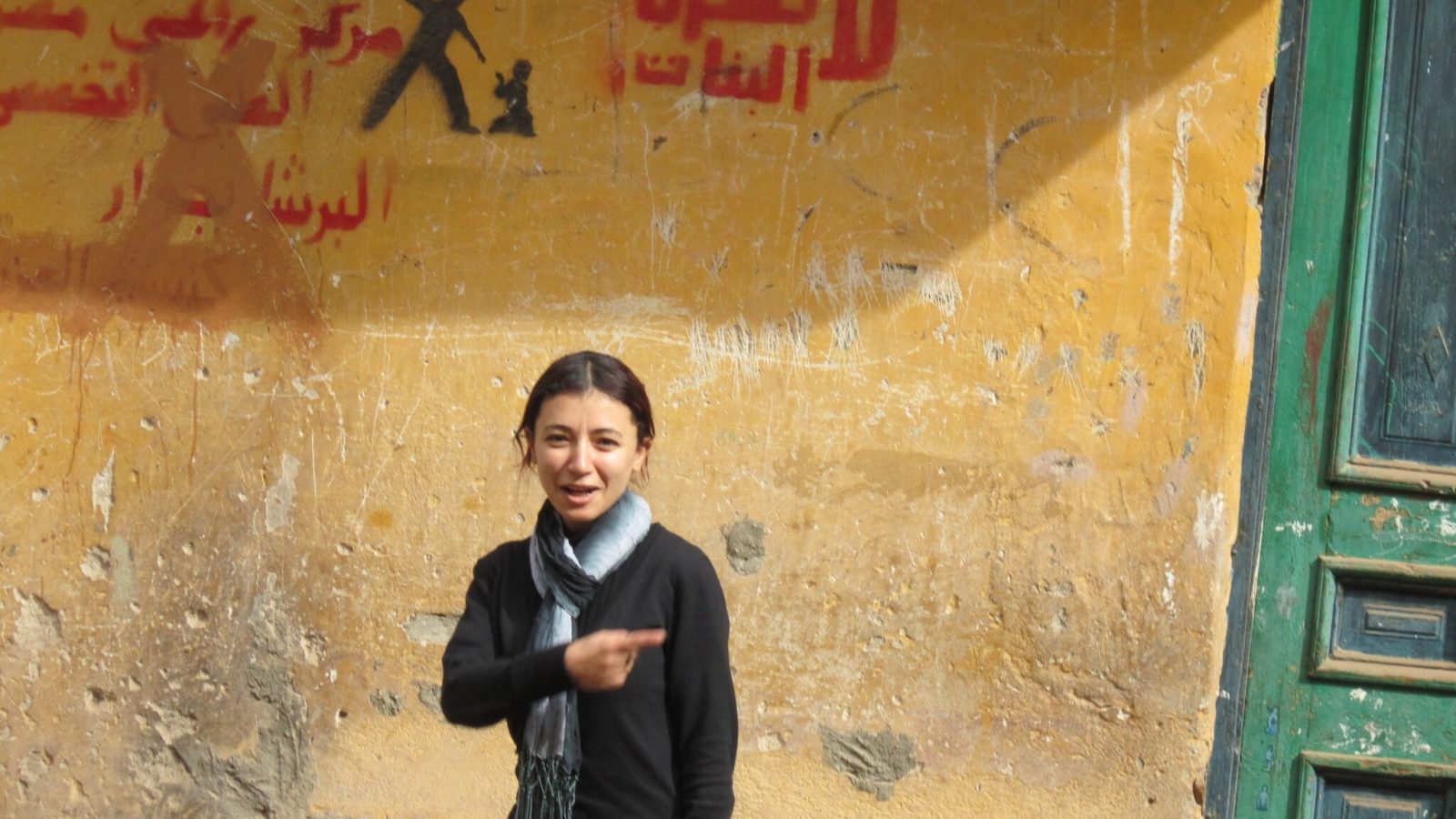 Youstina, with a graffiti in the background saying: No to violence against women

The view is stunning from the patio of the Misr for Development association, overlooking the village of Al-Barcha. So are the girls’ dreams. They seem to reign over the village and the cracked cement façades of the buildings, the distant minarets, and the much closer steeples. From this Christian district, we can see the statue of the white eagle decorating a large flamboyant house, as well as the “White House”, the residence of a family of legislators that has always dominated Egyptian politics. Symbols of wealth or social status, and of religious beliefs, abound in the neighbourhood. The girls from the Panorama Barcha theatre group, created by the association in 2014, hope for a more equal society, beyond the religious tensions that occasionally arise in the Minya governorate, roughly 300 kilometres from Cairo. As part of the MedCulture project “Drama, Diversity, and Development”, financed by the European Union, they began to play street theatre, which helps them to express their opinions and make themselves visible. (See the blog al-qatr.com)

Inhabitants from their half-Christian, half-Muslim village, pass each other in the streets with their barrows pulled by donkeys or their sort of shared rickshaws, but never invite each other over to their houses. The Muslim district is separated from the Coptic district by an imaginary line that everyone abides by, even though it does not officially exist or follow a clear path.

Of the 25 members of Panorama Barcha, only 8 women have participated in street theatre activities organised in Minya by the Cairo NGO Ikhtiyar (Choice), an association that works in particular on female rights, collaborating with local associations and coordinators on the ground. Over a period of ten months, they organised ten shows, each of them between 10 and 20 minutes, travelling across the province using the slogan The Villages’ Train.

Last August, Al-Farah (The Wedding), a show improvised and staged by the Al-Barcha group, was even performed in Tunisia. This made the village proud. Even the most sceptical parents seemed convinced when they saw their daughters invited abroad and praised by the audience. They are no longer the ones left behind by a discriminatory society. Instead, they now manage to take centre stage, even though this sometimes attracts arbitrary judgments and exposes them to a wealth of gossip. “We really are seen as the crazy members – or rather the crazy women – of the association, but it doesn’t bother us any more!” said Youstina Samir, 28 years old. She is an audacious team leader that nothing can stop. She manages the association in the absence of her sister, journalist and founder, who moved to the United States for good, as many of her neighbours wish to do.

However, Youstina does not wish to leave her country. She is more and more convinced that the village has to be developed through art and culture, while providing social assistance to Christians and Muslims. “I had already done some acting at church. But over there, boys and girls were separated during rehearsals, and we were limited to educational, and especially religious topics,” she said, insisting on the fact that Panorama Barcha really is the first theatre group specialised in street theatre in all of Minya.

I have a right to the streets

With the DDD Project team, she decided that she would perform The Wedding in front of houses under construction or on unoccupied plots of land near high-voltage cables. Muslim neighbours regularly pass through this mostly Christian part of town. “Even if they don’t let their children do theatre, thinking we are a little permissive and viewing art as illicit, they can come and see for themselves. It might make them change their minds just as it did for our parents before,” said the Barcha amateur actresses.

They did not dare perform in the streets. But with the project, they realised that it was time to break out from behind the walls of the association or of the church, to claim their right to the streets. With Chady Khalil, coach and head of the project with the Ikhtiyar association, a partner of DDD, they managed to overcome their shyness. Khalil did not have the attitude of the man from the city come to boss around people from the village. He gave the women a great deal of help in expressing their feelings. With the rest of his team, they toured seven of Minya’s villages, each time proposing a workshop of 5 to 7 days to those who were interested. “We could not directly tackle the subject of religious violence or the topic of minorities, so we decided to give a voice to women, the weak members of this society. They had to gain confidence and to create their own way of communicating resistance. On the ground, I came to understand how sectarian violence can hinder social mobility. The lack of a sense of belonging and the lack of confidence affect their way of seeing many other things,” explained Chady Khalil.

The first day of the workshop, he asked the budding actors to go from door to door in the village to collect stories. Marriage was the central concern, so they decided to make it the main theme of their show, The Wedding. The second day, the trainees pretended they were talking to “their scarecrows”. They expressed their anger in the face of those who inspire terror in them. Several of them aimed criticism at the society that burdens them and prevents them from living the way they want. The third day, which was spent on a small green island located nearby, the comedians took the plunge. During a few hours of total release, they re-imagined their lives in five years. The last day, they improvised their show, including some of the wedding songs they were told about in the village.

Sitting on the bride’s chair, each actress has her own way of talking about marriage. “Theatre is in my blood and, above all, I like improvisation. It allows me to express what I can’t say in real life. I now dress differently. I’m not the person I used to be, the woman sitting in a corner wearing a headscarf and a flowing tunic. I know I will probably never be a professional, so I want to continue teaching drama to younger generations,” Marina says. She knows that her technical degree is not very useful, not even for manual labour, but she loves theatre and bringing about change.