“An earnest gesture of appreciation and love from a Palestinian to the Maghreb”: A view on migration by ‘Young Writer Prize’ winner

Omar Shanti, 23 years old, has left his mark by winning the “Young Writer Prize”, of the (MED)RESET project, funded by the European Union, for his article entitled “El Haraga Read Through Maghrebi Literature”. The “Young Writer Prize” is an essential part of (MED)RESET project aiming to give a voice to the youth, and create joint research projects in Europe, Middle East and North Africa. 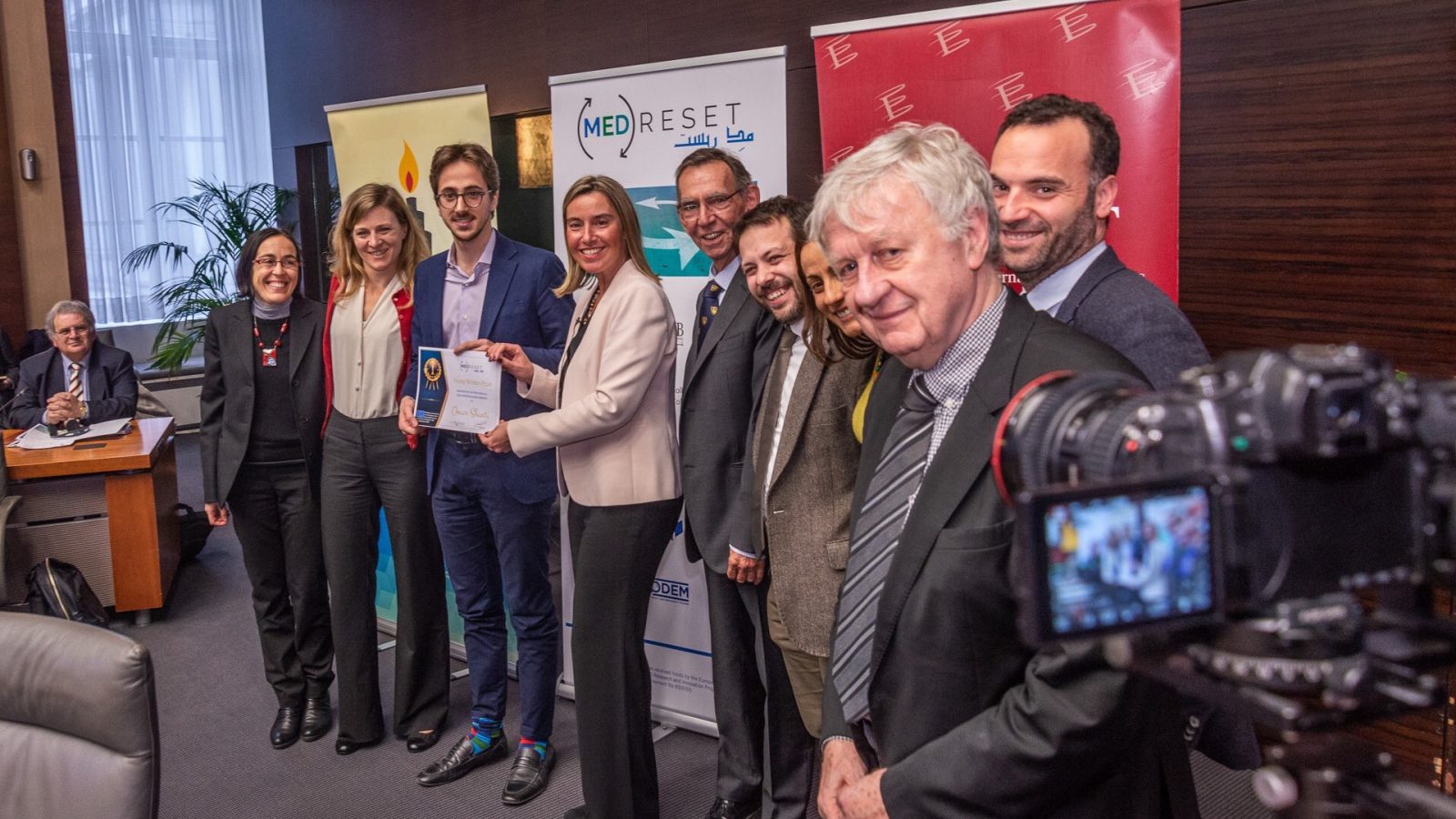 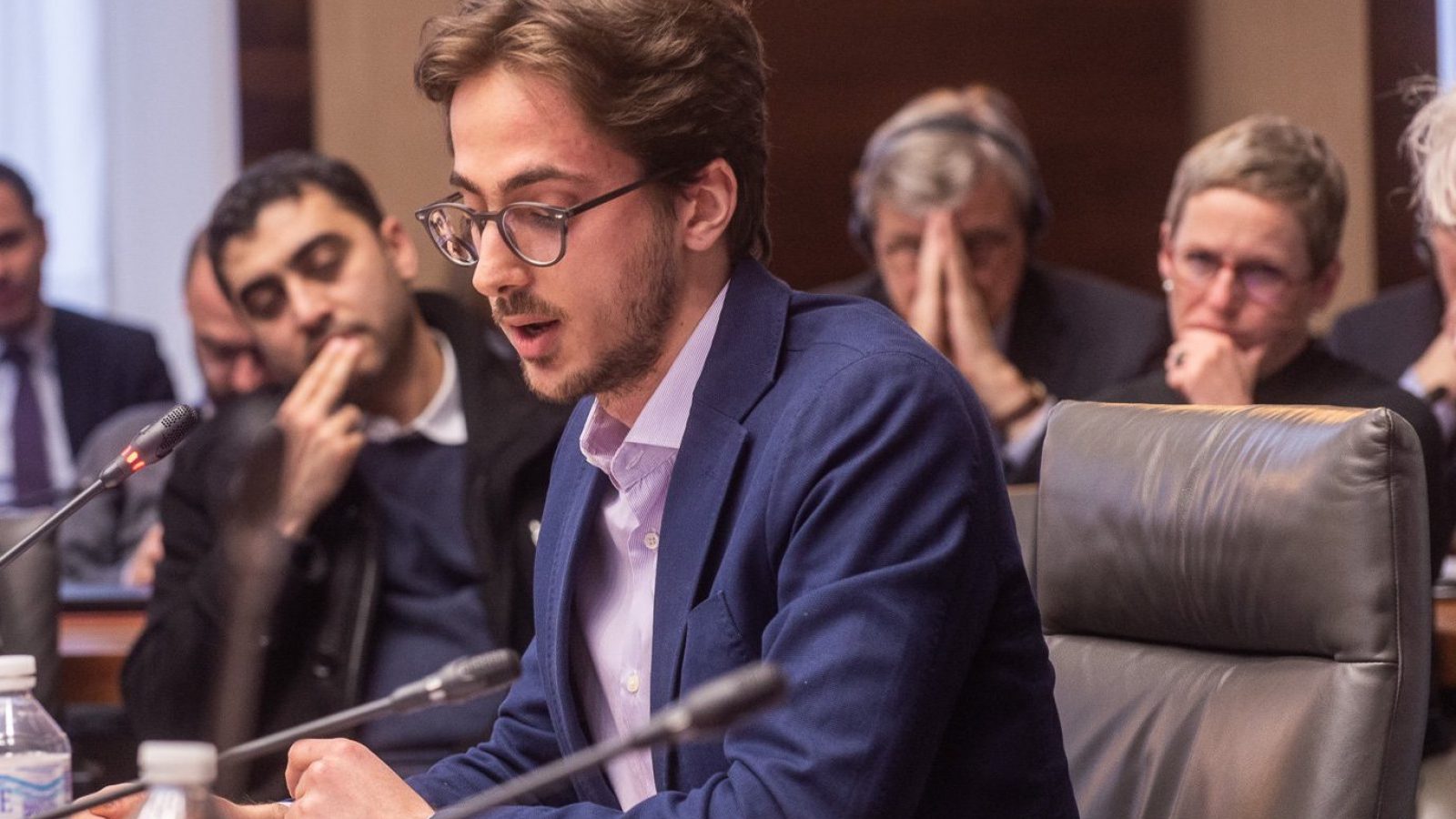 Federica Mogherini, EU High Representative, handed Omar Shanti the prize in an award ceremony that took place during a conference entitled “Middle East and European Union: New Facts, New Policies” at the Egmont Palace in Brussels. Several Arab and European ambassadors, writers, politicians and journalists attended the ceremony. Omar was honoured for his article entitled “ El Haraga Read Through Maghrebi Literary Production”. The paper that he was awarded for has tackled the issue of continuous immigration of the Arab Maghreb people, and its social, cultural, political and even psychological consequences.

Omar declared, “I gave absolutely everything I had for this paper to come to light. For weeks, it was constant research and iteration – day and night between the library and home.”
”Omar has proposed to select the term “Haraga” that is derived from the Arabic word “burning”, instead of the term illegal immigration for the important grammatical implications. When speaking about immigration, one mainly thinks of the migrant arriving at a country, as though it were totally separate from the process of leaving another. By opting for a term derived from “burning”, Omar depicts the territory left behind as on-fire – thus suggesting the continued link of the migrant to their homeland and of the homeland to the migrant. Additionally, Omar calls us to pay attention to the condition the immigrant arrives into , and the suffering they face both on the journey and upon arrival, through trying to adapt, hide, and suffer the burden of clandestine existence in an unwelcoming state. Omar considered there is unfair simplification of the equation of immigration as a whole, with all its implications and risks, and which are ignored by the media and European politicians when attacking the immigration of the Maghrebi people to Europe. The suffering of those people is also ignored, and it may be belittled in most cases.

The reason behind choosing the countries of Arab Maghreb in particular is because of the huge immigration that takes place from Morocco, Algeria and Tunisia, and the psychological, political, and social consequences affecting the immigrant, his surroundings and his family. Although the immigrant is alienated by the situation of the country in which he lives and tries to look for a better life, it does not mean that the country where he seeks refuge is going to be an attraction to him, or even that he will be accepted. Omar added, “I have chosen to write about the Maghreb specifically due in part to the immense support and solidarity the Palestinian nation receives from the Maghrebi. There are bonds of love and nationality as well as of colonial struggle – past and continuing.”. Omar believes that the Maghrebi experience has some aspects in common with the Palestinian issue, especially with regard to colonialism, suffering and immigration. In his opinion, on the one hand, if a comparison is made between the works of Algerian and Palestinian writers, they will be similar to a large extent in terms of content, specifically around themes of exile, estrangement, and colonial traumas. In a contemporary sense, Omar relates the EU’s extraterritorial tactics of arresting the flow of migrants to those that Israel have been testing out on Palestinians and African immigrants with legal impunity, in addition to the latter’s actions taken against the Palestinian citizens regarding the construction of the wall and the refusal of the return of refugees.

Through his paper, Omar reveals his objection to limit the conceptualisation of immigration to the subject, the migrant, without considering what will happen to the direct object, the “migrated from”. Using the grammar of the Arabic term “Haraga”, Omar captures the latter-figure as the “mahroog” (the burned) and articulates their own response to losing a loved one as their “inhirag” (their burning). Omar explains that leaving the home country, for him, involves three basic pillars experienced by the immigrant, and which can’t be considered separately. These pillars are emigration, i.e. leaving and its consequences; then immigration, i.e. arriving and the perils of the journey; and clandestinity which the existential state of being and remaining as an illegal resident in a foreign country. Omar argues that one’s migration is never over, since the clandestine migrant’s process of crossing the border is not over. Every interaction with police, employers, neighbours, or any member of society is a test that the migrant must pass to prevent deportation. 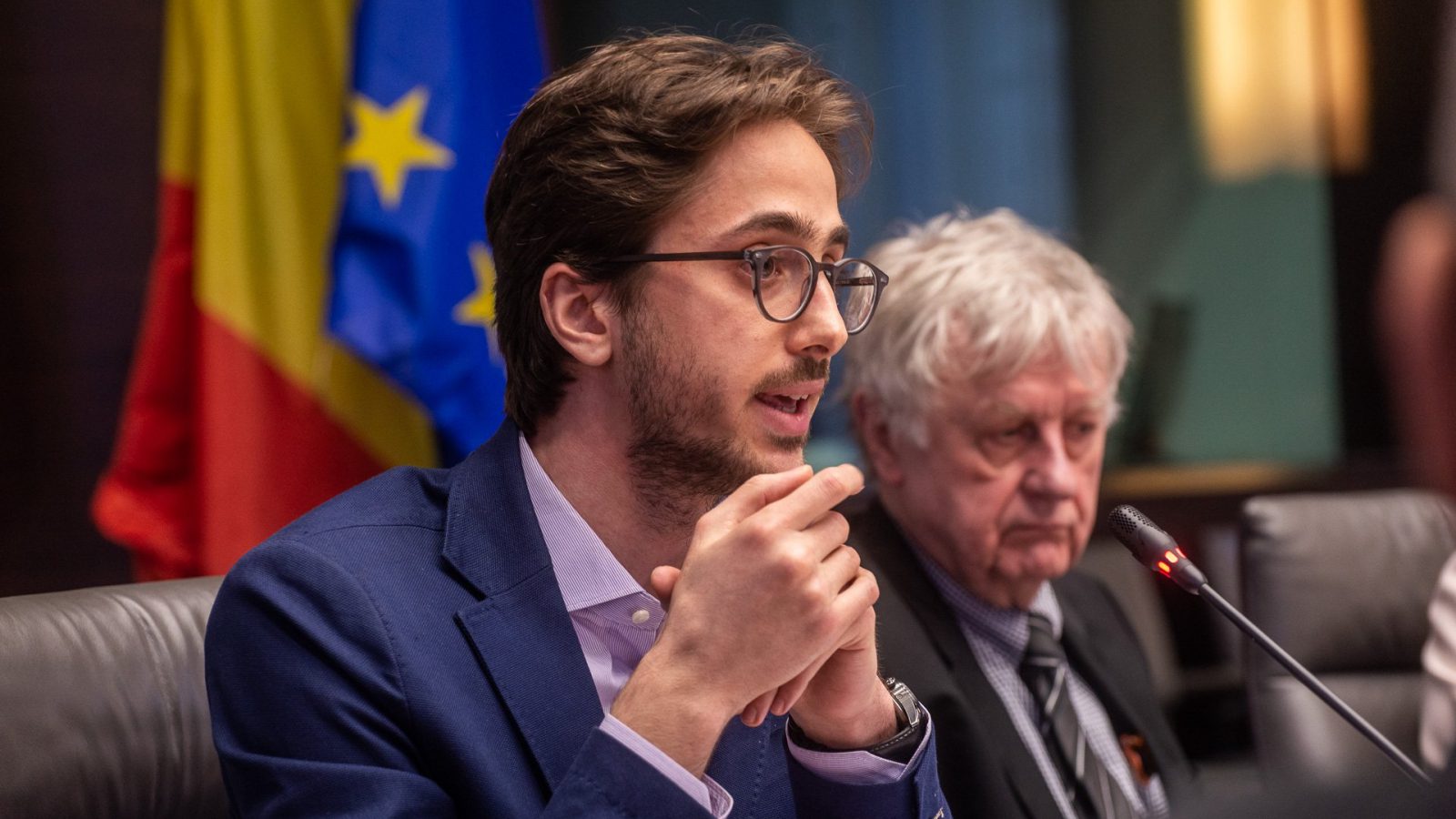 Omar argues the term “Haraga” is itself a repository of cultural meanings. It represents the burning of the immigrant’s past, and the involved risks in life as a result of the general despair and frustration experienced by the people of such region; leading them to, in case of survival, to evade their past and history by the actual burning of their identity papers before crossing the sea, and reaching the country of refuge, as well as the morale impact. Omar also refers to the incident of Tareq Ibn Zeyad when he burned his ships so as not to return, and to conquer Andalusia. Eventually, the term also refers to the destruction that extends to reach the immigrant’s system of social and personal relations to his home environment and surroundings. The immigrant leaves a vacuum in the place he leaves, which destabilises the balance of the family and Maghrebi society in general.

On her part, Daniela Huber, scientific coordinator of (MED)RESET project funded by the EU, considered that Omar’s winning for the paper he presented, is an evidence that the project has achieved its desired objectives: to attract intellectuals and writers to search and come out with studies that can benefit the future of the region. She believes that addressing the subject of the Maghrebi migration in the paper, in light of its limited understanding by the European society and the intransigence of the right-wing parties, and the demands to expel those migrants, is the best proof that the efforts of team of this project have not been without effect, but they were aimed in the right direction.
She added that the European Union has funded (MED)RESET with 2.5 Euros to form a body of research and study in the Middle East and create alternative horizons for the Middle East partnership based on the researchers. Researchers from Lebanon, Turkey, Tunisia, Algeria, Morocco, Italy, Germany, Qatar, Palestine and the United States have participated in “Young Writer Prize”.  The project has achieved its goal in its third and last year by engaging and connecting the people of the region, through the understanding of their common ideas and aspirations, and relying on their intellectuals.

Regarding the next phase of (MED)RESET projects, Daniela said: “We will make recommendations to the European Union for adopting a new project that creates a common base for the countries of Southern Europe and the Middle East and North Africa, providing scholarships for postgraduate studies related to the region in order to open the way for the researchers to provide papers, research and studies that may change the reality of the region, and help to develop its understanding on the first hand, and correct errors and stereotypes among European peoples and politicians on the other hand.”

The conclusion of the study of Omar Shanti is considered an important theory that writers, thinkers and even future politicians can depend on. In this context, Omar thanked his former professor Dr. Emrah Yildiz, as well as Dr. Elie Haddad from the Arabic Studies Centre, and the Jadaliyya website that published the scholarship, and he also thanked his parents. As for the exerted effort, Omar sent a paper that he was working on, tackling the subject of immigration in the Maghrebi literature, once he encountered the invitation for the participation in the prize via the Jadaliyya website; when he learned that he had qualified for the final stages, he began to develop his paper and convert it from five hundred words to five thousand words. This required great effort and time. 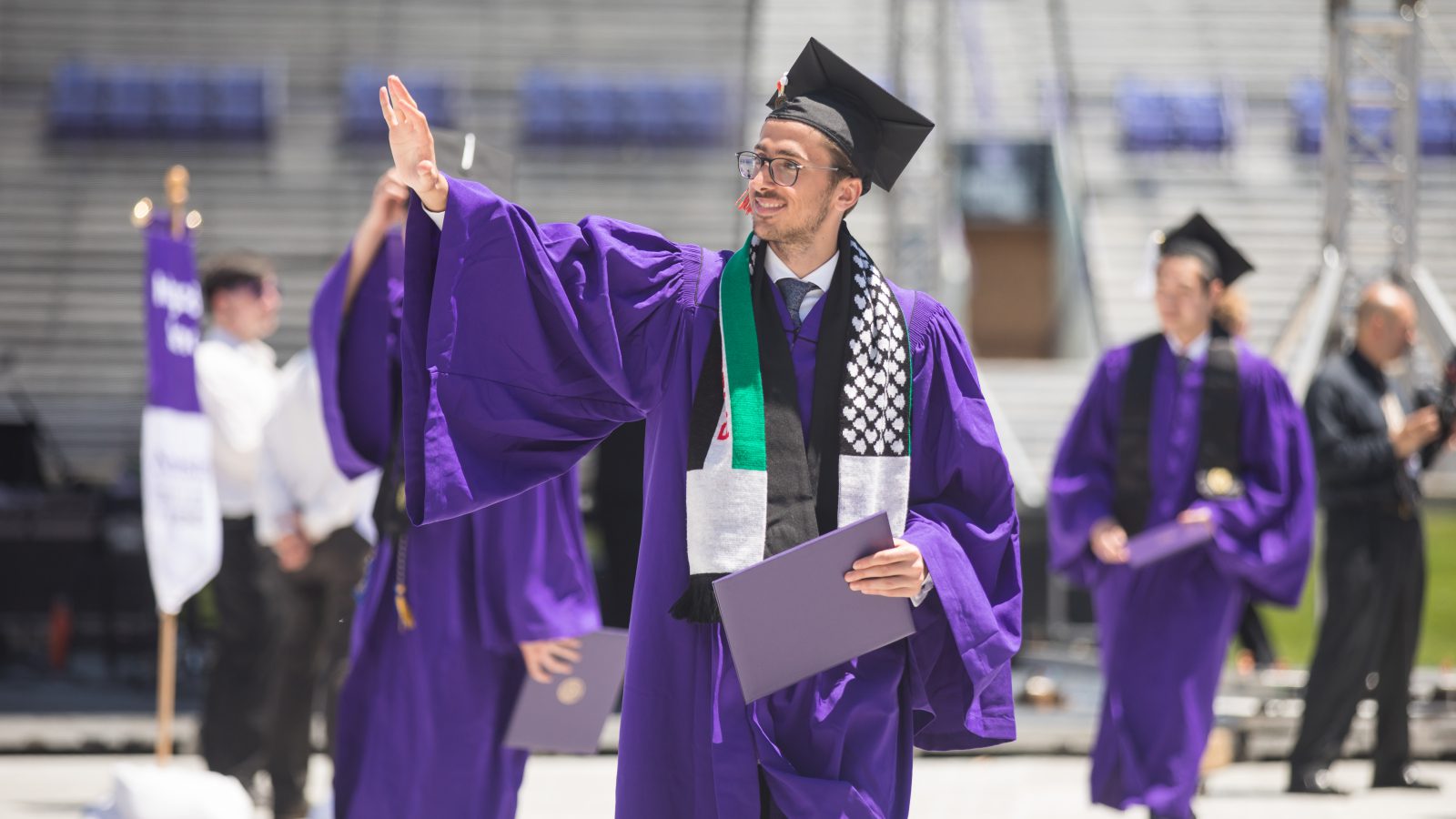 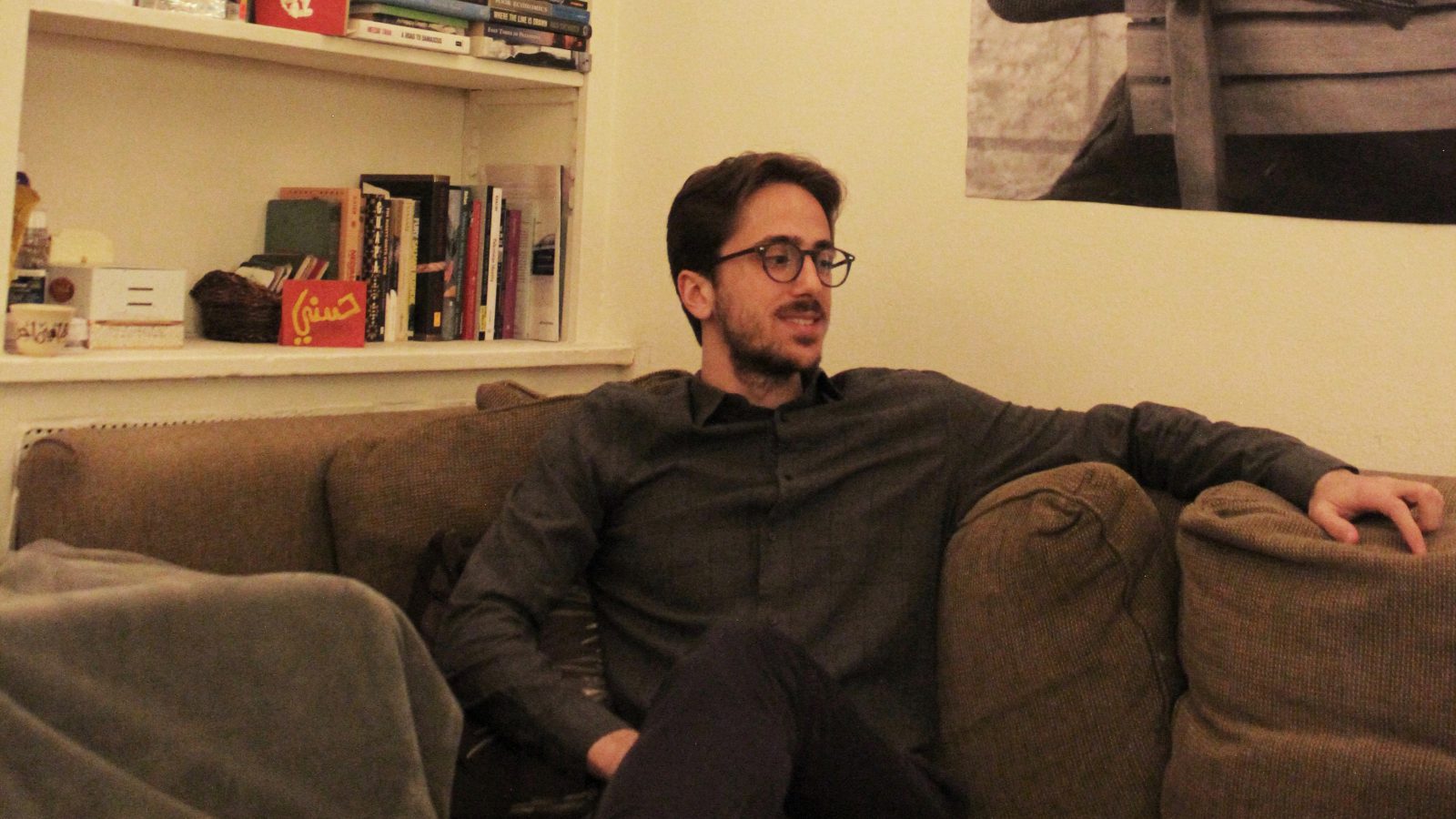 Omar has pointed out that he attained a dual-degree from  Northwestern University in Chicago, where he studied Computer Science, Economics and MENA studies.  He aims to use technology to reach as many people as possible, based on study and understanding of the geography and history of the region, and even the labour market that he wishes to specialise in.

Omar talked about the early stages of his university studies, when he had not yet developed a full view of what he wanted to focus on and did not recognise his passion for his favourite field. However, the war on Gaza in 2014 and the extent of fallacies and falsifications in the media, and the strongly misinformed views of his peers was a milestone in his life and scientific and cultural journey. Thus, this led him to conduct in-depth studies on the history of the region, and to return in the past, connecting the old history with the modern one, in order to extend his knowledge. Consequently, he turned to be a reader and researcher working eagerly to draw lessons, trying to come out with interrelated analyses, and hoping to reach solutions based on knowledge and research. He identified Edward Said and Ali Abunimah among his heroes of this period. As for his own reality, Omar considered that every Palestinian in the world, including himself, is a special alienation story, each one of them sharing the same matter of colonialism, forced migration, poverty, ignorance and oppression. He shares the result of such stories of alienation, anxiety and long wait. Indeed, this is a common factor between the Maghrebi and Palestinian peoples, and therefore, makes him able to describe that suffering better.


Omar stressed that this opportunity offered to him and to the participating youth by the European Union, enabled him to crystallise, arrange and develop his ideas, which expanded his circle of relations that can achieve great future opportunities for him; and this, in his opinion, is priceless!
(MED)RESET project, and in Omar’s own opinion, is considered a serious attempt to create a basis for cooperation among the class of researchers and academics, to discuss the issues of the region, and that did not happen before by such funding or enthusiasm. “The idea is that there have never been joint researches involving Arab countries from the Middle East, Africa and Europe, Omar says, “Thus, (MED)RESET project comes to create an educational foundation to launch studies, research and mutual cooperation in order to rebuild the character of the Middle East and reunite it.”

Omar is looking forward to building bridges of understanding between Europe, the Arab Maghreb and the Middle East, and finding solutions to the root causes of illegal immigration in the long term. As for the short term, Omar wants to spread the reality of the suffering of these immigrants and centre Maghrebi voices in this conversation. He also dreams of returning to the Arab world to establish a technological corporation that takes into consideration the significance of the history and its political effects, and which can have a positive impact on the region and their citizens for a decent, more secure and stable life. Omar considered that the moral value for winning the European Union “Young Writer Prize” is the best he has achieved so far due to the moral value of the prize in the literary and research forums as well as the opportunity it provided him to centre excluded voices from the Maghreb.

About the Prize Ceremony