Financial independence can considerably improve the standard of living of rural women in Egypt. The lives of several women of an Egyptian Delta village have changed since their carpets began selling internationally thanks to the EU’s “Spring Forward for Women” project, which, in association with UN Women, provides financial and political support to Egyptian women. A journalist from the EU Neighbours South programme visited some women for whom the project has showed the way to financial independence.  She tells us their story. 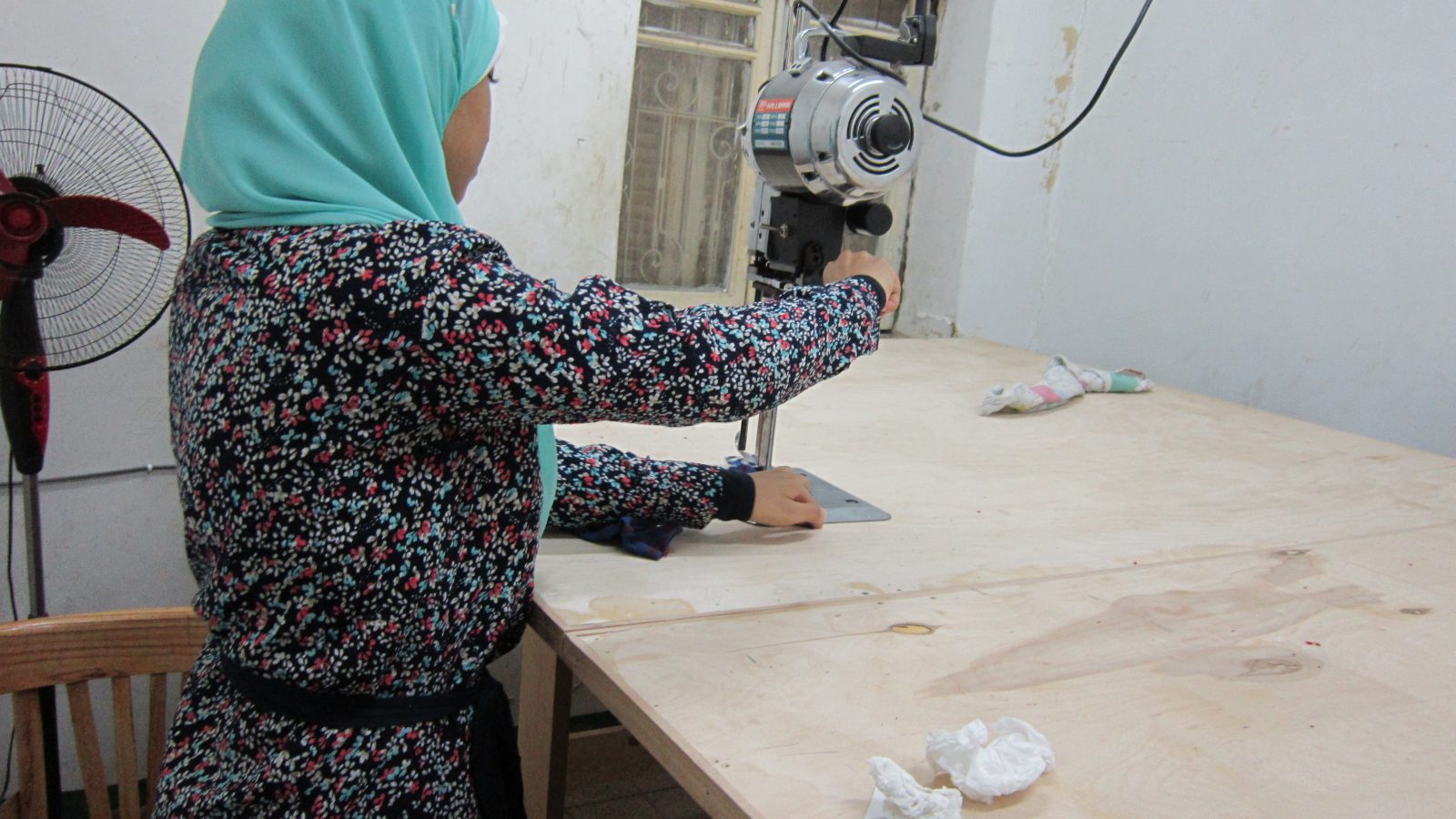 Financial independence can considerably improve the standard of living of rural…

Text and photos by Dalia Chams

The Egyptian Delta – The loom fits nicely in the peasant home, right beside the television, which shows Indian films non-stop. Wajida is a fan of Bollywood productions. She watches them while working on the Ispahan carpet she started two months ago. Despite fairly frequent power cuts and a relatively limited telephone network, the rudimentary village of Saquiet Abou Chaara, with some 20,000 inhabitants, is renowned for its silk carpets. Residents have learned the trade since the 1950s when two weavers went to work in the capital about 40 km away, about an hour and a half by road.

Wajida began to learn the secrets of the art of weaving at the age of six or seven in her uncles’ workshop. However, this is the first time that she is creating this type of Persian plant motif. She normally creates traditional motifs with the names of God or the tree of life, like many of her colleagues in the village. But this time, the association of hand-made carpet weavers provided her with silk and a loom and asked her to create the Ispahan design, specifying the colours, the size of the carpet and the number of knots, set at 64 per centimetre. “We supervise the work of the sixty women who work with us based on the standards and tastes of the international market to be able to sell their carpets, which are of high quality,” says Saïd Sadek, Secretary General of the association of carpet weavers.

“The association provides the women with looms and silk thread with the help of a contribution of no more than 15% of their share,” Sadek explains. “The association buys the first carpet for 5,600 Egyptian pounds (EGP) per metre. Previously, major carpet producers and exporters paid 3,000 EGP per metre. They took advantage of the situation because the weavers didn’t have production tools. They paid a price below market in exchange for the supply of thread and looms. The women’s situation was difficult, especially because sales fell drastically as a result of a drop in tourism. Now, after finishing and selling their first carpet at the agreed price, the women have enough material to make a second carpet, which they can sell independently of the association and of the project. By this time they have acquired know-how and the ability to navigate the market and buy silk thread with the money from the first carpet. They already have a loom and know international prices.  It’s the start of female entrepreneurship,” adds Saïd Sadek, whose association of carpet weavers provides the beneficiaries of the programme with work patterns: each graph paper square corresponds to a knot made by the weaver.

The local association was founded in 2006. It works with the Social Fund for Development implemented by the Egyptian Government, which cooperates with UN Women as part of the Spring Forward for Women project funded by the European Union, which has allocated €1.2 million to Egypt over three years. The goal of the project is to promote the participation of women in the economy in the southern Mediterranean and in politics and decision-making. It had a total budget of €8.2 million for 2013-2016 and it has regional reach as well as specific activities in five countries: Egypt, Palestine, Tunisia, Libya and Jordan.

“Women empowerment and gender equality are on top of the European Union agenda. We are committed to supporting women in Egypt as elsewhere through our regional and bilateral programmes. Since 2012 the ‘Spring Forward’ regional programme has sought to improve the access of marginalised women to economic opportunities in Egypt,” said the Chargé d’ Affaires a.i. of the EU Delegation to Egypt, Reinhold Brender, adding: “’Spring Forward’ helped many women enhance their living conditions by means of economic empowerment. Such initiatives can have a lot of impact, especially if they are scaled up.  The potential contribution of Egyptian women to economic and public life is undoubtedly significant, bearing in mind that women in Egypt constitute almost 50% of the population and that a large majority of 70% are less than 40 years old. The European Union works closely with its partners in Egypt to help the country exploit the benefits of the big potential that women represent.”

The Iranian bôteh flower motifs that Wajida, Fatma, Nagafa and the other women of the town are weaving, generally in pairs, represent the union of man and woman in the carpet. They often wait for the return of their husbands, who work in a factory, to make the carpet together. At times, a third person, their child, joins them during their free time.

Engy Amin, the project manager, is very happy about this. In the UN Women’s offices in Maadi, far from the village’s dirt tracks, she affirms that: “Our role is to carry out the project in the field, in cooperation with NGOs and local entities, to help the women become more autonomous. The economic aspect of the programme works to reduce the unemployment rate among women, increase their skills and provide them with micro-loans. We’ve helped 80 papyrus paper artisans in Charquiya, 200 women at home who peel artichokes in Beheira, 200 milk sellers in Beni Suef and 60 carpet weavers in Menoufia.” She continues, explaining the political aspect of the project: “We recognise the role of women in the transition process under way in the region and try to promote a network of women parliamentarians (89 out of the 596 members of the Egyptian parliament). We also organised internships for 1,500 students from eleven Egyptian universities, encouraging them to take part in civil and social development.“

Akram Ibrahim and Yasmine Heikal are fourth-year Polytechnic students at Ain Chams University who attended the training sessions. They set up a sewing workshop with their colleagues for the benefit of the women of the informal Ezbet Abou Qarn district in the old city of Cairo where they make T-shirts close to home.  “Their husbands forbid them from working outside the home, because the police don’t patrol the neighbourhood. At first, they were each asked to do a portion of the work for two EGP per T-shirt with the assistance of the Achanek Ya Baladi association. However, when our project was selected to be part of the Spring Forward for Women project, we received 15,000 EGP to rent a small apartment and buy sewing machines,” say the two students who have learned to better manage their project and ensure its survival. They’re waiting for their next order.

To find out more