Himaya (Protection): For a justice system that protects children

20,000 children every year come into conflict with the law, over 7000 are victims of violence, 2000 are taken into care under the Kafala Law (on the care of abandoned or institutionalised children), 1000 children are placed in child protection centres and overall, 100,000 children are brought into contact with the civil justice system. 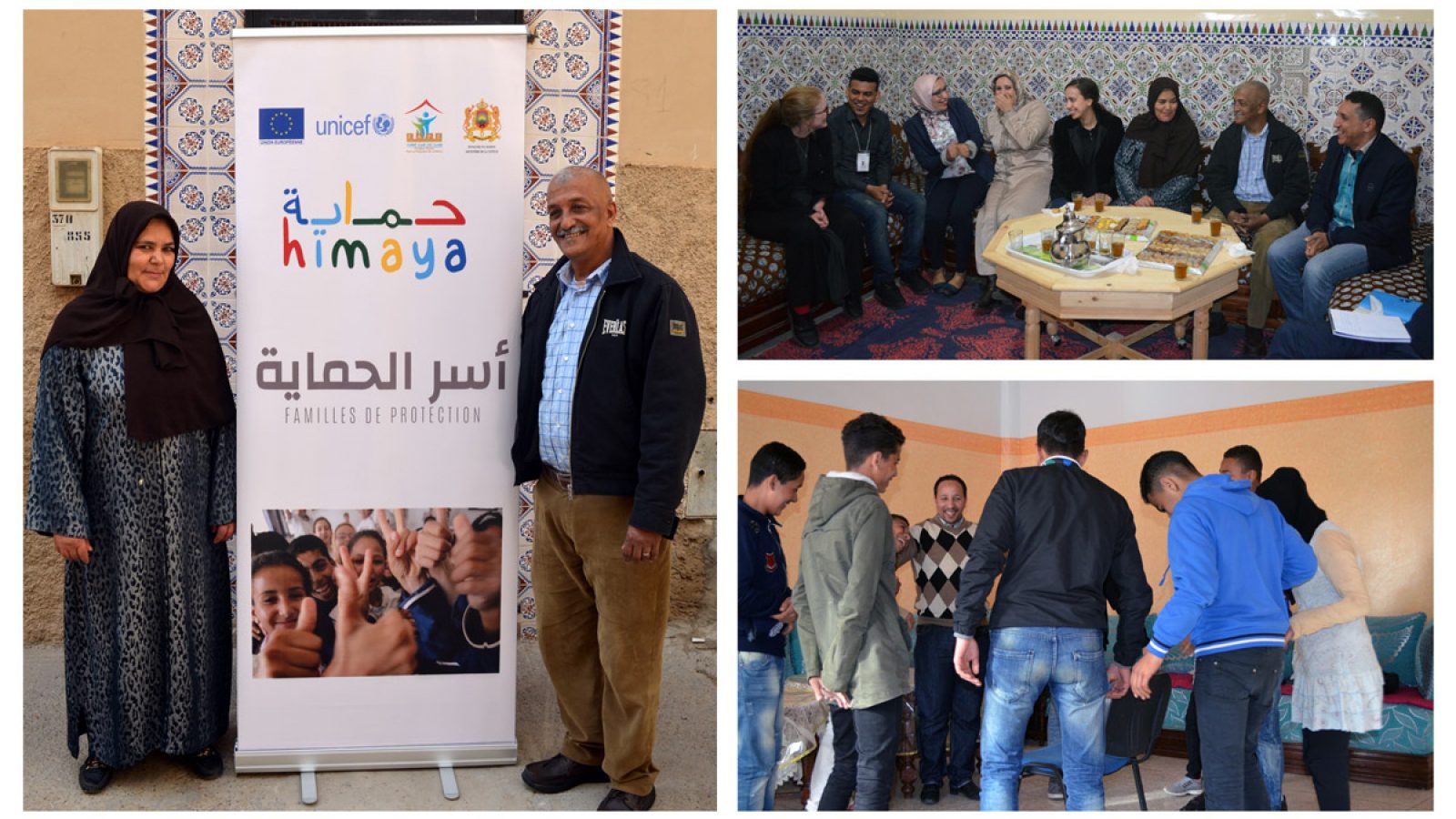 In order to help these vulnerable young people, children who are victims or witnesses of violence or who come into contact with the civil or criminal justice system, the United Nations Children’s Fund (UNICEF) has developed a project entitled “Himaya- Better access to justice for children”, with financial support from the European Union, which spans three years (2016-2019). Through a broad partnership with the Moroccan Ministry of Justice, the leadership of the prosecution service and the Ministry of Youth and Sports, as well as public bodies and civil society organisations, the project aims to steer the judicial system towards an approach that meets the needs of children in conflict with the law, to provide children who have been victims or witnesses with protection in line with the norms of the International Convention on the Rights of the Child, and to prioritise the best interests of the child when applying the Personal Status Code and other laws concerning children.

The Amane Child Protection Foundation in Taroudant (FAPE) is one of the associations working in partnership with the “Himaya” project to implement the “foster families” component of the plan. According to Sophia Booth, a young Brit who has lived in the city and worked for FAPE for almost two years and currently oversees the coordination of the “Osar Al Himaya” (Protection Families) programme, “These children need care and the warmth of a family rather than being placed in an institution”.

The Foundation has launched an publicity campaign in Taroudant, Inezgane and Agadir, to raise awareness among families about taking in children in conflict with the law who need a foster placement. The campaign, which is still ongoing, has already reached 1600 people and succeeded in convincing 48 families to apply as foster carers. 9 of these families have benefitted from training sessions and 2 of them are now reaching the final stage of a rigorous process established by FAPE, before a child is removed from one of the Foundation’s partner centres and placed in a protection family.

Sophia also adds that, “The Amane Foundation works to ensure children are placed with trustworthy people. On our part, this involves carrying out surveys and seeking character witnesses among acquaintances and neighbours of the applicant families before foster placements are finalised”.

This morning, at the Amane Foundation Headquarters, a residence nestled in the narrow streets of the ancient city of Taroudant, the association’s team, consisting, in addition to Sophia, of its president and three social workers (two young women and one young man) met Yemna and her husband Abdelhamid, and another parent, who all hope to foster a child. Yemna and Abdelhamid appear very happy and Yemna told us she had “learnt a lot about raising children and how to act around them from the training session”. As for Abdelhamid, he proudly declares, “Thanks to God we have managed to successfully raise three children. Selma has completed her economics degree and Sami is currently studying the same subject, while our youngest, Anas, will sit the baccalaureate this year”. Yemna adds, “Now that our children are grown up, why not foster a child who needs a family?”.

The Foundation takes care to maintain constant contact with the judges and all other parties involved in the cases of children in difficulty so that the success of its “Osar Al Himaya” programme encourages families to foster children from troubled backgrounds.

Not far from Taroudant lies Agadir, capital of the Souss-Massa region, where a tourism boom, modern agriculture and a flourishing fisheries sector coexist with social exclusion and economic hardship, affecting a broad section of society, and where the first victims are children. Faced with this situation, several associations and children’s homes are working shoulder to shoulder with two child protection centres run by the Ministry of Youth and Sports, which are among the main partners of the “Himaya” project.

Under this project, educators working in the two centres have benefitted from training sessions on communication techniques, conflict resolution and arbitration, provided by Moroccan and international experts under the technical supervision of UNICEF.

Karim Hanfi, director of the Child Protection Centre that takes in girls in difficult situations spoke to us about the impact of this training on educational activities at the Centre, saying, “The training sessions have supported us in our efforts to promote discussion and arbitration in order to resolve disputes arising between the residents. In order to involve the latter, we have established a Committee consisting of girls elected by their peers, which is responsible for resolving disputes and contributes to the planning of educational and sporting activities”.

While the residents, the majority of whom were placed in the centre by a judge for their protection as a result of difficult circumstances, are divided between a range of informal and vocational courses and primary and secondary schools, the case of Hanene stands out, “When I was placed in care, I had dropped out of school, so I took the first year of informal education. The following year, I was able to join year three of primary education and I continued my studies until I passed my baccalaureate. I was pleasantly surprised when I learnt that the International University of Agadir had accepted the application for a student grant submitted by the Centre”. It is worth noting that courses at the University where Hanene has been admitted are costly, but the case put forward by centre staff and the University’s open attitude towards young people from troubled backgrounds have helped make her dream a reality. Hanene is currently studying economics and still lives at the centre, where she also works as an educational assistant.

At the child protection centre for boys, adjacent to the girls’ centre, the director, Nawel Rais, is like a mother to every child. She does not deny the challenges of raising children under difficult circumstances, but she speaks with great pride of “her boys” who have completed their vocational courses and are preparing to leave the centre for new horizons. Samir is one of them. He has spent seven years at the centre, where he has learnt a trade. In a few months, he will leave the centre for Zakoura, where he will work in a fruit processing plant. Rachida, an educator at the centre, supported Samir during his time there and has benefitted from training sessions on active, person-focused listening and techniques for supporting communication with the children, organised as part of the “Himaya” project. Having praised Samir’s qualities, she goes on to say, “Truly listening to the residents and mediating fairly to resolve disputes often produces positive results. If we show the children love and they don’t feel they are being treated unfairly, they react in a positive way”.

The “Bayti” association for young people in difficult circumstances is the third partner of the “Himaya” project. Since it was founded in 1995, it has taken in almost 18,000 children and its centre in Casablanca welcomes an average of 500 disadvantaged children every day. “Bayti” chose to participate in the “Himaya” project principally through the plays that it uses as a means of pleading in favour of alternatives to custodial sentences in the case of minors. Indeed, a theatre troupe consisting of “Bayti” residents is currently rehearsing for a play that they will perform before judges and officials from the justice sector. Yamna Taltit, a leader at “Bayti” gives us a summary of the play, which tells the story of a police officer who arrests a child in the street and takes him to court. When the judge decides to place him in a child protection centre, the child shouts: “No, no, it’s against the International Convention on the Rights of the Child”. With this play, the children send a strong message to the decision makers: children should not be institutionalised.