Jordanian innovators breathe hope back into a Covid-19 stricken world

As the world seems to have been sent into freefall with the Covid-19 crisis, a group of Jordanian innovators has come together to bring hope to their community, by creating open source face shields and emergency respirators for healthcare workers and local hospitals. Engineers from the EU-funded Shamal Start project recently joined forces with the Crown Prince Foundation’s (CPF) TechWorks Initiative to respond to the Covid crisis in the most innovative and solidary way. 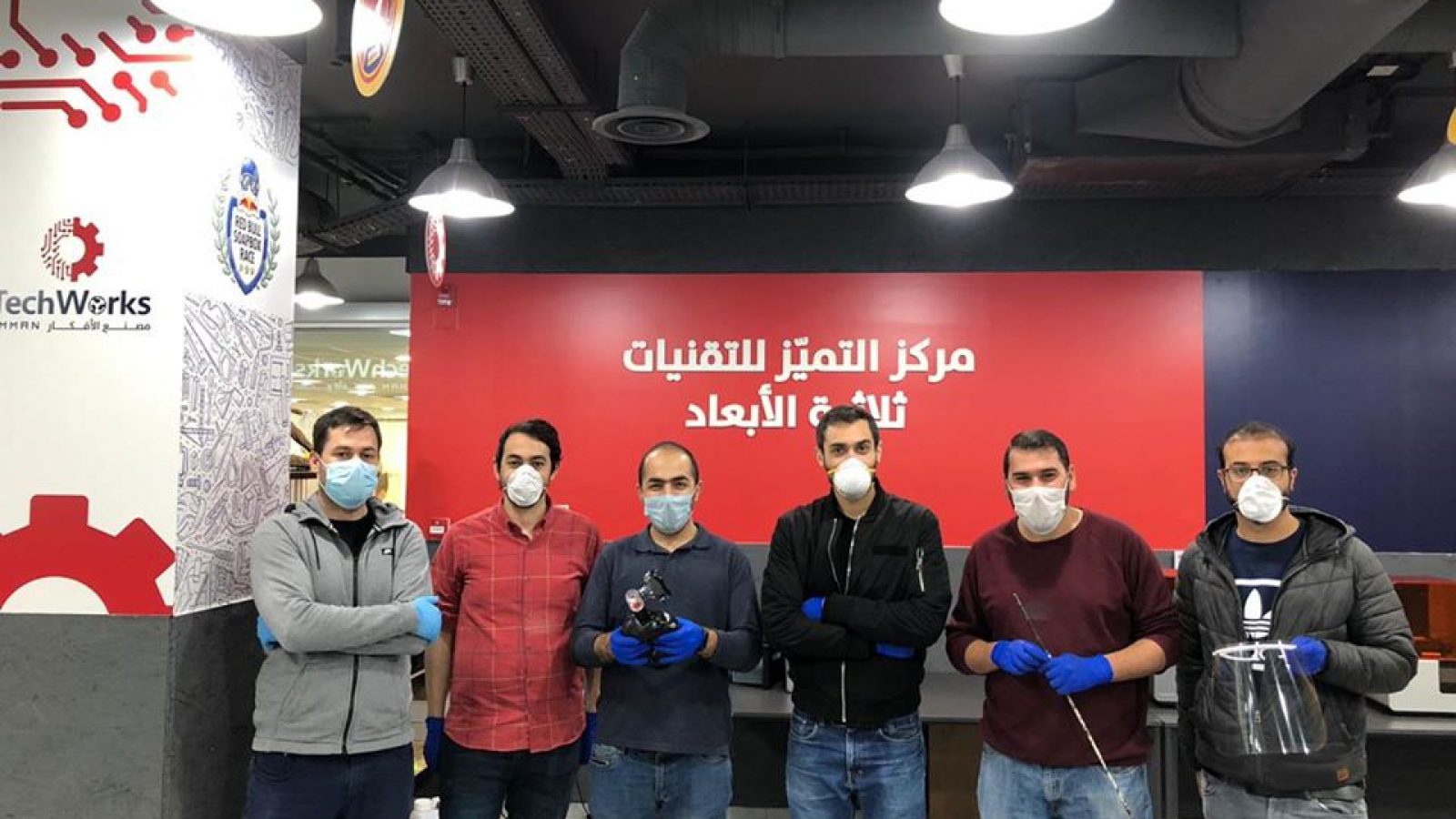 Innovators breathe hope back into a Covid-19 stricken world

“As an engineer, I always want to see my prototypes and creations used in real life. But, for the very first time, I really don’t,” explains Nadine Hasan Abu Tuhaimer, technical manager at ShamalStart’s Irbid Fablab in northern Jordan. The 26-year-old computer engineer is part of the team of young Jordanian innovators behind the unique inventions aimed at supporting the efforts of the Jordanian government in the fight against the coronavirus.

“When we saw what was happening in other big countries like Italy or Spain, we realised that we had to act fast and learn from their challenges if we wanted to prevent such a situation from repeating itself in Jordan.” Bracing themselves for the global pandemic, the young innovators started exchanging ideas as soon as the nationwide quarantine was announced.

“We acted very early on, and we strived to find fast and cost-effective solutions, through our collaboration with like-minded innovators at TechWorks, and through our contacts from the FabLab global network,” Nadine recalls, citing the core team members Amro Sawsan, Yazan Abu Dabaseh, Qusai Malahmeh, Murad Saadeh and Ahmad Fares. 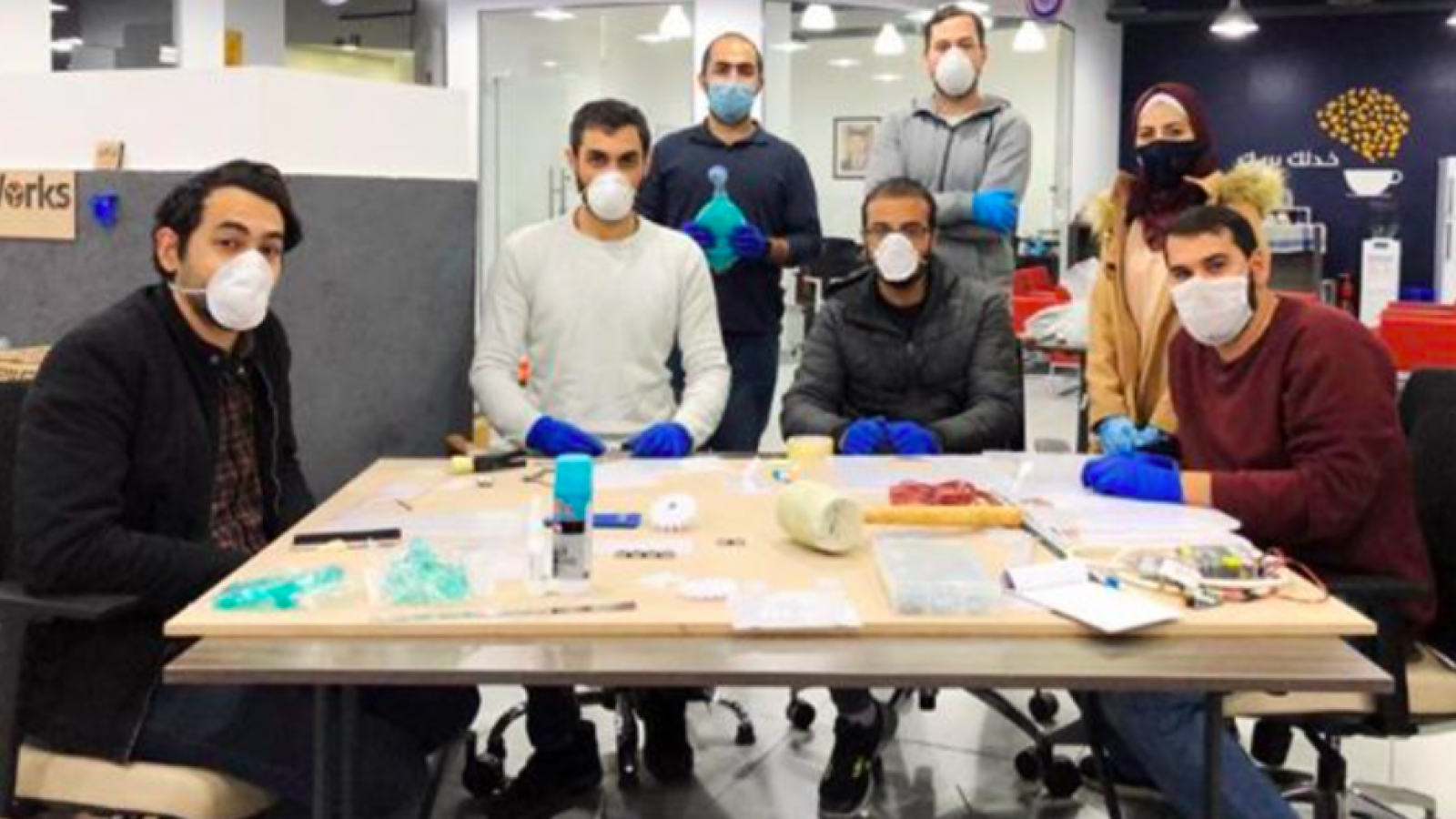 The power of Jordan’s innovation ecosystem

The power of Jordan’s innovation ecosystem

The Director of TechWorks, Ismail Hakki, agrees. “Once the global pandemic situation was declared and Jordan applied the defence law, it was clear to me that this was the time for a prototyping lab such as TechWorks to shift gears and take action.”

TechWorks is the Crown Prince Foundation’s flagship innovation platform, a public, society-based digital Fabrication Laboratory (FabLab) with the mission of bringing together youth, ideas, and resources to unleash the power of Jordan’s innovation ecosystem. Through creating a sustainable, highly integrated ecosystem that encompasses the entire innovation process – from discovery and ideation through to design, development and commercialization – TechWorks seeks to support young innovators on multiple levels, enabling them to design, engineer, and manufacture just about anything. 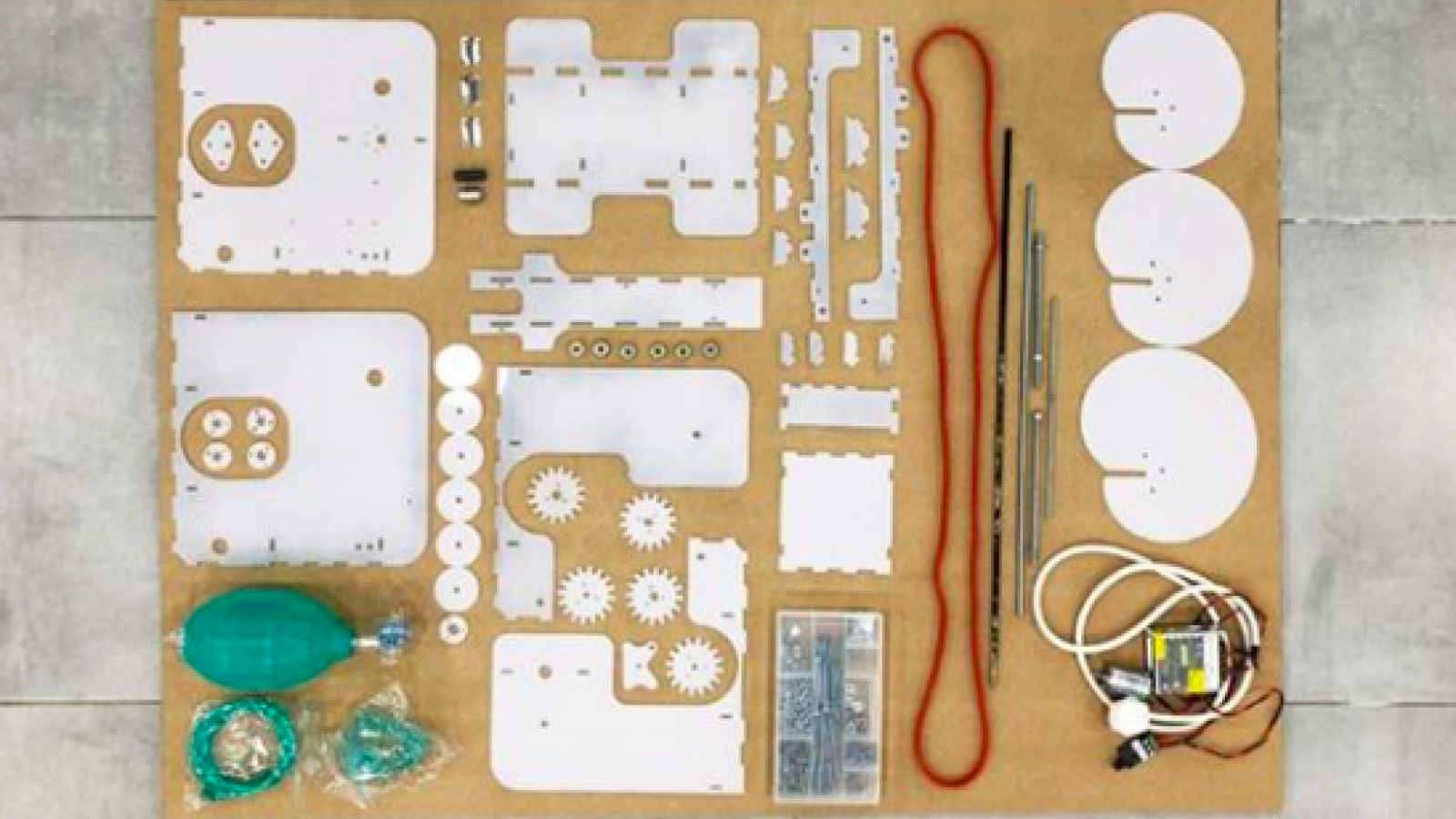 Solidarity steps up a gear

Solidarity steps up a gear

Through WhatsApp groups and online exchanges, the task force brainstormed ideas to support the Kingdom’s health workers and curb the impact of Covid-19. “It was not easy, because we were unable to meet up and we had to do everything from our own homes. But, as always in Jordan, everybody was ready to help,” Nadine remembers.

People from all walks of life plugged in: engineers, researchers, entrepreneurs, educators… Individuals from outside Jordan also started to contribute. “Everyone was working on whatever they could, and the collaboration grew much bigger very quickly.”

Ismail also recalls this collaborative spirit very fondly, him who, days into the lockdown, helped the ShamalStart team to obtain permits to join the TechWorks engineers at their lab.“We really saw this as yet another opportunity; to collaborate with Shamal Start, to build bridges, grow relationships, demonstrate good will and show the community that we -as fablabs- are partners and not competitors,” he stresses. 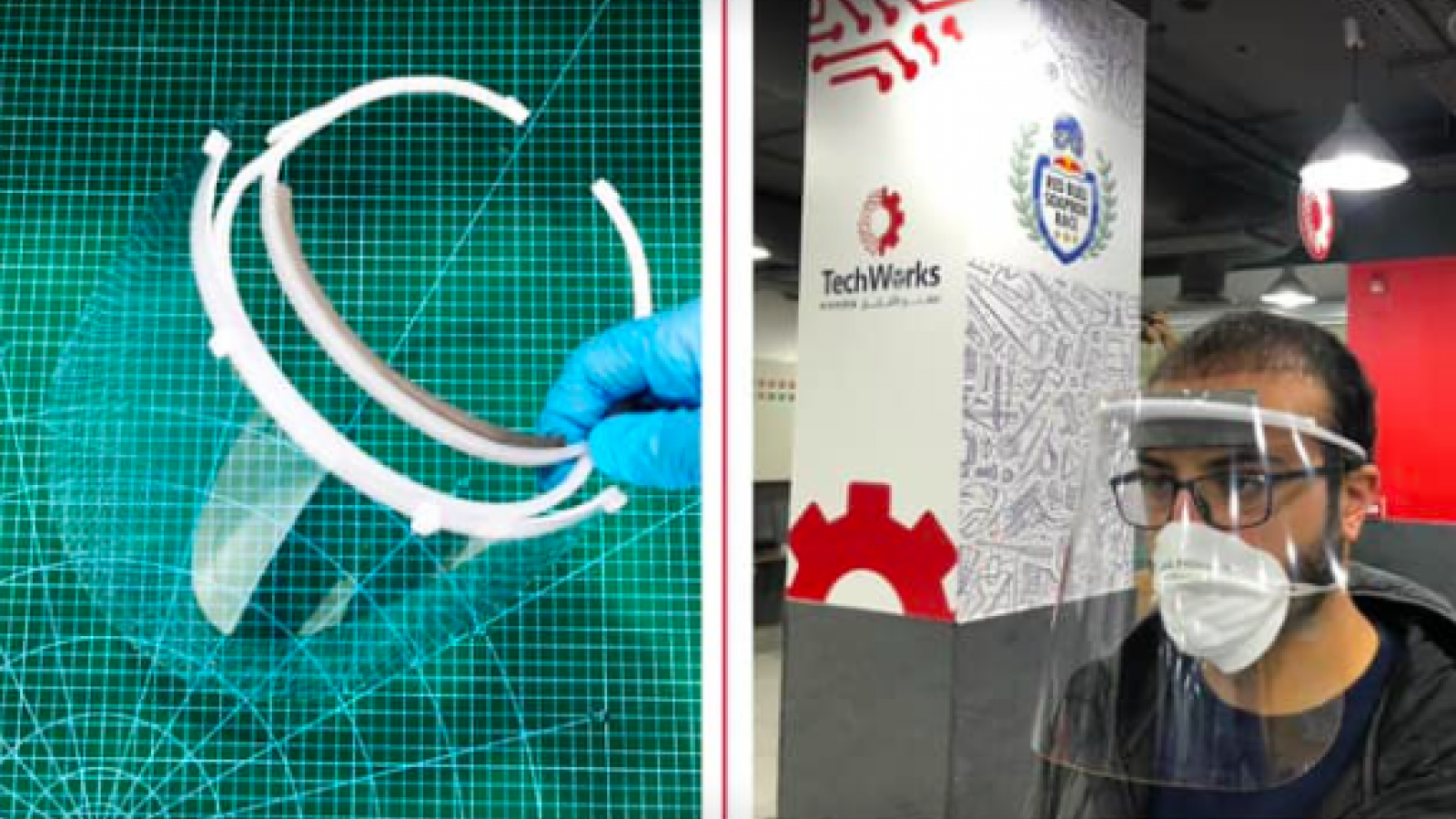 A new era in urgent innovation

A new era in urgent innovation

Supported by the CPF and local authorities, three ShamalStart engineers joined their TechWorks counterparts at their workshop, where they began developing their open source emergency respirator, or “Ambu bag automation device”.

The Ambu bag was based on the open source OxyGen design developed by the company Protofy.xyz and officially approved by the Spanish Agency for Medicines and Medical Devices to be used on Covid-19 patients, explains Nadine.“It was easier to start from an already approved design, but we still struggled to find the material needed to create the prototype.”

With the entire country on lockdown, the team had to get creative, and resorted to the huge wave of solidarity they had already generated.“We were constantly on WhatsApp, trying to collect that many screws from someone, or wires from another. We even had someone who brought us a motor from an old car wiper to complete the prototype!” she explains.“Of course, it is never ideal to use alternative material to create such devices, especially if we were to move to mass production, but that was all that we had at hand, and the situation is of unprecedented urgency.” 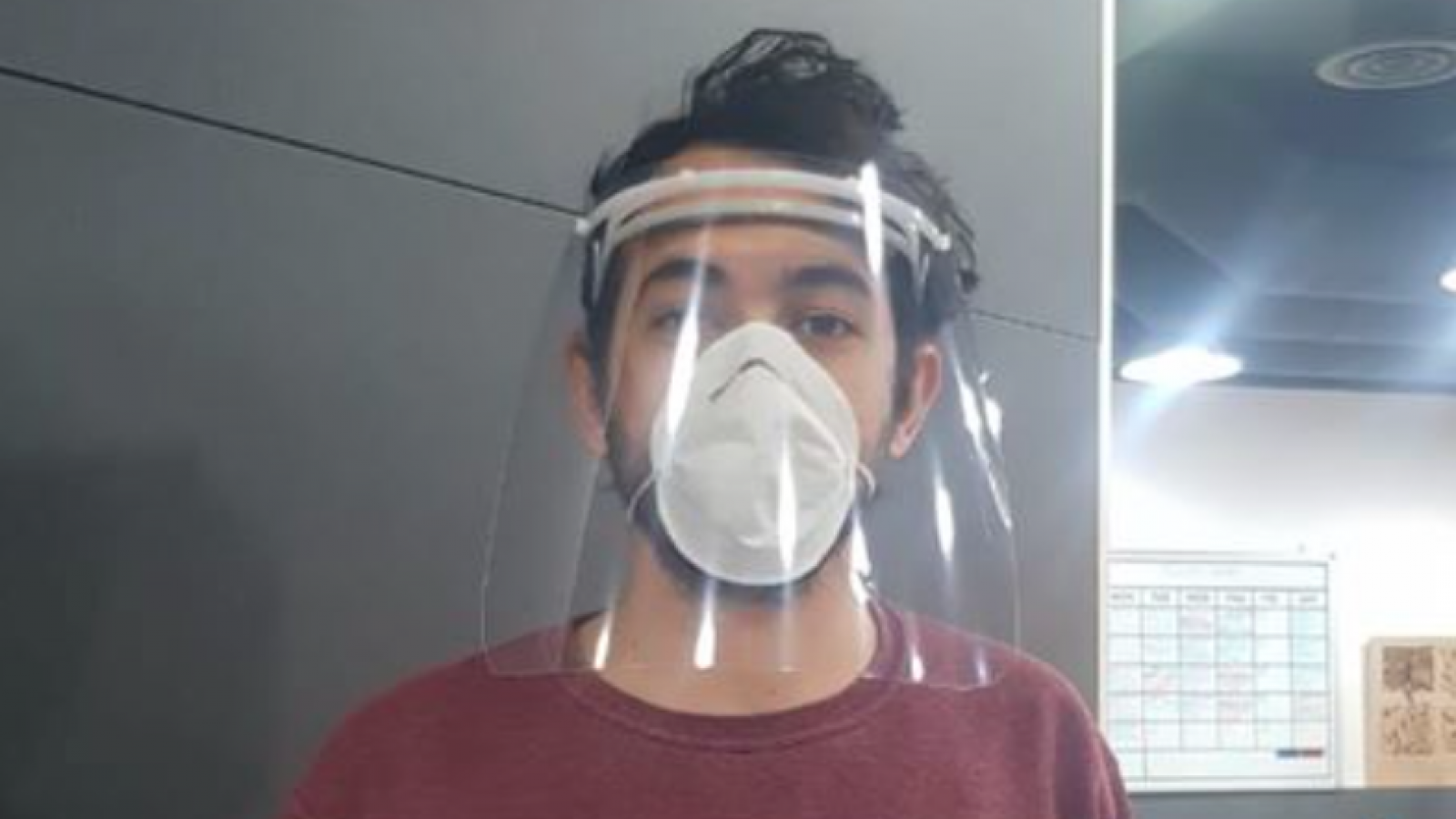 In only two days, the team managed to redesign the full machine, adapt it to the car wiper motor and come up with a cutting edge emergency respirator equipped with a built-in monitoring system transmitting the number of breaths to an online application.

“We went through so many trials, starting with our initial idea to use a 3D printer to produce face shields,” Nadine recalls, explaining that the costly and time consuming process was inadequate for the emergency situation. The team then tried using the design released by Trotec, an Austria-based company specialising in laser cutting.

With support from the start up 3DU, usually specialised in scientific and 3D technology education, and the Jordan University of Science and Technology (JUST), the face shields will be provided to four local hospitals, including the King Abdullah University Hospital, the largest medical structure in northern Jordan.

As for the Ambu bag actuator and circuit flow splitters, they are currently being examined by the King Abdullah II Design and Development Bureau (KADDB) and the Royal Scientific Society (RSS), before they can be officially approved and mass produced. 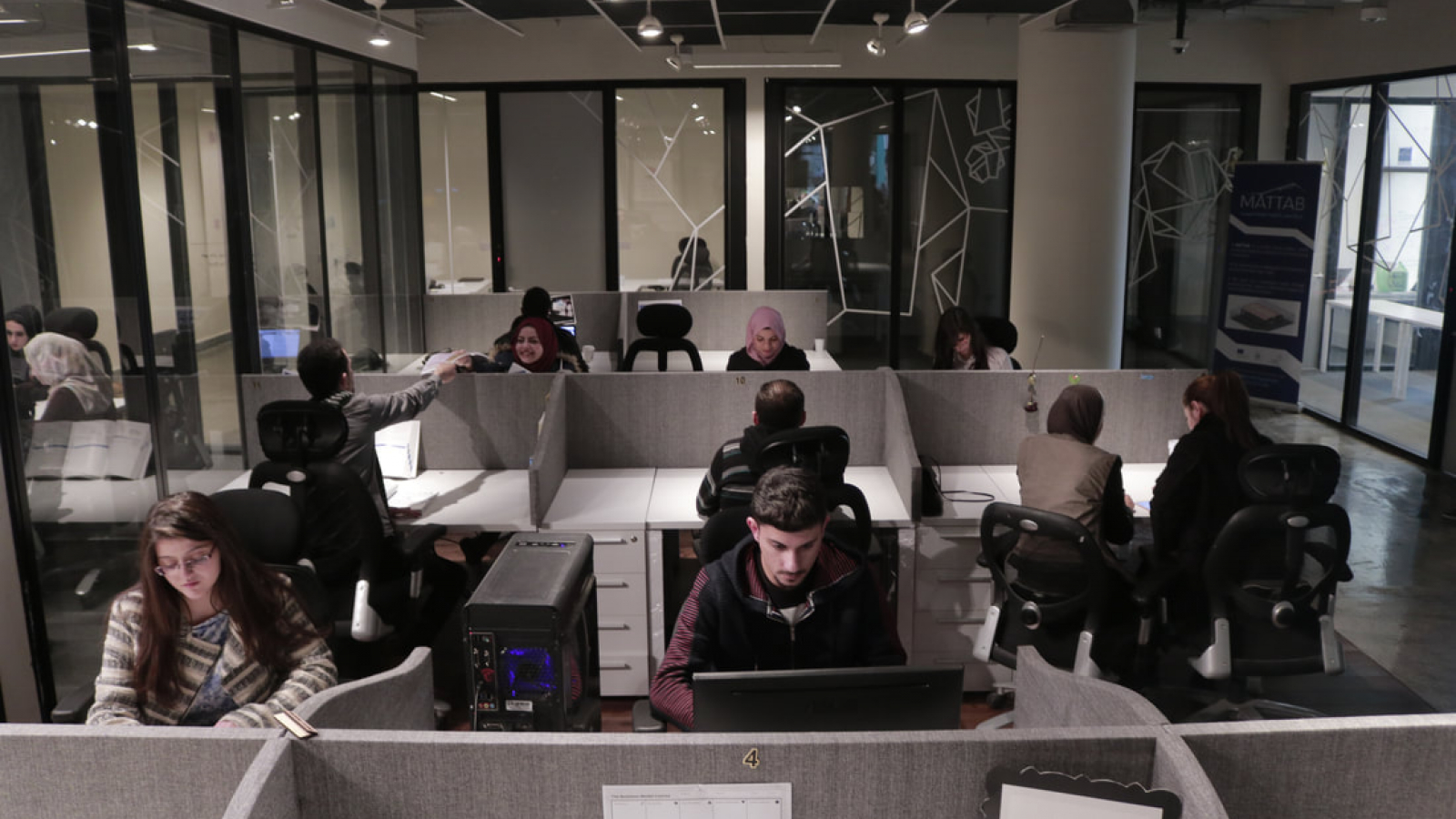 Messages of hope for the future

Messages of hope for the future

“We really hope that we will not have to use these respirators, and that the situation improves here in Jordan,” Nadine stresses, noting that, if such a positive outcome was to happen, the prototypes would still be useful to support the countries that are worst affected by the pandemic in the MENA region.

Hope also prevails at TechWorks, with Ismail stating that the combined effort will also pave the way for future innovative collaboration with Shamal Start. “We will continue to involve Shamal Start in our journey and we are proud to have taken the first steps in collaborating with them hoping that this serves as an opener for future collaboration.

”Irbid’s Fablab is part of the EU-funded Luminus ShamalStart project, which was established in 2016 in collaboration with RSS-iPark. The leading hardware business accelerator seeks to provide innovators and entrepreneurs with a comprehensive ecosystem to turn their cutting-edge ideas into sustainable businesses.

Shamal Start has supported numerous local startups, some of which have grown to become regional actors in the entrepreneurial ecosystem. The EU support to Shamal Start is part of its long lasting commitment to supporting innovation and creativity as drivers of socio-economic development in Jordan.