USEK and the EU-funded CEDRO, a match made in environmental heaven

Université Saint-Esprit De Kaslik – (USEK) teams up with the European Union funded CEDRO project to implement a sustainable energy strategy at the university level and action plans to mitigate climate change. All this providing positive change to the university community at large.

Université Saint-Esprit De Kaslik – (USEK) is, on a late August day, buzzing with students shuttling between departments as they register courses and prepare for the upcoming semester which starts early September. The campus is busy, but also filled with energy that only youth can radiate. Students who had not seen each other all summer hug and kiss and catch up on their news as they meet with their advisors to coordinate the fall semester courses. Unseen to them are solar panels installed on top of the main building and the faculty of agriculture, as part of CEDRO a European Union (EU) funded initiative. 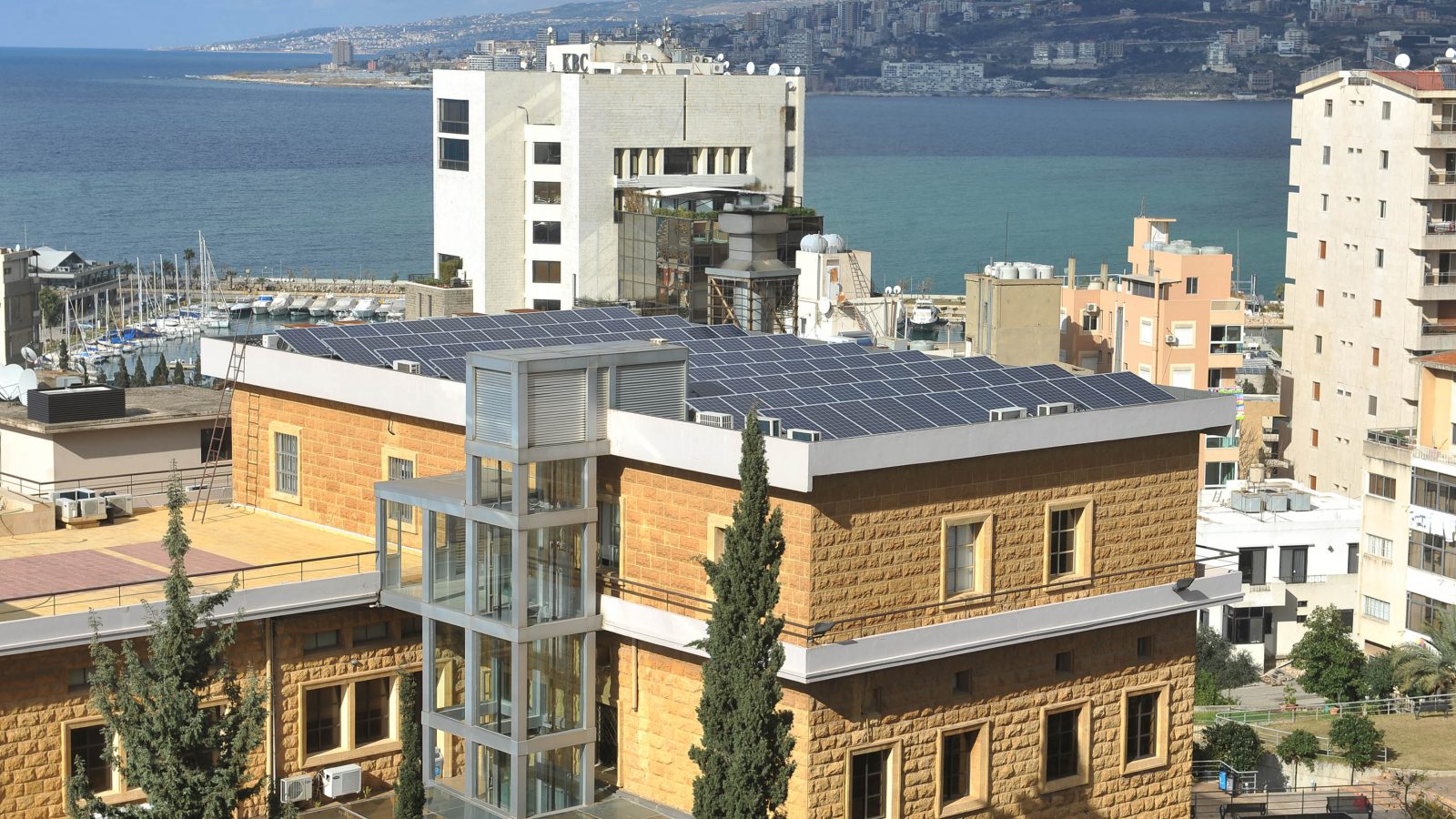 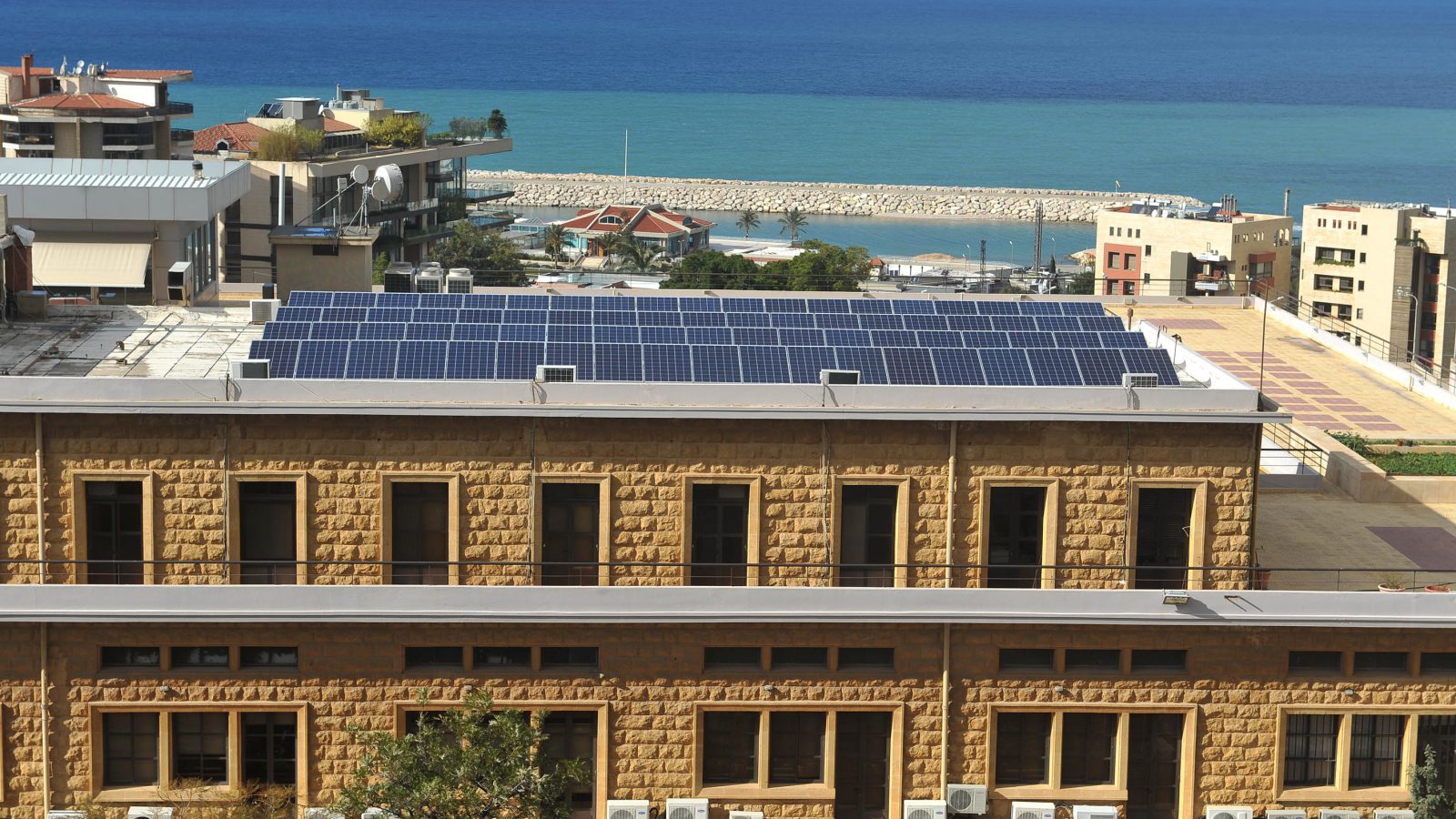 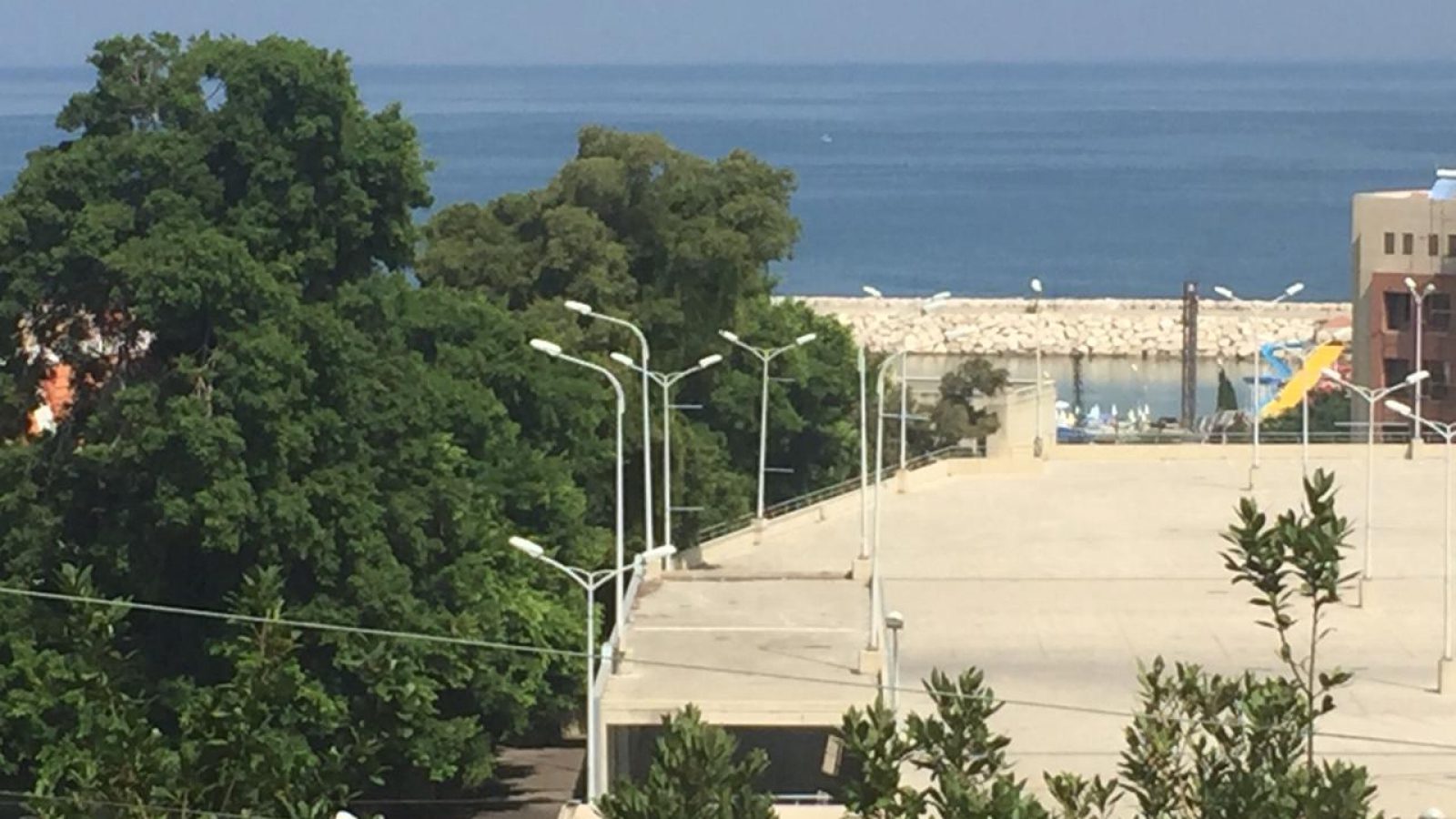 USEK at a glance

USEK is a private Catholic institution of higher education, which has been founded in 1938 by the Lebanese Maronite Order (LMO) and which has been governed by them since its inception. While having a glorious past, it does not sleep on its laurels and always strives for more achievements in the future as they use the fruitful present as a stepping stone – notably in the domain related to the environment.

Overlooking the Mediterranean Sea, on the coast of Mount Lebanon, the university boasts a lively main campus, full of greenery, and several architectural buildings stemming from different eras, yet mixing together in full harmony. Strolling through its campus, the lush vegetation protects one from the adverse effects of the burning Lebanese summer, but look closely and other signs of a broader environmental program can be seen: Recycling bins, sorting trash sings, eco-design projects left by entrepreneurial students and the list continues.

Pope Francis, in the second encyclical of his pontificate, Laudato Si, says it clearly: “I urgently appeal, then, for a new dialogue about how we are shaping the future of our planet. We need a conversation which includes everyone, since the environmental challenge we are undergoing, and its human roots, concern and affect us all.”

USEK, and not only because of its Catholic roots, took this to heart and has been implementing a rigorous environmental zero waste program, which allowed it to be elected number one green university in Lebanon according to the UI GreenMetric World University Rankings in 2017. 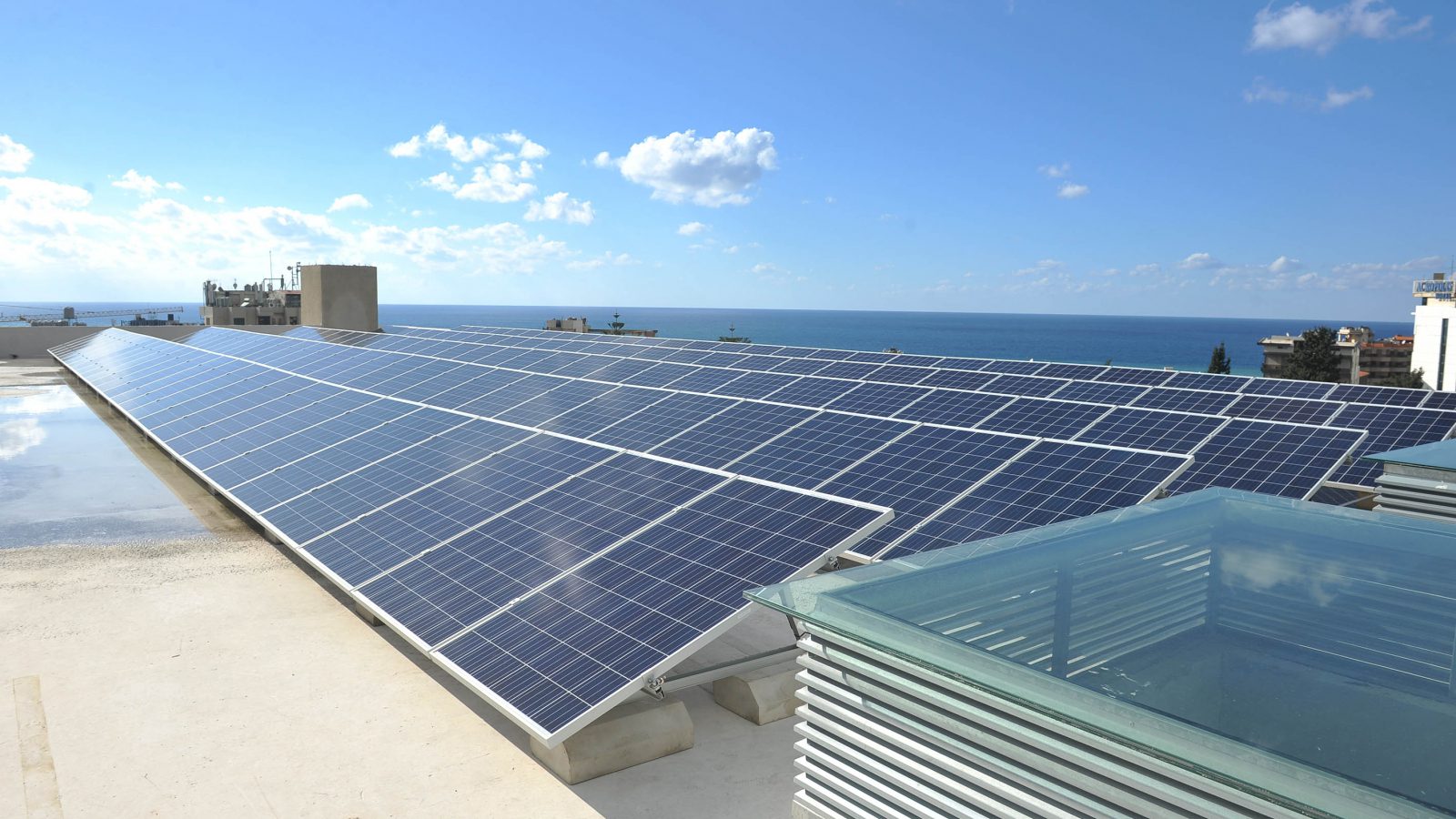 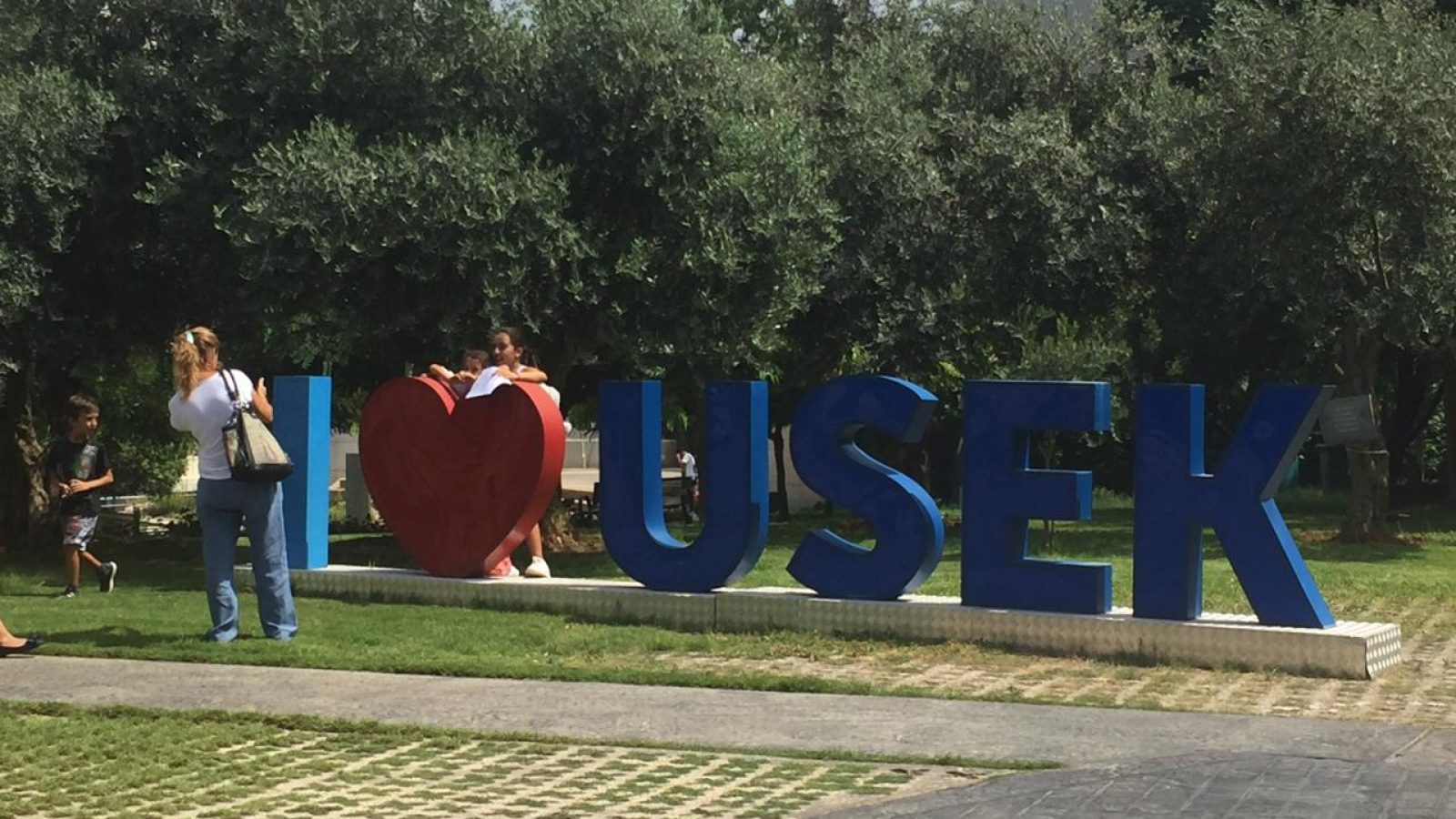 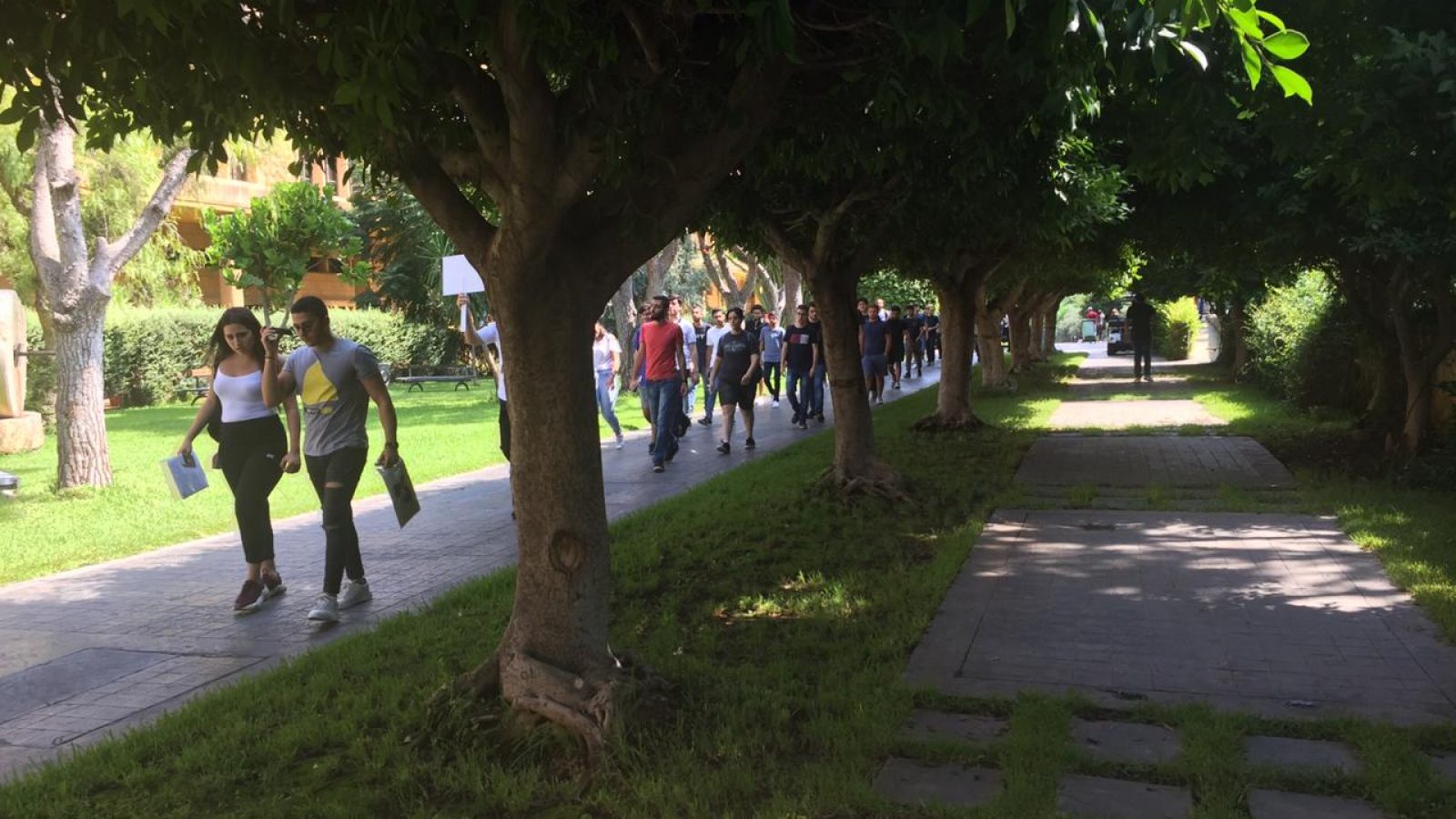 The CEDRO Phase 4 project was a five-year EU-funded project (January 2014 – August 2018) on renewable energy and energy efficiency implemented by the United Nations Development Programme (UNDP). Its main objective was to “green” the energy sector through the application of renewable energy and energy efficiency systems and measures across Lebanon’s several economic sectors.
Its objectives were to: (i) support the Ministry of Finance to lessen public and private financial burdens related to energy expenditure, reducing therefore income burden and increasing security of supply; (ii) support the Ministry of Energy and Water to promote renewable energy up to 12% of the energy mix by 2020 and increase energy efficiency by 5%; (iii) promote small-scale renewable energy sources through demonstration projects, capacity building and awareness-raising on the one hand, and analysis on renewable energy resources in terms of potential and policy recommendations; (iv) and enhance the drive towards a green economy, creating new ‘green’ jobs, particularly through engaging the private sector.
At USEK, the installed system has a capacity of 212 KWp, produces a yield of 275,575 kWh, saves 221 tons of CO2 emissions, and boasts an area of 1900 m2. That would be the same as what 45 cars produce annually in terms of CO2 emissions and its financial saving equals USD 44,092 a year. The system cost 195,000 USD and was financed at the rate of 50% from the EU and 50% from USEK through the National Energy Efficiency and Renewable Energy Action (NEEREA) loan. 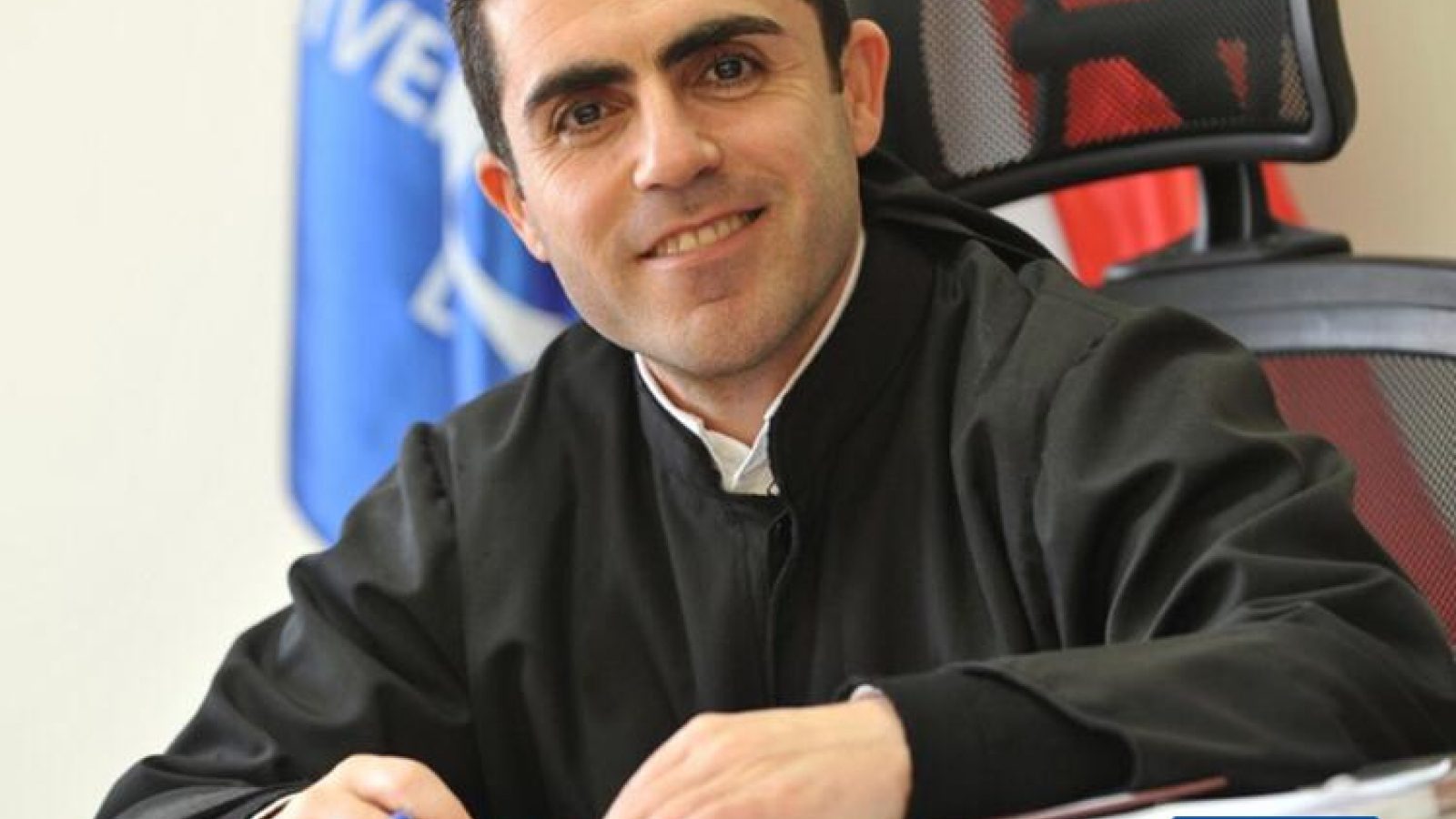 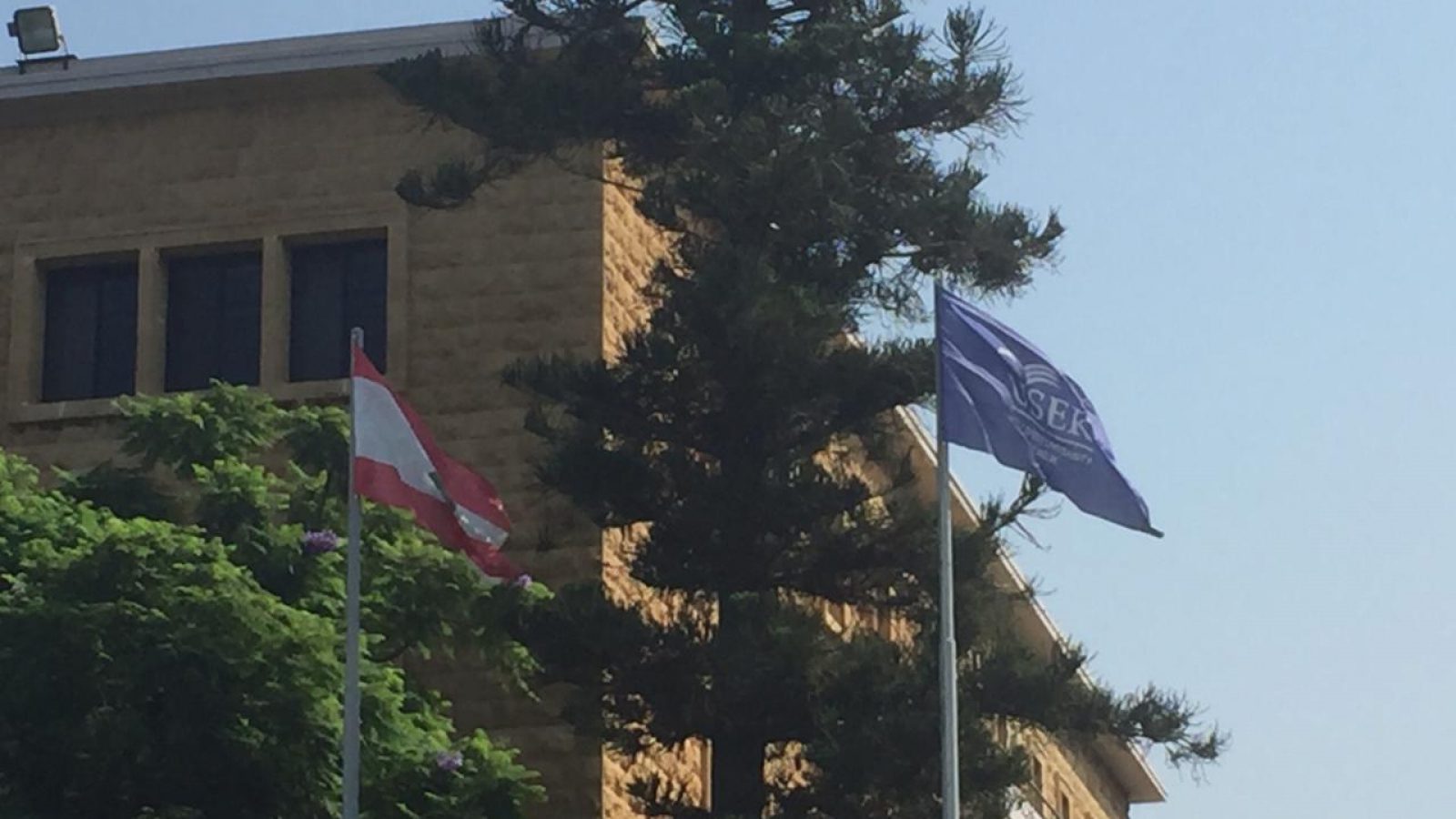 Born in 1970, Father Talal Hachem is the newly appointed President of USEK, he looks younger than his age, is affable, quite efficient but also has those soft leadership skills that makes the staff around him – oh, and he is prone to laughing often. Father Hachem has held several key academic positions at USEK where in 2013, he was appointed Dean of the School of Law, then Vice President for Community Life in 2016. In 2019 he was named President of the University.
Going as far back as 2013, Father Hachem, in one of his speeches at the university emphasized that: “Urban lifestyles greatly influence all relationships that we build with each other and with the land. Nevertheless, the development undertaken by the majority of third world countries has resulted in a massive migration phenomenon plus an increasing urban expansion, which has led to a serious environmental problem”.
The environmental issue has always been on the mind of the rector which makes the European Union funded CEDRO a perfect match for his personality and mode of thinking. It is not by chance that his first graduating class he summoned over had the motto of “Let’s Get to Work!” which reflects his practical and community-based ethos and mode of thinking.
“At USEK we believe university is not a matter of just degrees and courses, we are not graduating robots, but rather good responsible citizens, global citizens, and it is our job to raise their awareness, to make them grow and mature,” argues Father Hachem. “And not just in the small community, but the one at large as well,” he goes on. “We want those environmental values to accompany them, to enrich our students. It was part of the orientation session for new students this year as a matter of fact.” He thoughtfully adds: “Naturally it takes time, any change in mentality does, but this is idea of “this does not depend on me” – we need to eradicate it and make all our students, staff and faculty understand that we are in this together”.
“CEDRO was so important for us because it was the first pilot project after which the solid waste management facility came, it was the precursor that launched the rest of our activities. Actually, we moved aggressively with our environmental activities, we no longer print invite cards to our events and at this stage, our business cards are no longer using glossy paper which is not immediately recyclable. Sure, it will be in hundreds of years, but it is us – as humans who need nature, nature does not need us. And we are making sure through social media to keep our own graduate community close through outreach activities.” 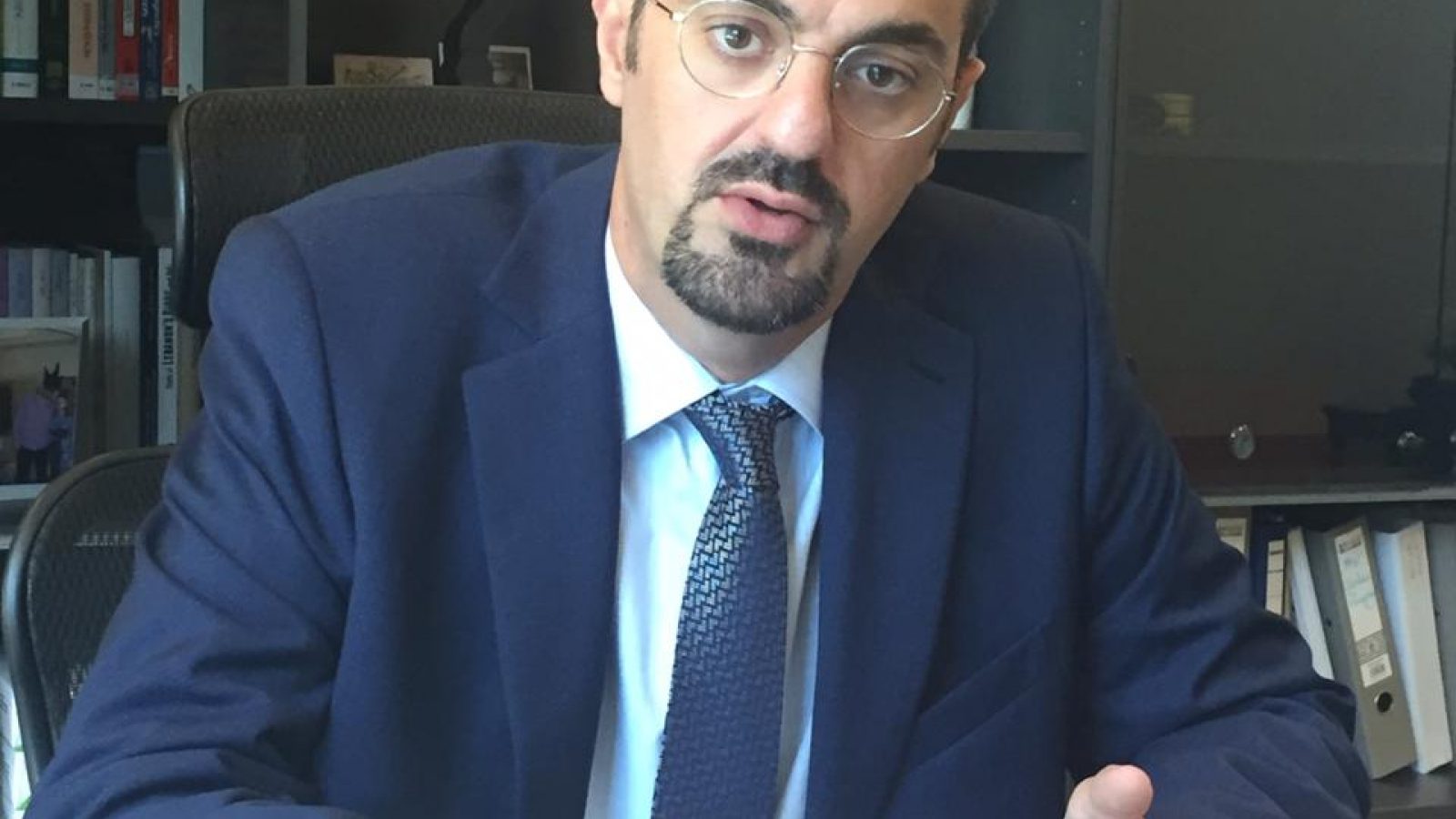 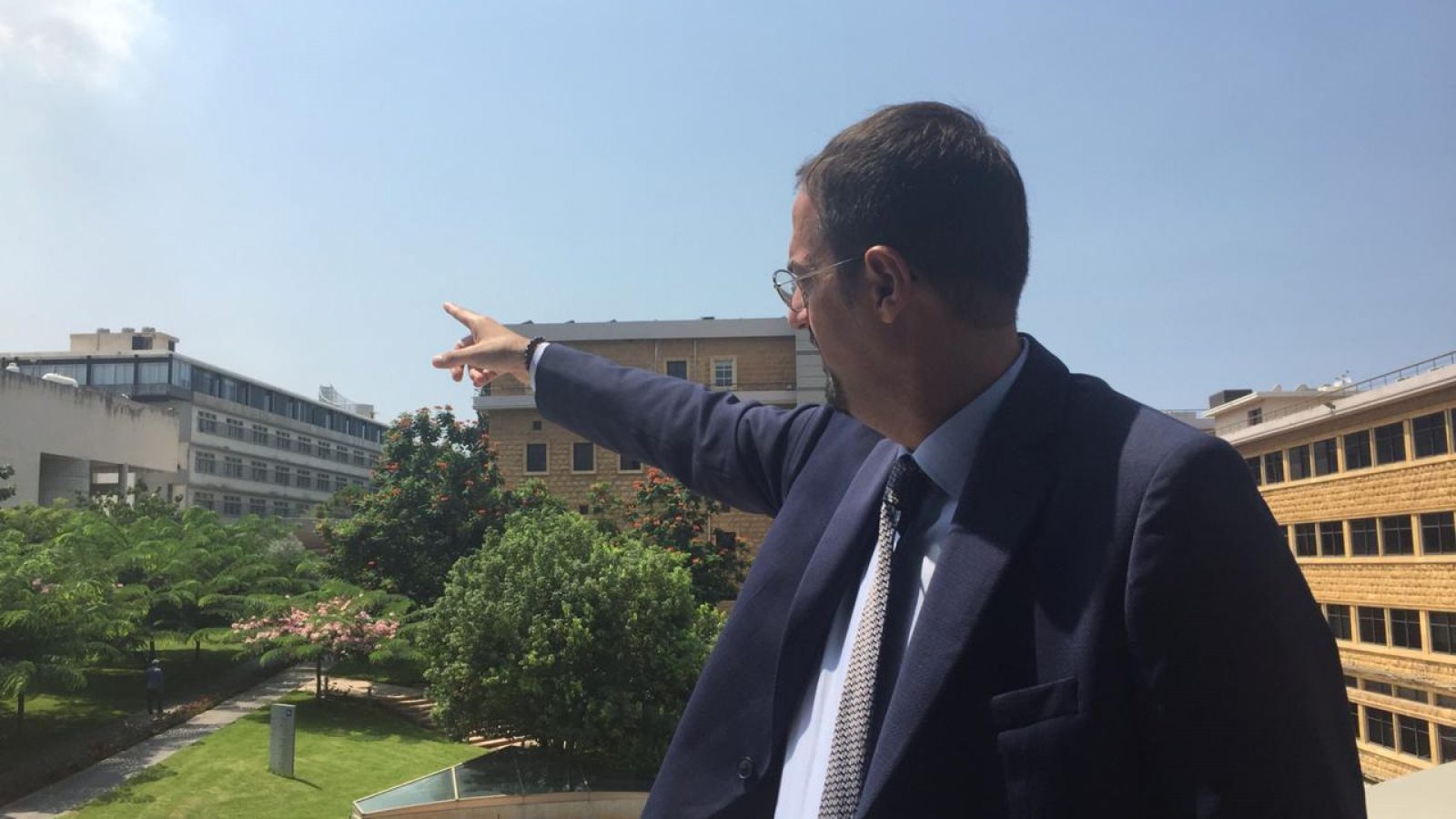 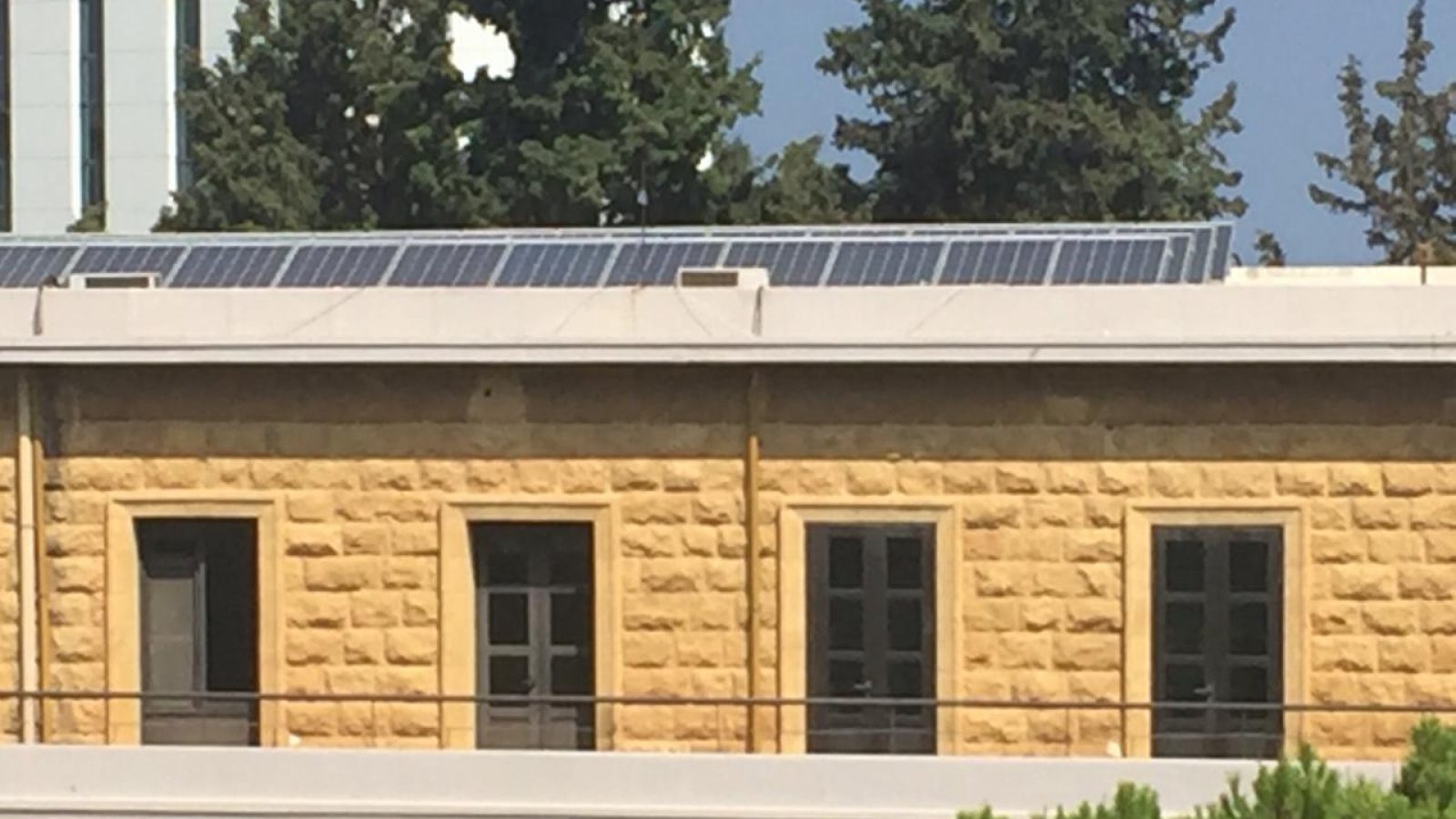 Having earned his Ph.D. in 2008, Dr. Joseph Al Assad is an assistant professor at USEK chairing several departments in the process and is currently the dean of the faculty of engineering – USEK in addition to being a member of The Higher Center for Research at the university. Since 2011, Dr. Al Assad is an advisor at the Ministry of Energy and Water and at the Lebanese Center for Energy Conservation (LCEC). Yet beneath this impressive CV lies a charming and dedicated person.
In person, he is incredibly tall, quite forthcoming and easy to deal with, and judging by his tone of voice, incredibly proud of the EU-funded CEDRO project and the results that came to be at USEK.
“Our figures indicate that in 2018, 1,508,947 Lbs of CO2 were avoided, or the equivalent of the emissions of 151 passenger cars, or the energy of 4,065 computers a year. Since it started the system has generated 528,44 MWh, at this stage we cover 20% of the university needs”.
He then adds – pointing from his balcony towards parts of the university: “The phase II of the project will be financed at the tune of 1,5 Million USD and will include overhauling the whole lighting system with LED lamps – naturally, the idea being – what is the point of generating clean energy if it is to squander it on bad ways of spending it? But then the idea is that we will embark on another solar panel extension which will cover the roof of the new parking lot. Then we are talking about 60-70% of the university consumption with the excess during down months feeding back to grid”.
“Ultimately,” he adds, “we wanted the USEK community to see that it can be done, that there would be no indifference, that everyone would feel concerned. CEDRO was truly that trigger which made things happen.”