City of Culture: Tunis. Last 17 November, this new jewel in the crown was engulfed by a wave of enthusiastic students, who came to participate in the “Flagship Event #EU4YOUth: EU-Tunisia Youth Partnership: Let’s go further together!” Under the patronage of European Commissioner Johannes Hahn, the event brought together more than a thousand students from various universities and Tunisian campuses in Tunis and outlying regions. The event gathered experts, project coordinators, beneficiaries and the general public around projects financed by the EU, via conferences, discussion panels and an exhibition. Its goal was to make the European Union’s support in areas that predominantly affect youths better known. The event focused on several areas of the EU’s cooperative efforts in Tunisia, such as education, research and innovation, entrepreneurship, culture, art, creativity and media. 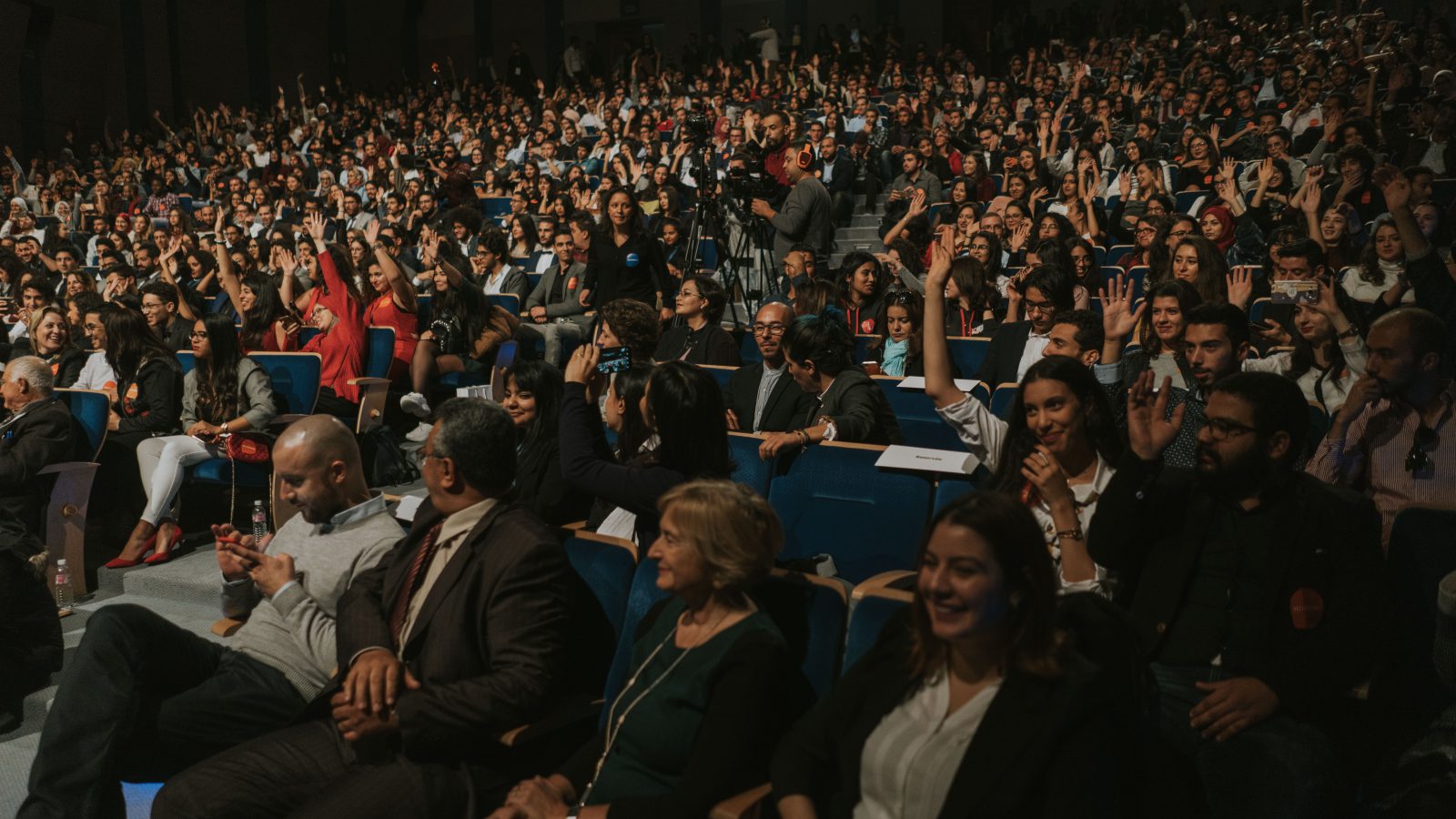 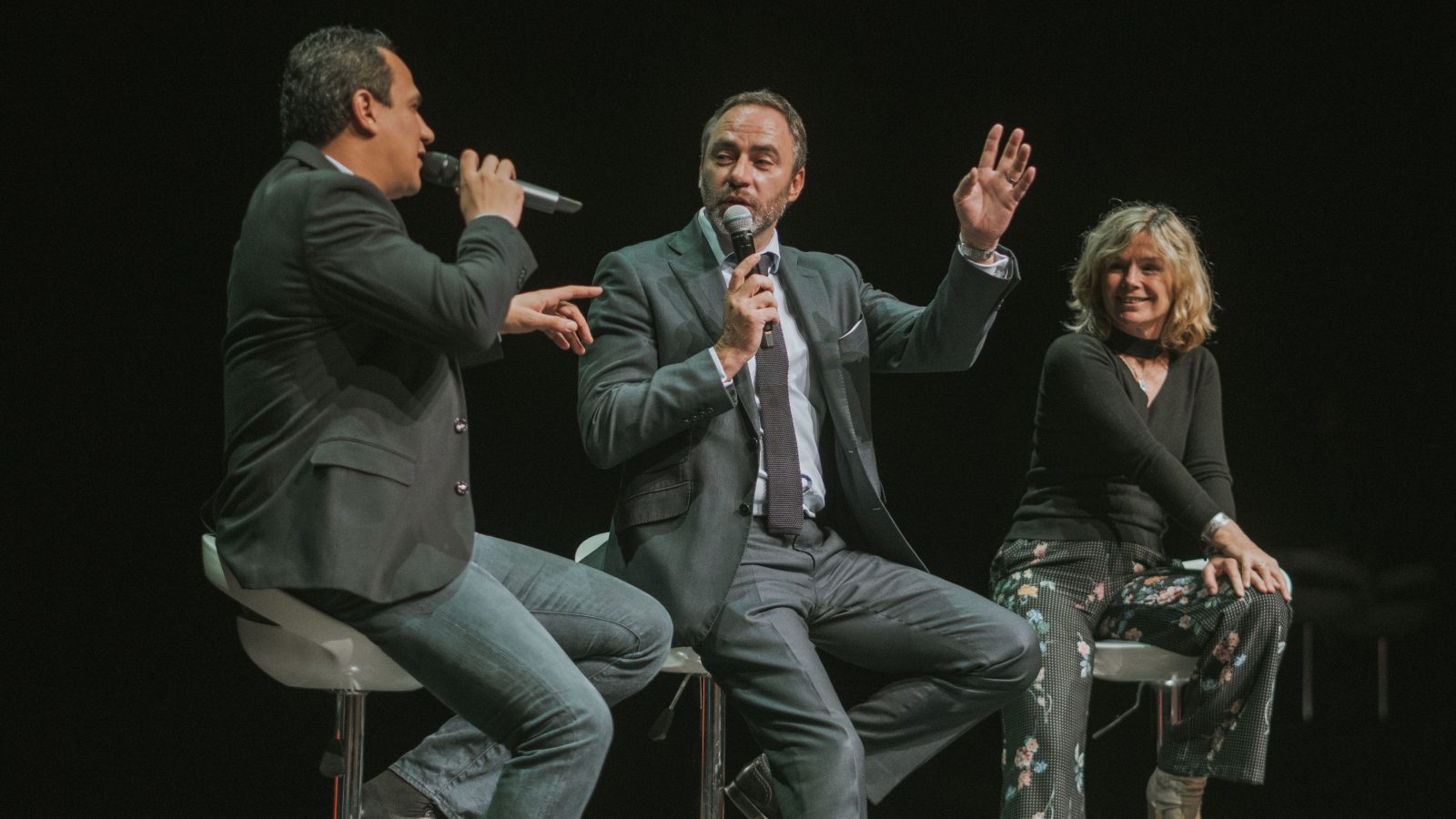 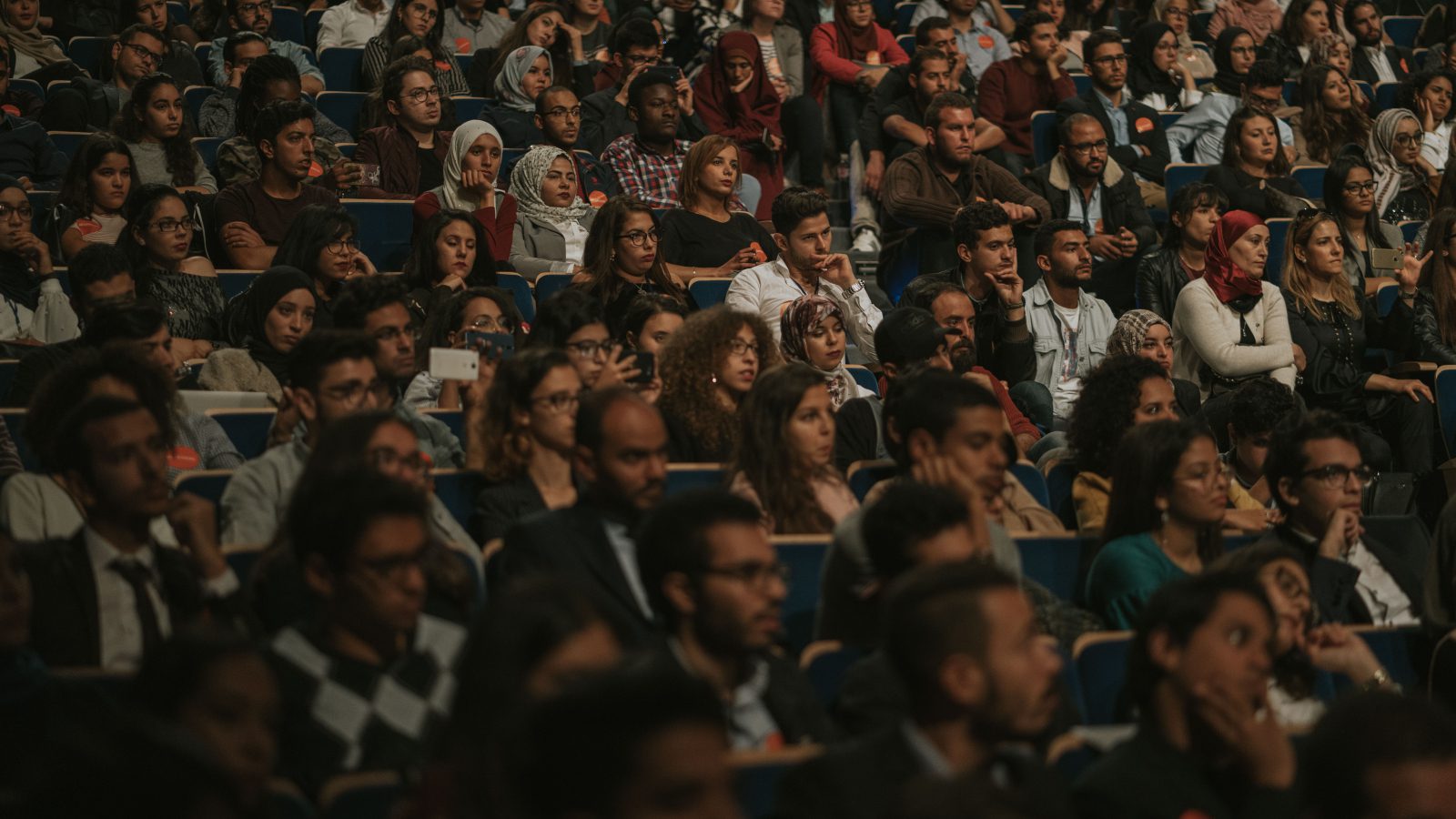 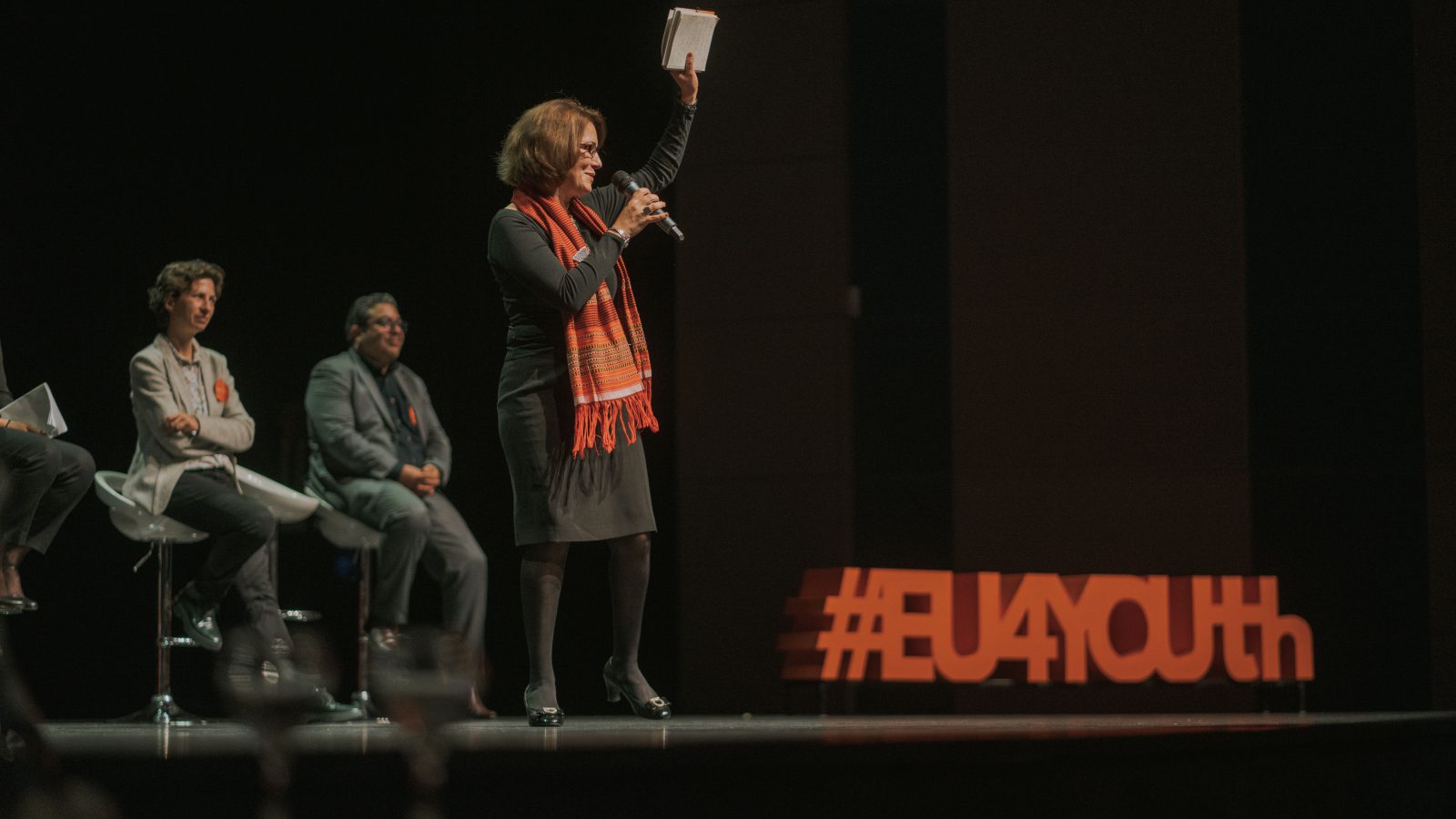 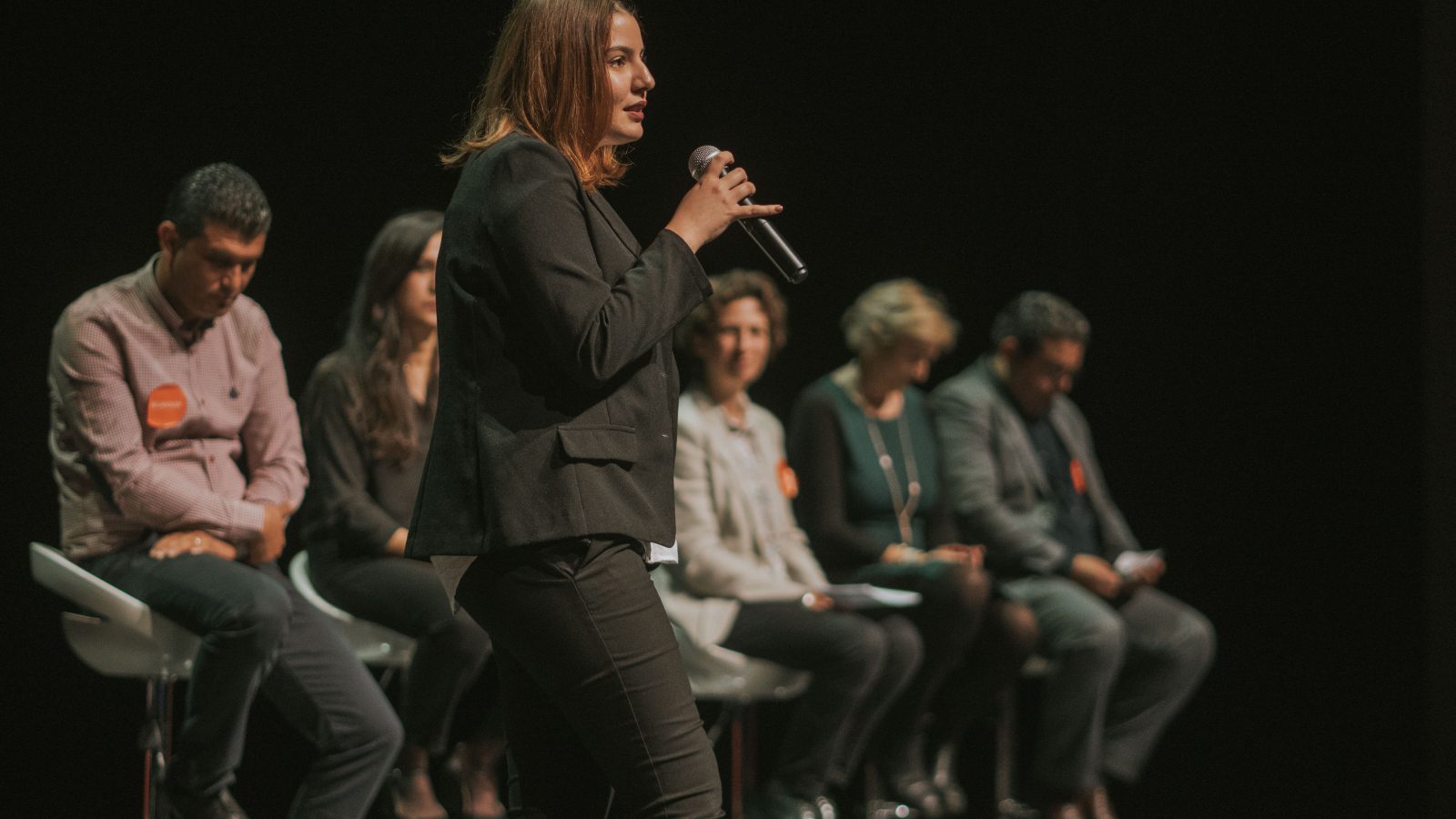 Filled to the brim, the Théâtre des Régions, one of the City of Culture’s flagship spaces and the host site of the event, witnessed something rare, unique and valuable. Because, to draw the attention of an audience as demanding as students, a special presentation with a festive tone was necessary. As a result, it was a day that was simultaneously about education, awareness-raising and feedback, with artistic performances setting the pace. At times, the adrenaline in the amphitheatre rose to the point that it became like a festival, where young people swayed to thunderous applause. It’s this relaxed atmosphere that encouraged the various speakers to embrace the new conference format, and make informal and often improvised speeches. This was the case for Patrice Bergamini, Ambassador of the European Union in Tunisia, who addressed the youths at the opening of the session in a tone they could relate to, with frank and straightforward statements. “Together, you have more weight than any political party. Organising you, uniting you to bring about change and to ensure a better future for you: these are the European Union’s goals”, he declared to this swathe of students and to the beneficiaries of the European Union’s various programmes. “You have the tools to change things.  We’re here to help you. Many programmes have been established to encourage you to never give up and to get off to a good start, because young people are Europe’s priority”, he added. “Whether in the social domain or the economic domain, it’s up to you to find the answers needed to tackle the future as positively as possible. You have a few years ahead of you to make a difference so that hope doesn’t slip away. You have an enormous responsibility, but you can’t imagine the hope you represent. Even if it’s difficult, never give up!” he concluded. 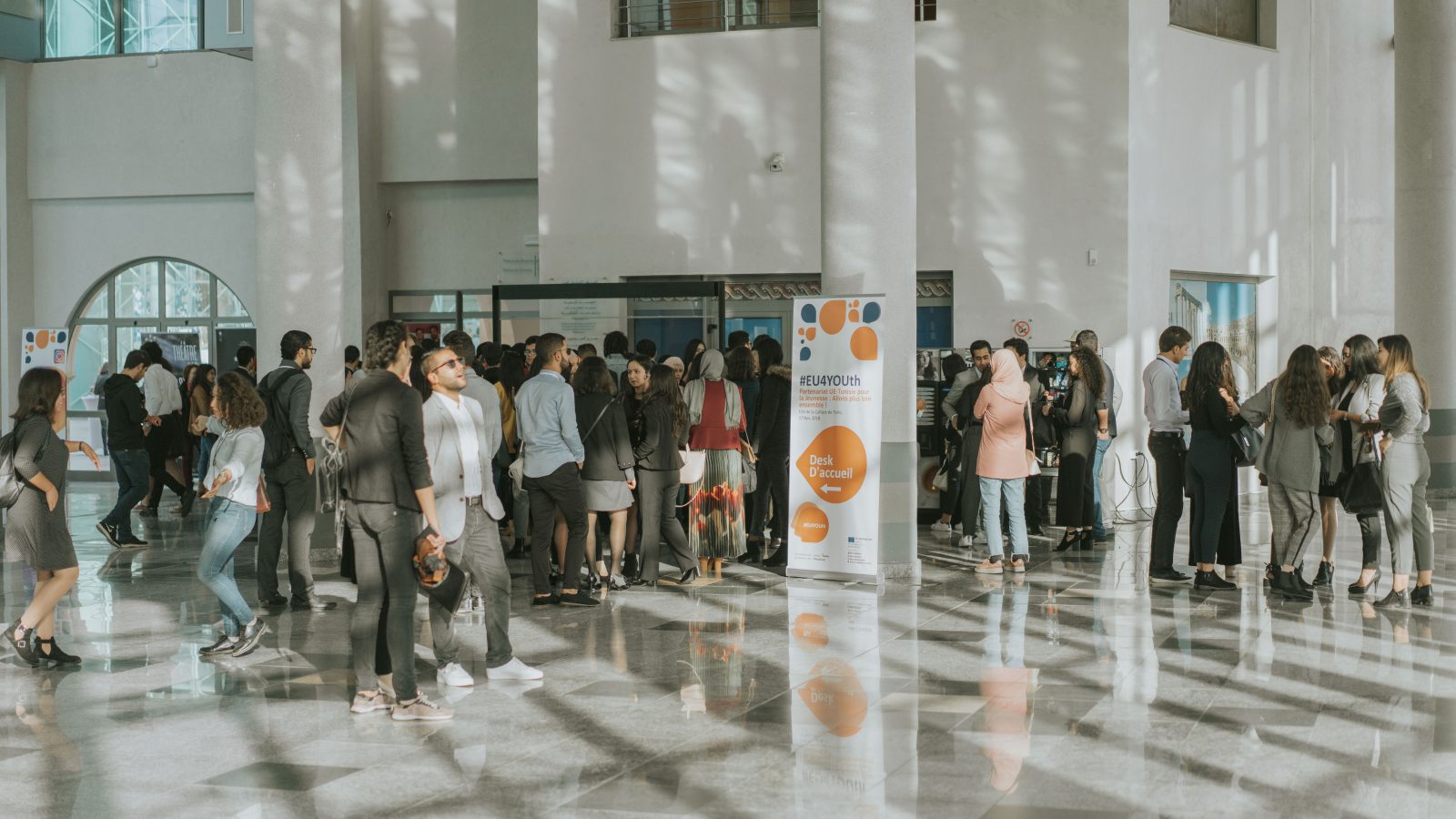 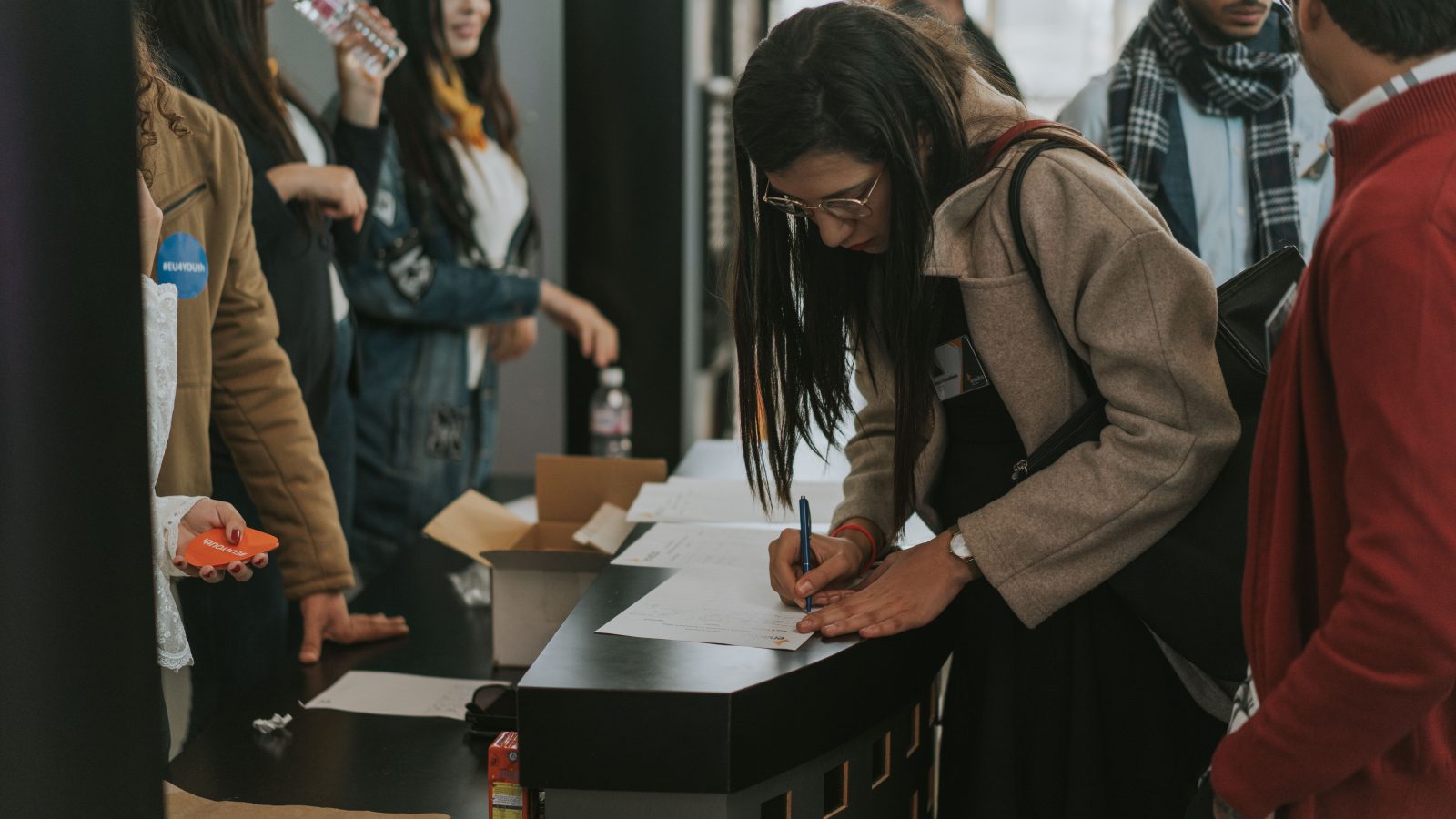 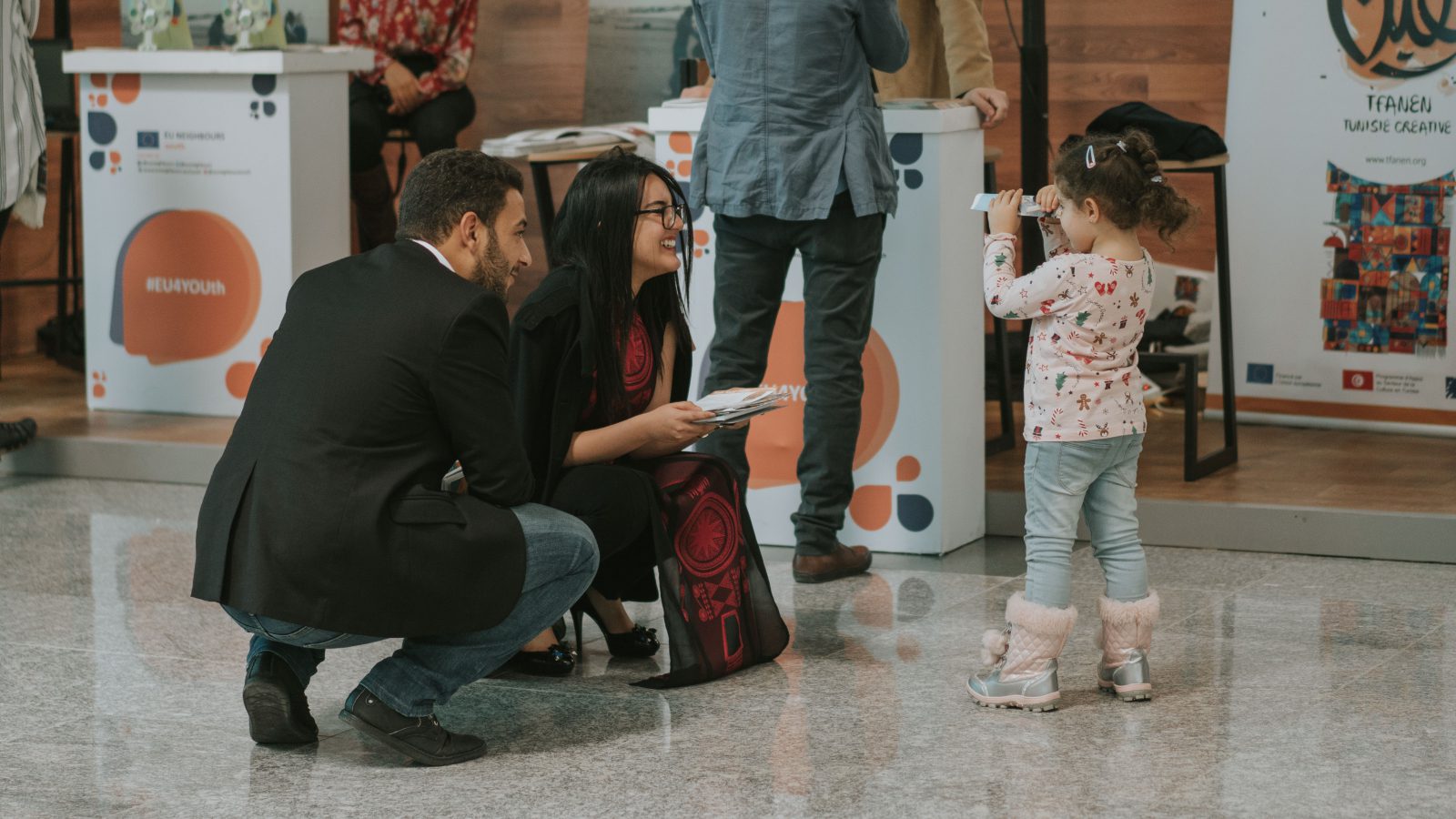 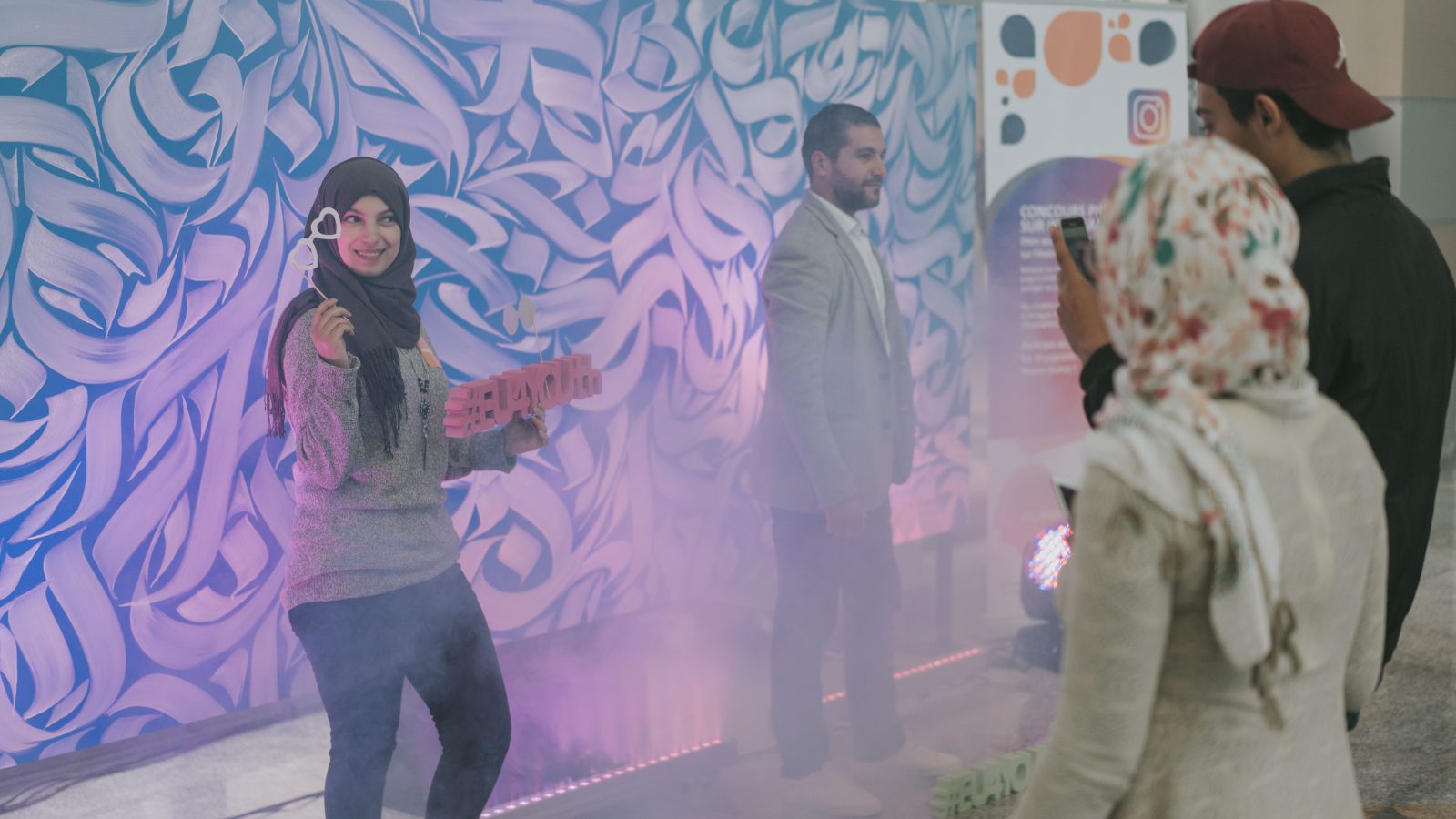 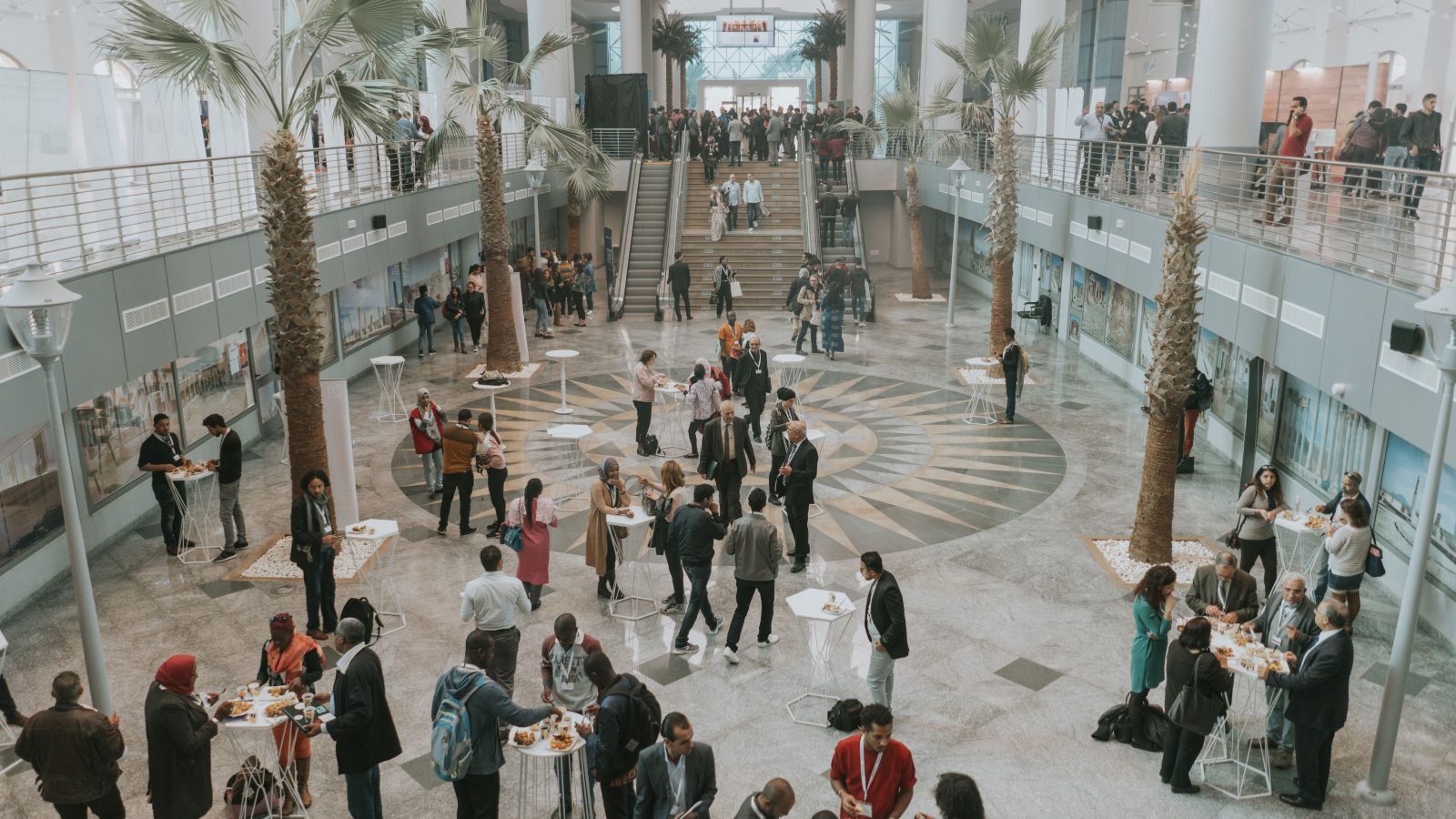 Re-establishing trust
For his part, Abdelkoddous Saâdaoui, the Secretary of State for Youth with the Ministry of Youth and Sports, revealed that 57% of the Tunisian population is under 35 years old. “However, we are often under the impression that this segment of the population is a minority”, stated Mr Saâdaoui, denouncing the lack of interest in young people. “Everything negative is attributed to young people”, he continued. “We talk about the ten young thugs who were arrested, but never about the youth who succeeded, we don’t talk about the next young Ons Jabeur or a young Oussama Mallouli!” he said, with astonishment.
To him, “this generation was born free and any backtracking is impossible.” However, he feels that the real gap isn’t generational. “There’s a rift between the regions, and a trust issue”, he added. “It’s the one problem we want to solve, because the only way forward is to trust you, and the State trusts you”, he emphasised.

To address the situation, the Secretary of State advocates transforming more than 200 “deserted” youth centres into “centres for creativity; true launch-pads for young people”, but “it’s up to you to design the programme and the content”, he declared. “You are the new seeds of the nation, do something you care and dream about. Don’t emigrate, travel instead!”  exclaimed the Secretary of State.

Abdelaziz Darghouth, President of Enactus-Tunisie, which includes 4,500 students and 60 universities and has carried out more than 850,000 hours of volunteering, for his part, emphasised that the event was a key moment for young people, to successfully initiate social projects through an intelligent and constructive rapprochement. “Closing the borders on the two sides of the Mediterranean would be costly and won’t solve any of the issues! Europe can help build a better world for the youths of the South. We must find a shared vision to complement and help one other. We want to go further and build an entrepreneurial and social culture”, emphasised the Chairman of Enactus Tunisie.

The event especially enabled young people to acquaint themselves with the EU’s various projects related to culture, education, media, in 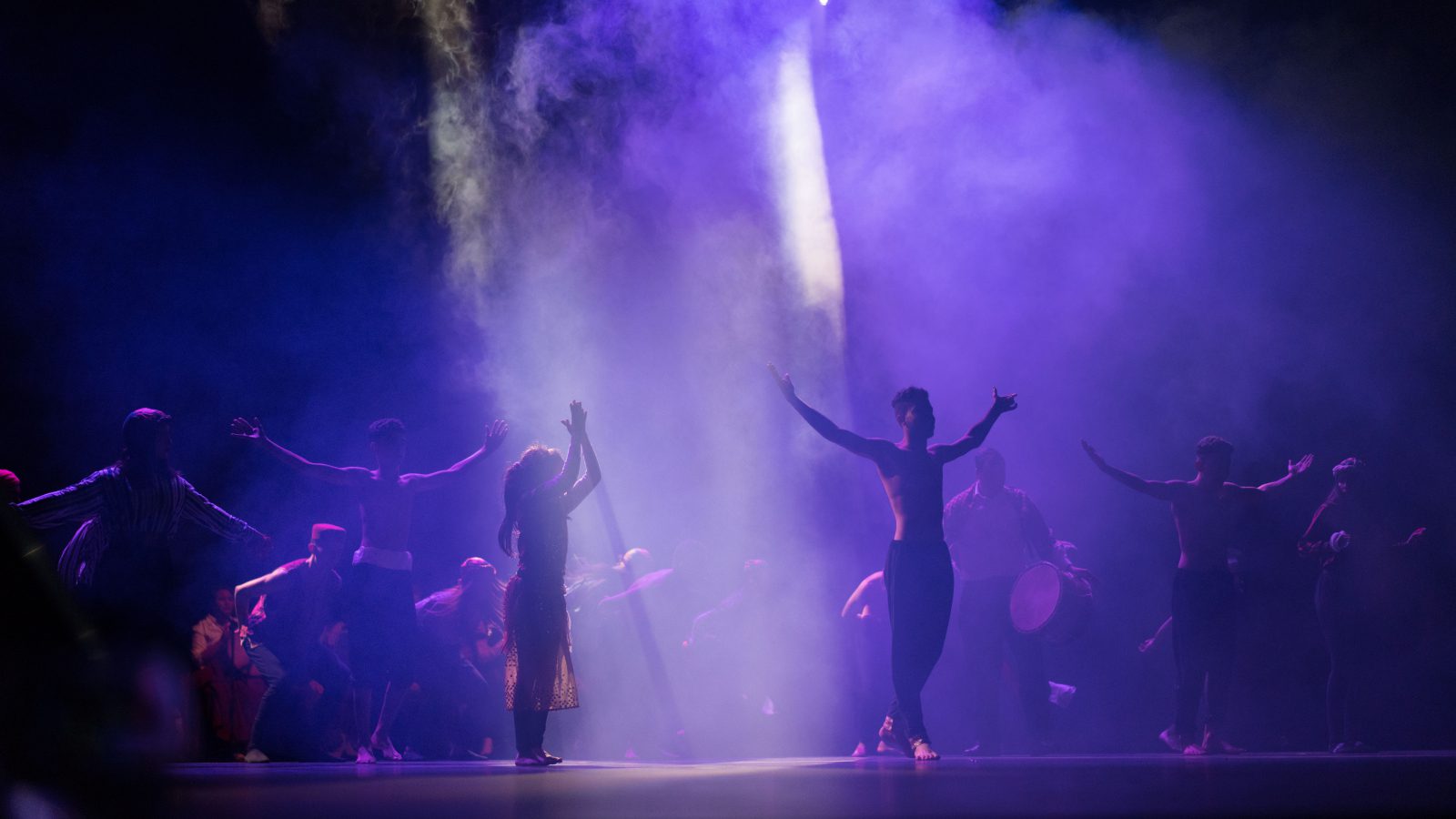 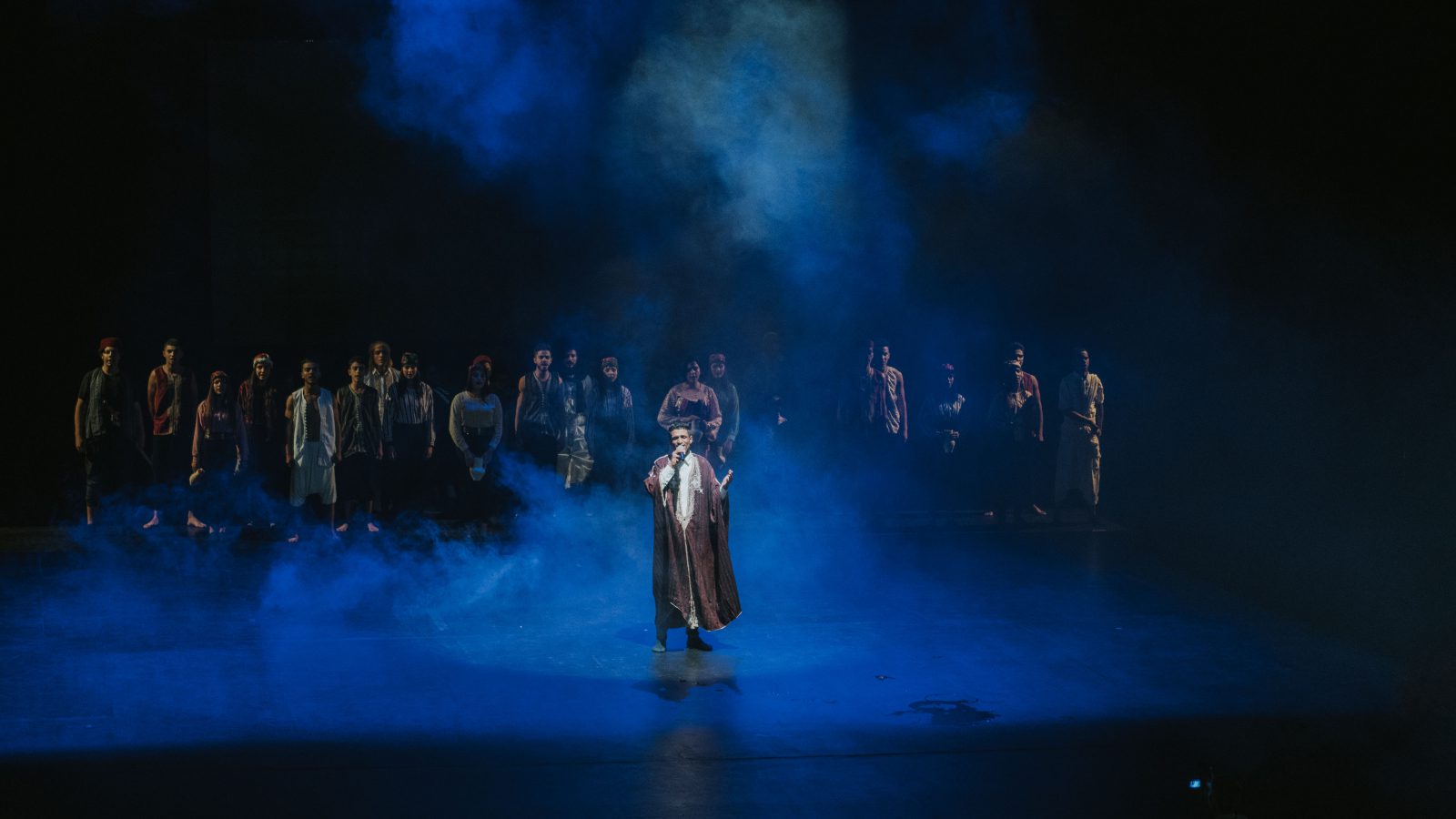 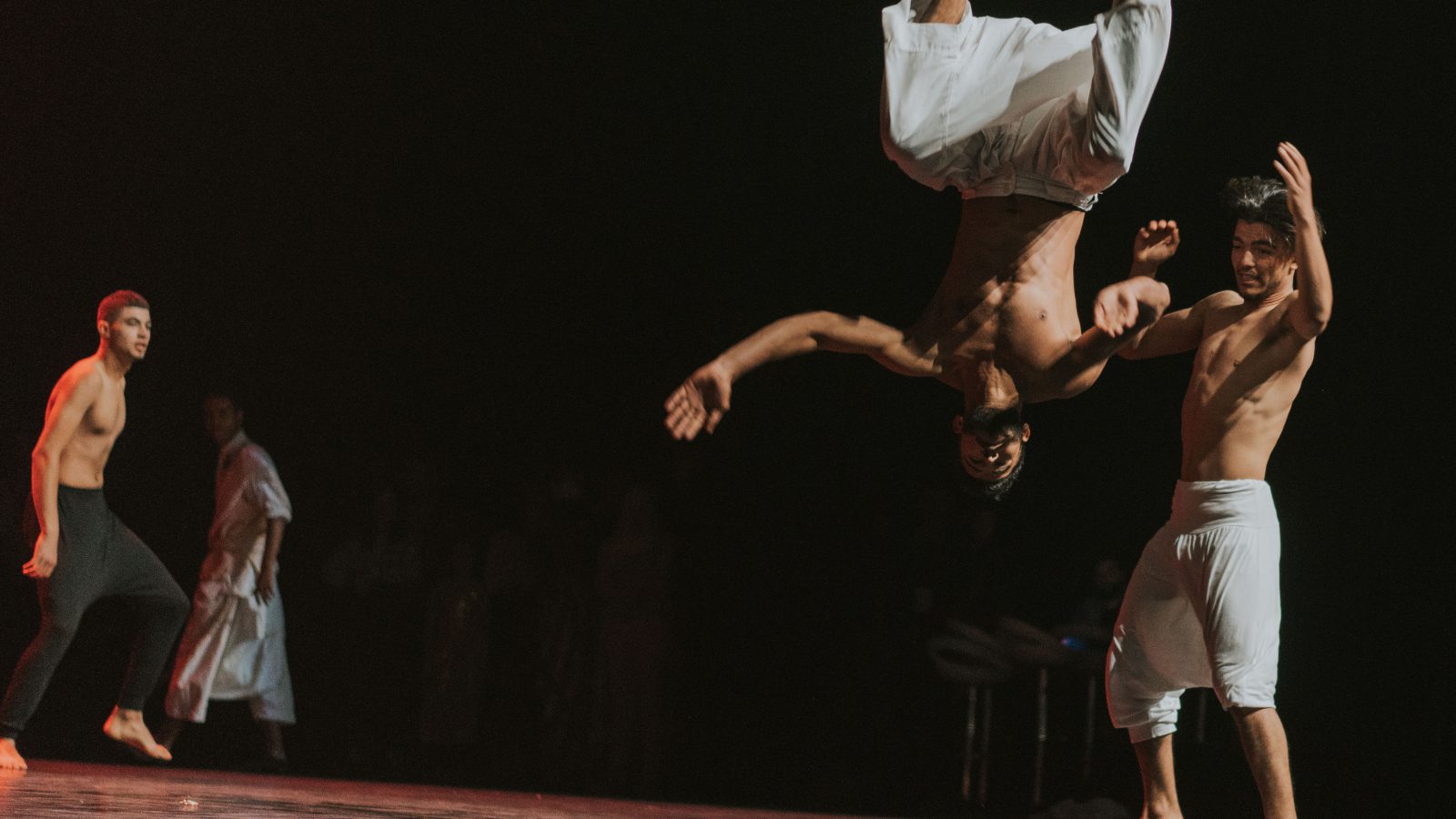 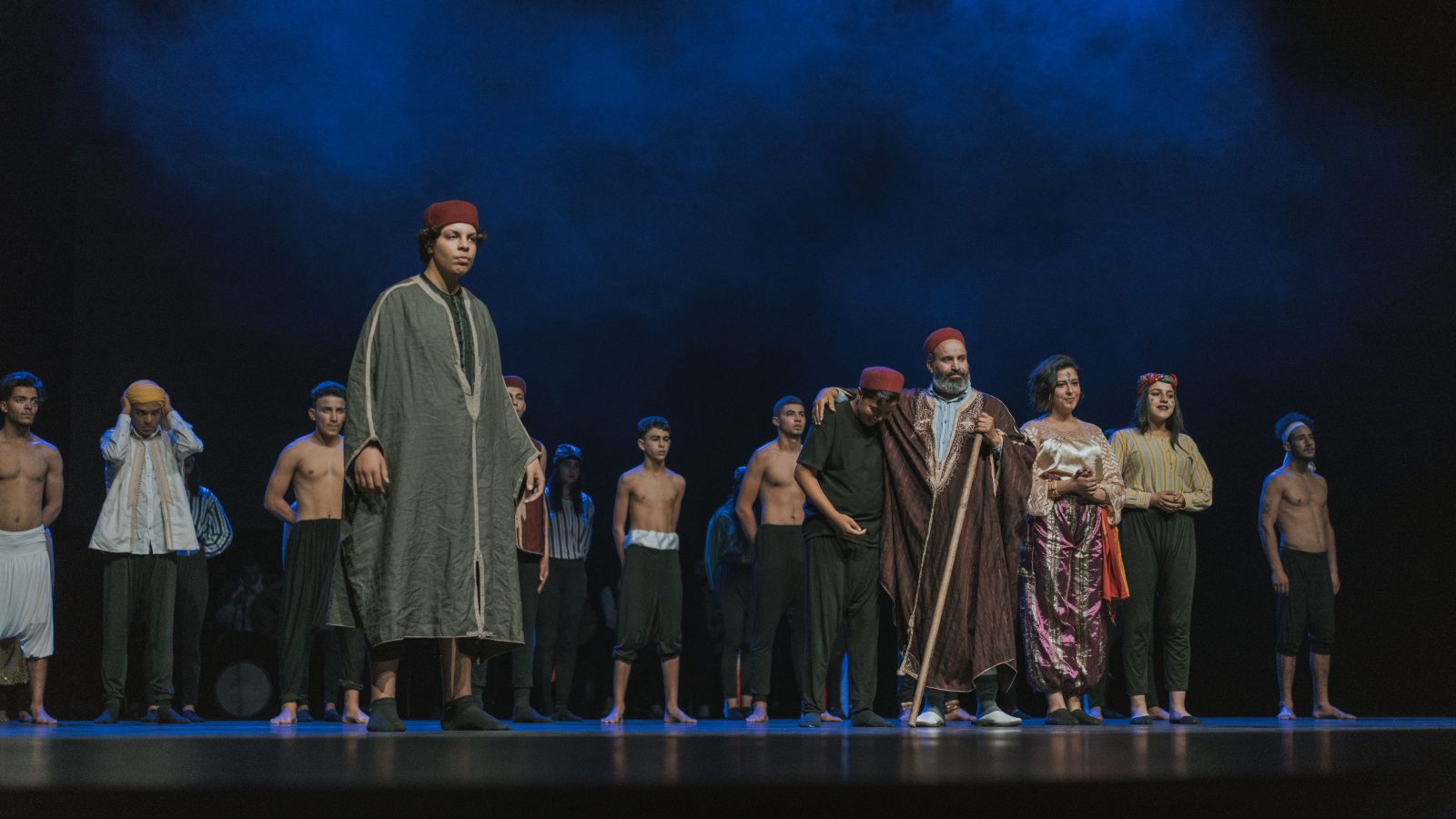 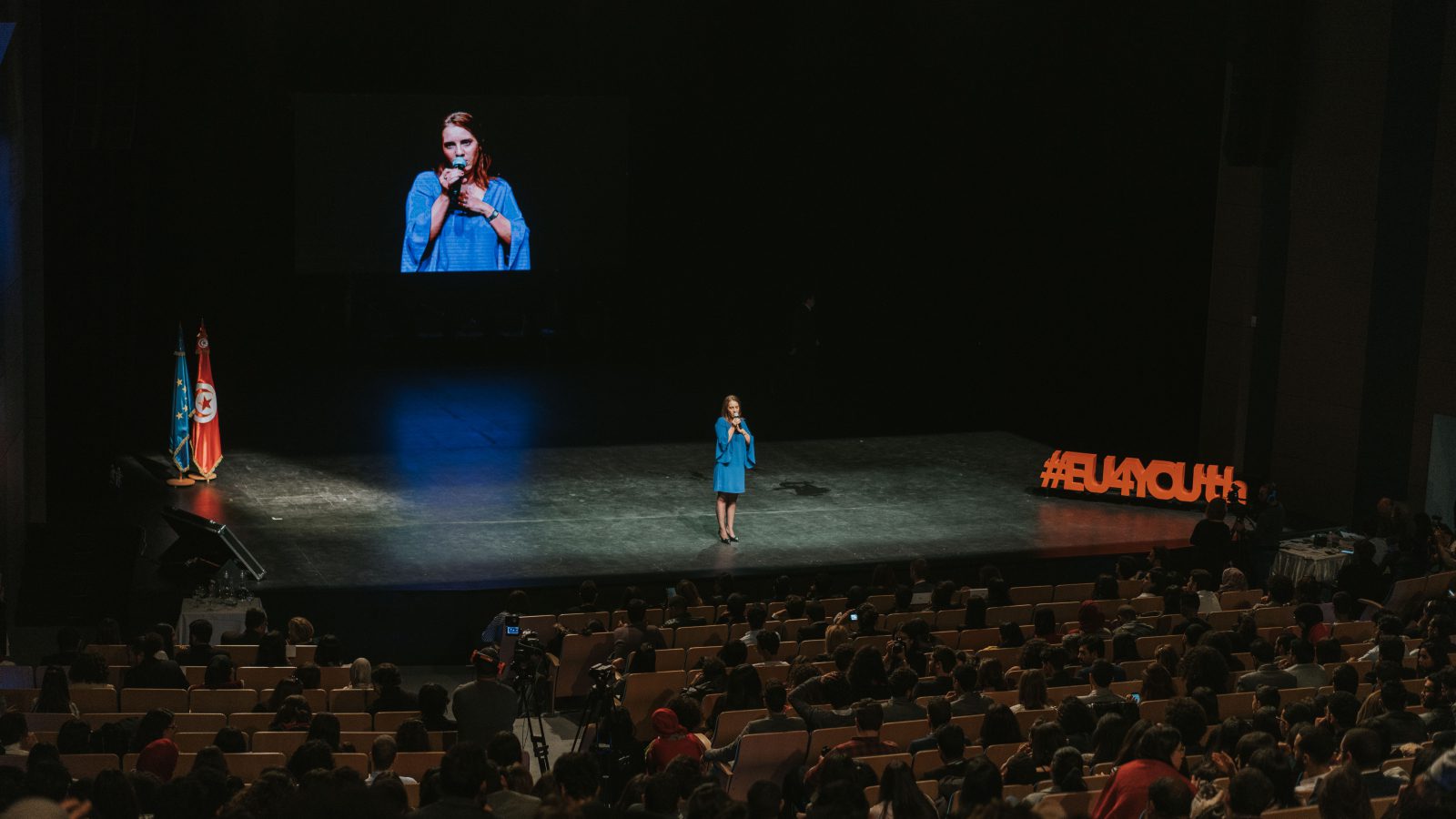 Beneficiary testimonials
The presentations were followed by testimonials from young beneficiaries who reflected upon the programme’s positive impact on their lives.  Mr Bahri Ben Yahmed (Danseurs Citoyens), beneficiary of the Med Culture programme, described his journey and the support provided to him by Europe. “I’ve been a dancer for 30 years, a film-maker for 15 years, I’m self-taught and I carried on alone as a Tunisian dreamer. How to portray a different image of my country has always been the main question for me. I’ve therefore worked with minorities and more specifically, with black people in Tunisia. Art is just a pretence to create change. You simply need to believe in it and lead the charge. Incidentally, I’m very pleased that we’ve recently voted for an anti-racism law in Tunisia. It felt like a sort of culmination of my work. I’m asking the European Union to support youths but not to create for them. My advice: hold on to your ideas and your projects: it’s a long-term endeavour.”

31-year-old Mrs Nesrine Daly, another beneficiary (Centre Culturel Afro-Med), spoke in similar terms: “Project financing exists, as do internships, but the issue for cultural creation remains the lack of visibility. With Med-Culture, the big benefit was the ability to network. I successfully gained what I was lacking through this programme: know-how.”
Several programmes and projects were presented during the event, such as Horizon 2020, SouthMed WiA, Creative Mediterranean (Nabeul Cluster), the DiAfrik Invest project and the Tfanen Tunisie Créative project.
Many other surprises were organised, including a photography competition, with a graffiti mural by the famous young artist Inkman, the Al-Alia operetta by the 7th Dimension non-profit (Kasserine) and a performance by the young Tunisian rapper and peace advocate Mr Ramzi Ben Achour #Mathcima.
The Mathcima group’s songs captivated the audience, which kept asking for more. The artists won the audience over with hit songs that brought together different sounds and dialects to denounce racism and stigmatisation.
As for the Al-Alia operetta by the 7th Dimension non-profit (Kasserine), it brought a whole world onto the stage. It evoked popular tales from which mesmerising, spicy and epic rhythms emerged.
European Commissioner Johannes Hahn, who enhanced the event with his presence, declared at the end of the day that it was “an opportunity to show European support for the next generation, to present what we are doing to help them lead a decent life and to provide them with possibilities, to attest to Europe’s firm support for Tunisia and, in particular, Tunisian youth, and to celebrate the event with music, because we are united in our diversity and we believe in the power of culture.”
Patrice Bergamini, Ambassador of the European Union in Tunisia, offered his congratulations for the event’s success and applauded the “feedback, which allows us to find out what worked and what didn’t” and to spread messages which “speak of the values which bring us together”.

This bright and colourful day finished on an additional musical note: the magnificent “24 Fragrances” concert from maestro Mohamed Ali Kammoun. The Tunis Opera Orchestra’s orchestral creation provided an authentic musical portrait of a young and modern Tunisia and was a vibrant homage to a multifaceted Tunisia. The 24 Fragrances in question were inspired by aromas and musical sensations which are etched into the Tunisian cultural identity, mixed together with a special touch from the composer, who gave the work particular significance, for a journey through time, space and the senses.