Welcome to the world of Switchers!

The SwitchMed programme, funded by the European Union, aims to expand the presence of green entrepreneurs in the Mediterranean region. More than twenty Egyptian eco-innovators participated in a workshop in the Cairo region to develop their projects. 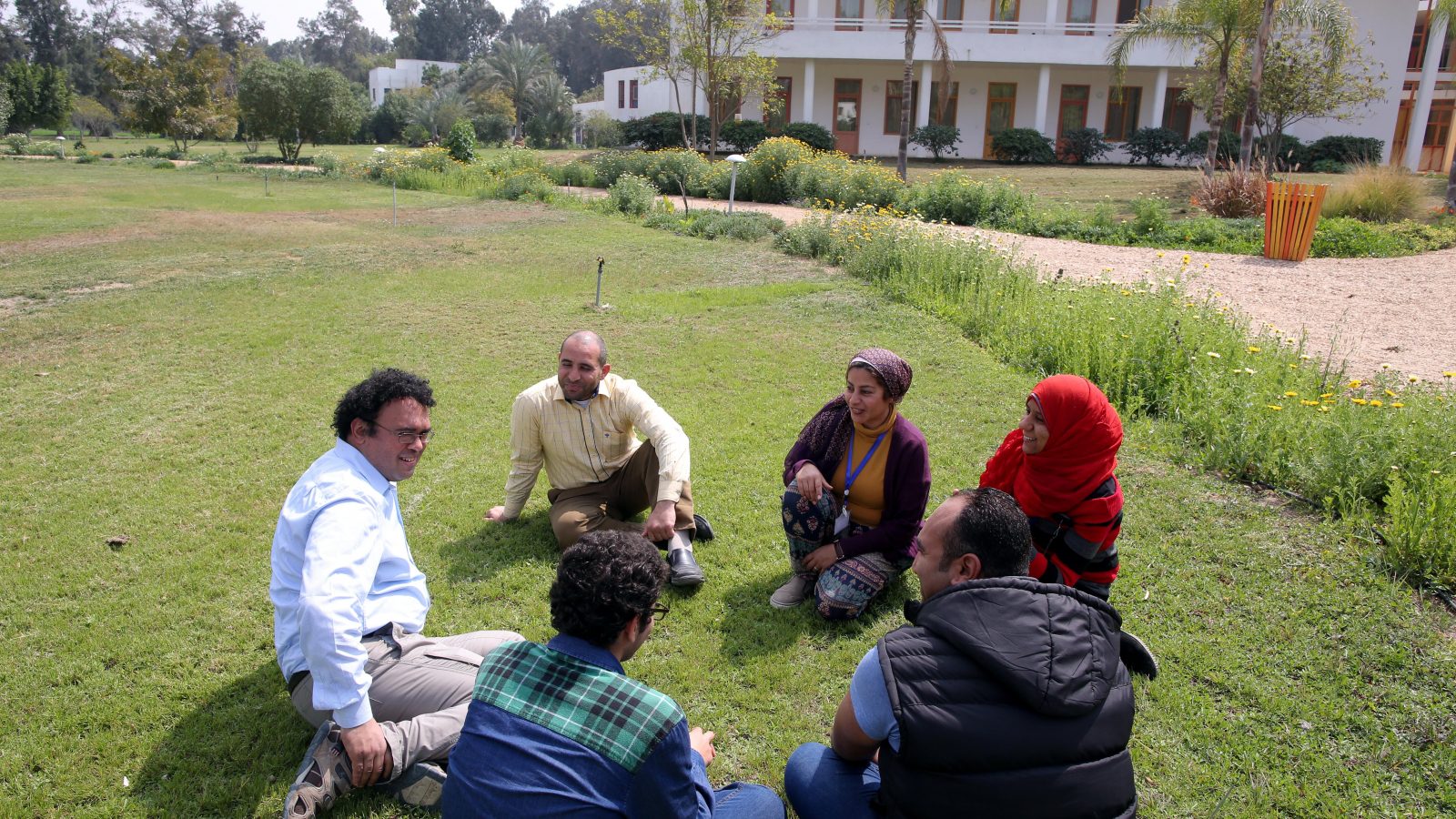 The reality of informal areas around Cairo contrasts with the quiet and peaceful atmosphere of the Sekem private organic farm, located on Belbeis Desert Road roughly 70 kilometres away from Egypt’s capital city. The workshop held in this eco-village within the context of the SwitchMed programme gives people a chance at bringing their passions and their positive dreams to life, away from the hustle and bustle of city life and government bureaucracy. Over four days of collective work, we learn about the stories of people trying to improve their environmental footprint.

Twenty-four Egyptian participants presented their eco-innovative projects in the context of this European Union funded programme, whose goal is to strengthen the rapid expansion of sustainable consumption and production (SCP) in the Mediterranean region. At first, they are seated in a circle before being divided into small groups to be able to better discuss topics such as the challenges and structures of their projects, which are at different stages of development. There is no doubt that their discussions lead to more creative social and ecological solutions.

They look like they are playing with hula hoops or coloured pencils, but they are using this time to rethink their projects, in line with instructions from the facilitators hired by the Centre for Environment and Development for the Arab Region and Europe (CEDARE), which was founded in 1992 as an international inter-governmental organisation with diplomatic status, upon the initiative of the Arab Republic of Egypt, the United Nations Development Programme, and the Arab Fund for Economic and Social Development. There is little doubt that the contribution of the Arab Fund for Economic and Social Development has helped spread information about the workshop, mostly held in Sekem, to a greater number of candidates from a variety of places, particularly from Upper Egypt and Cairo.

By the second day of the workshop, the “Green Entrepreneurs” already have a clearer vision of things. “What I need is technical help,“ says one of them, and the person next to him replies: “Funding comes later. For now, we have to get our ideas in order, build a team, and find partners to work with.” They don’t have to look far for partners, some of whom can be found right here on the Sekem farm, sitting in the shade of a tree or at the restaurant of the hotel where the 24 eco-innovators are staying.

For instance, Mohamad Sami, who launched the Go Bike initiative six years ago to encourage biking as a means of transport, immediately saw the complementarity between his own project and the one created by Sarah, a young designer who is here to present her bike-sharing system. “Most of the bike-sharing systems she showed me will allow me to expand my project.” “Incidentally, that’s why I’m here,” she points out. Their ideas are also related to those of Walaa, another female participant from the Maadi district of Cairo, whose hope is to create an application that will connect neighbours in order to improve services.

Orange Trees in the Streets

In the same spirit, Awatef Gaber has worked with Assaad Mohamad for six years to bring plant life to the terraces of the houses in his southern Egyptian town, Sohag. Teaching inhabitants to grow gardens on their balconies or turn their terraces into vegetable gardens will not only allow them to curb pollution but also enable citizens to earn a living by selling their harvests. With Tamer Nassar, professor at the Faculty of Science, they talk about transforming oil waste products into compost.

Nassar is a geologist who has been closely looking into environmental initiatives since 2000. He hopes to plant fruit trees along the streets and avenues of the capital city. This would allow the city’s inhabitants to pick fruit from the orange tree nearest them. The organic waste is likely to be reusable. A fourth candidate enters the conversation, sharing his experience in recycling.

The next day, they resume their conversation while on a field visit of Sekem’s laboratories and workshops. Samir Ossama wants to reproduce the model of this organic farm back home in Tanta, located in the Egyptian Delta.

With the Waste Collectors of Mokkatam

A few hours later, the “Switchers”, who now have the impression of being at the core of a new community of green entrepreneurs, visit the waste collectors’ enclave in Manchiat Nasser, at the foot of the Mokkatam Mountain.

There, everything is recycled: electronic waste, plastic cups, paper, etc. They have even made biogas from dead animals. The ragmen of Mokkatam have been in this business since the 1970s. They know all about recycling, whereas most of the “Switchers” are just getting started. The time has come for some more networking. Business cards and experiences are traded as the workshop’s facilitators, Mohamed El-Mongy and Névine Kamel-Toueg, look on alongside Andrea Calsamiglia, their instructor from Spain who has made the trip from Barcelona for the occasion to observe the participants’ progress and help develop their ideas, as part of the SwitchMed project. “This part of the project is the one concerned by the aid granted to civil society in order to implement eco-social solutions, but the project also has another aim, which consists of developing circular economy and eco-innovation policies, creating synergies, and transforming green ideas into commercial opportunities,” Calsamiglia says.

Two initiatives will soon be selected to receive coaching from the team to provide them with the technical assistance they need. Meanwhile, the participants are filled with positive energy. Sitting on the ground, they have a quick meal before returning to the eco-village to continue the workshop.