When ceramics regained its nobility

The adventure began in 2014 in Nabeul, Tunisia with the establishment of a cluster dedicated to ceramics, and more broadly to table and ornamental ware, at a time when Tunisian handicrafts showed signs of running out of steam. Four years later, the results are more than enlightening. The project is funded by the European Union and Italian Cooperation, and implemented by the United Nations Industrial Development Organization (UNIDO) in partnership with the National Office of Tunisian Handicrafts (ONAT) and the assistance from the European Bank for Reconstruction and Development (EBRD).

Nour Bellalouna, artist-designer and manager of Belle Lune, is one of the beneficiaries from the EU-funded cluster. As a Fine Arts graduate with a specialisation in Plastic Arts, she could have ended up as hundreds of Tunisian graduates in this speciality have – unemployed. However, thanks to an internship with a craftsman, she got into ceramics and eventually saw a change in her interests. 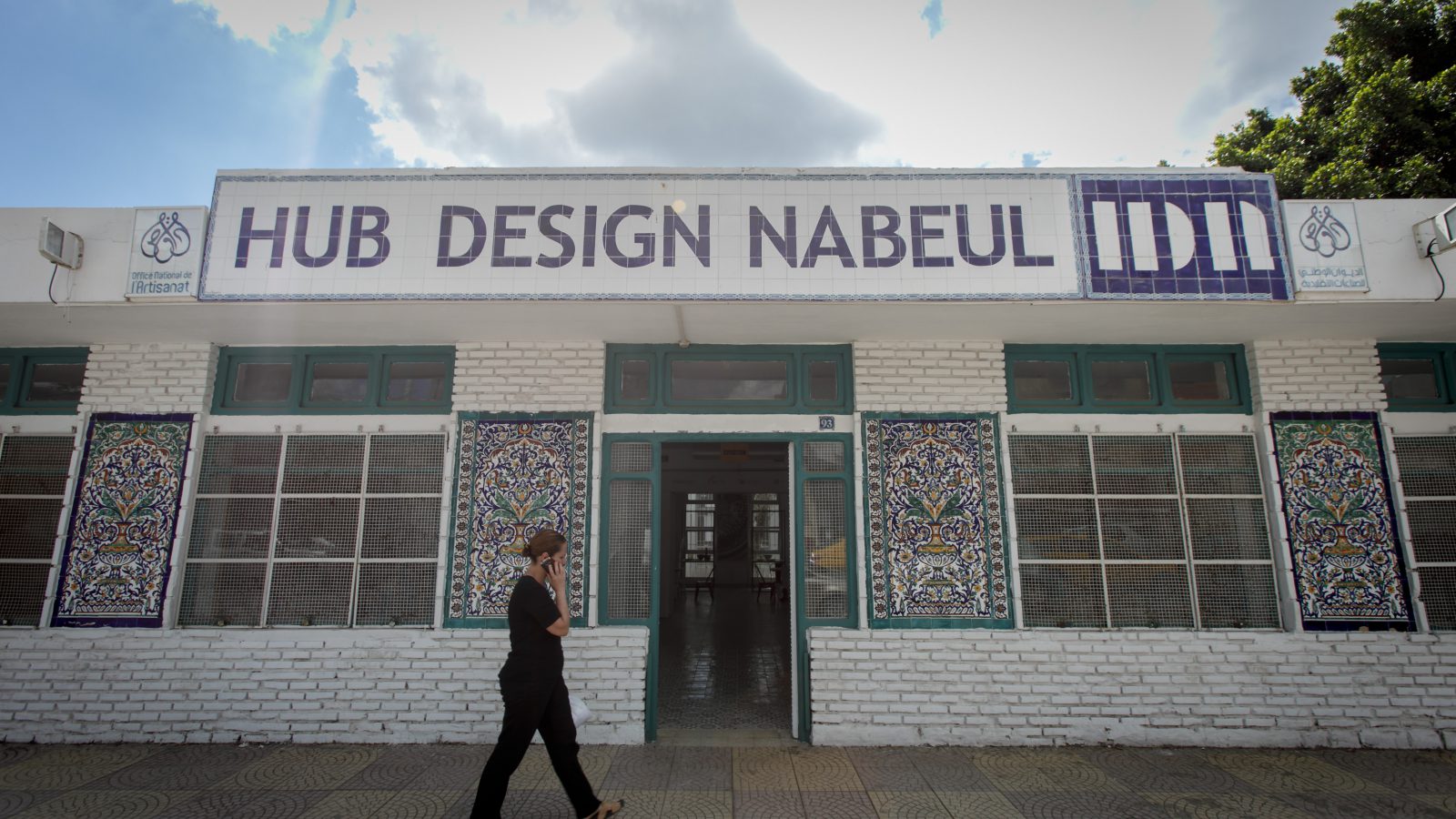 A general outside view of the Nabeul Hub Design in Nabeul 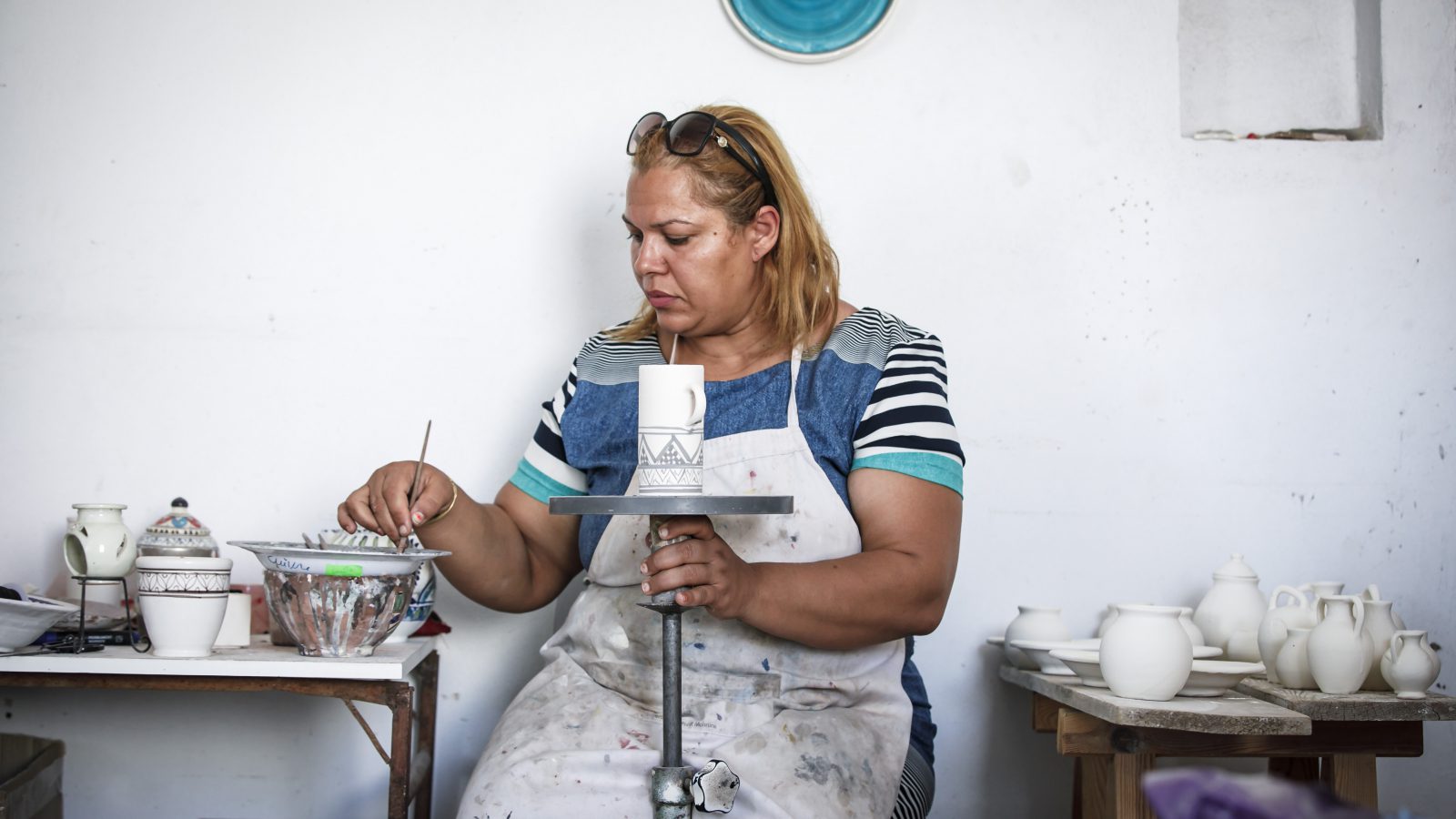 Nour Bellalouna paints a clay cup inside her workshop in Nabeul 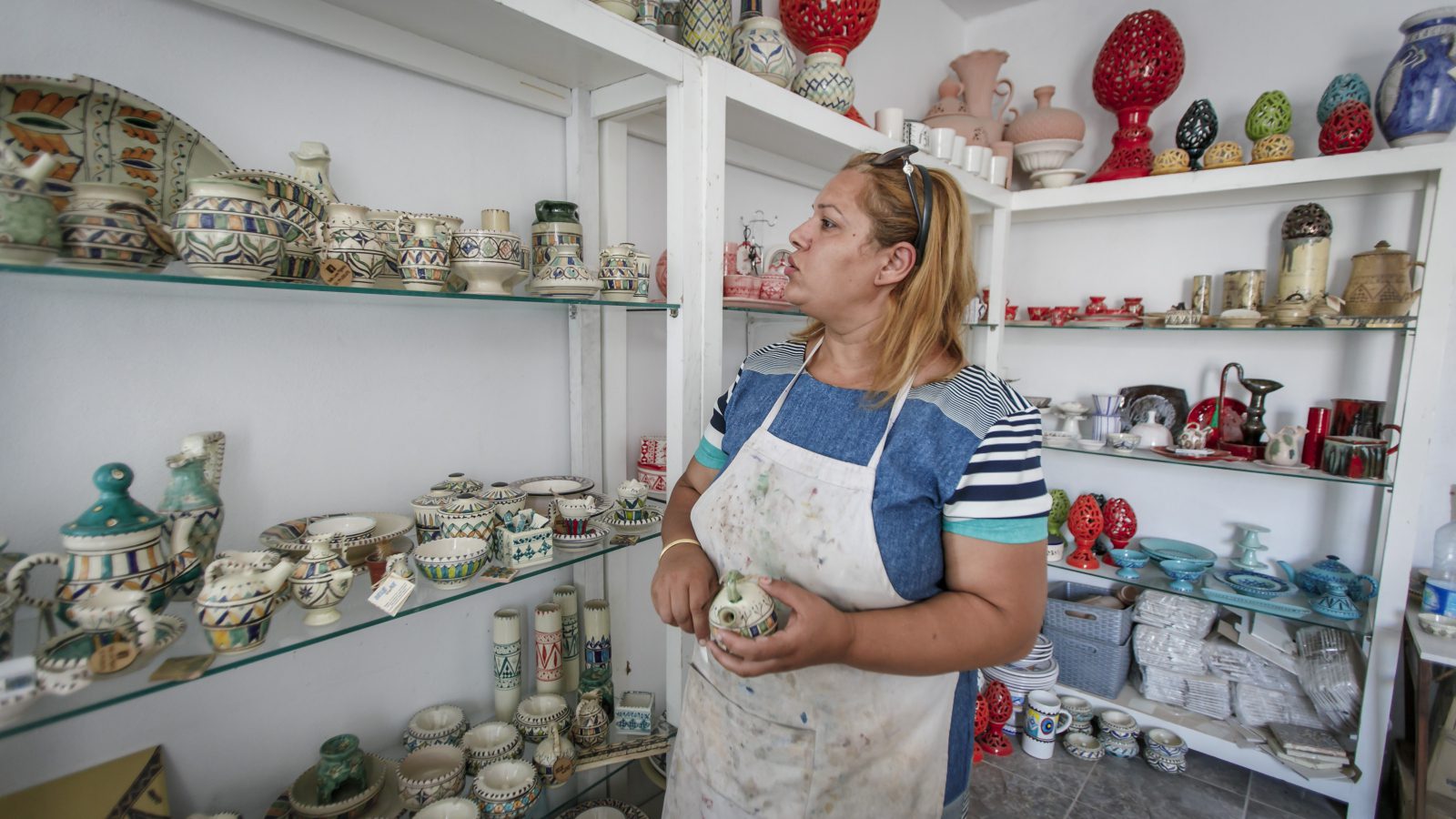 Nour Bellalouna, craftswoman, presents her creations inside her workshop 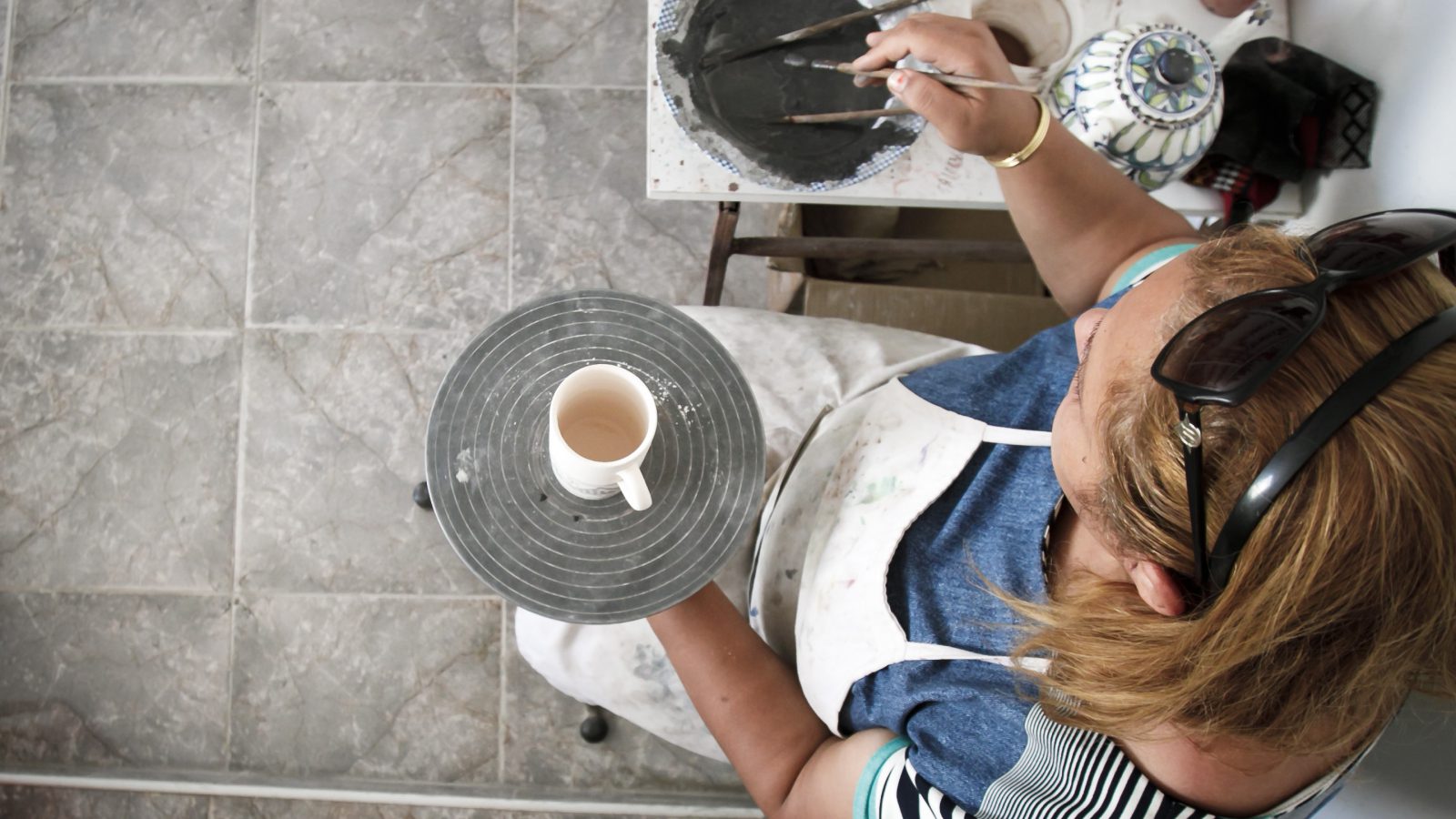 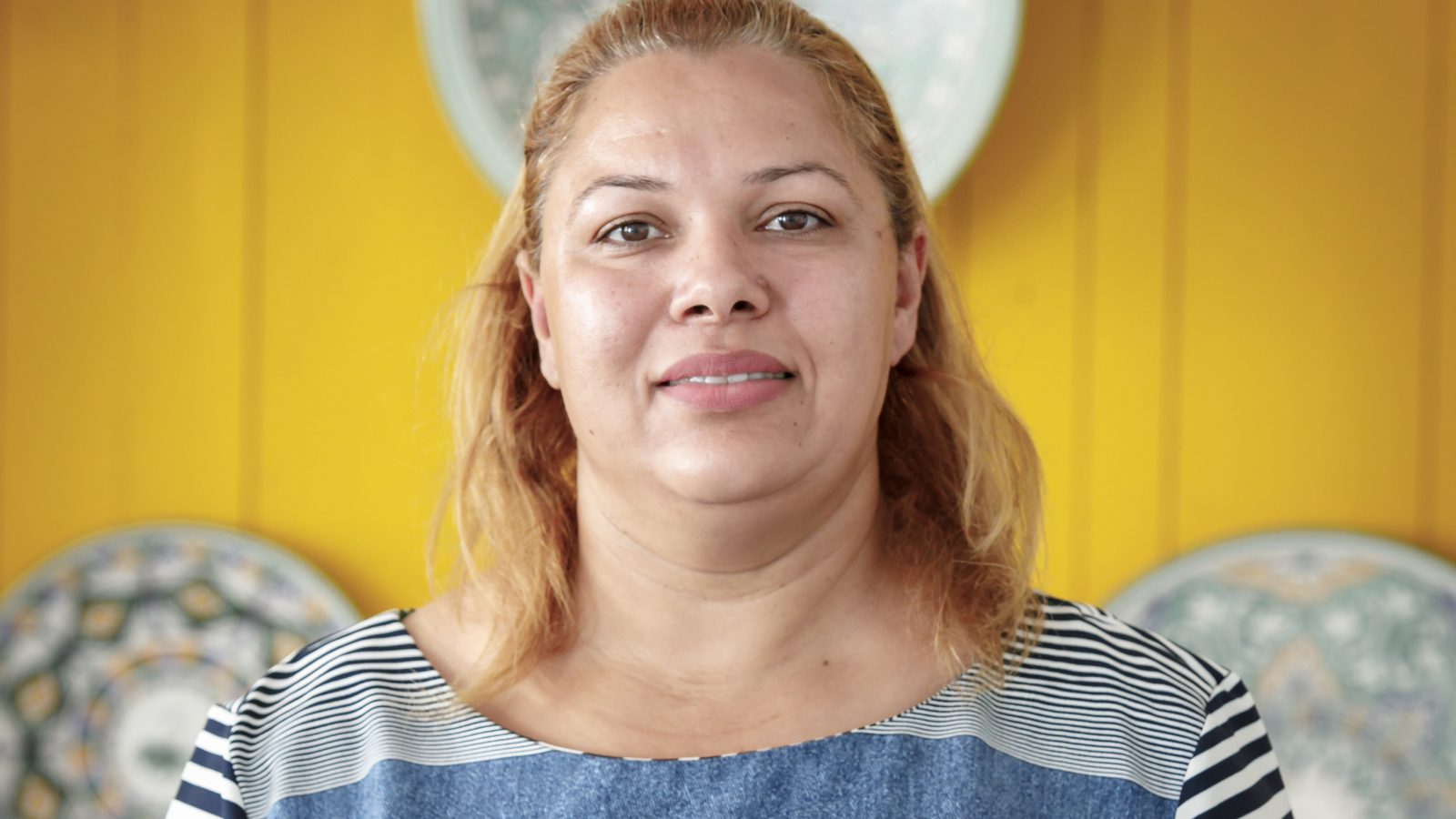 A turning point in her career

Encouraged by the project leader, Nour transformed a room in her home into a creative workshop. Upon receiving a visitor into the room, she would follow their gaze to see if one of her works hanging on the walls would capture their attention. “If my designs do not speak to anyone, it means I’ve failed,” she explains. “After finishing a new design, I make my own assessment, I analyse my works in detail.”

While glancing through an article that is part of a European order, Nour reflected on how the group has changed her life. “Before, I worked in the traditional Tunisian style. Now that I have been trained by the group in design, I’m able to develop new collections,” she says. Remaining studious and applied since her initial contact with the craftsmen, she has since gone on to master the material; making light explode, colours astonish and support multiply, and effortlessly going from one technique to another to the point of fooling critics eyes.  Even her fellow designers sometimes establish themselves by bringing to mind the technique applied.

“I am an artist and the quality of my work has rapidly earned me purchase orders from the most prestigious companies in Tunisia and abroad,” she exclaims. “Participating in the fair  in Strasbourg (France) was a turning point in my career,” testifies Nour Bellalouna. “The cluster has allowed its members to participate in more than 20 exhibitions and national and international fairs,” underlines Talel Sahmim, national coordinator of the EU-funded Creative Mediterranean project in Tunisia.

“Thanks to the program, I have learned new artistic techniques, but I’ve also learned how the whole export chain works,” she reveals. “Direct contact with European customers in Strasbourg gave me the opportunity to see how much my products are worth.”

This state of mind has greatly contributed to the renaissance in Tunisian handicrafts, a growing industry which is enjoying an increasingly important place in the economic dynamics of the region. 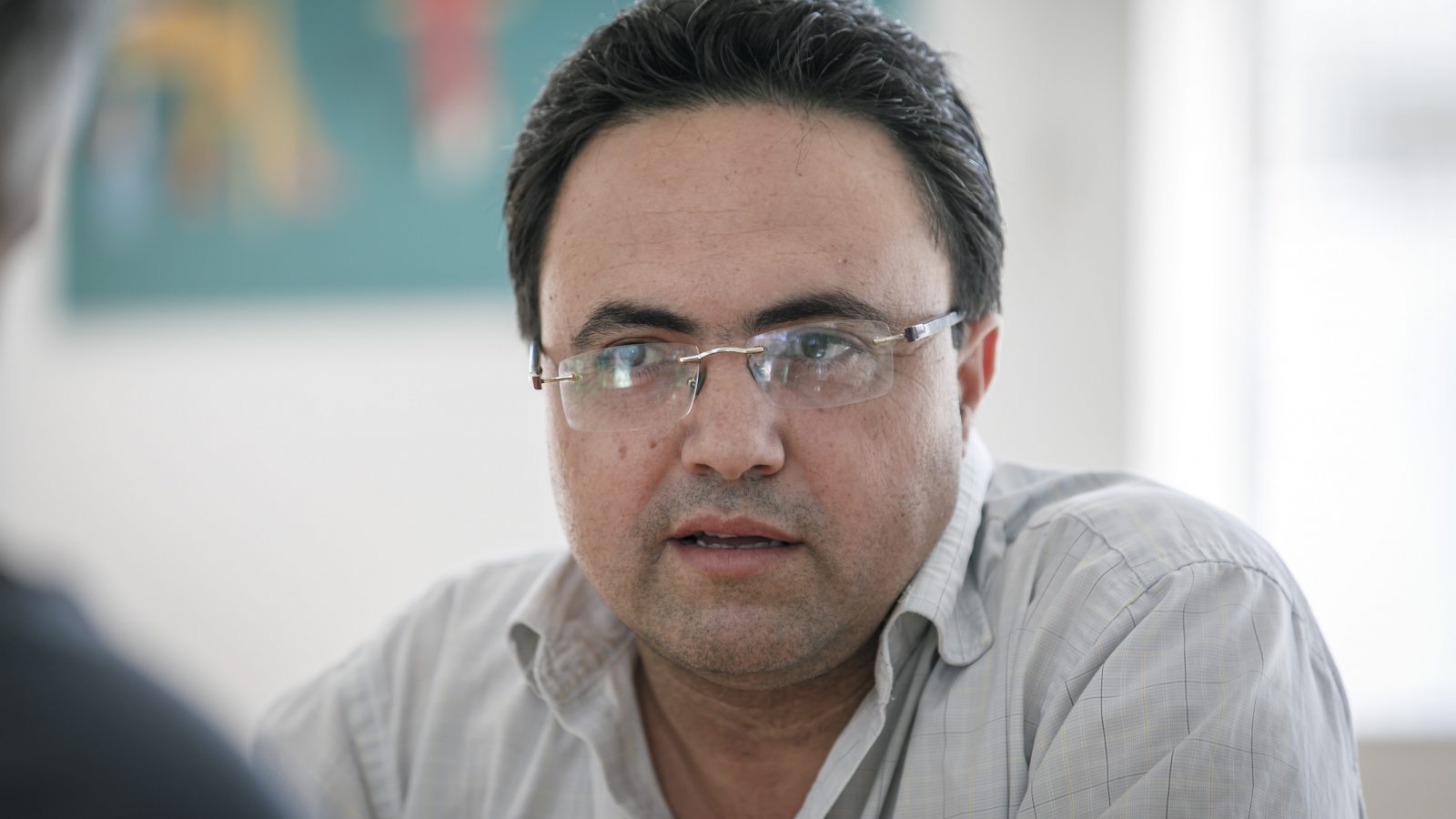 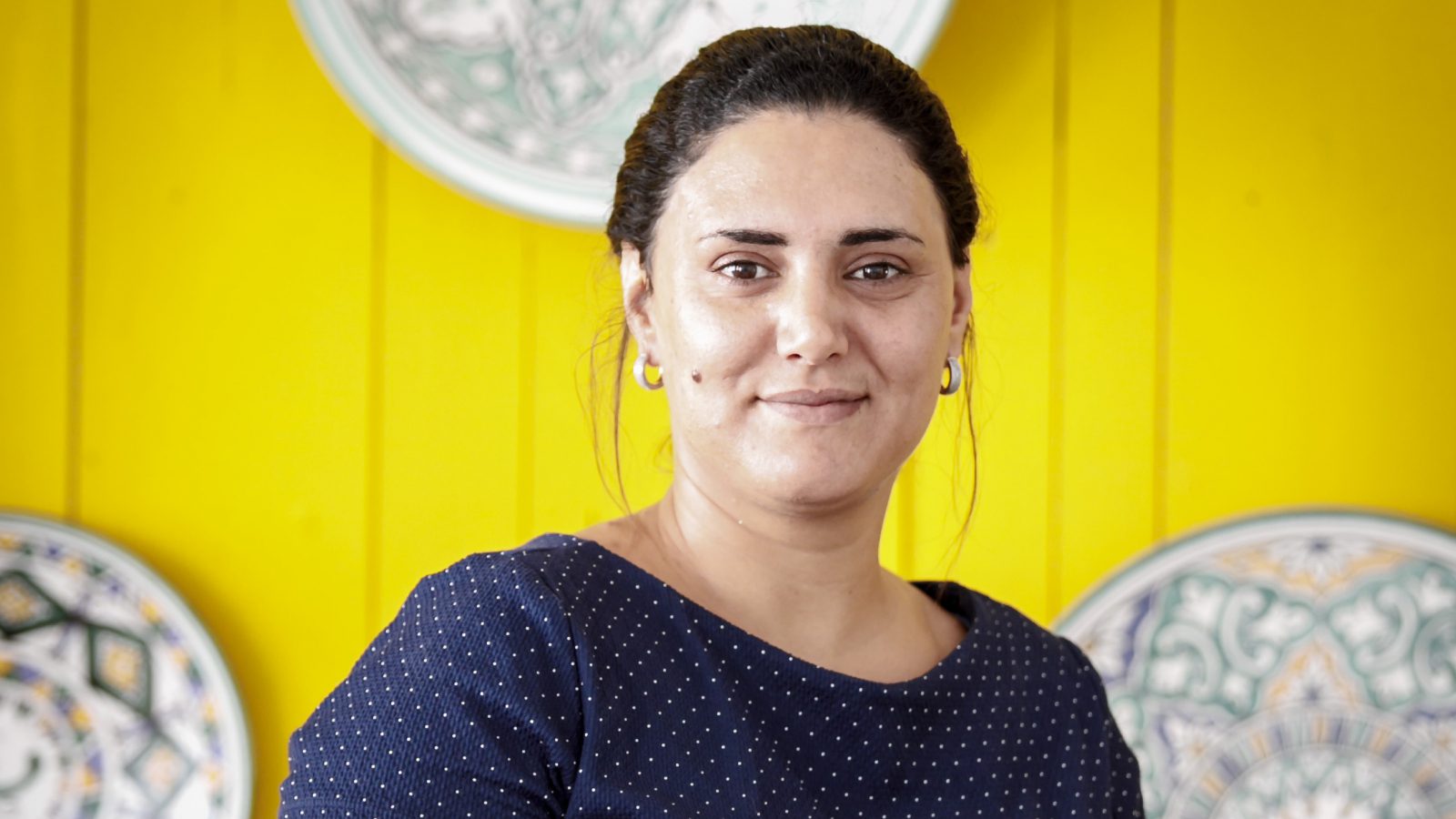 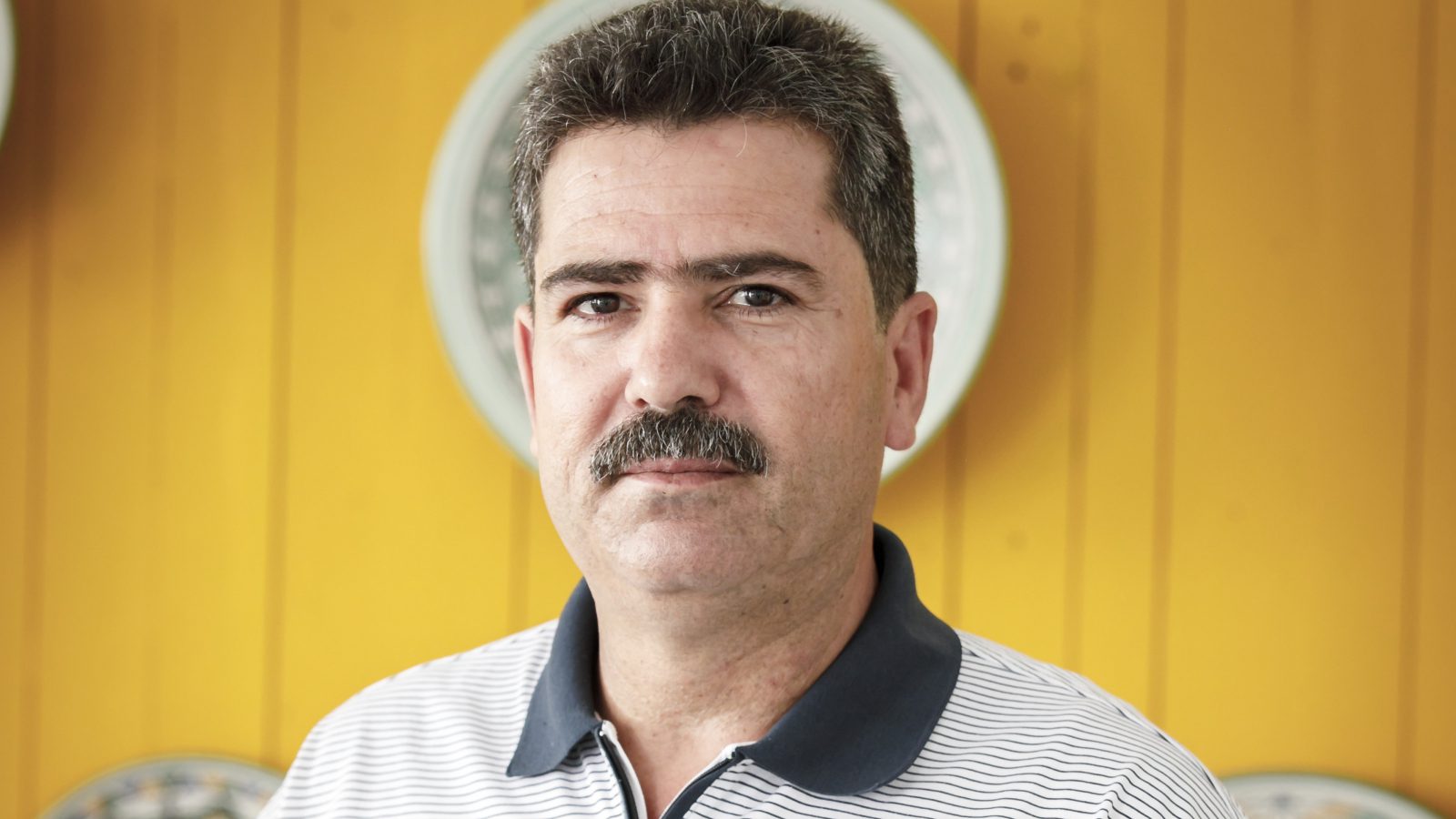 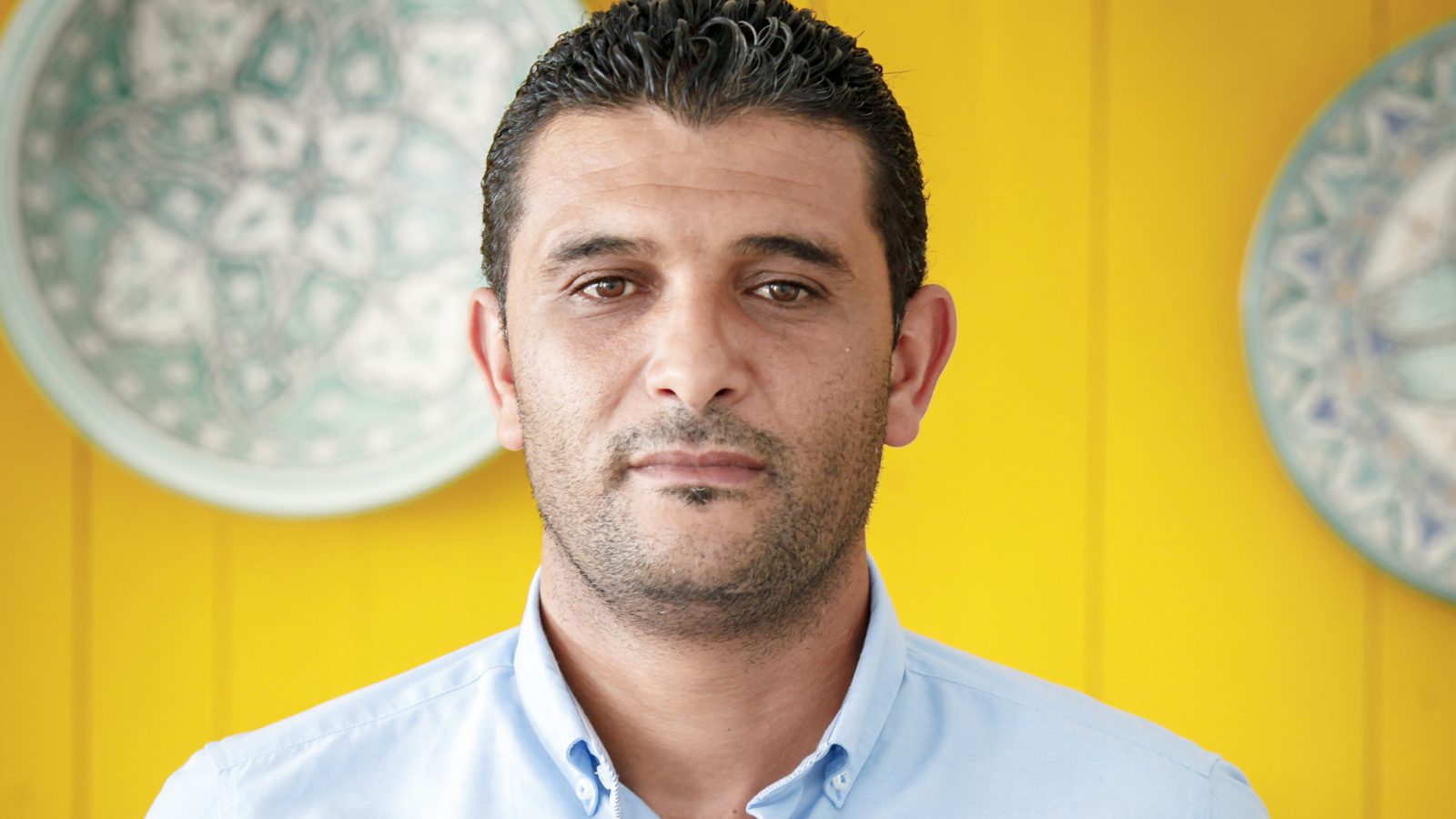 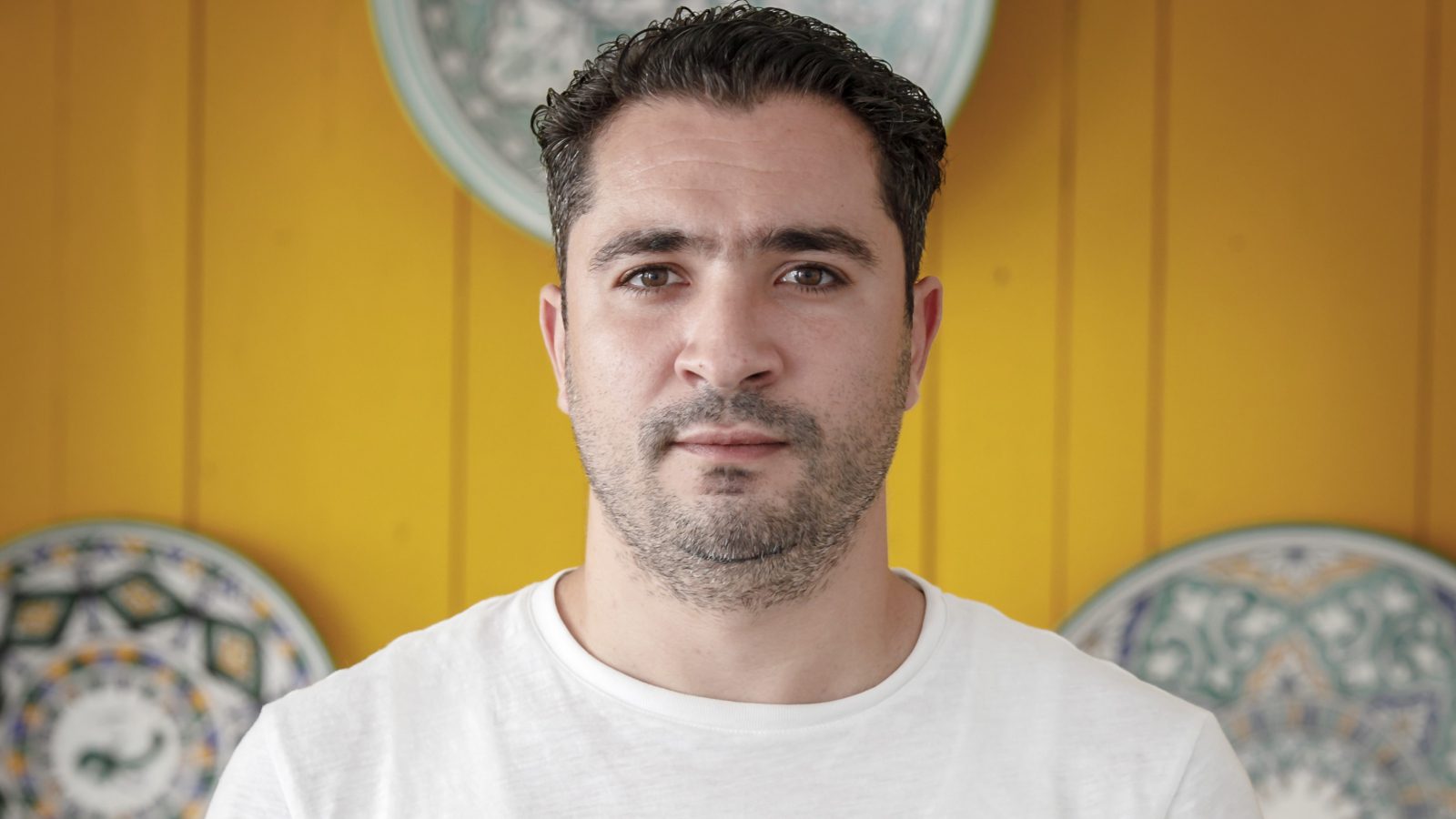 In the same context, Mohamed Riadh Zagdane, a 46-year-old craftsman with more than twenty years of experience in the handicraft sector, admits that the group has allowed him to enter a more virtuous circle of production. In fact, according to him, this project has raised the level of manual craftsmanship through the networking of craftspersons with designers. “This project also represents an excellent promotional medium growing over time, which is likely to enhance good ceramic craftsmanship promotion, necessitating direct contact with other stakeholders in the chain and therefore providing an opportunity to undertake additional promotional effort to improve the output of an industry in decline in recent years,” he underlines.

A hard blow but…

Habib Chabbouh, academic, expert, craftsman and manager of the Maison de l’Artisan, is one of the key players of the cluster. He agrees: “Before 2015, craftsmen were only copying low-quality products that they sold at prices so low that they did not even cover the cost price.” “80% of these low-end, non-value-added, easy-to-replicate items were flowing through informal channels and exhibiting strong unfair competition,” he adds. Though it was the tourism industry crisis in particular that shook the country in 2015, dealing a blow to the handicraft of ceramics. Indeed, he recalls in this regard the closure of large ceramic workshops such as The House of Crafts, which employed 250 people, and Nabeul Ceramics Society. With the disappearance of these two companies, the region turned the page on a whole generation of craftsmen.

In 2015, upon establishment of the group , “we started with a few craftsmen to expand our activities to grow today to more than 25 participating companies.” According to Mr. Chabbouh, the project has allowed craftsmen to combine their strengths to diversify their activities and show creativity and new design. He also helped provide assistance and training to those who were left to their own devices, according to his remarks. 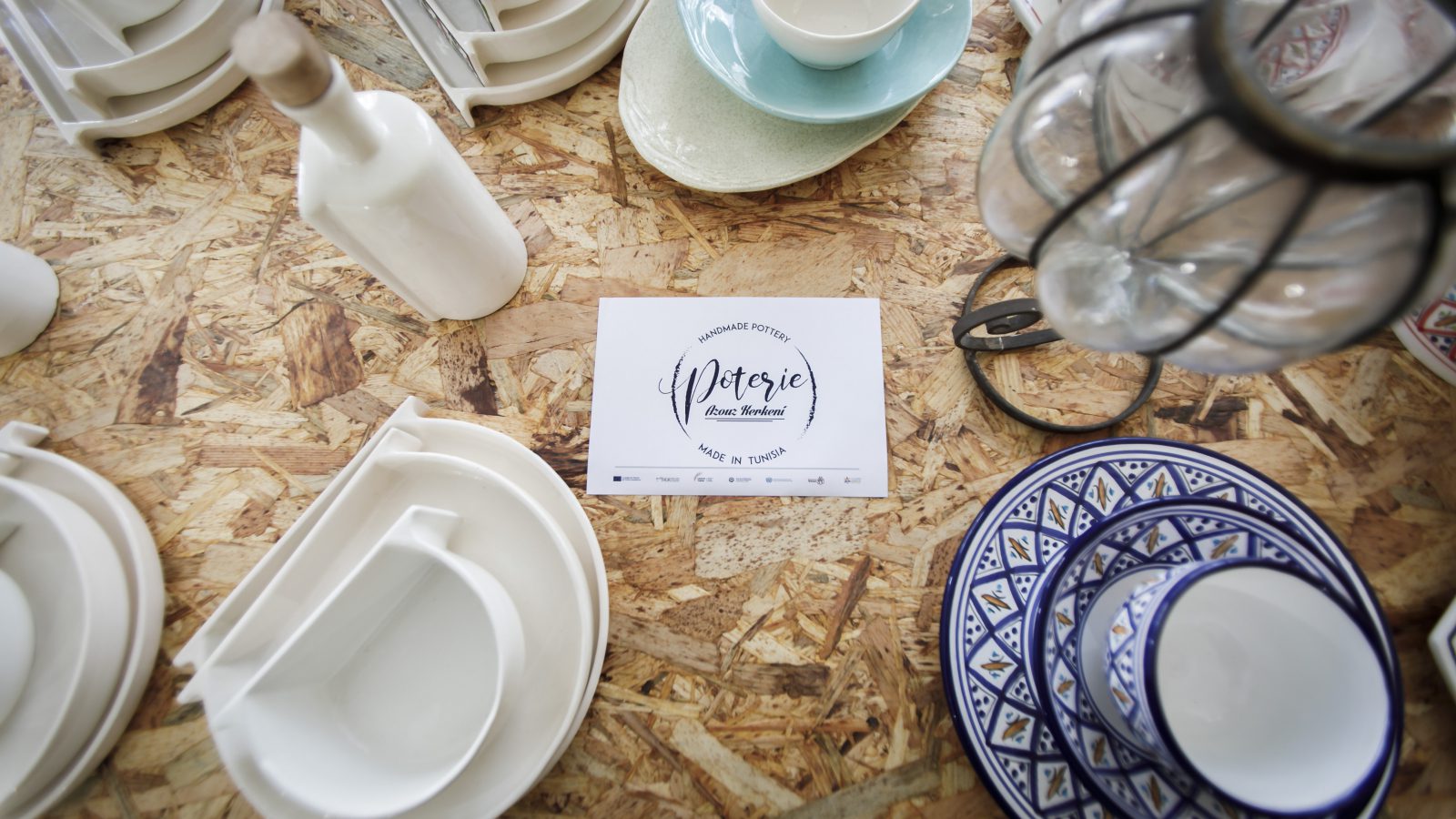 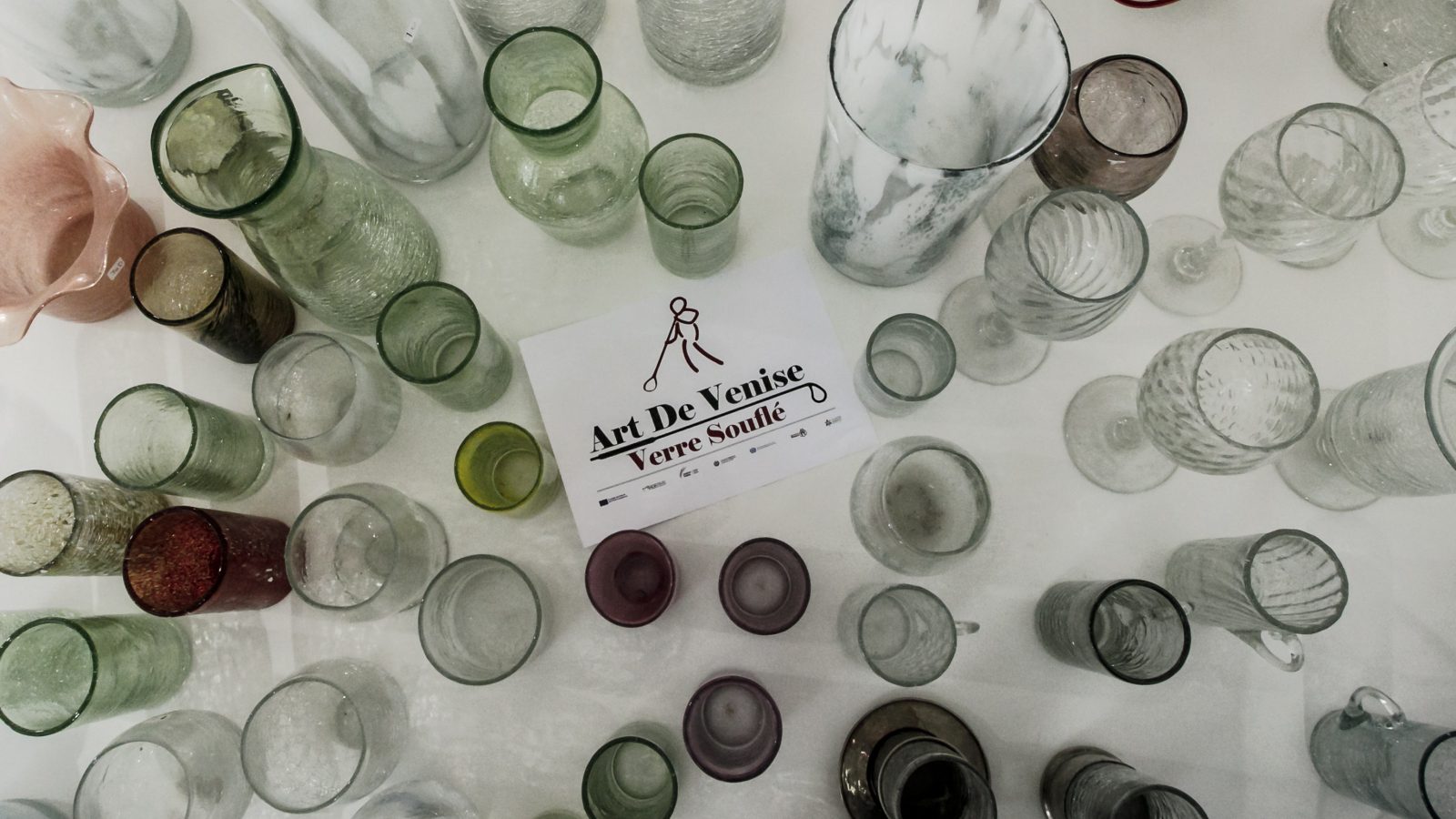 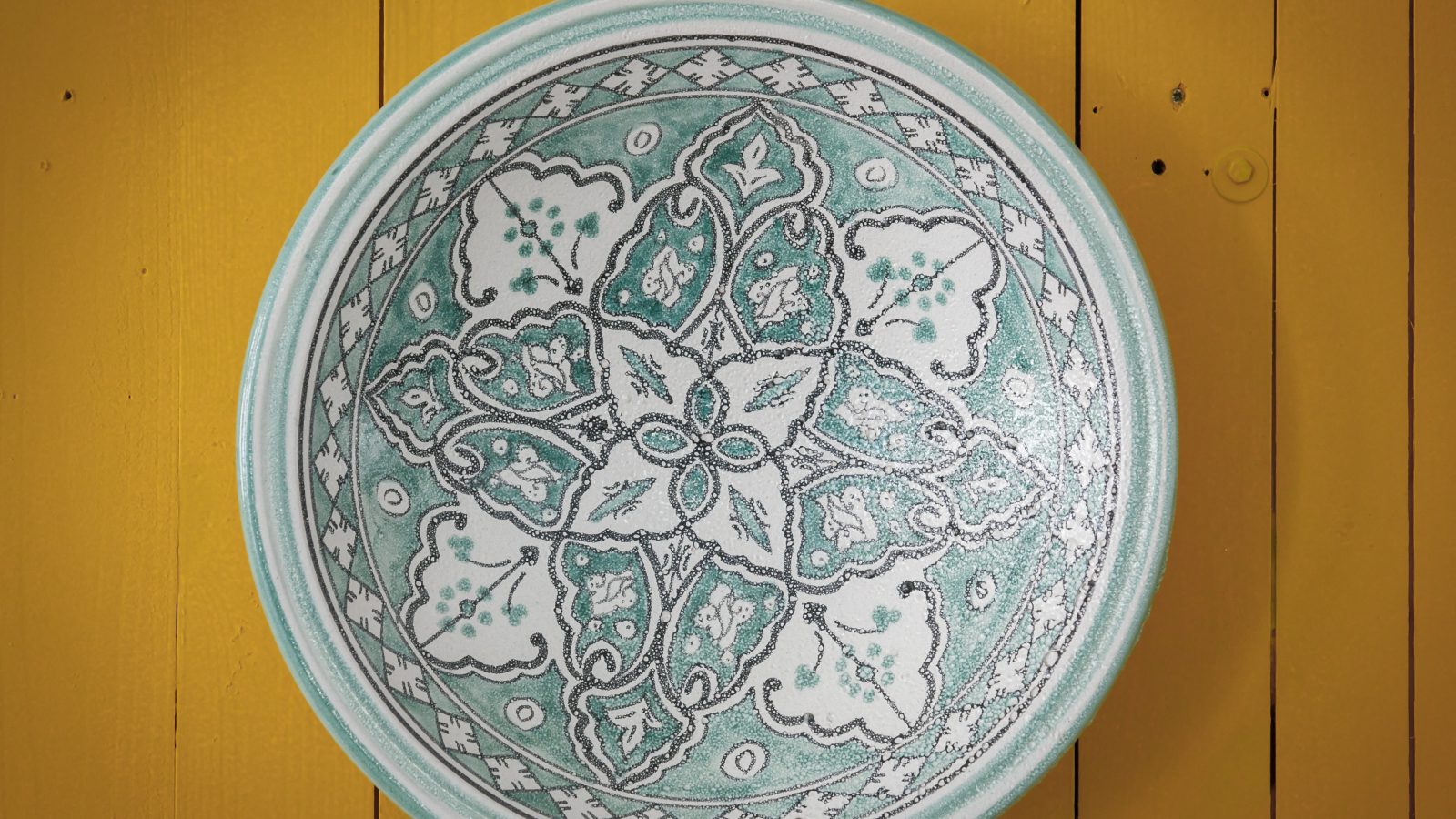 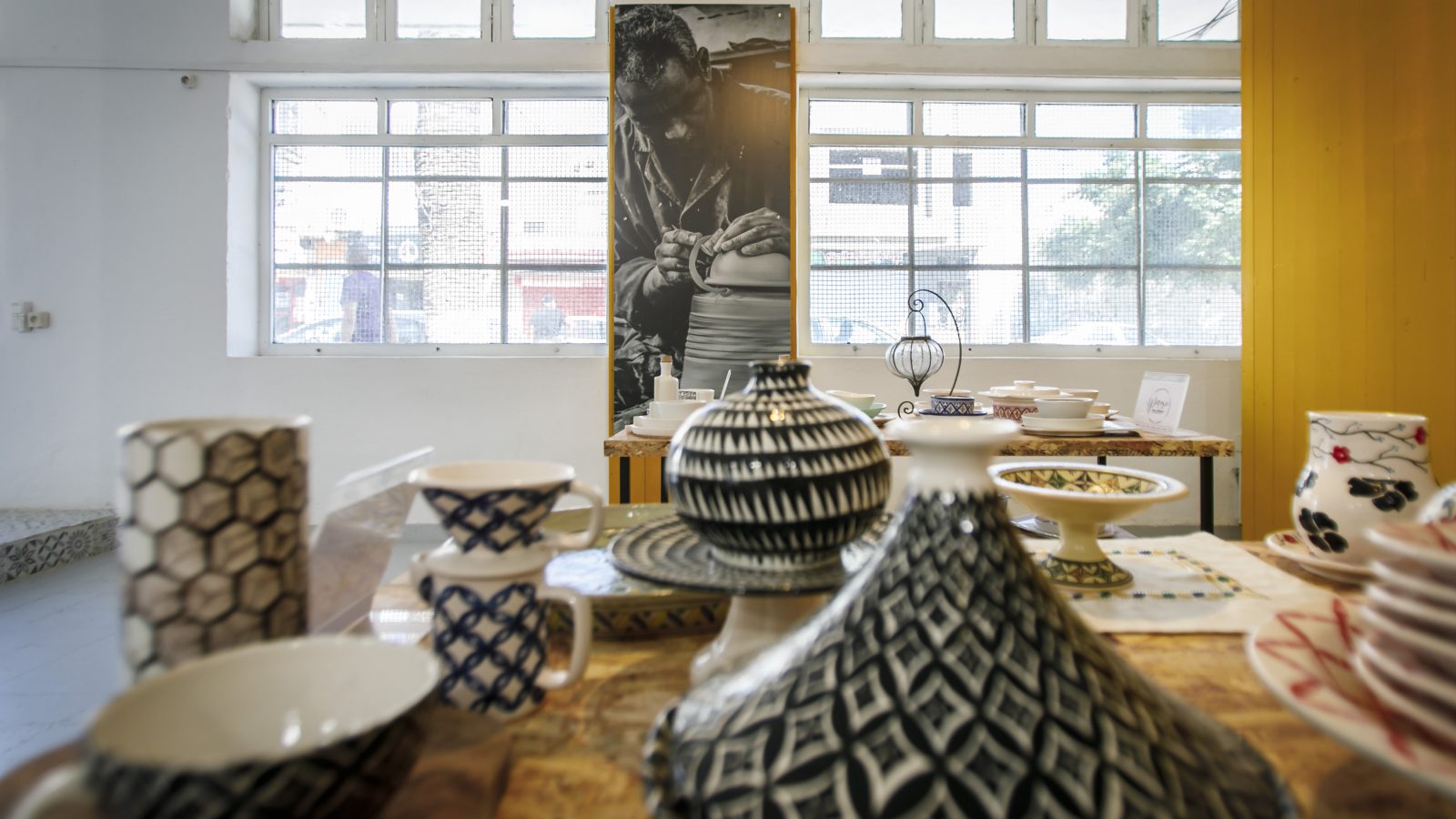 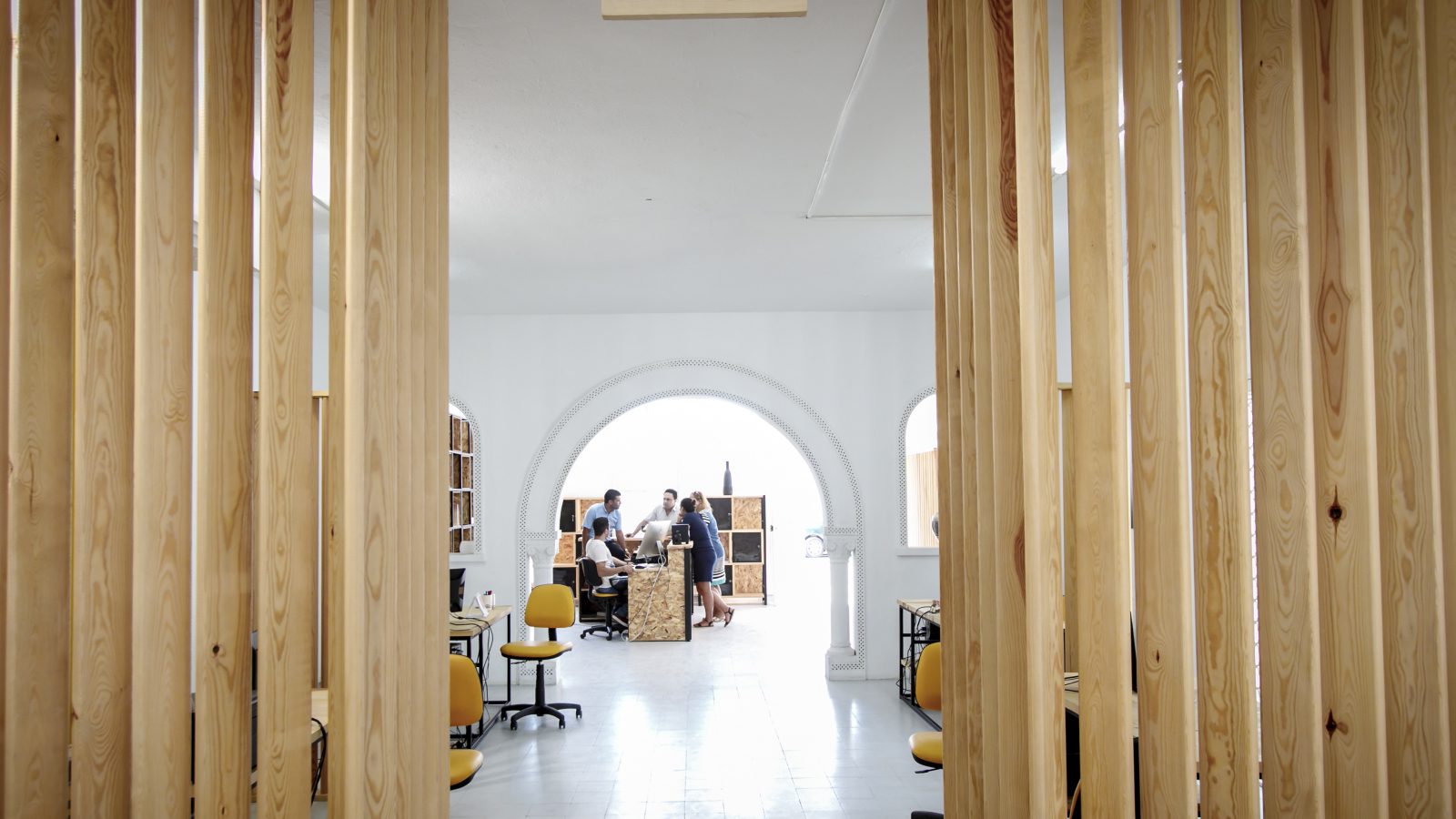 Hub Design to galvanise the concept

But now thanks to the cluster set up by the EU with funding of up to 700,000 euro, the city of Nabeul has the first Hub Design fully dedicated to tableware. Hub manager Nawel Ben Dhia describes it as, “a centre for working and co-working, for designers and companies.” According to her, this centre, which opened in May 2018, also serves as “an exhibition space for new collections to promote the export of handicrafts.” However, the main objective of this Hub can be found in research and innovation, by means of a laboratory equipped with prototyping facilities and a library equipped with an image bank with boards dating from the sixties, with an explanation of the traditional patterns described by a heritage expert.

This space is also intended to serve as a kind of incubator for the creation of new companies in the sector. According to Mme. Ben Dhia, the technical support and other free services provided allow for the galvanisation of relations between the craftsmen.

It is thanks to this new collaboration, initiated and supported by Creative Mediterranean, Tunisia, that over the years the project has been able to bring together as many craftsmen as heads of companies or even students, who together have been able to fully establish development plans, including product design, visual identity and product communication.

Talel Sahmim, national coordinator of the Creative Mediterranean project in Tunisia – a European Union funded project which targets craftsmen, designers, traders, and manufacturers in addition to a steering committee that brings together sponsors, ministries, occupational structures and observing members, proudly lists the results.

“Over the past few years we have been able to develop the production of more than 50 collections, launch a professional Master’s at the Nabeul Institute of Fine Arts, participate in more than 10 local and international exhibitions and run several campaigns to attract more young people,” he explains.

Talel adds that the results have been tangible and are illustrated by a development in the numbers of craftsmen, which have increased by 20% due to the creation of more than 100 new jobs in the sector, as well as by an increase in the supervision rate.

He also indicates that the promotional activities, development of a new glazing technology, and upgrade of the companies and networking by shared services have allowed the region to once more excel in ceramics, supplying 80% of exports of ceramic products from Tunisia; a total of 18 million dinars.

The craft has come a long way. This pilot project initiated by the European Union involves all stakeholders in the value chain and, for the first time, brings together a variety of support structures, such as the National Office of Crafts, the Nabeul Institute of Fine Arts, the Centre for Arts and Crafts, the Cap Bon Chamber of Commerce and Industry, the heads of companies, craftsmen and designers. The Nabeul group has allowed its stakeholders to combine their strengths through the unique exchange of skills and expertise, thus promoting the development and enhancement of a handicraft once in jeopardy, but which has now regained its nobility and splendour.

Today, we can pride ourselves on the fact that Nabeul, garden city, capital of ceramics, inspiration for poets, writers and novelists, has found its splendour thanks to the renaissance of this handicraft. This comprises of entrepreneurs who invest in their own expertise, custodians of ancient traditions, of proven techniques and of a culture that is enriched and adapted to follow changes in society and the tastes of their clientele.

When we know that the art of ceramics in Nabeul, a community that is surprising in its strength and adaptability to modernity and which employs 350 thousand craftsmen and contributes 3.9% to GDP, is confronted with a serious crisis due to the downturn in the tourism industry in 2015. Many craftsmen were forced to close shop because of the prevailing gloom regarding tourism and because of social unrest and terrorist attacks which shook the country at the time. A hit was also taken because of the stereotypes of the products and the industry, which has been deemed abandoned by young people because it offers few career prospects. Now, we can only applaud the tableware cluster, a rare success in an ocean of badly planned projects, which has just revived the handicraft of ceramics in Nabeul from the verge of collapse.

Thanks to this initiative, the skill of the Nabeulean craftsmen is perpetuated in the heart of the city, which today proudly displays its ceramic products and flaunts an array of new collections of ceramic items requested by the best exhibitions and fairs dedicated to tableware. The city has resumed its economic momentum after bringing the industry in line with developments through modernisation, adaptation to consumer expectations and the frequent use of new technologies to generate new projects and services that will shape the craft of tomorrow; now resolutely turned towards the future.