Cooperation, peace and security, mutual accountability and a shared commitment to the universal values of democracy, the rule of law and respect for human rights, are the founding principles of the special relationship between the EU and the Neighbourhood countries of the East and the South.

The aim of that partnership should be “to establish an area of prosperity and good neighbourliness, founded on the values of the Union and characterized by close and peaceful relations based on cooperation”, according to the Treaty on European Union. Since it was launched, in 2004, the European Neighbourhood Policy (ENP) has been strengthening relations, bringing tangible benefits to both the EU and its Neighbourhood partners, including the introduction of regional initiatives and support to democratisation.

Relations and goals will be further advanced through the European Neighbourhood Instrument (ENI), which has replaced the European Neighbourhood and Partnership Instrument (ENPI) , so that it reflects real needs and considerations that have emerged over the years. The Regulation setting up the ENI underlines that it should give support to the implementation of the political initiatives shaping the ENP, including the Eastern Partnership and the Union for the Mediterranean. Giving incentives and rewarding best performers, as well as offering funds in a faster and more flexible manner, are the two main principles underlying the European Neighbourhood Instrument (ENI) worth over €15 billion from 2014-2020. Based on the experiences gained until today, the ENI will support the European Neighbourhood Policy (ENP) and turn decisions taken on a political level into actions on the ground. Effective from 2014 to 2020. the ENI seeks to streamline financial support, concentrating on agreed policy objectives, and make programming shorter and better focused, so that it is more effective. The ENI will build on the achievements of the European Neighbourhood and Partnership Instrumentt (ENPI) and bring more tangible benefits to both the EU and its Neighbourhood partners. It has a budget of €15.433 billion and will provide the bulk of funding to the European Neighbourhood countries through a number of programmes. The 16 ENI Partner Countries are: * EU Cooperation with Syria is currently suspended due to the political situation ** This designation shall not be construed as recognition of a State of Palestine and is without prejudice to the individual positions of the Member States on this issue. Relations with Russia: Russia has a special status, as relations with this country are not developed through the ENP, but a strategic partnership covering four “common spaces”. Therefore it is only eligible for ENI regional and Cross-Border Cooperation programmes, for which it co-finances projects. Bilateral cooperation with Russia is funded under the new Partnership Instrument (PI). 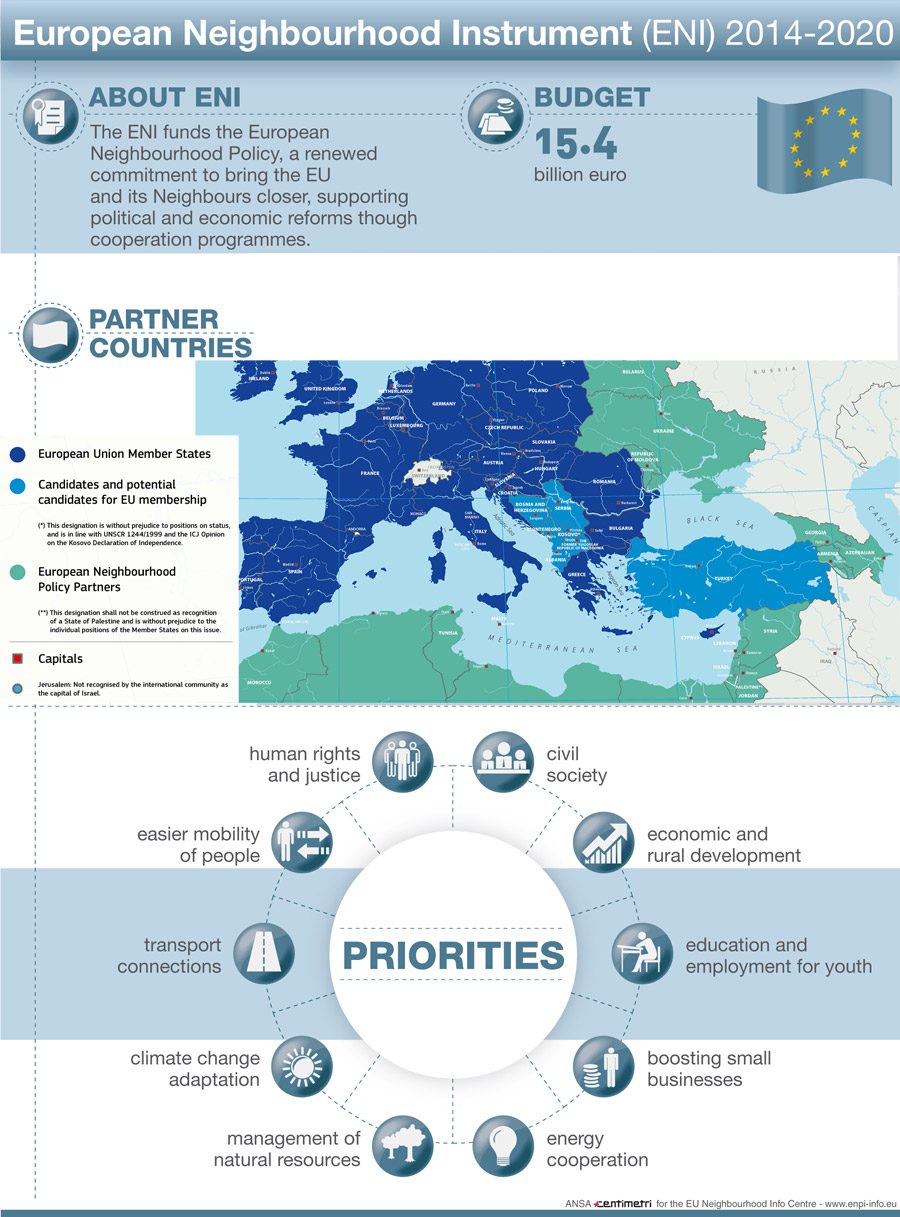 What makes this instrument more effective, is that, under the ENI, assistance to Neighbours will: The ENI will also encourage closer links between the EU and partner countries to enable their citizens to participate in successful EU internal programmes, such as on student mobility, youth programmes or support to civil society. Special emphasis will be given to engagement with civil society. This funding instrument, that responds to the evolving relations between the EU and its partner countries, will continue to ensure the success of the democratisation process and improve economic and social development in the EU’s immediate neighbourhood. Itwill support the reform process already undertaken by the partner countries themselves. 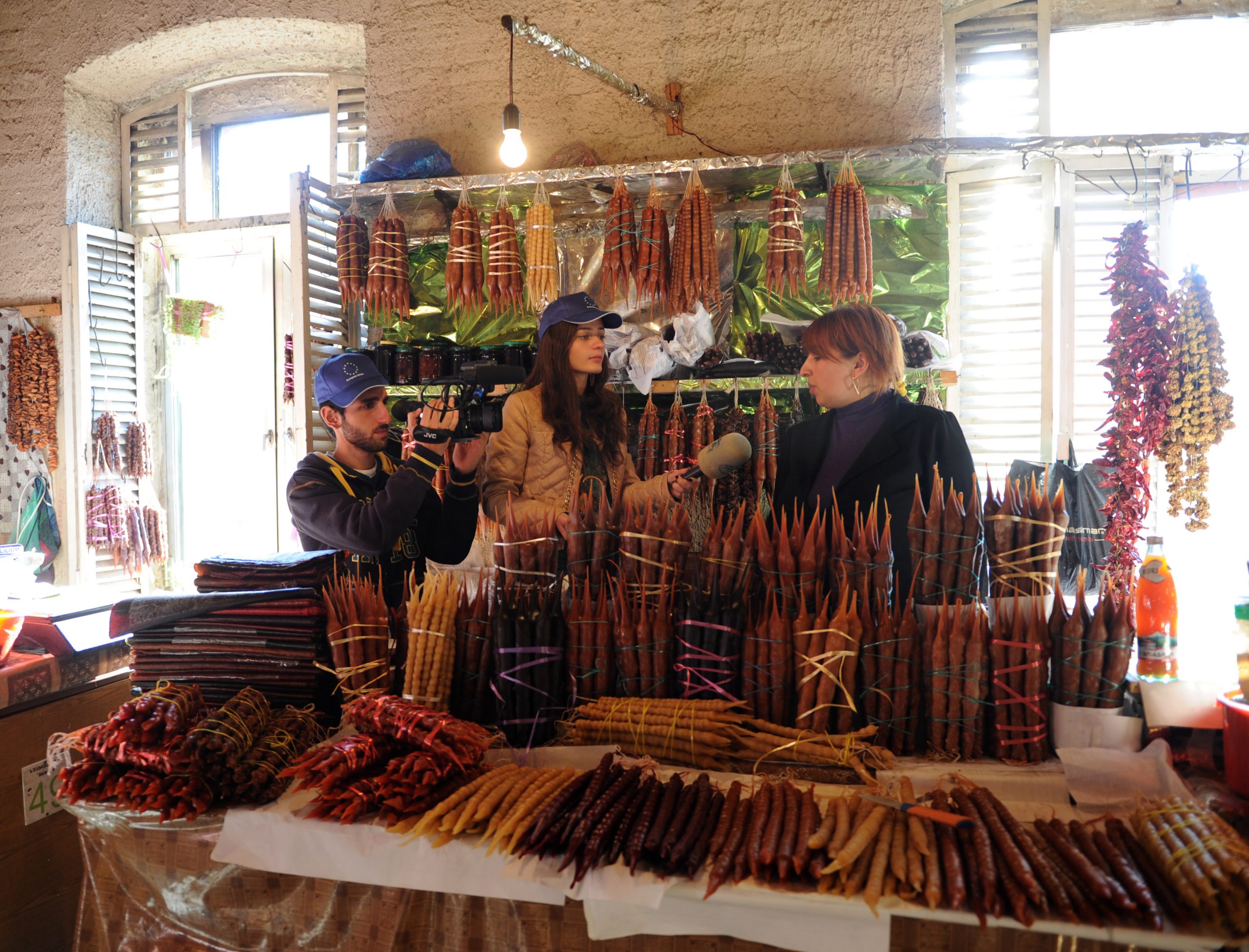 How support is given

Support through the ENI is programmed and given in three different ways: The Regulation setting up the ENI elaborates on the way it will work and the priority areas. Detailed information about each programme can be found in Annex II of the Regulation. More types of support and other programmes are available to the Neighbourhood.

Some of the ENI cooperation areas that will be given high priority are:
Details about the priorities under the bilateral, the multi-country and the cross border cooperation programmes can be foundin Annex II of the ENI Regulation.

Through the ENI, the EU seeks to support the strengthening of the capa­city of civil society organisations to guarantee effective domestic accountability and local ownership, and to play a full role in the democratisation process. According to the ENI Regulation, external action partners, including civil society organisations and local authorities, are involved in preparing, implementing and monitoring EU support, given the importance of their roles. Furthermore, civil society organisations are called upon to participate in the development of the three financial programmes – the bilateral, the multi-country and the cross border cooperation – and will be, together with local and regional authorities, their main benefici­aries. A clear demonstration of the backing offered to civil society is the fact that support may even be increased, in case there is a serious regression in the country. More specifically, the ENI Regulation stipulates that the support and the amounts given to partner countries will be based on their progress achieve and thus can be reconsidered. However, this incentive-based approach shall not apply to support to civil society, people-to-people contacts, including cooperation between local authorities, support for the improvement of human rights, or crisis-related support measures. In the event of serious or persistent regression, such support may be increased, it underlines.

From the ENPI to the ENI

The ENI will be replacing the European Neighbourhood and Partnership Instrument – known as the ENPI. ENPI funding approved for the period 2007-2013 was €11.2 billion.

The European Neighbourhood Policy (ENP) aims at bringing Europe and its neighbours closer, supporting political and economic reforms in sixteen of Europe’s neighbouring countries as a means of promoting peace, stability and economic prosperity in the whole region. It is designed to give greater emphasis than previously to bilateral relations between the EU and each neighbouring country. The bilateral Action Plans are the main documents guiding the partnership between the EU and its partner countries participating in the ENP. This political document reflects the priorities agreed between a country and the EU and spells out the planned economic and political reforms with short and medium term priorities. More information can be found in the ENP section of this website.