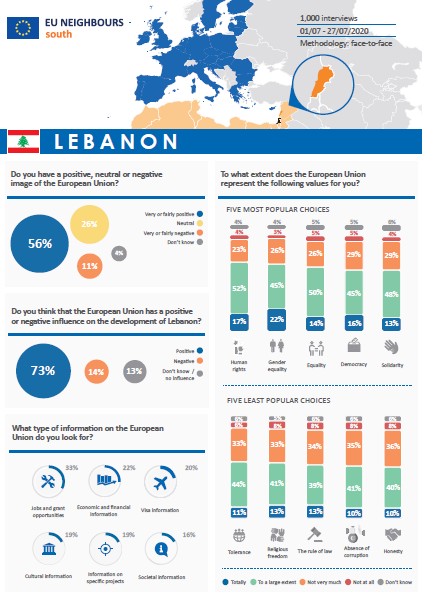 Lebanese feel their country has good relations with the EU, new poll finds

Most Lebanese feel their country has good relations with the European Union (71%), and that the EU has a positive influence on the development of Lebanon (73%), with 84% of those who knew that the EU provided financial support to Lebanon saying it was effective – just some of the findings of the latest annual opinion poll in Lebanon, published by the EU Neighbours South project.

The survey – part of a wave of opinion polls carried out in eight southern Mediterranean partner countries – was conducted in Lebanon in July 2020, with 1,000 people consulted in face-to-face interviews. Respondents were asked about their general perceptions of the EU and the values with which it is associated, about EU relations with their country, and the impact of EU financial support, including in supporting their country’s response to the COVID-19 crisis. The surveys also look at preferred sources of information, how people feel about their personal situation and the situation in their country, and their expectations for the future.

In general, Lebanese perceptions of the EU were above the regional average of the four Mashrek countries.

Asked to describe relations with the EU, 71% said they were good, above the average of 67% in the Mashrek (59% in the Maghreb).

61% of respondents saw the EU as an important partner for Lebanon, with sufficient common values to cooperate (63%).

In more general terms, more than half (59%) of those asked had a positive image of the EU, compared to the Mashrek average of 47% (Maghreb 45%), while 26% had a neutral image and 11% a negative image. The values most frequently associated with the EU were human rights, equality between men and women; those least associated with the EU were honesty and absence of corruption.

Lebanese feel EU support has contributed the most in the areas of education (37%) and infrastructure development (23%), and are keen for the EU to play an even greater role in health and human rights. When asked about the support provided by the EU to their country during the Coronavirus pandemic, citizens in Lebanon answered that it had been effective (74%).

Most Lebanese are no longer satisfied with their lives (26%, compared to 59% last year, and compared to an average of 61% for the Mashrek, and 60% for the Maghreb). They are very worried about the economic situation in their country (97% feel it is bad, compared to 67% in the region). 67% also think their life in general will get worse (5% think it will get better, and 23% think it will be more or less the same).

To find out more about EU – Lebanon cooperation and partnership, go here.

EIB at a glance