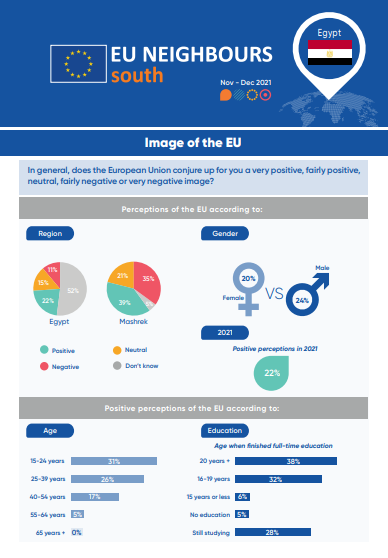 Younger Egyptians know more about the EU than their older peers.

44% of respondents associate the EU to Equality Gender Equality, followed by 41% who associate it to Peace and Security, 41% to Human Rights, 38% to Democracy, and 38% to Freedom of Speech.

Respondents in Egypt were most aware about the EU’s support to the healthcare system, followed by support to refugees and displaced people (24%), support for social protection (23%), and agriculture and rural development (20%), culture (20%). 20% were aware of EU support towards the COVID-19 pandemic, among which 87% believe that the support was effective.

21% of respondents in Egypt believed that the tourism is the area where the country benefited the most from EU support. Healthcare came second to tourism with 18%, followed by gender equality (15%) and health (15%). Likewise, 33% of respondents said that tourism is the area where more support is needed, followed by trade and investment (32%) and health (29%).

This survey – part of a wave of opinion polls carried out in eight southern Neighbourhood partner countries – was conducted in Egypt between July and September 2021, with 1,000 people consulted in face-to-face interviews. Respondents were asked about their general perceptions of the EU and the values with which it is associated, about EU relations with their country, and the impact of EU financial support, including in supporting their country’s response to the COVID-19 crisis. The surveys also look at preferred sources of information, how people feel about their personal situation and the situation in their country, and their expectations for the future.