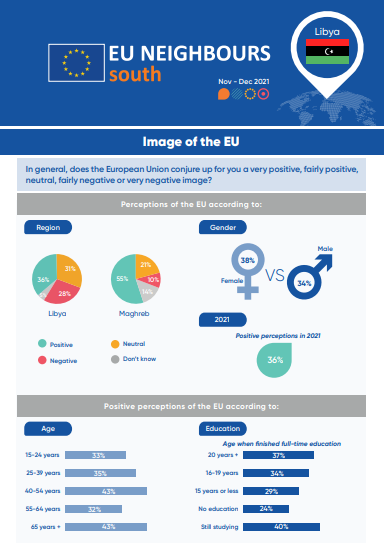 Respondents in Libya were able to give on average  2.45 correct answers over a total of six questions asked about the EU on average, reflecting a high ‘objective’ understanding of the EU, in fact, the second-highest in the entire Southern Neighbourhood region. Close to 60% of respondents knew that the EU has a parliament elected by its citizens. Close to 70% knew that the EU is a political and economic union of 27 European countries. 53% knew that the EU’s headquarters were in Brussels.

In Libya, respondents are most aware of the EU’s support to refugees and displaced people (63%), followed by human rights (59%), health (50%), economic reform or business and SME support (44%), and civil society (39%). 47% of respondents in Libya were aware of the EU’s support in response to COVID-19, and among those 80% believe that it was effective.

In Libya, 19% think that the EU’s support was most beneficial in Human Rights, 18% in humanitarian aid, 13% in health, 9% in promoting peace and stability, and 9% in trade and investments. Respondents believe that more support is needed from the EU in Human Rights (60%), Humanitarian Aid (59%), and Health (57%).

This survey – part of a wave of opinion polls carried out in eight southern Neighbourhood partner countries – was conducted in Libya between July and September 2021, with 1,000 people consulted in face-to-face interviews. Respondents were asked about their general perceptions of the EU and the values with which it is associated, about EU relations with their country, and the impact of EU financial support, including in supporting their country’s response to the COVID-19 crisis. The surveys also look at preferred sources of information, how people feel about their personal situation and the situation in their country, and their expectations for the future.