The Palestinian company Al Ard received two awards this year as the largest Palestinian exporter of oil and agricultural products. The European Union (EU) has supported the company in its bid to promote the agriculture and export sector, and the aim was to achieve profits for the company and to return the benefit to the economy in general within the principles of fair trade and environmental protection. 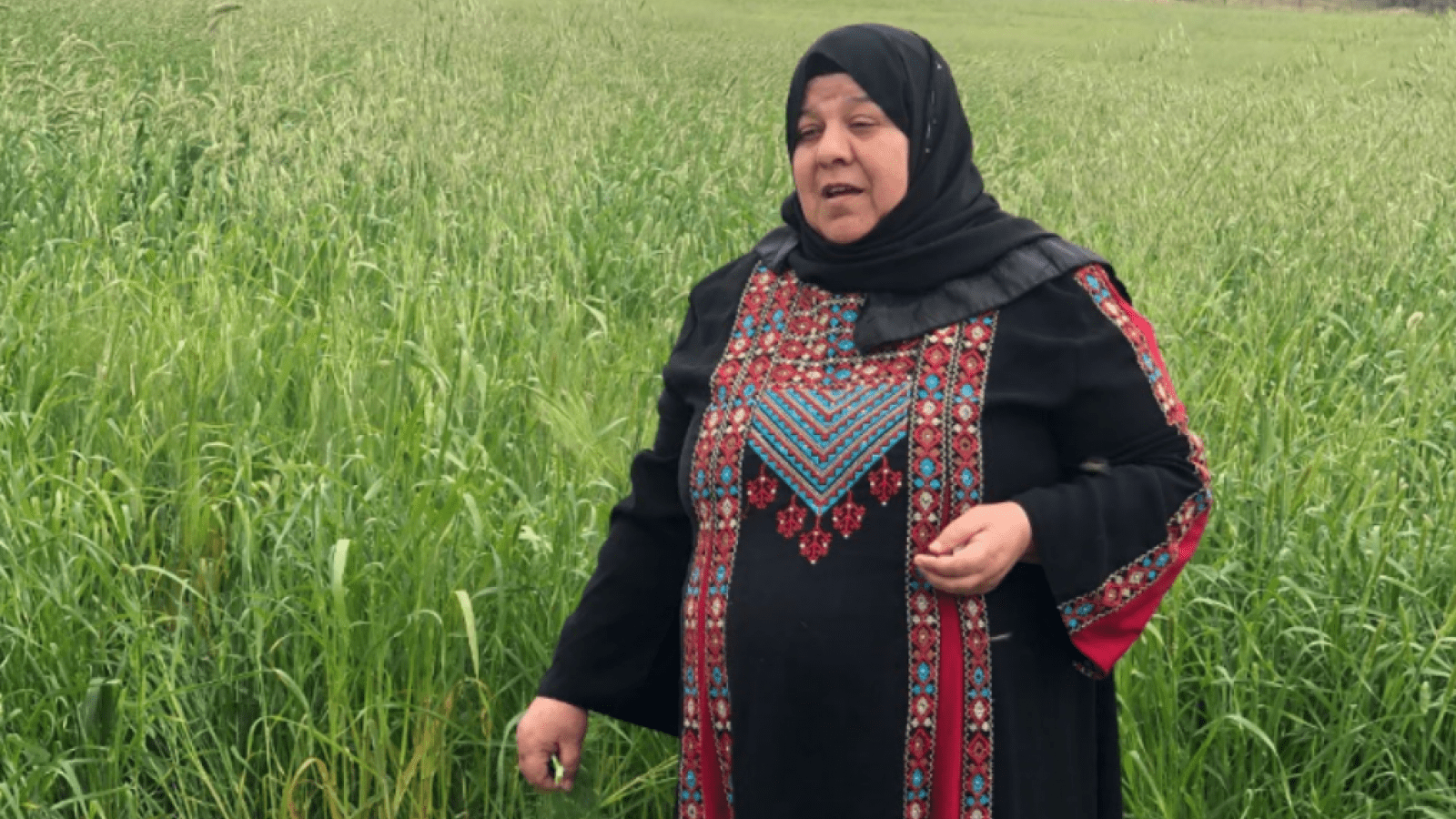 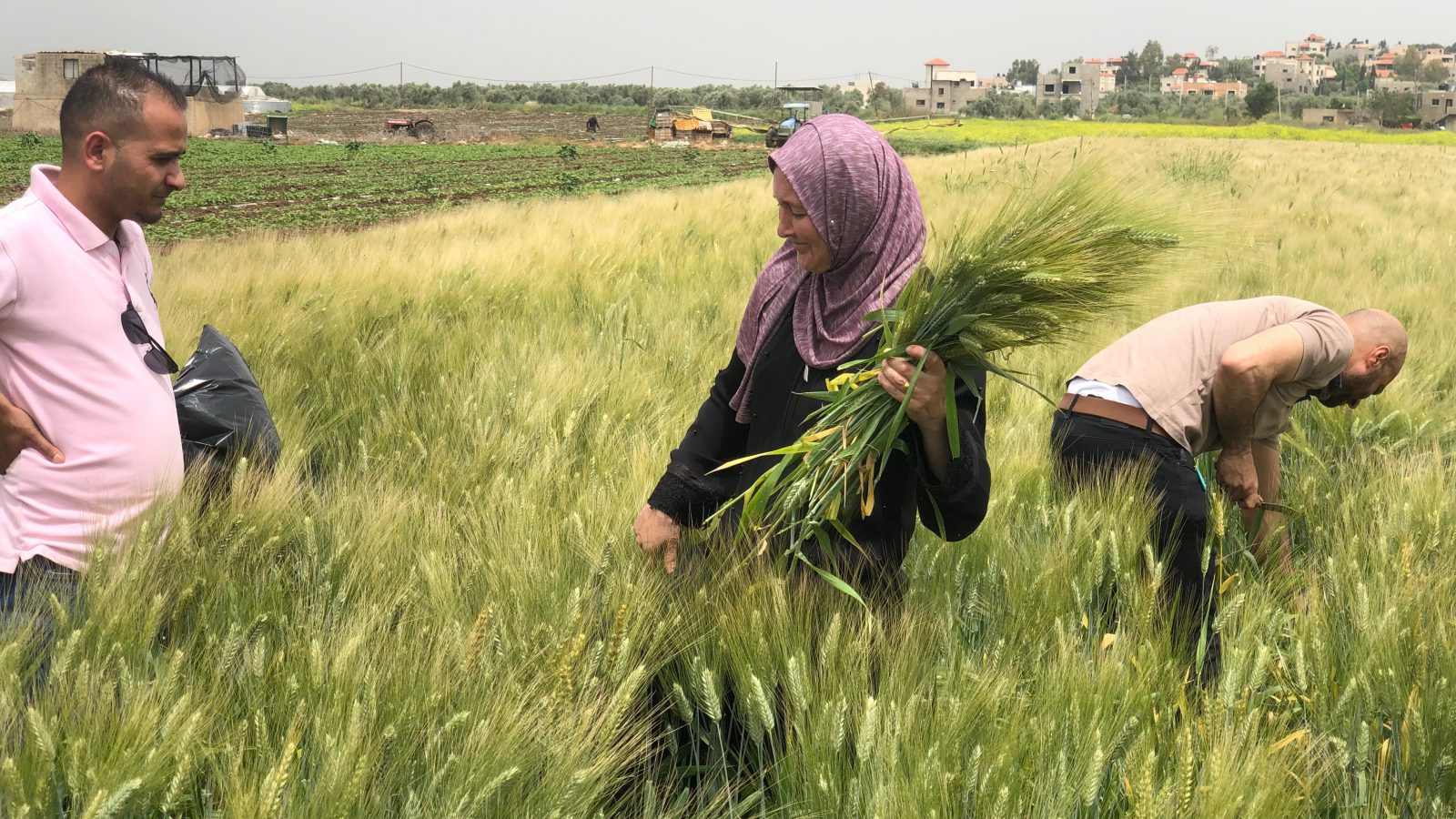 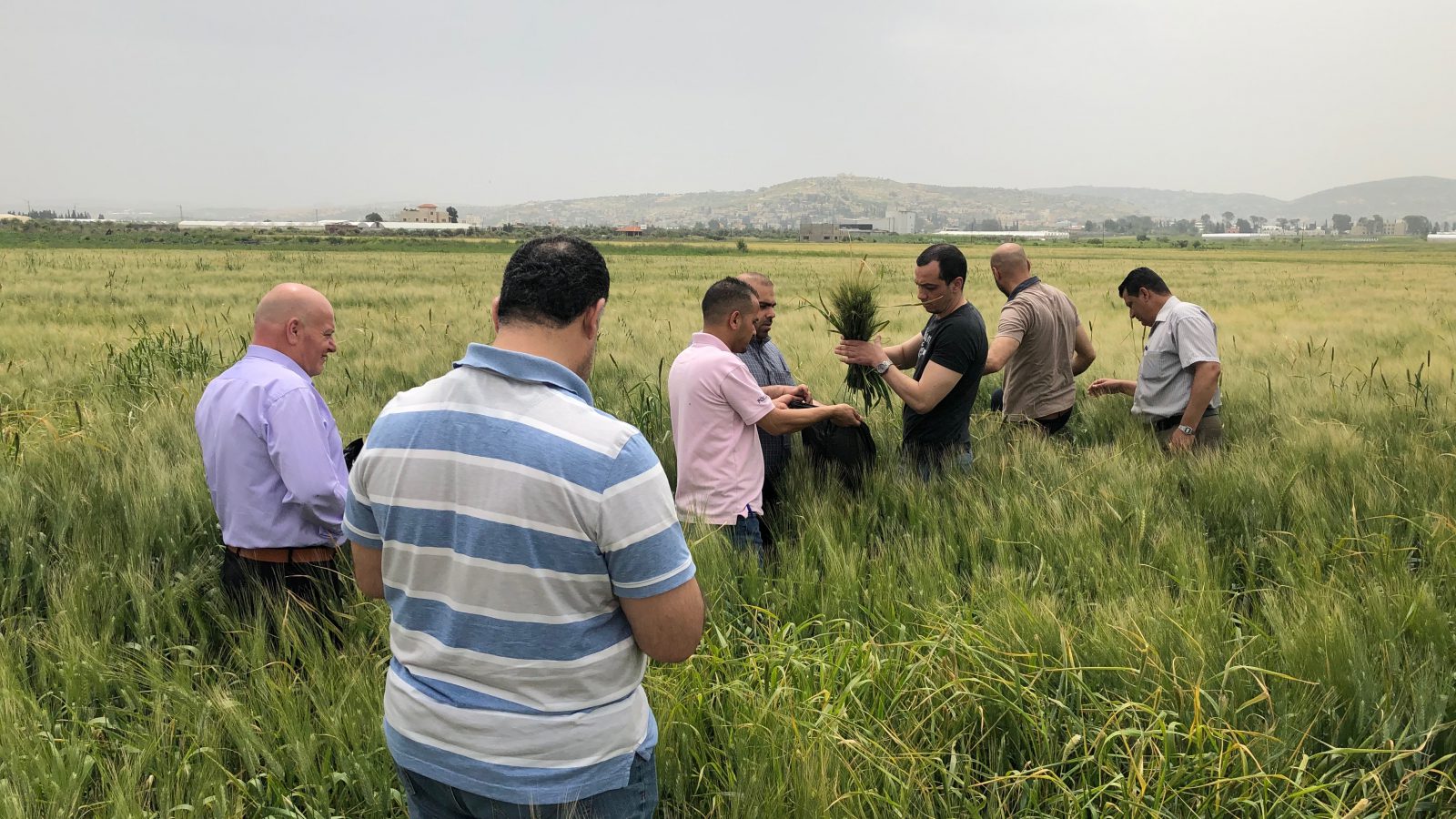 “The story began when I used to go to work with my father at the company’s headquarters and the factory that we own” says Subhi Anabtawi, the business development manager, opening his speech, “So I am considered to be third-generation in this establishment. I was a child when my father used to let me join the workers and roam the corridors of the company to learn and gain experience. Since then I have loved this factory and have felt a connection to it and to its future. Despite being separated from it for a period when I travelled overseas for university, my ambition was always to return and to work in the family project and to develop it. It is worth noticing that agriculture in Palestine suffers from many challenges, including climate change, scarcity of water resources and continued land expropriations. These obstacles have led private companies and the Ministry of Agriculture to try to devise new methods to mitigate the impact of successive and continuous crises faced by farmers and to keep pace with global production.”

Subhi continues: “Fortunately, our field of work is connected to Palestinian agricultural products and, in particular, olive oil. I thought that it would be fantastic to combine this healthy product with high quality production, especially as Palestine is famous for the best olive oil in the world. The most important thing in my view was not just to achieve profit for the family project, but to benefit the farmers in developing their methods.”

Subhi recalls the beginning of Al Ard project, saying: “In 2000 my father gave a press interview as he held the post of CEO of the Anabtawi Group, and he was asked at the time about what he was doing to support the Palestinian economy. He replied that he was supporting the economy through his company, but he was not happy with this reply. We, as a family, have always been concerned with the value of helping the community. He then decided to change the business into something greater than just an importer. At the time, the environment was favourable to the creation of a Palestinian product with a personality and an identity to compete at an international level based on its identity and heritage. This is exactly what my father wanted to do: something real to promote the Palestinian economy. At the time he was trading in tobacco and vegetable oils, and he decided to consider switching to olive oil, the quality of which is agreed upon worldwide.

So, Al Ard project was founded as a company mostly producing olive oil, in addition to other natural products such as soap, freekeh (green durum wheat), maftoul (bulghar wheat rolled in wheat flour), sage and thyme. We have always relied on farmers from the regions of the West Bank in Palestine such as Jenin, Deir Istiya and the villages of Sarra and Tell. We have also relied heavily on women’s groups and have created partnership agreements.

I was studying at university at the time. My first real experience in this industry was when I decided to sell Al Ard products at a festival in Canada. I was enthusiastic about the idea and I rented a table and displayed our company products on it, and I started to raise awareness and advertise. I was so happy with the modest financial return that I made. It helped to pay my accommodation costs at university, and I felt proud of myself and of our Palestinian products. That was when I realised the extent of my love and passion for this business. I couldn’t see myself doing anything other than grow and develop this company.”
/p> 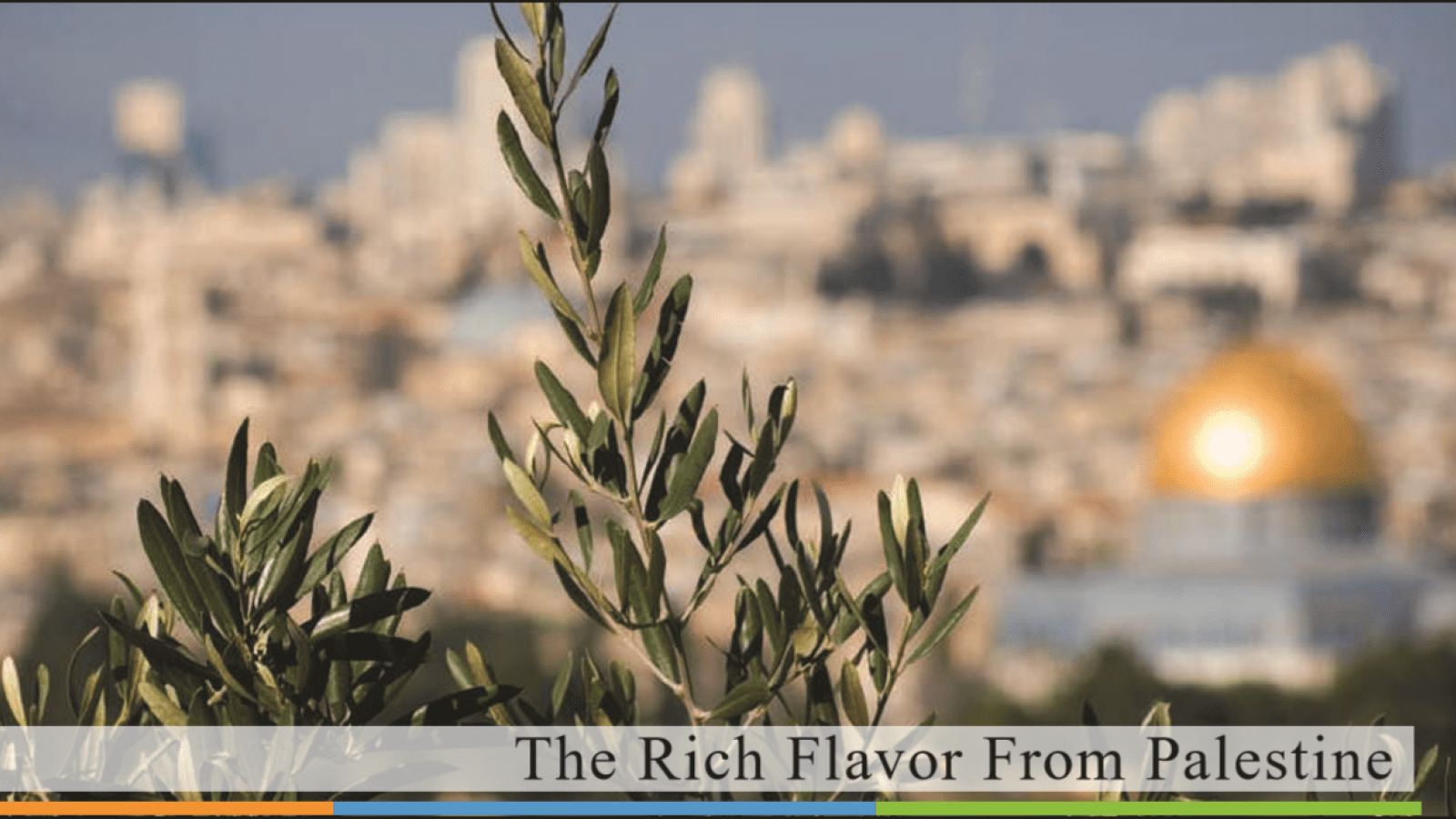 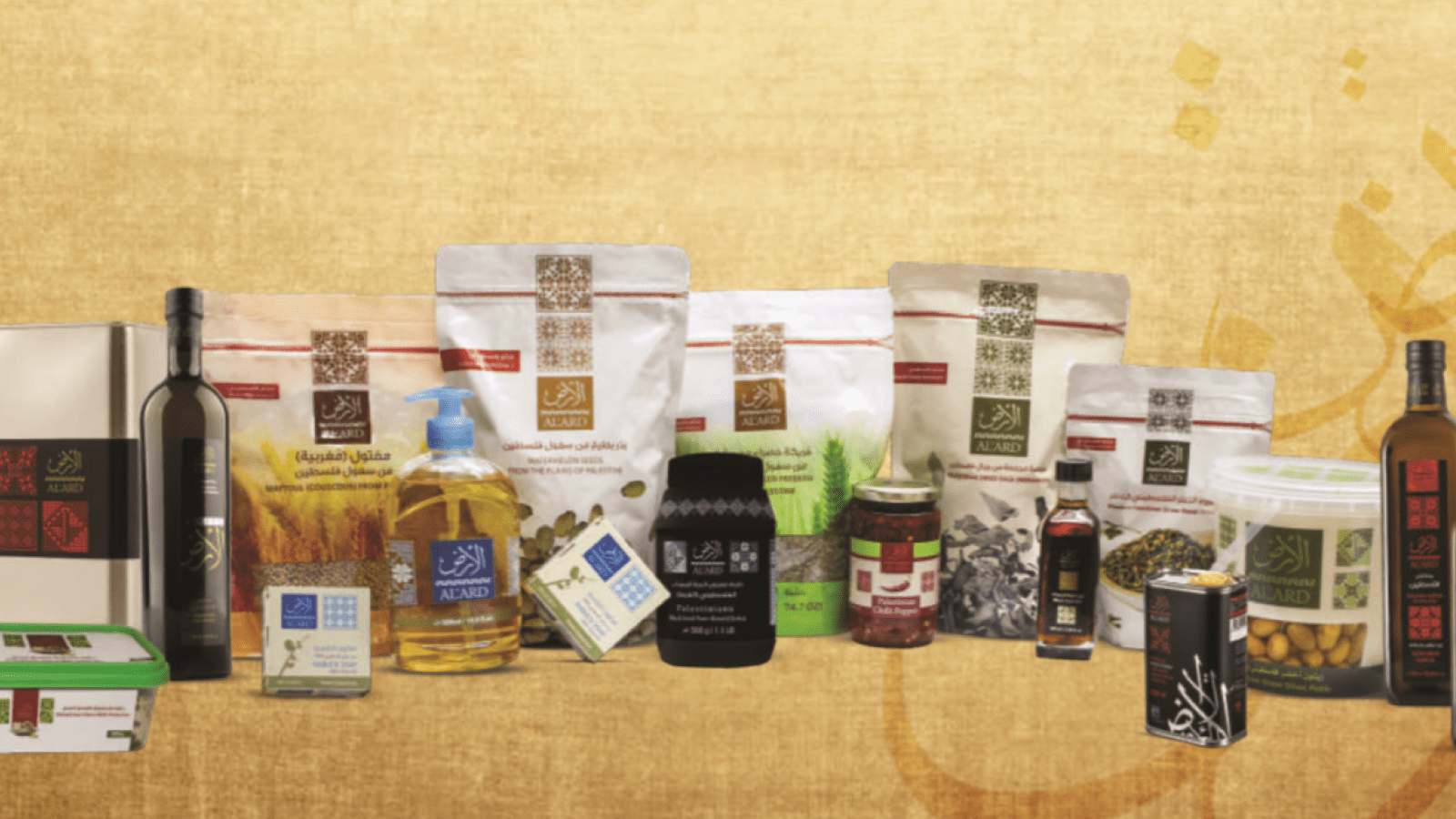 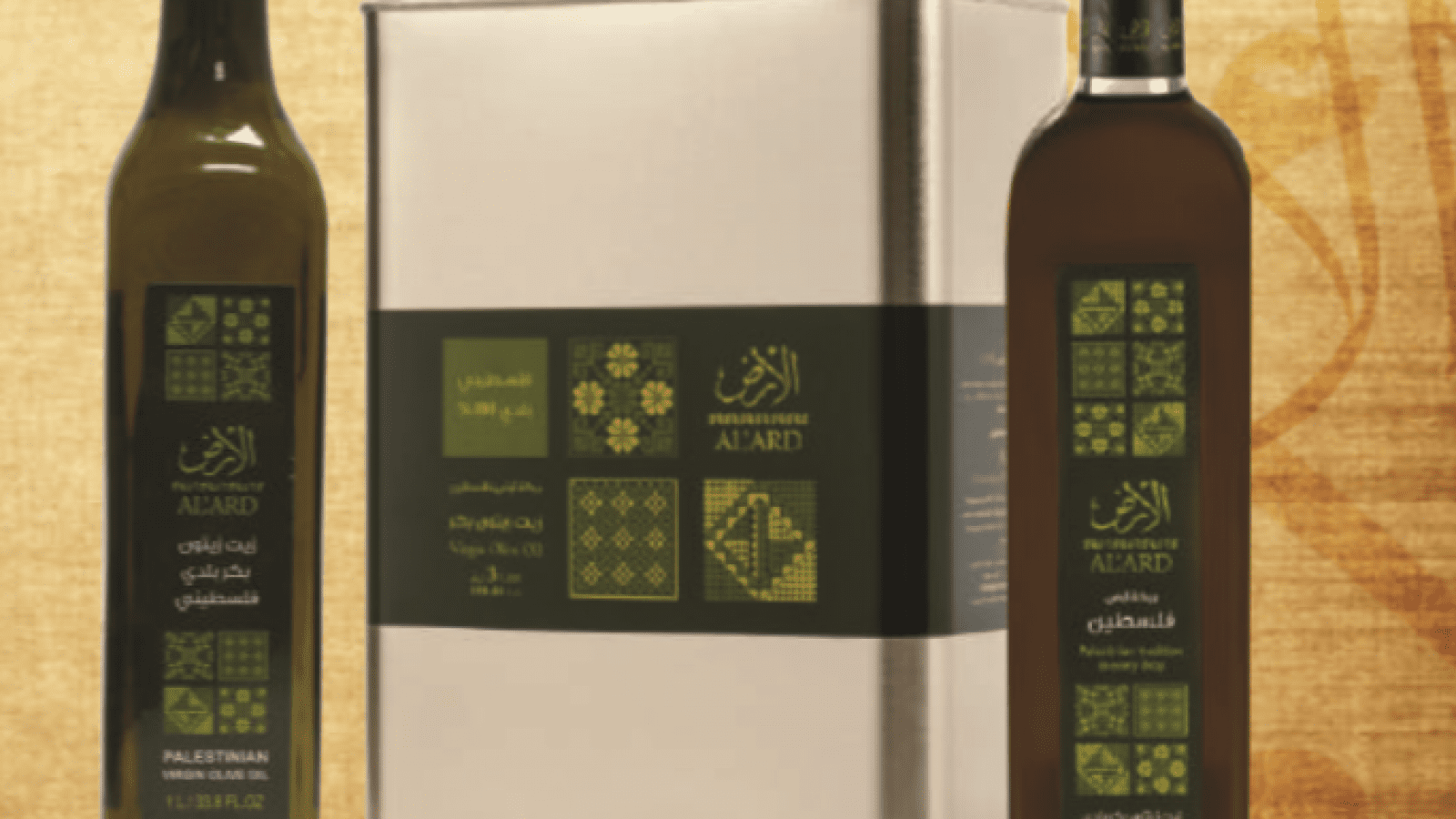 After Subhi completed his university studies, he returned to start the development of the company. Then began the process of preserving the family’s legacy and to expand it. According to Subhi, success was never a choice but a necessity. At the time he decided to implement modern methods to develop this field. He found that the world of organic products is the most highly sought after, and the need to preserve the environment and create a healthy lifestyle is also an urgent necessity at this stage.

Subhi continues: “It wasn’t easy to start with – I had the concept, but needed to find the best way to put it into practice. This is where I met Dr. Samer Jarrar, an agricultural development consultant, who was then appointed as a consultant to the company to allow us to benefit from his expertise. The idea was put to him, asking to what extent could it be applied to our olive oil crops to obtain the highest quality oil. This was in 2017. We have already put in place a plan in the form of an in-depth study concerning how to make the crops organic, in addition to the need for publicity, to raise awareness for farmers and to assist them, and developing machinery and methods.”

The plan included an international awareness and education tour that included visits to Britain, Italy and Germany. During this tour Subhi attended the most important conferences and lectures relating to organic agriculture. It took two years to familiarise himself with this sector. Although his university specialisation was money and finance, he was able to combine what he learned in organic agriculture with his knowledge of financial management of the project.

“So began a new phase for Al Ard project” confirms Subhi. “Al Ard symbolises many things for Palestinians: their existence, the olives that they obtain from the land, and the land that we all share as human beings. The label carries my ambitions to develop an integrated project that would achieve a circle of benefits starting with the simple farmer and ending not only with the consumer and with me as an exporting company, but also for the environment itself. This was the complete dream for me!”

The company’s consultant Samer Jarrar comments “I believed in Subhi because I found that he not only had ambition and knowledge, but also passion, and it is rare for these elements to come together. Subhi combines the modernity of the present with the legacy of the past. He is one of the third generation of this establishment and the best living example of the power to change and develop and to make use of all potential to achieve success.

Despite the fact that commercial business means profit first and foremost, I found that Subhi’s comprehensive idea to achieve a benefit for all is an idea suited to the potential and is not impossible, and this is what we all aspire to through this project.”

Samer continues: “The model we are building is a different development one based on higher values and partnership, and there is an excellent standard of transparency. It should also be mentioned that the state of lack of confidence and the tendency towards capitalism were the catalyst for the creation of this direction. When we talk about the Palestinian situation, we have to mention that the farmers who stood firm in their land deserve support. We are not talking about just an investment and financial system, but about a system of partnership and integrated community and cultural work. We have a commitment to the environment. This is the model that we are trying to create in order to maintain a healthy environment and to achieve profit for all at the same time.” 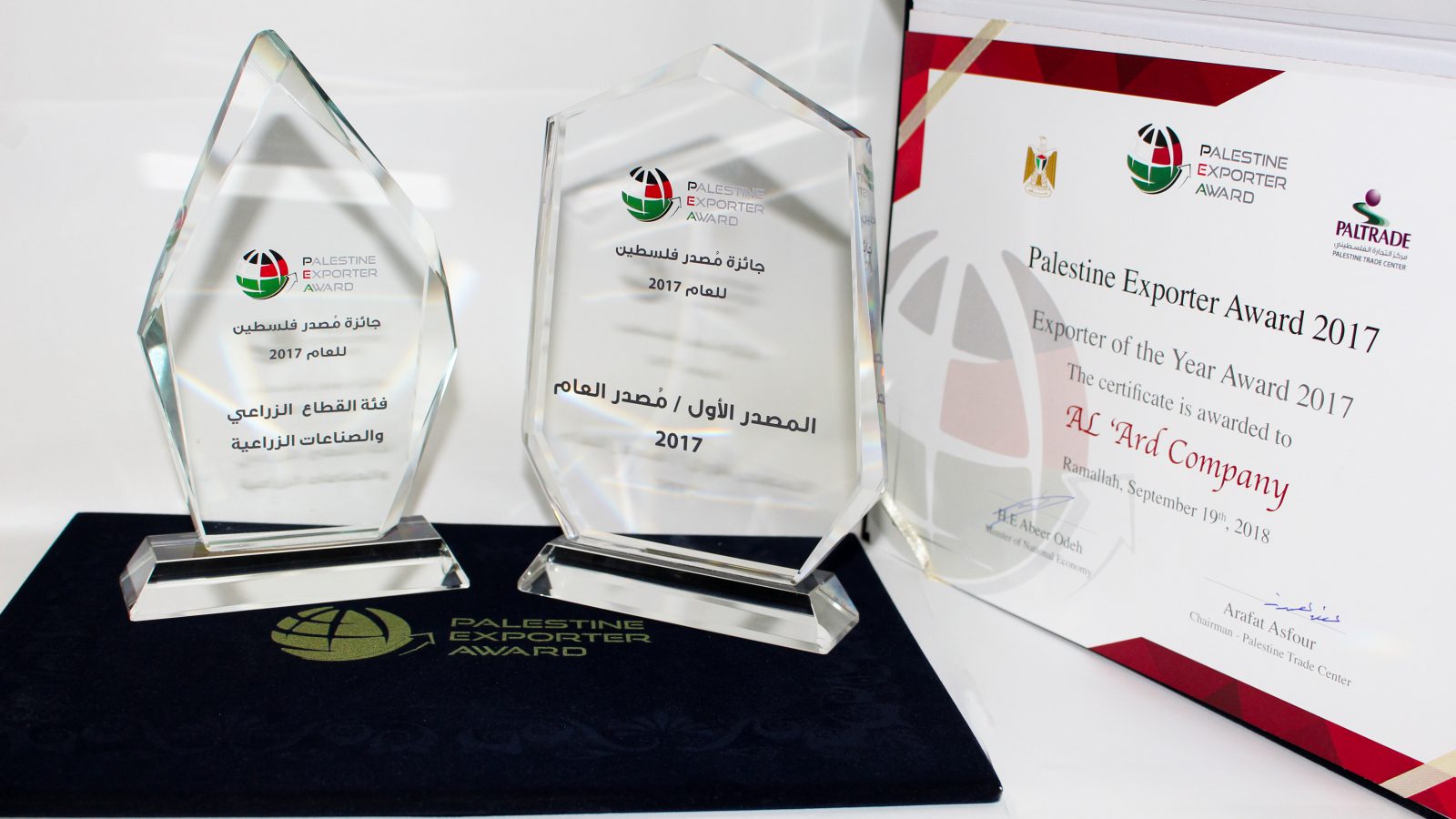 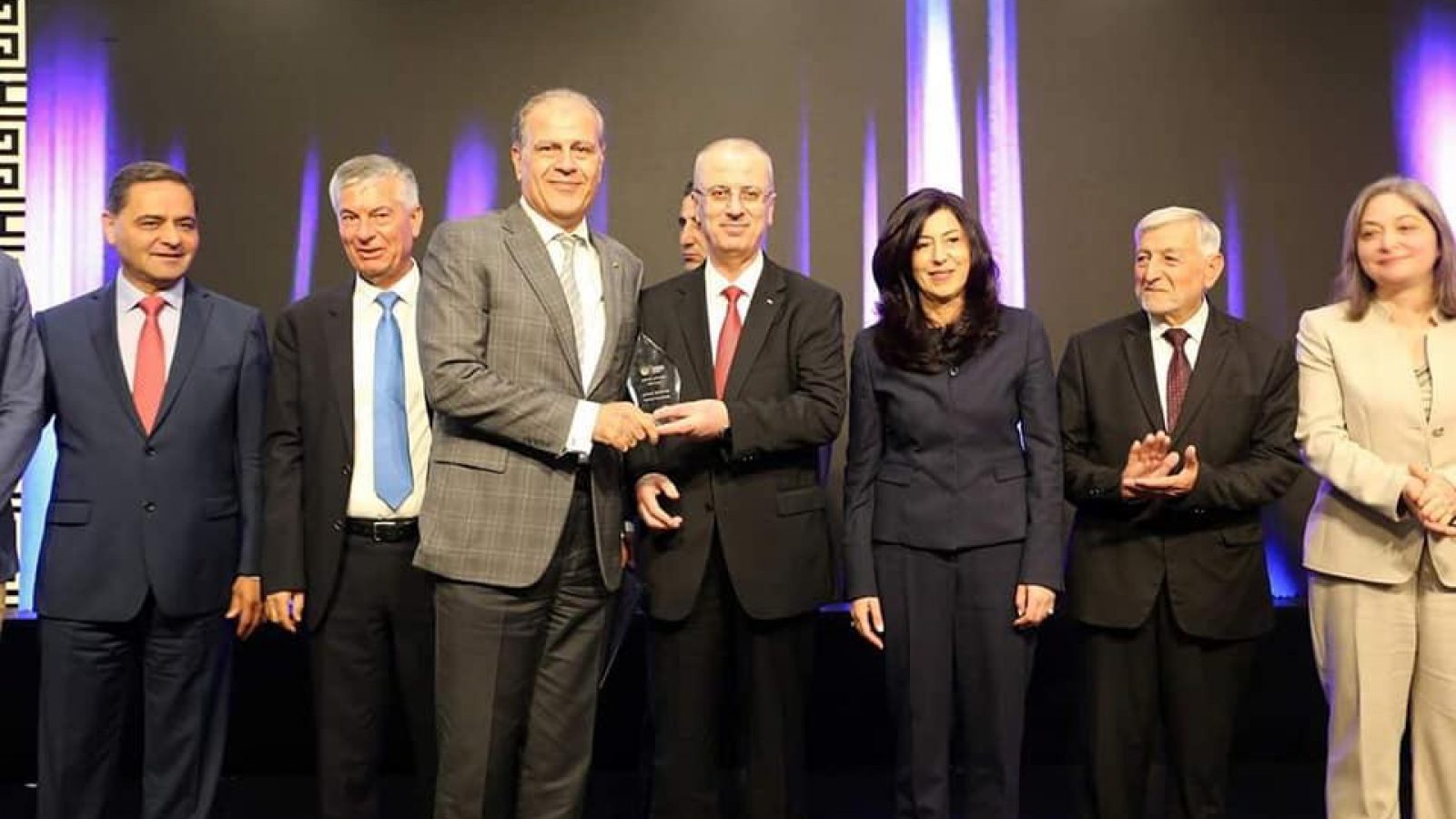 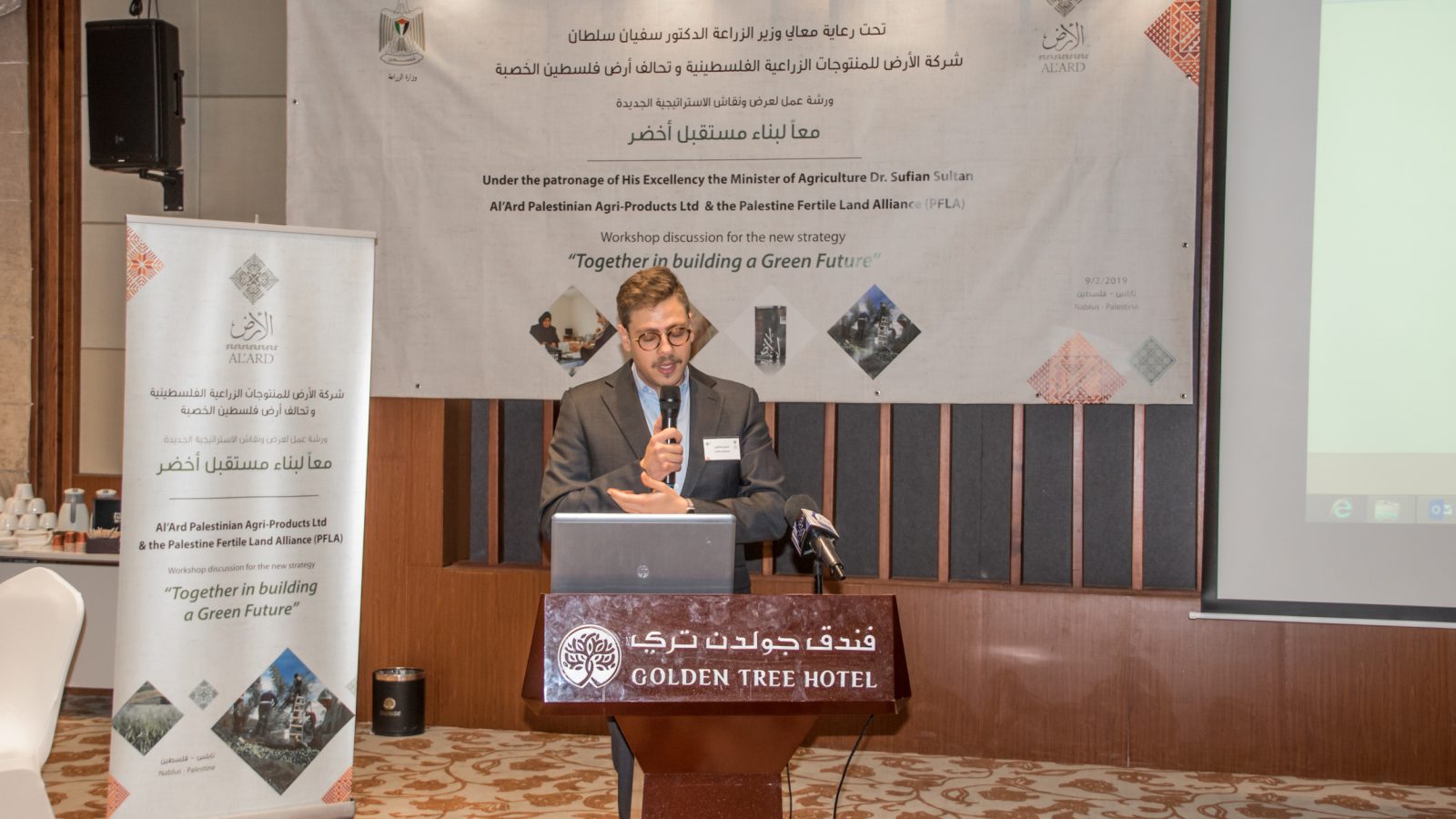 Subhi clarifies further: “When we started at the development stage of Al Ard project, our greatest concern was how to maintain the quantity and quality of a premium crop while dealing with a product that is affected by climate and nature where it is difficult to predict developments and results. It was therefore necessary to create awareness amongst ourselves as employees and investors, as well as amongst the farmers, both to achieve quality and consistency and to overcome risks. At the same time, my aim was to change from the model of traditional investment to a ‘green culture’ model, i.e. organic, as well as fair trade. There is a great deal of concern in Europe for this field, and the education and studies taking place there relating to this are astonishing, reaching limits that are unimaginable here in the Arab world. It is an integrated strategy combining ethics, alliances and the most important elements of sustainability. This is what we have actually achieved in our project at Al Ard Company. We have been able to unite farmers and to sum up their needs in terms of machinery, agricultural materials and facilities. We then went on to collect money through projects headed by the European Union, and we created a system of partnership and trust. Things got going when the EU offered assistance to our company through the project ‘Creating an environment to facilitate the green economy in Palestine’ in 2017. We then came together with our goals and the goals of the project to support the green economy sector which does not exhaust environmental resources, with the basic principle of departing from the methodology of capitalism and the system of personal interest and its implications for society, the environment and farmers.”

The project, supported by the European Union and implemented by Pal Trade, is part of several projects to support the Palestinian economy in line with the global trend of environmental friendliness. The project is keen to create a network with European companies and open up new markets for these organic products. It has also targeted three agricultural sectors – olive oil, dates and herbs – as the most popular on an international level. It has applied and fulfilled the conditions and the evaluation process in order to develop its business and to obtain an organic products certificate.  ‘Organic products’ does not just mean agriculture using healthy and environmentally friendly methods without using fertilisers and pesticides, but goes beyond this to principles of fair trade, energy saving and overall production health.

Worldwide, the organic culture is considered to be a new philosophy that adopts the principle that humans are the centre of interest and benefit with no harm to the environment or market monopolies. Thus, the European Union decided to support Al Ard Company and other companies to obtain organic licensing. It is worth mentioning that the process of obtaining the organic products licence required three years of supervision and follow-up. The EU also helped to spread Al Ard products through previous projects that it had carried out in awareness, advertising and networking with European partners, with the support at that time reaching 65 thousand Euros.

Subhi concludes: “I am ambitious that there should be partnership, social and economic impact and stability for Palestinian products in international markets. This will only happen by the creation of an integrated community system through an ethical business model leaving a positive influence and method to be emulated in the future. We hope to expand the scope of our work with new partners and associations, and today we are in the process of establishing a “fertile lands of Palestine” alliance that will achieve all of the noble goals.”