Young Lebanese Sandra Sleiman always dreamt of bridging culture and nature through the power of films. With the REEF (Rural Encounters on Environment and Film) initiative funded by the EU, she brings cultural life to rural regions of Lebanon through a four-day event filled with cinematographic and social activities centered on the environment. 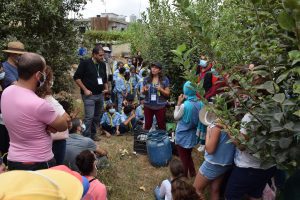 After pursuing her MA in Management and Conservation of Natural Resources in Beirut, Sandra Sleiman found herself under an unexpected spotlight, after she made a groundbreaking discovery in the field of wild mushrooms.

The young graduate discovered 16 new species of mushrooms in Lebanon, eight of which would be new to the world. “This brought so much hope to people. That a girl from a far, rural region –Akkar-, did something so great for Lebanon really stirred something amongst the scientific community. But for me, it also meant that I had to go back to my roots and put my expertise to use for my community and my people,” Sandra recalls.

She decided to move back to Akkar, located in the far north of Lebanon, and start something completely new: the decentralisation of culture. 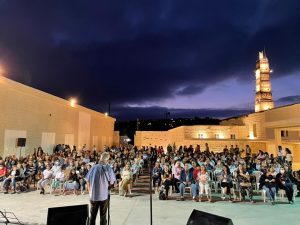 A return to the roots: the REEF project

In her native town, Sandra joined up with a local NGO -Council of Environment- where she worked on the launch of the Rural Encounters on Environment and Film – REEF. Meaning ‘rural life’ in Arabic, REEF is a one-of-a-kind project that is “very new to the Arab world”, Sandra explains, pointing out that it is quite unusual to see multi-disciplinary cinema festivals dedicated to both rural life and the environment .

The NGO started REEF with the idea of bringing cinema to the underserved communities of Akkar and Hermel, while moving their narratives to the forefront of the national debates on the environment, decentralisation and social cohesion.

Instead of simply screening movies, they decided to do it through pathways that are more creative. “We are really like a family, we welcome everyone, whatever their age or passion. For this, we have a very diverse programme of movie screenings, short film production competitions, debates and discussions, animation workshops… even hikes!”

When asked to sum up REEF in one word, Sandra hesitates, concluding: “we are basically an eco-friendly, cine-lovers, actors, kids, local producers and local craftsmen community! The whole point is to show the beauty of the nature of Akkar and its archaeological side.” 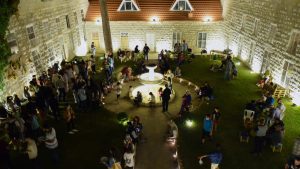 As part of the EU-funded programme Cultural Alliances, Sandra’s NGO, Council of Environment, teamed up with Beirut DC and the cultural association of Hermel, Al Montada, in order to organise the initiative, and best cater it to the local needs and resources.

Started in January 2021, Culture Alliances is a two year regional project that aims to foster cultural entities’ investment in sustainable collaboration to enhance the cultural ecosystem and to facilitate and increase access to culture. It seeks to support young people like Sandra in “imagining and piloting new, inclusive, and collaborative pathways to audiences and new bridges between social, cultural and environmental movements”.

“By getting together under this alliance, we have been learning how to be better equipped to organise such an event, and now even expanding it!,” says Sandra with excitement. She partook in a number of training, workshops and mentoring sessions, which helped turn her myriad of ideas into strategically planned projects.

The trio of entities is now working on the expansion of REEF to other localities, including Hermel and Kobayat. “In 2023, we will be organising another festival in Hermel, which is also a region largely underserved in terms of culture.”

For Sandra, no idea can ever be a waste of time. “Whatever you invest in your community, you will harvest back. It is guaranteed! When people are united, thoughts and ideas are put together, big projects can come to life and create a real change in any place you may be,” the young woman concludes.

Cultural Alliances is one of ACC’s five components, implemented by the regional non-profit organisation Culture Resource. Started in January 2021, Cultural Alliances aims to strengthen the cultural ecosystem of the Arab region and to facilitate and increase access to culture within their contexts.

The project does so by supporting up to 12 cultural alliances consisting of 36 cultural entities seeking to strengthen their adaptive capacities and to engage in collaborative alliances as well as wider partnerships on the local, national and regional levels.