A four-day social entrepreneurship boot camp was recently held in Marrakesh. Attended by young participants from Tunisia, Algeria and Morocco and taught by international experts, the boot camp was the third of its kind, with two other camps having previously taken place in Tunisia and Algeria. Organised under the SEED Euro-Med programme, an exchange programme funded by the European Union, the camp was designed to support social entrepreneurs through mutual learning and intercultural dialogue.

A number of those taking part in the Marrakesh boot camp, which was run in collaboration with the project’s Moroccan partner, Jeunes Leaders Marocains, were new to social entrepreneurship. Others had already developed their business idea. What they all had in common was a desire to really deepen their knowledge and expertise in the field of social entrepreneurship. 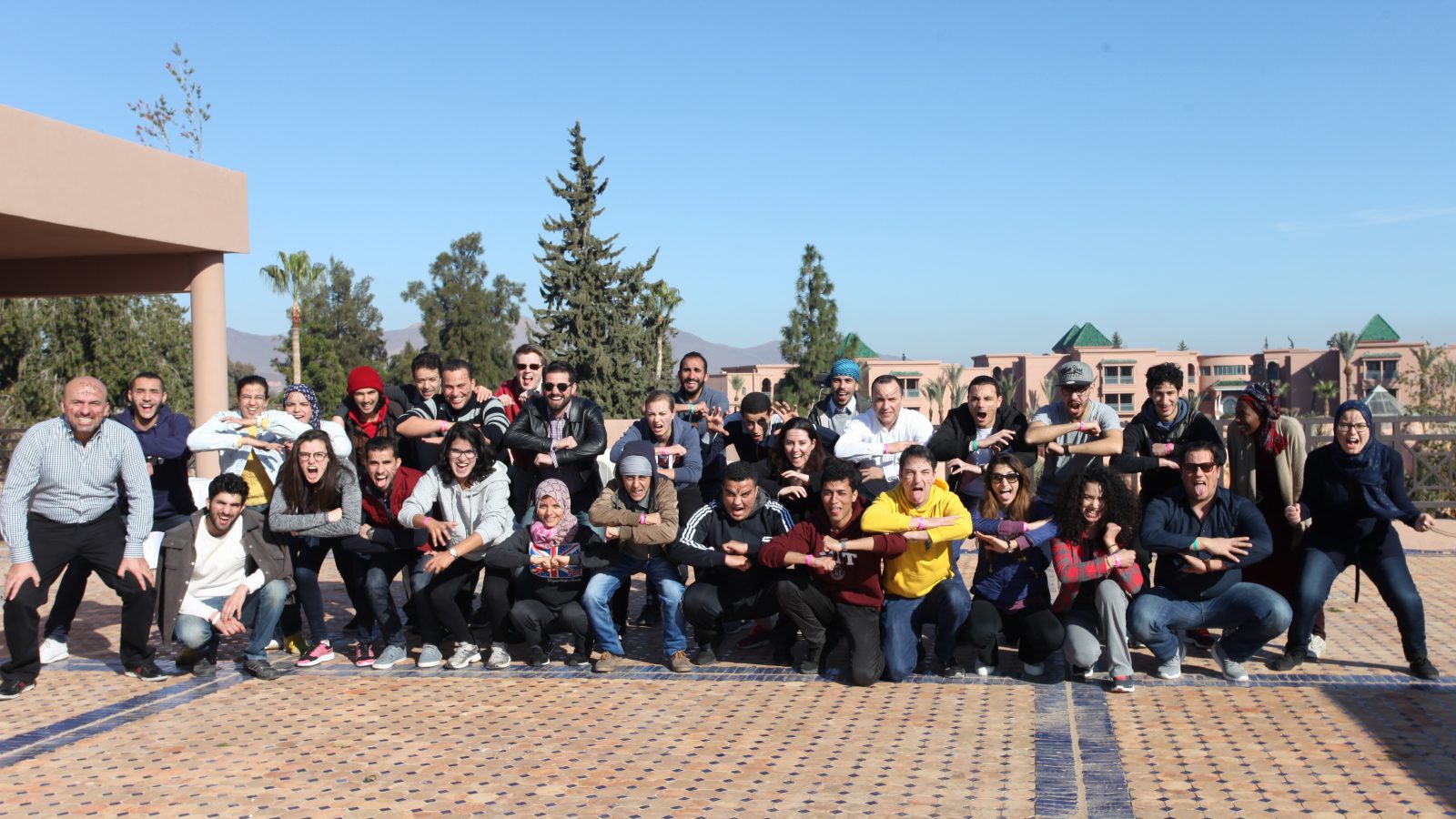 Over the course of four days, the 25 Moroccans, 15 Tunisians, and 15 Algerians were joined by 3 experienced European social entrepreneurs, who helped them put into practice ten steps for creating and managing a social enterprise. This involved initially identifying a societal problem, defining it and then implementing a sustainable solution in the form of a social enterprise that was to be presented to a jury on the final day.

On the first day, the participants, organised into groups of 3-4, worked on their chosen societal issue in steps: defining the problem, understanding its causes and effects, analysing the advantages and characteristics of existing solutions, and putting forward an alternative. By the fourth day, the teams had to be ready to present their ideas.

The activity launch gave rise to intense discussions between the participants and experts present. During one of these discussions, participants were able to exchange ideas with Vera Borsboom, programme director at the Euclid Network and the leader of the project. She said: “The most important thing when it comes to social enterprise is not profit, but the fact that you are taking part in treating a societal problem. However, in order to achieve this, and in order to guarantee longevity, a social enterprise must also be economically viable, and therefore must know how to create profit.” And to explain this further, Vera added: “We must maximise the social aspect in keeping with the commercial aspect.”

The participants didn’t experience much difficulty finding societal problems in need of a solution. The abundance of ideas and passionate exchanges served to demonstrate their ambition and desire to bring about lasting solutions to the problems.

Younes, a young civil engineer, hopes to create his own social enterprise in Morocco that will contribute towards eliminating shanty towns. He already has experience within a social purpose association, but wanted to learn the fundamentals of starting a business before he throws himself into achieving his ambition.

“My story began while I was a student at engineering school in Casablanca, when I came up with a concept to address unsanitary living conditions,” Younes said. “A friend and I tried hard to make our concept of using 90% clay and 10% cement for building a reality. Our attempts failed, but, after a huge effort, we were able to build two constructions. We are now looking to create our company.”

“The Marrakesh boot camp has helped me to truly understand the process of creating a social enterprise,” Younes concluded at the end of the four days, during which he threw himself into the business creation exercise.

Najib, a Tunisian participant, doesn’t have a business in the legal sense of the term, but his own personal experience led him to attend the boot camp in order to learn how to build and successfully manage his future social enterprise. Currently, Najib works in collaboration with five women in a group called ‘Tilli Tanit’ (which means ‘the shadow of the queen’ in the Amazigh language), which produces traditional clothing finished with silk or silver wire embroidery.

With a lot of passion and emotion, Najib looked back to the journey that led him to create the ‘Tilli Tanit’ group: “From working at sea, my father joined the agricultural industry in the El Mehdia region on the coast of Tunisia. He wanted me to follow in his footsteps. However, ever since my childhood I’d always been fascinated by my mother’s artwork and embroidery,” Najib said. And this did not quite reach his father’s expectations. After passing his baccalaureate, he studied for three years at a textile institute.

“After that, the 2011 revolution broke out and the doors were opened wide,” Najib explained with pride. Najib took himself to the capital, seeing the social movement up close. After that, he returned to El Mehdia, where he met the five embroiderers.

“After four days at the boot camp, I now have a clear vision of the process I need to follow in order to build and manage my social enterprise with my five partners,” Najib said with satisfaction.

“This kind of project helps to support security and stability within the Maghreb region. Social enterprises are an effective way to integrate women in difficult situations, people with disabilities, the elderly, and children… “, observed Kamal, the coordinator of the programme in Algeria, who has gained considerable experience working alongside social entrepreneurs.

Kamal continued: “The Marrakesh boot camp has enabled us to consolidate what we have done in the past three years in terms of training and supporting new social entrepreneurs.”

At the end of the boot camp, participants presented their projects in front of the experts. They left feeling much more aware of the difficulties they would be facing, but fully equipped with what they needed in order to embark on their adventure.

Alongside the training and learning to use the new tools which would open the doors to social entrepreneurship, participants also had the chance to meet their counterparts from neighbouring countries, sharing their knowledge and experience with other youngsters who had the same goals and faced similar challenges.

Collaboration and exchange are fundamental aspects of entrepreneurship. The experience of sharing and communication made possible through these camps served to enrich these young people, encouraging them to create a network of social entrepreneurs that goes beyond the borders of their own country, and guiding them towards a more open approach.

In addition to these intensive events, the SEED EuroMed project, run by five NGOs located in London, Paris, Algiers, Tunis and Rabat, also offers exchange opportunities between social entrepreneurs in North Africa and Europe. A total of 30 exchanges will take place throughout the course of the project, with 2 entrepreneurs benefiting from each exchange. During their stay, the entrepreneurs will be compensated a monthly sum of between 850 and 1,100 euros, with airline travel expenses also covered.

These one- to three-month trips not only offer entrepreneurs the opportunity to gain international experience and knowledge of the European market, but also grants European companies access to an international network.