“On your bike!”: Egyptian women cycle on the winds of change

Using their daily commute to defy societal norms and express their right to freedom, a group of Egyptian women has triggered the wheel of change in their communities, as part of the nationwide online campaign “Better by Bike”. Launched by the “Tabdeel” initiative (which means both “Pedaling” and “Change” in Arabic), the campaign has brought together like-minded women seeking to challenge the preconceptions about women biking and promote their love for urban cycling.

A broad smile on her face, Yosra Abdelbaki pedals around Cairo not bothered by the world, strolling past lines of cars stuck in the daily traffic of the Egyptian capital. The 28-year-old woman enjoys her well-deserved exercise break, as she cycles back home on her daily commute from the British cultural centre. “Before, I had to use public transport, which was always crowded and time consuming,” Yosra remembers, noting that, with her bike, not only does she avoid road congestion and lack of personal space, but she also “gains a sense of independence and responsibility”. The young woman hopped back on the bike a few years ago, in spite of the warnings of her friends and family. “They told me it would be unsafe and I would be harassed, while my mum saw it as childish, telling me ‘You’re not a child anymore, what will people think!’.” 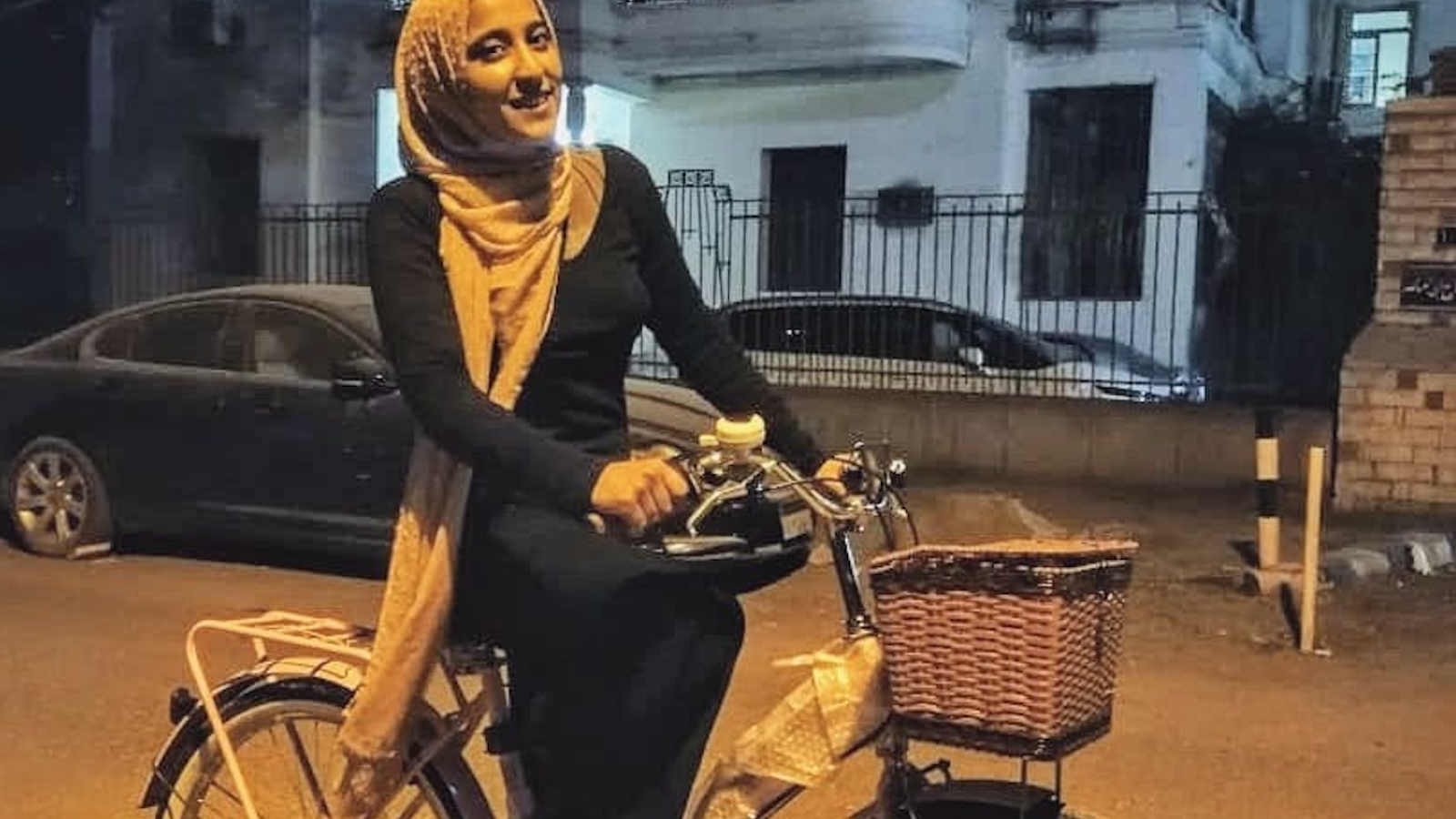 Yosra remained determined to challenge these social conventions, convinced that society would get used to seeing girls riding bikes around town. “Society is always resistant to new phenomena but change is inevitable,” Yosra asserts. “And I was right!” The young woman happily recounts the many words of encouragement she has been hearing daily from passers-by, colleagues and … even her mum! “They were not only encouraging me, they also became interested, telling me that more people should start using their bikes.”

Yosra does not deny that she faced a few discouraging comments in the beginning and knows that she will continue to do so, but she says the positive comments and ‘Bravos’ she hears along the way will always outweigh the negative remarks. “I want everyone to know they can make their own choices,” the determined young woman writes on the Tabdeel Facebook page, encouraging her fellow citizens to break through the wall of fear and hesitation. Meanwhile, she calls on companies, schools and institutions to promote cycling and purchase community bikes for big cities like Cairo.

Standing up to the challenge

Fatima Mustapha, 21, also decided to “make her own choice” by hopping on a bike a few months ago, after the Corona virus lockdown gave her the free time she needed to revisit her childhood love for cycling. “My mum was strongly against it, out of fear that I would get harassed. But that never got to me because I used to be verbally assaulted even when I was on foot!” the business student half-jokingly explains. Inspired by her early memories, Fatima purchased a bike online, and started using it for her daily ride to work at a health food shop in Port Said. “It is true that I received derogatory comments from pedestrians, motorbikes and car users. It was also difficult to get used to the bad streets, which do not have dedicated bike lanes. But that did not get to me.”

Just like Fatima, Hajer Said also stood up against the pressure of her entourage and people from her neighbourhood, the Bakos quarter of Alexandria. “People used to say ‘is it a boy or a girl?’ and other stupid comments,” the 22-year old recounts, noting that, in this poorer working class area, she was even more exposed to offensive comments and harassment. “Four years ago, it was even more unusual to see a girl ride a bike around Alexandria and I remember being the only female student riding to the campus. I even had a special approval from the dean of the faculty.” Hajer says she has seen a gradual change over the years, not only from passers-by whose words have become “more and more encouraging” but also from fellow students and friends, who bombarded her with questions on how to learn to cycle and where to purchase a bike. “I am happy to see things changing, at university and in the streets. This year, for instance, the university cycle tournament had a much bigger number of female competitors and the weekly marathon in Alexandria has a lot more women running and cycling.”

Hajer agrees that challenges remain, in particular with regards to the poor condition of roads, which constantly endangers cyclists and leaves them prey to careless motorists “who don’t seem to see us”. Although Alexandria was among the first Egyptian governorates to create bike lanes, it remains largely insufficient and should be extended to more areas, according to her. By sharing their stories through Tabdeel, Fatima and Hajer both hope that they can help fight the preconceptions about women cycling and push authorities to “finally pay attention to the unsurfaced and unsafe roads”, ultimately promoting a wider use of bicycles.

Launched as a simple online blog in 2017, Tabdeel has grown to become a full-fledged community of bike enthusiasts across the North African region. The blog calls for “cleaner, healthier and human centered cities”, through a number of initiatives similar to “Better by Bike”. “It all started with a shared desire to lobby for improvements of roads and new bike lanes in Egypt, and to promote cycling as a means of transport,” recalls Tabdeel’s founder Hiba Attia Moussa, citing the group’s frustration towards local authorities. “We have members working in urban planning and urban design, so we were able to submit proposals for road layouts that take into account the needs of cyclists in several provinces. We also created a new plan for the waterfront promenade in Alexandria, which was submitted to the prime minister and accepted by the Alexandria province.” Despite successfully obtaining a French grant for the creation of a bike path, the project stalled due to the dismissal of the governor. Although Hiba does not hide her frustration, she remains hopeful that the citizen-led initiative will be beneficial. “I can already see that through the ‘Better by Bike’ campaign: the idea came about by chance yet it became viral in a very short time. The Facebook page became flooded with questions from girls who wanted to know where they could learn to ride and buy a bike,” Hiba rejoices.

In addition to sharing the testimonies of 20 women like Yosra, Fatima and Hajer, the campaign also provides financial support to buy and rent bikes, through a symbolic 500 Egyptian pounds (27 euros) subsidy granted to almost 40 people. “We know that buying a bike is not always possible, so we encourage people to rent bikes for 10 to 15 days, and we direct them towards their nearest bike hire businesses,” Hiba explains. For those who already own a bike, Tabdeel also provides bicycle maintenance grants worth 300 Egyptian pounds (16 euros), which “ran out in days!” remembers Hiba, leaving no doubt as to the popularity of this campaign. 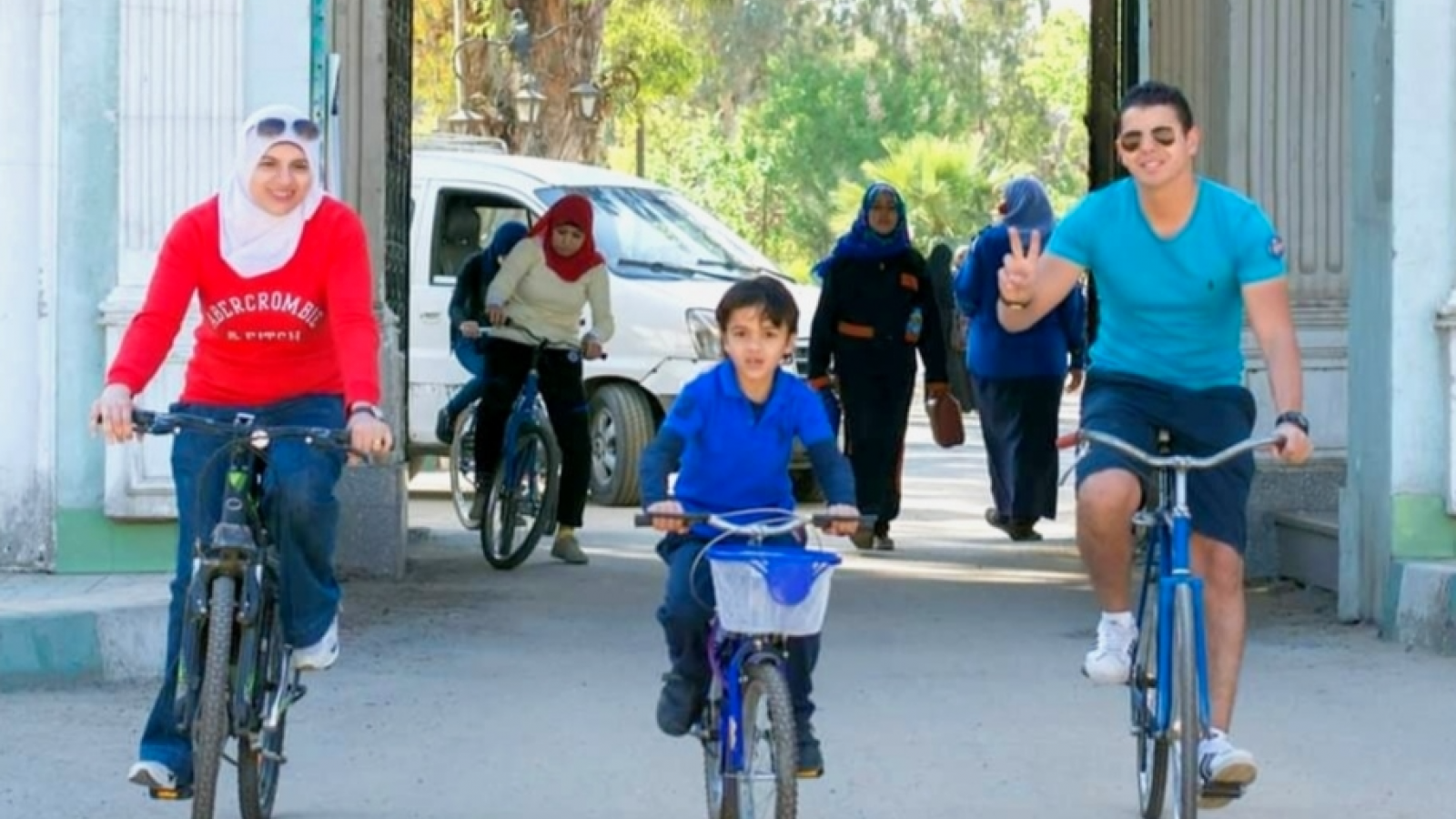 Biking for a better future

Of all the photos featured in the “Better by Bike” campaign, the one that gathered the most comments was that of a mother and her teenage son cycling together. Rihem Salah (aged 37) and Adham (12) took up the habit five years ago, and have since become fervent cyclists in the weekly rides organised by a group of cycling enthusiasts every Friday. “I started riding in this club with my brother as a way of reliving our childhood memories when we used to go to Cycle Club together,” Rihem recalls, fondly, adding that she enjoyed the ride so much that she has barely missed a single one ever since! “I know that it can be difficult for women cyclists, especially in crowded areas of Cairo, like the Al-Hussein quarter and avenue Al-Muiz Li-Din Allah, where I myself noticed nasty comments and stares. But these won’t stop me from enjoying my passion.”

With the support of her husband who looks after their two children when she is on her bike rides, Rihem aims to encourage others to follow her lead, mostly by posting pictures on her Facebook page, “which always receive positive comments”. She wants girls to know that it is safe for them to join cycling groups “as organisers make sure to position young men at the front and back of the peloton to protect women”. The young mother also wants to pass on her passion to her children, and use it to educate them about social acceptance and healthy living. “Adham has been joining me on our weekly bike rides and he started cycling to school every day. I know he is proud of me for pursuing my passion and being more than just a mother and a wife.” Rihem says she decided to post on the Tabdeel campaign page “to raise awareness of the sport and show that wives and mothers also have the right to enjoy this sport.” She hopes that the campaign will help improve the conditions for cyclists in Egypt, and, why not, maybe see wide bike lanes like the ones in European cities.   The mother of two also hopes that Tabdeel will encourage the government to impose tougher penalties for verbal harassment “to deter anyone thinking of heckling female cyclists”. “The bike culture is healthy in so many ways and should be encouraged. I cannot wait to see it spread further in Egypt”. 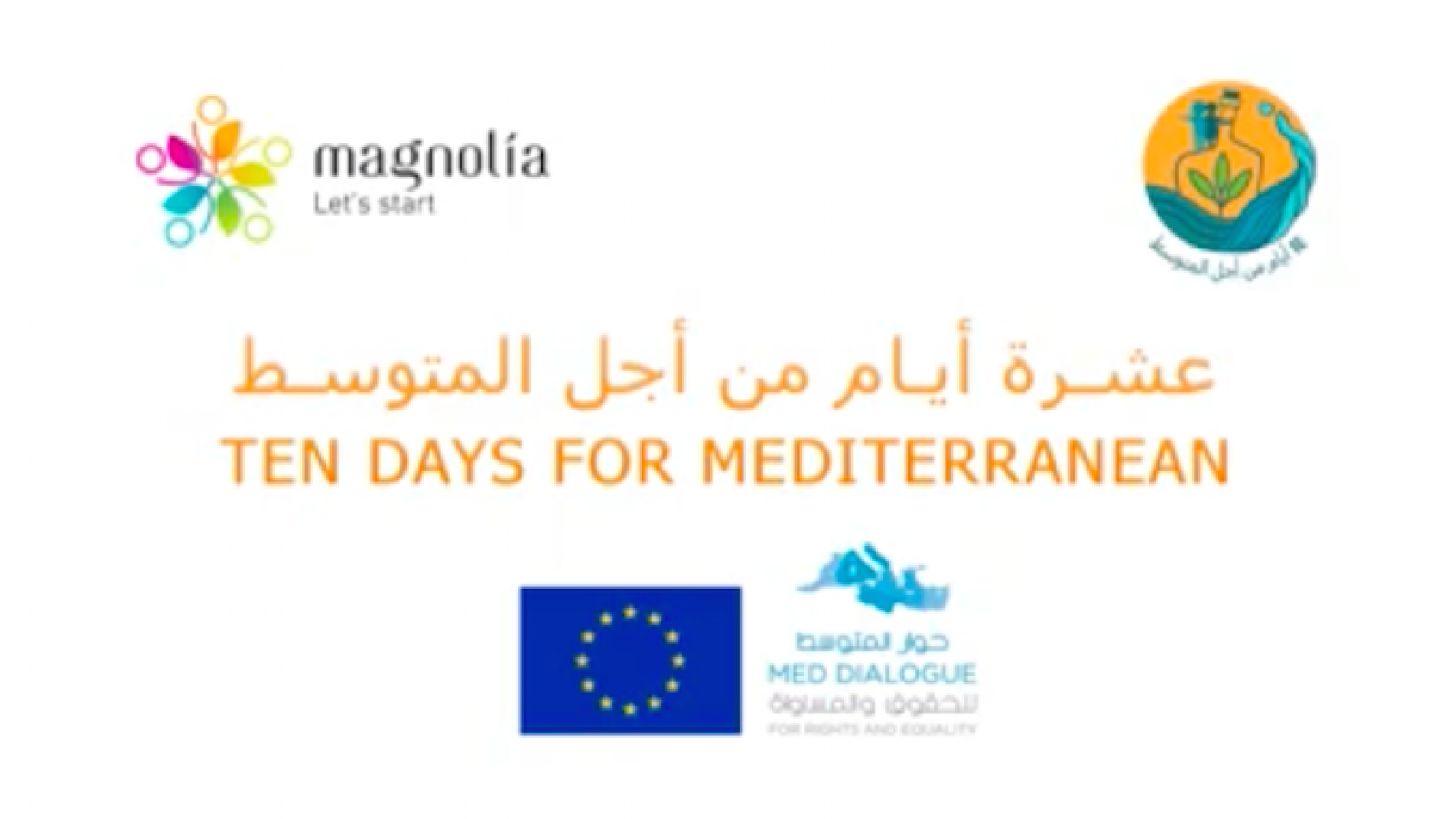 10 days for the Mediterranean

The idea for the “Better by bike” campaign was developed during a youth training workshop held in Tunis in January by Med Dialogue for Rights and Equality, a three-year regional technical assistance programme funded by the European Union. Gathering environmental activists from 10 Southern Mediterranean countries, the event focused on the environmental challenges across the Southern Mediterranean, seeking to develop solutions to pressing environmental issues. Through a series of talks and workshops, the event aimed to pave the way for the “10 days for the Mediterranean” campaign, which kicked off in June 2020 with a number of environmental projects running simultaneously in several countries.

Tabdeel and the ‘Better by Bike’ idea to reduce air pollution by promoting clean modes of transport like cycling was hailed by Souhir Mohieddine, communication manager of Med Dialogue for Rights and Equality, a programme aimed at strengthening the overall capacities and accountability of civil society organisations in the Euro-Mediterranean region as well as facilitating their involvement to boost their contribution to the political and institutional framework at the regional level. “It is great to see such initiatives trying to change society’s views on cycling, as well as reducing pollution. ‘Better by Bike’ has done a lot for the Egyptian society, by highlighting women who, through the simple act of riding a bike, assume a role as social leaders,” Souhir stated, noting that the project was particularly selected for its focus on gender equality and collaboration with civil society organisations. The campaign also went hand in hand with the social distancing measures recently imposed by the various governments to control the spread of the coronavirus, encouraging employees to cycle to work and avoid crowded public transport.