Science is for Nerds! Not Anymore

The European Union has partnered with Al-Nayzak Organisation for Supportive Education and Scientific Innovation to introduce innovative, interactive and participatory approaches to teaching science in Palestinian schools. The results have been astounding.

Science is the core of our daily lives. We live science from the moment we wake up until the moment we go to sleep. Yet most children struggle with understanding science. 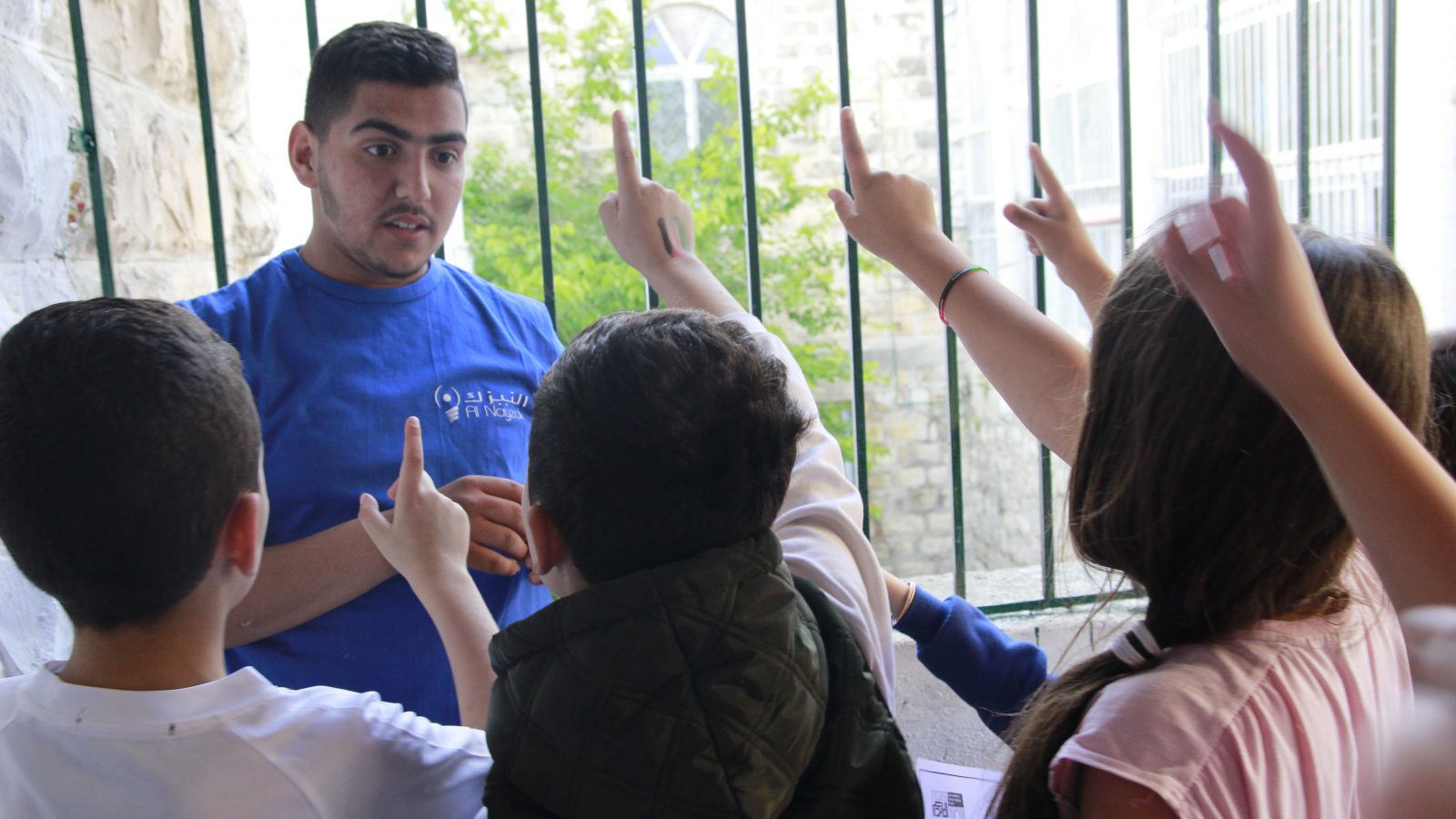 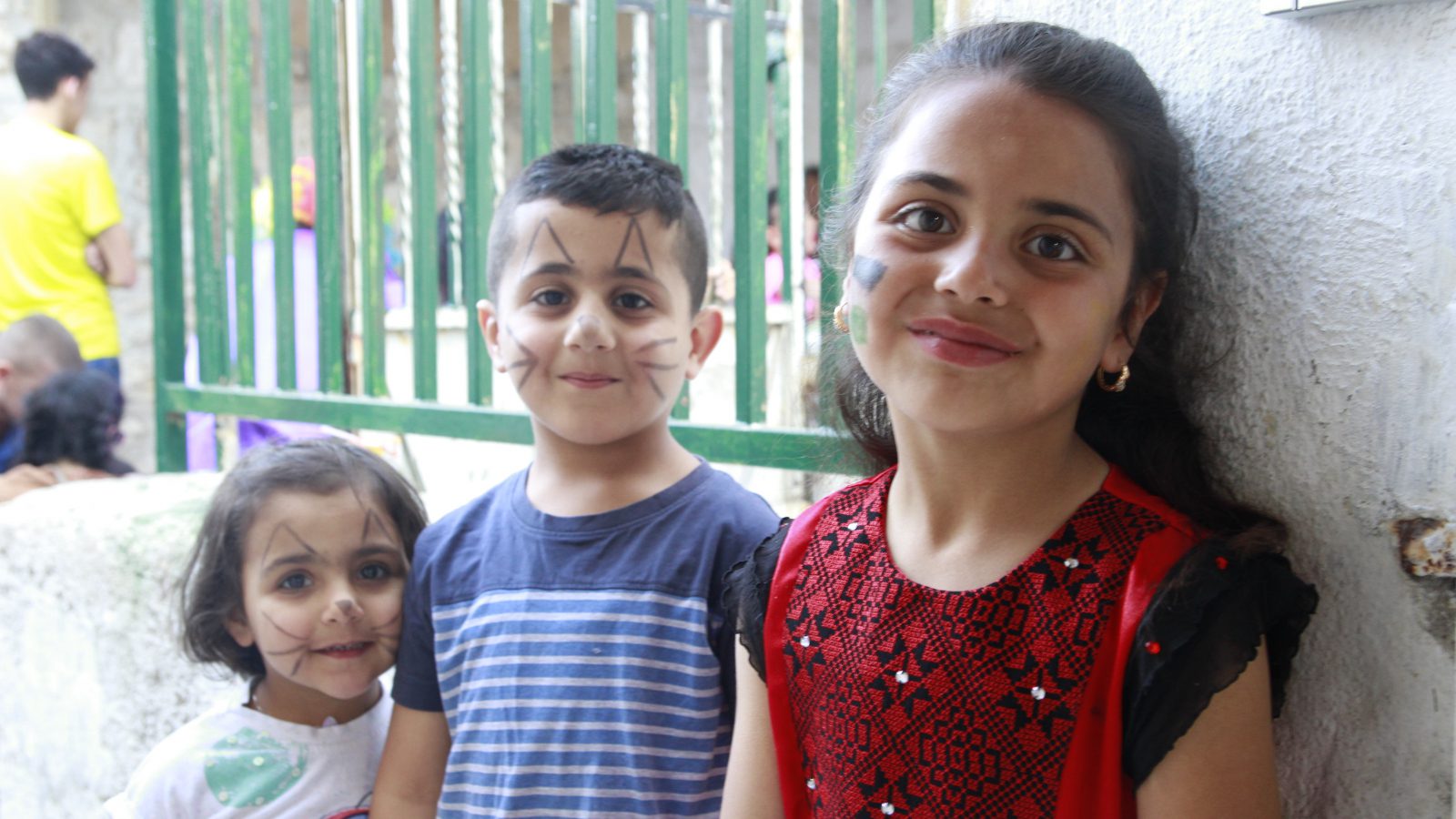 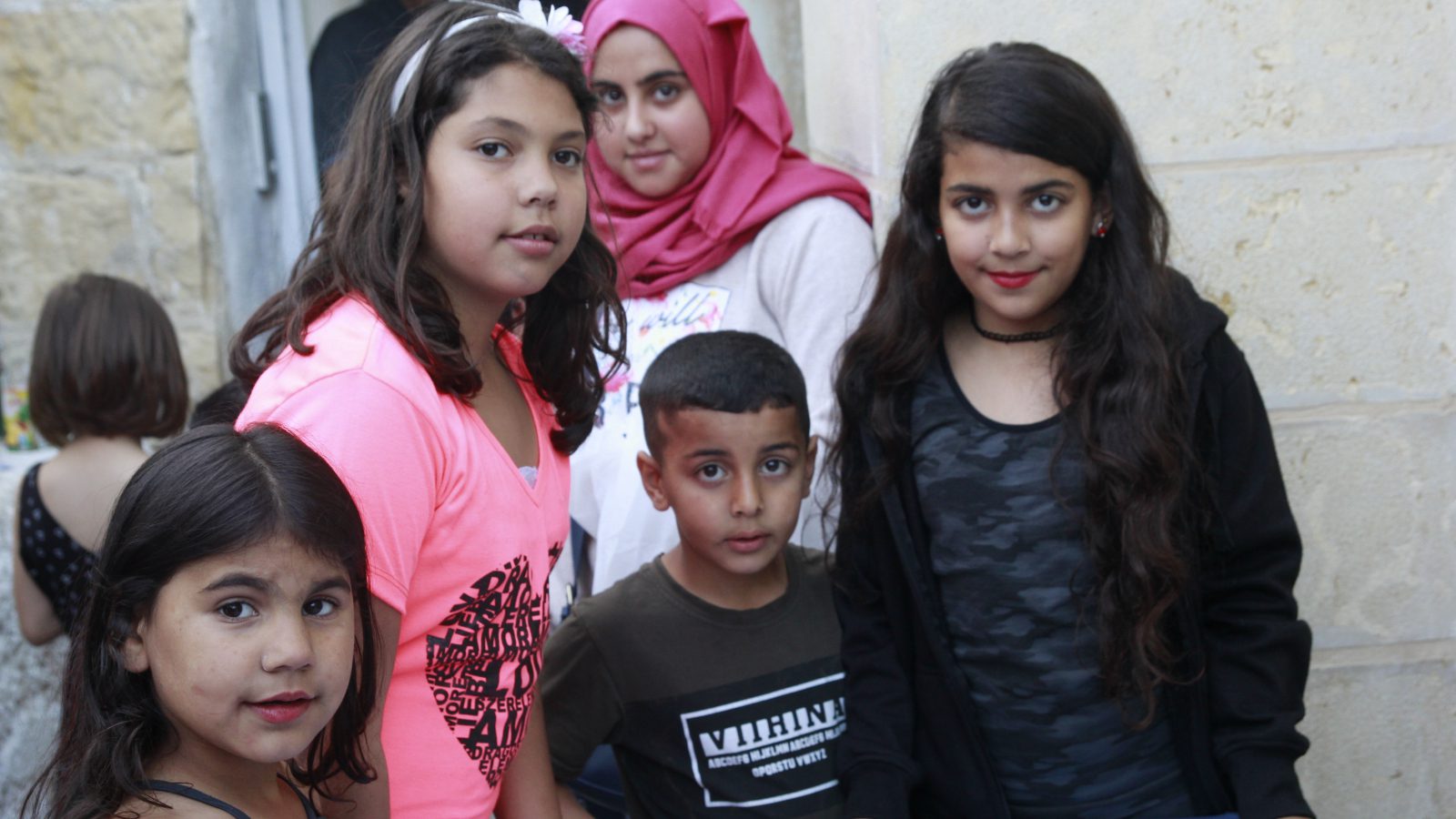 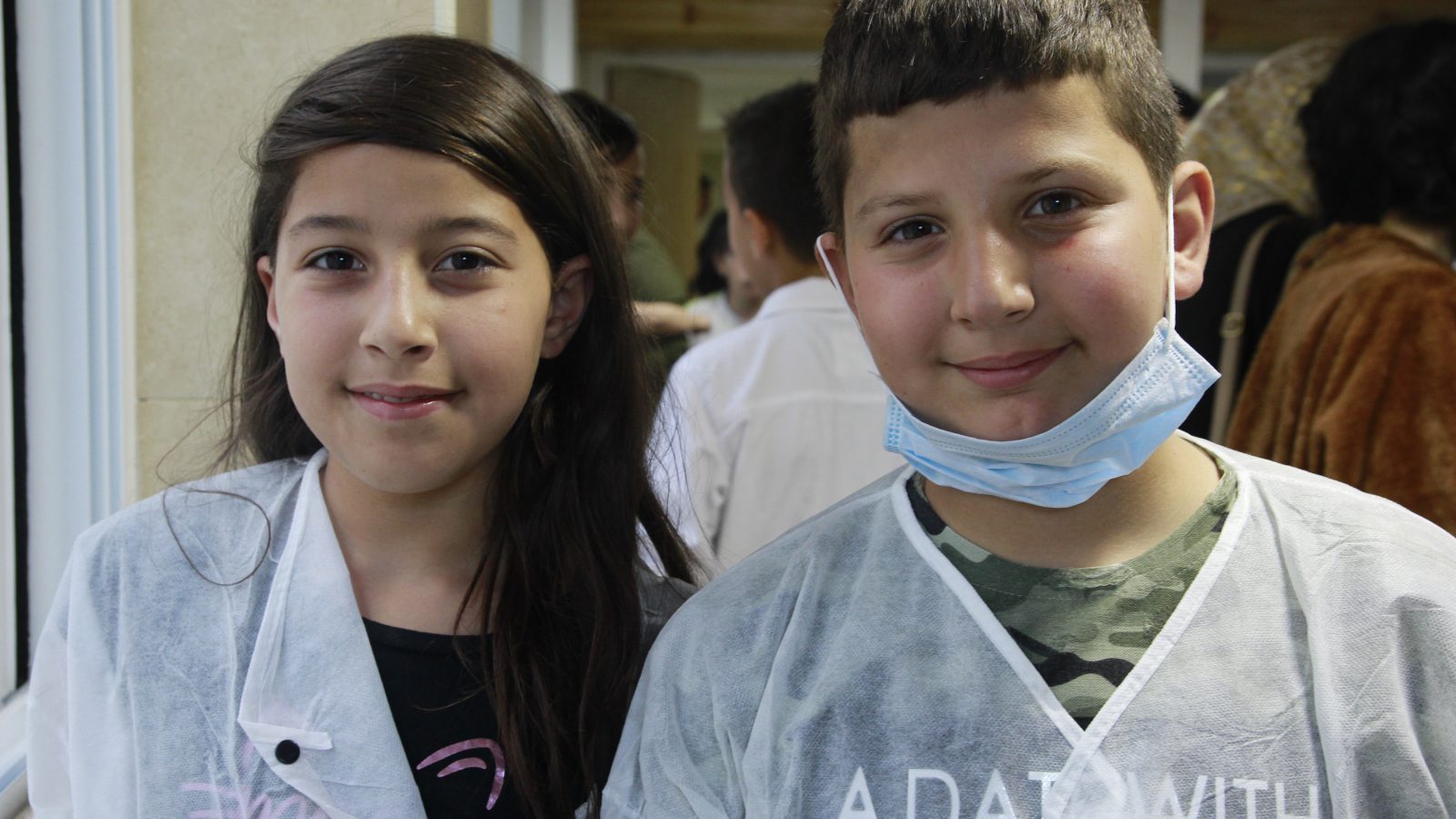 Mohammad Mtour, 15 years old, from Shu’fat neighbourhood north of East Jerusalem in the Occupied Palestinian Territories, was no exception. “I used to hate science because it was difficult for me to understand. Science class was boring. I just memorised what teachers wrote on the blackboard without understanding anything,” he said. Mtour’s sentiments are shared by most of his classmates.
“One reason children find science difficult to understand is that it is not taught as part of their lives,” explains Sarah Kuheil, Executive Director of Al-Nayzak Organisation for Supportive Education and Scientific Innovation, whose mission is to promote a culture of science and technology in Palestine.
“In order to make it easier for children to understand science and have the motivation to learn about it, it must be linked to their daily lives.  And in order to do so, innovative methods must be used; ones that are entertaining, participatory and interactive.” she said.
“We need to provide interactive educational methods that transform children from mere recipients of knowledge to partners in gaining knowledge by utilising methods that make science practical and relevant to their daily lives,” she added.
In doing so, Al-Nayzak has partnered with the European Union through the ‘Jerusalem Innovation Park’ Program, which aims to spread the culture of science and technology education and innovation in Jerusalem. EU support for Al-Nayzak comes under its East Jerusalem Programme, a multi-sectoral investment that has grown to over 12 million Euros annually.  The programme covers a broad range of areas including education and health, social inclusion and private sector development, as well as community empowerment and human rights.  Through this programme, the EU has worked consistently with Palestinian partner organisations to support the development of a vibrant and diverse civil society in East Jerusalem.  Similarly, the programme aims at preserving the Palestinian character of the city.
Mohammad Mtour participated in one of JIP program “Talented Students’ Incubator”.  He said the way Al-Nayzak presented science at his school made him understand how it is connected to him.
“Now science has become an interesting subject.  With Al-Nayzak, I do not like my science class to end.  It is always interesting and entertaining. They present it through practical activities, so I do not forget what I learn with them,” he said.   “I now have better understanding of the concept of scientific research, which I had never heard of.  I will approach my whole life utilising this principle,” Mtour said.
“I also gained confidence to speak in public,” he added.
Mtour is one of 210 students, aged 8-14, who are participating in this program. 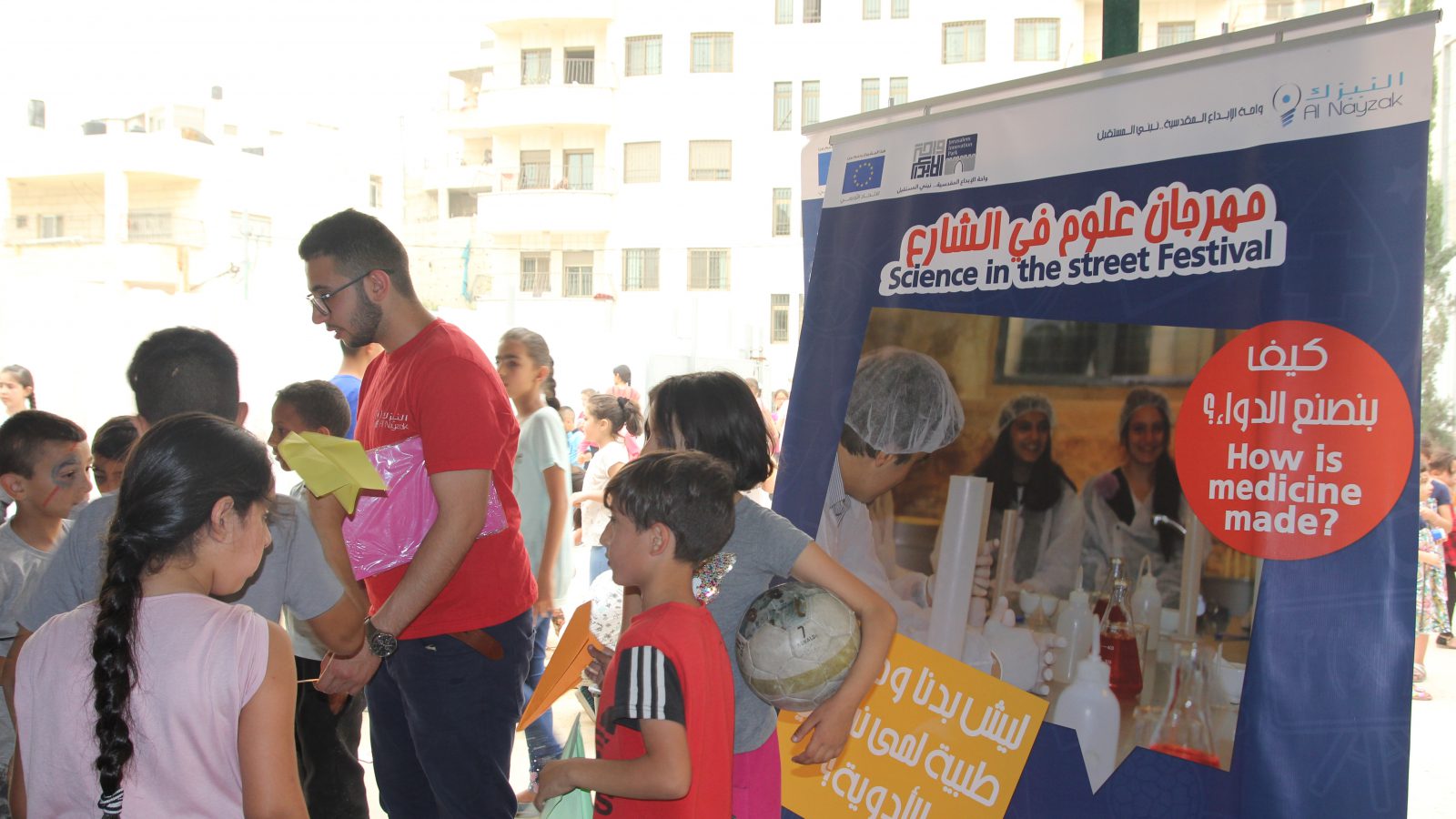 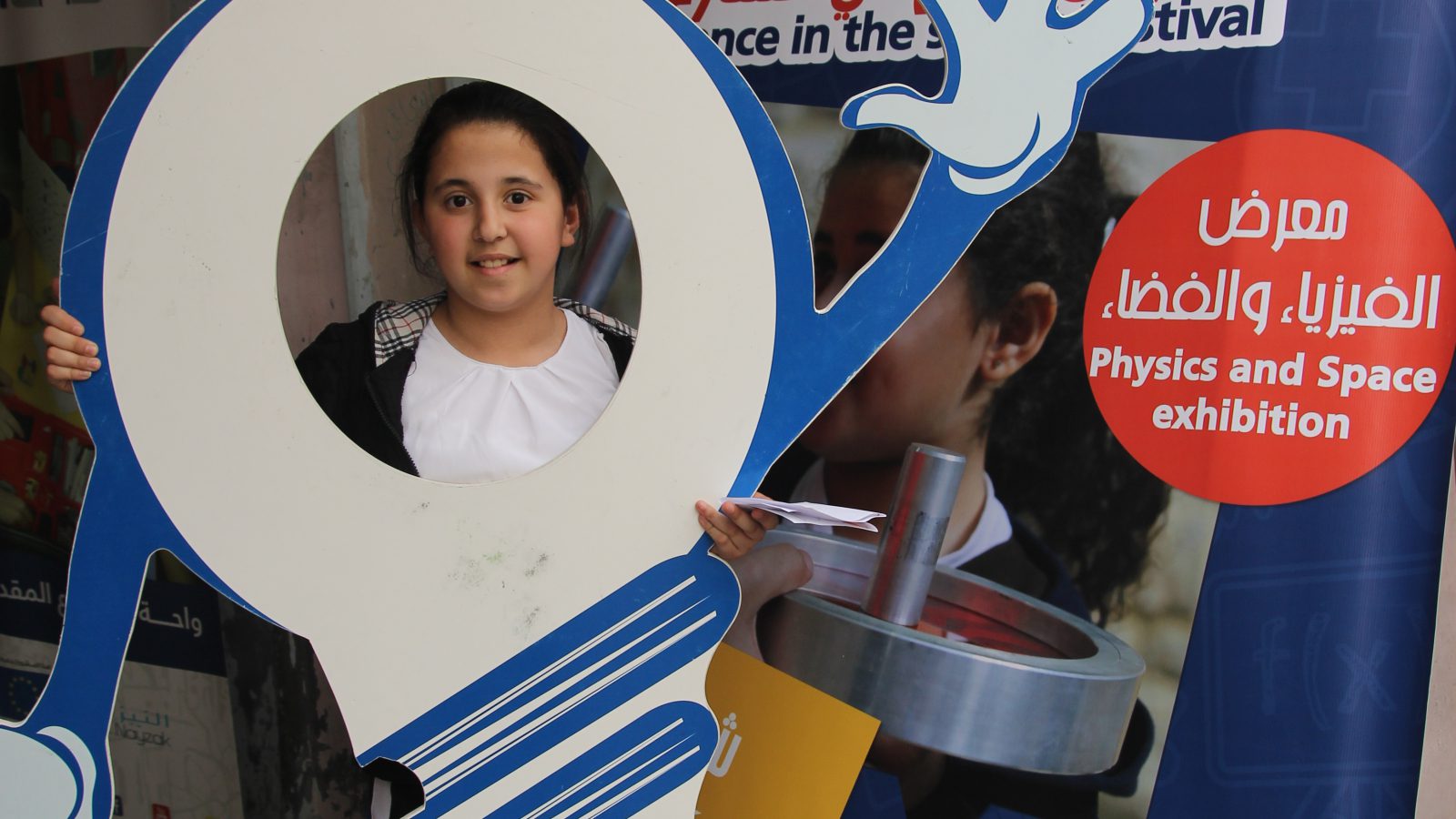 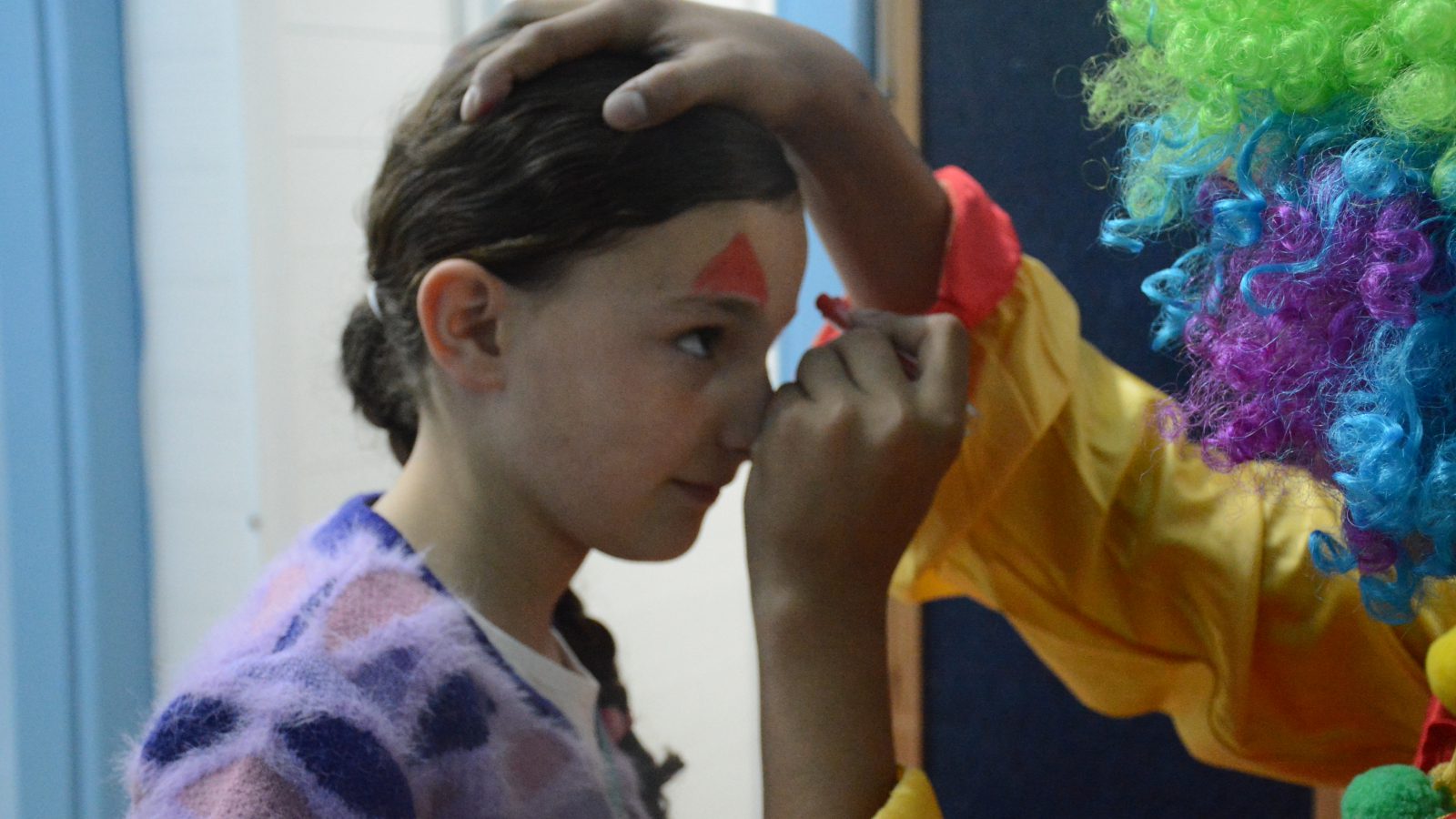 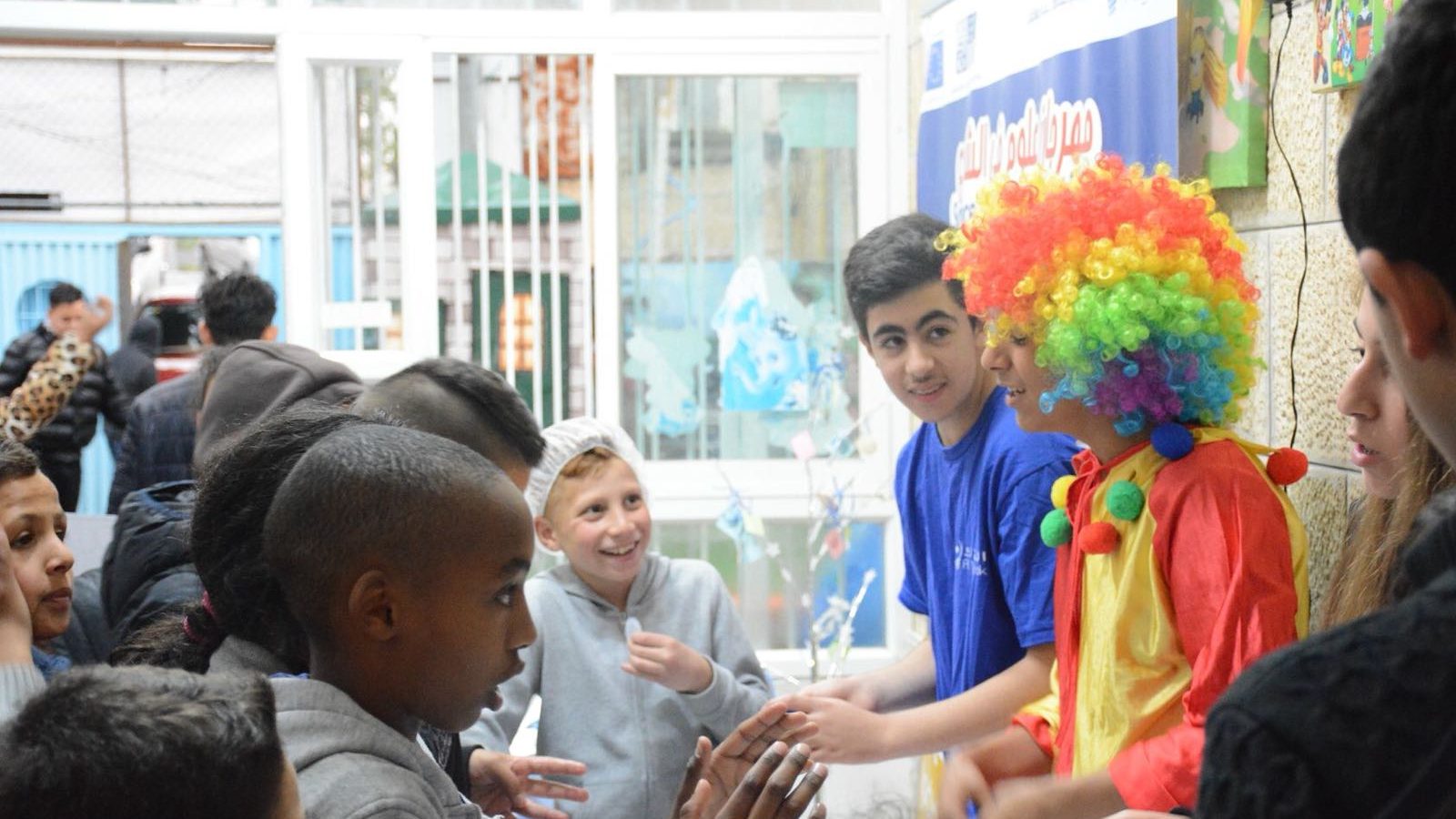 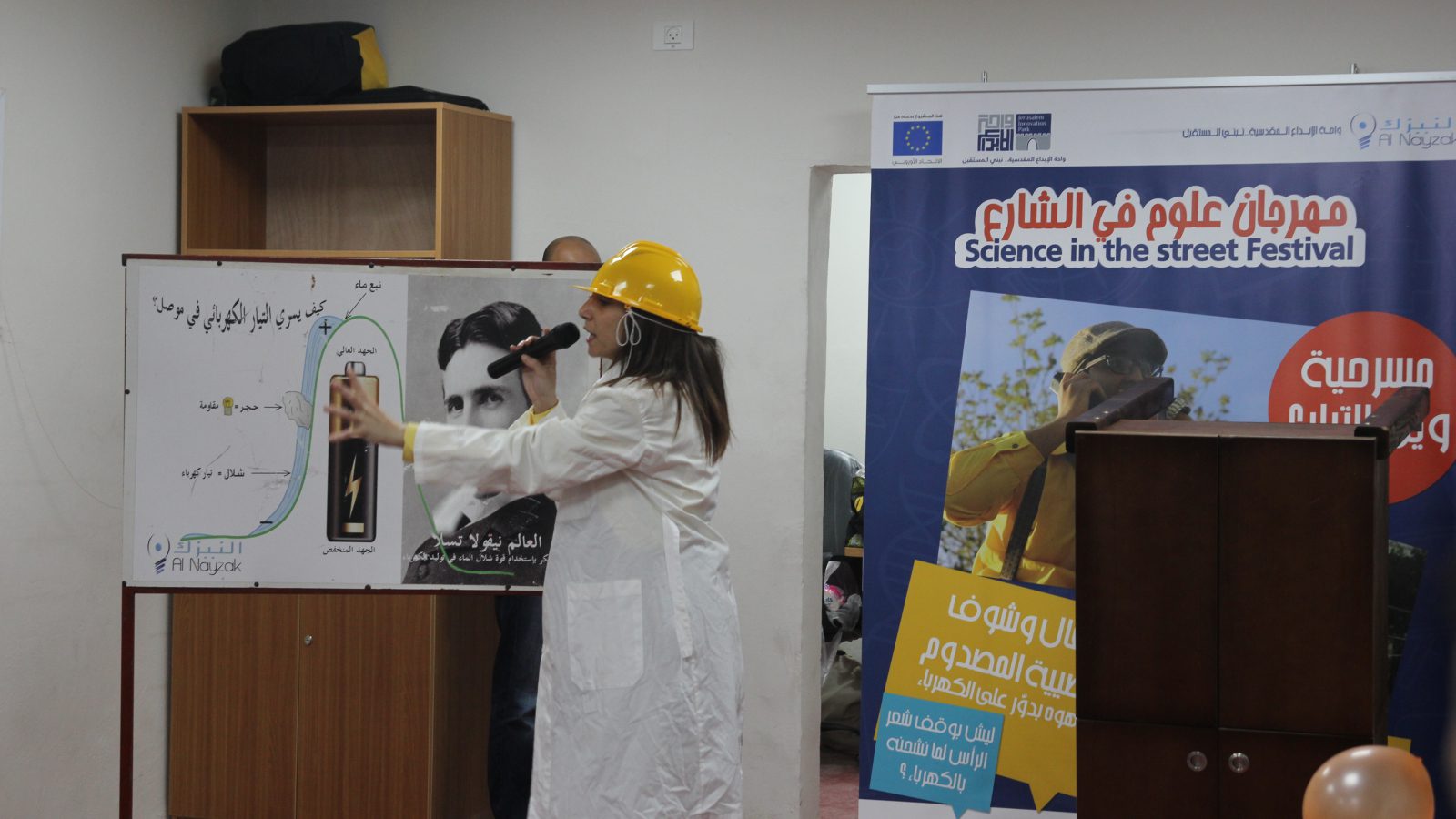 Another program was the ‘Science in the Street Festival’, which was implemented in Jerusalem, especially in marginalised neighbourhoods.  The idea of the festival stemmed from the fact that science is part of daily life and exists wherever we walk or sit.  As such, scientific concepts were presented to students in their neighbourhoods in Jerusalem in a fun and interactive context.
The Science in the Street Festival undertook activities in various fields such as creative thinking, technology, pharmacology, physics, chemistry and biology.  The festival presented interactive scientific concepts that tried to answer questions on the minds of children such as why airplanes don’t fall from the sky.  It utilised theatre in an attempt to present scientific concepts, such as electricity and power, in an interactive recreational format. Moreover, the festival introduced children to the concepts of genetics and the relevance of biology to criminology.
The Science in the Street Festival held 16 meetings in 16 marginalised communities of Jerusalem.  Its activities targeted children from 8 to 16 years old. It was a blast.
“I felt from the advertisement for the Science in the Street Festival that there was a chance for my children to enjoy their time while learning about science.  There were a lot of entertaining experiments about science.  For example, they learned about electricity through the ‘Where is the Current?’ play and learned about gravity and acceleration through an interactive game.  It was worth every moment of their time,” said a parent who brought his two daughters, aged 8 and 12, to the festival’s first meeting in Silwan neighbourhood, just south of the Old City of Jerusalem.
“When children experiment with things, do things by their own hands and ask questions while doing so, things become more relevant, easier to understand, and more enjoyable to them,” commented a proud Kuhail. 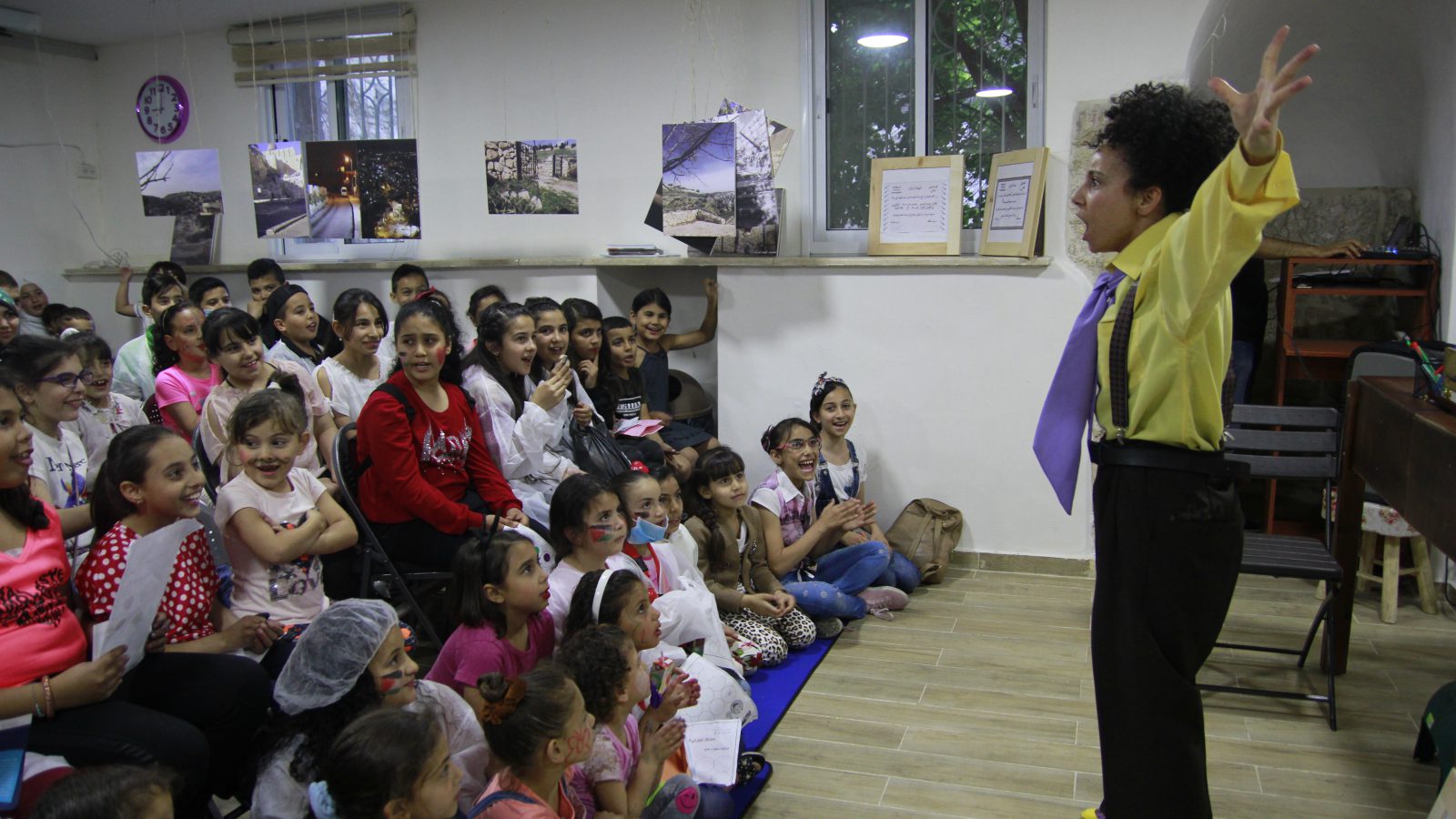 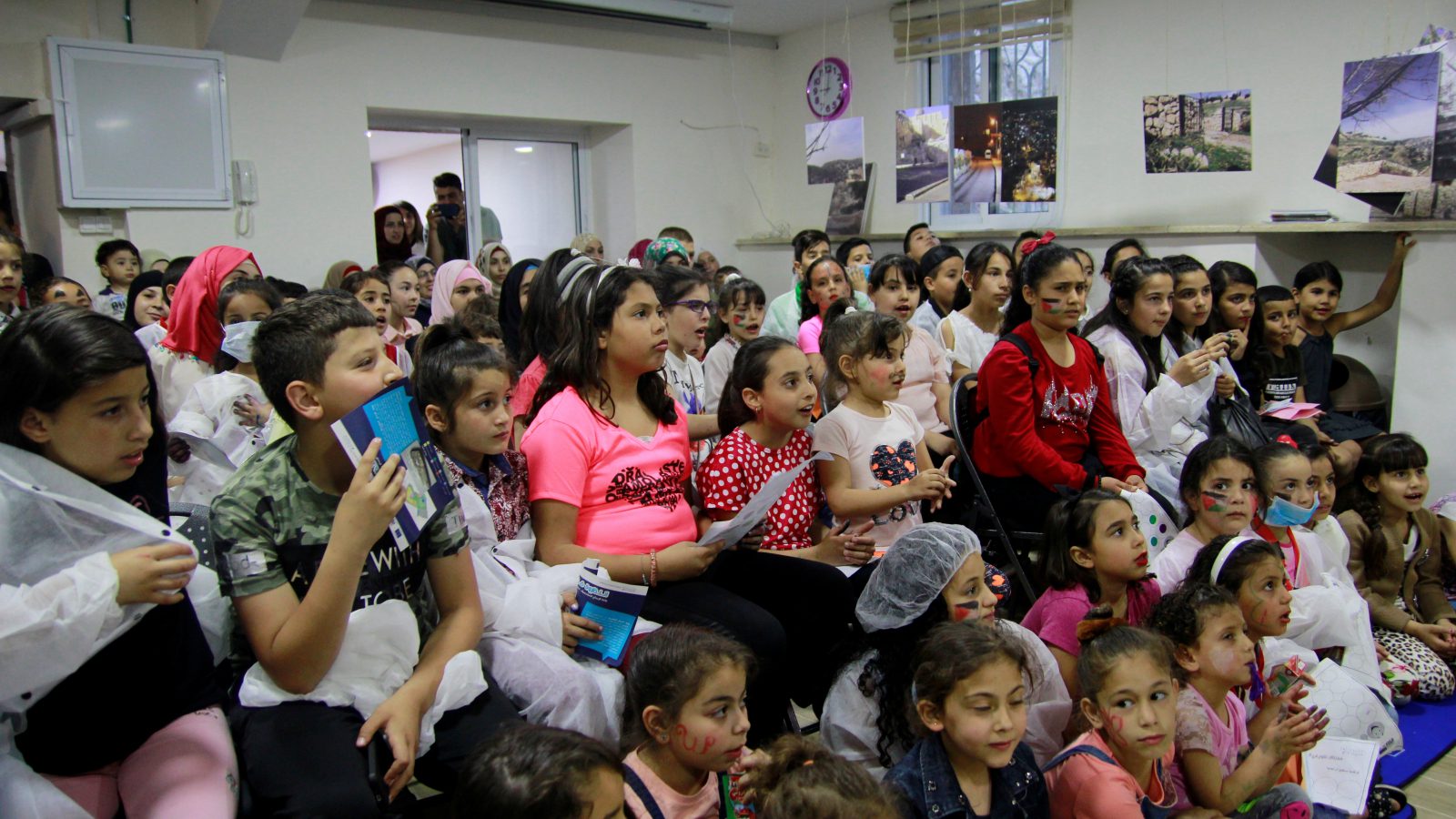 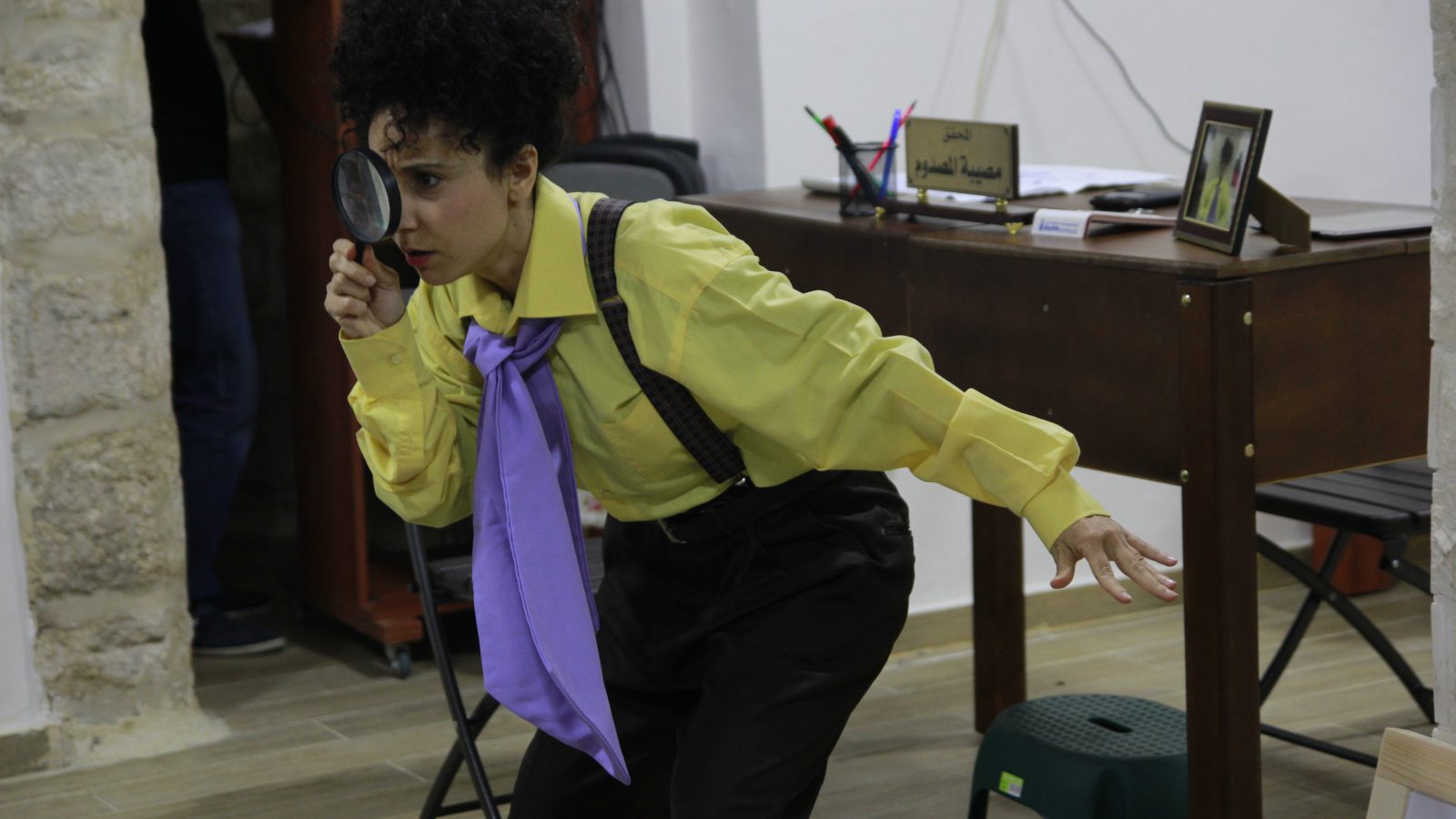 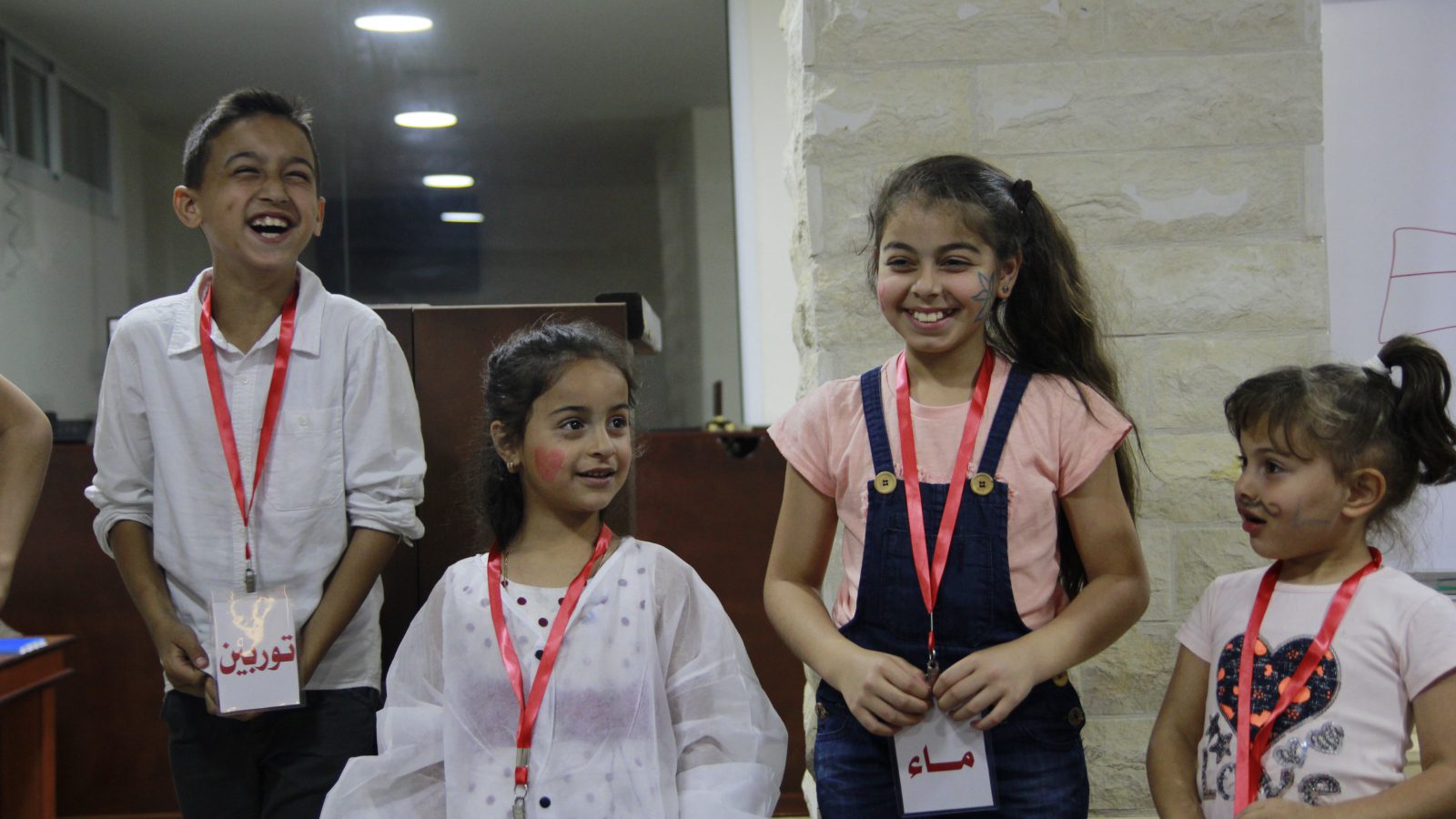 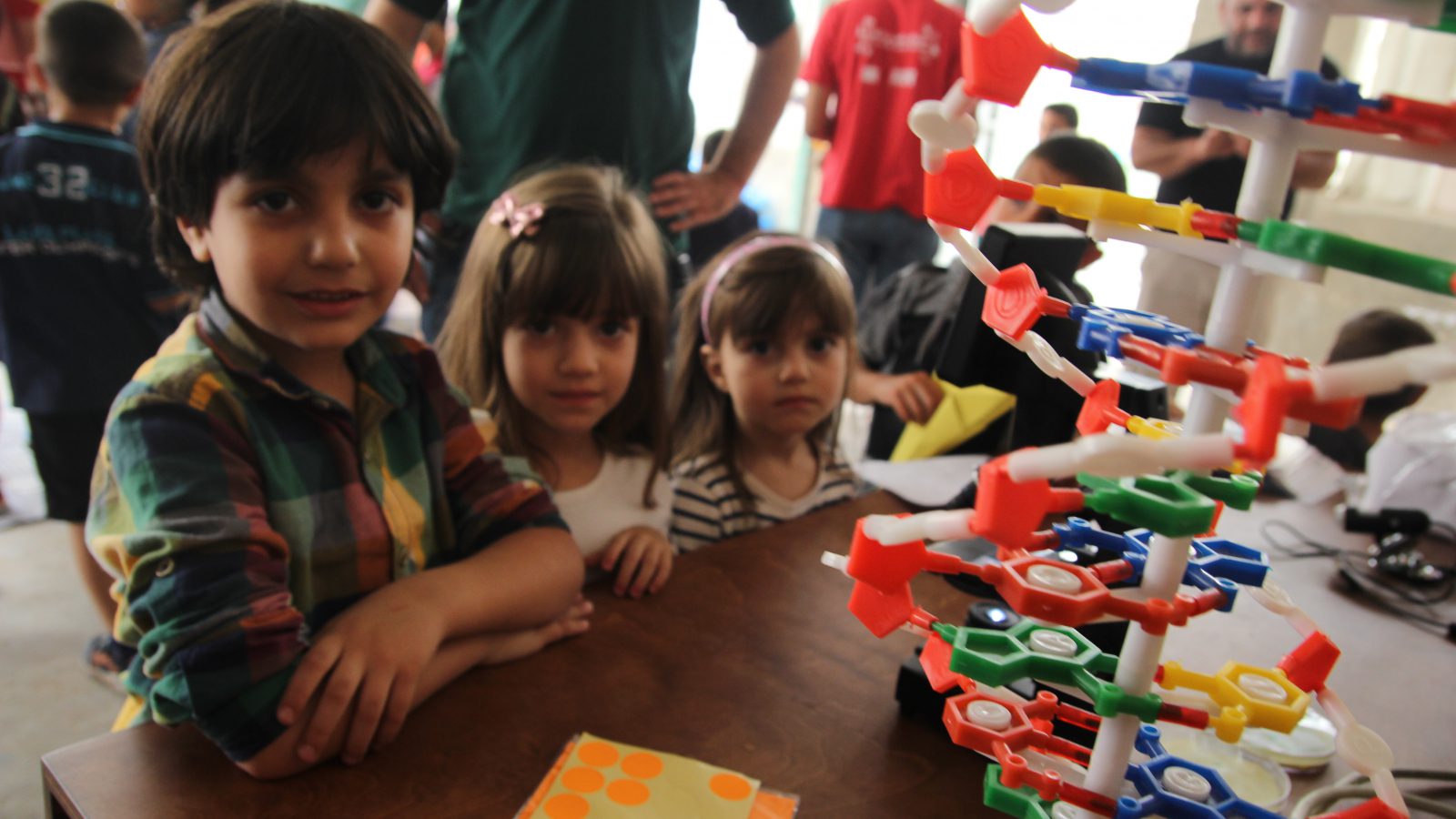 Another EU-funded activity implemented by Al-Nayzak in East Jerusalem over the summer was the Summer Techno Camp, which provided a venue for over 400 children to spend part of their summer vacation learning about science.
Nasry Halawani, 5 years old, currently a preschool student at Hidaya School in Al-Tour east of the Old City of Jerusalem, was one of the participants at the summer techno camps.
“I learned astrology, space science and robotics.  We built a robot which moves and could stop when an object stands in its way,” said Nasry.
Nasry’s father, Haitham, who works as a social researcher in the morning and a taxi driver in the evening, saw quick results: “I could tell that Nasry became curious about science.  I did not expect my son to gain knowledge at the camp.  All I expected was for him to become interested in science, and this is what happened.  He is taking his first steps in that direction,” Haitham noted.
On the character level, Nasry became more sociable.  “He made friends and introduced me to them when I picked him up after camp,” added Haitham.
“We are trying to create an educational environment which stimulates research and discovery, improves the skills of Jerusalemite students, and enables them to employ their gained knowledge to create better living conditions in the future,” said Kuhail.  The EU has invested 942 thousand Euros in this project.
On this programme, Ralf Tarraf, EU representative in Jerusalem, said: “EU support to the Jerusalem Innovation Park as well as Al-Nayzak’s innovative approach to education is significant and strategic.  We do it because we believe that Education is crucial in equipping people with the right skills to find fulfilling work and become independent, engaged citizens.”
“Al Nayzak provides innovative, cutting edge education to Palestinian school children.  They drive innovation, economic growth and development among students.  This feeds the future and the coming generations. Right to education is vital to guaranteeing a life where peace, security, and dignity exist and prosper.”
With the world headed in an unknown direction, traditional teaching methods are becoming obsolete.  The book, notebook and pencil are no longer tools that children relate to.  They are on their tablets and smartphones all the time.  As such, new methods that transform students into partners in knowledge, not only recipients of knowledge, are being utilised.
With EU support, Al-Nayzak is doing just that.