The European Union has provided a 30 million Euro grant to the Gabal El-Zayat wind farm, in Egypt, which costs a total of 340 million Euros. Several European donors, including the German Development Bank, have also contributed to this ambitious project on the shores of the Red Sea, with the aim of generating clean energy.

In the Gabal El-Zayt area, around 350 km from Cairo in the direction of Hurghada, you can literally turn wind into money. Located between the Gulf of Suez and the Red Sea mountains, the topography of the site causes the wind to blow at an average of 10.5 metres per second, faster than in the neighbouring town of Zaafarana, on the shores of the Red Sea, where wind speeds are around 8.5 metres per second. Evidently, Egypt has great potential in terms of wind power. It is therefore attempting to accelerate its transition to this clean energy source, by building wind farms along the Eastern shore of the Red Sea.

The country, a producer of gas, has long relied on fossil fuels, but since the 1990s a shift to wind power has begun, in an effort to generate low-pollution electricity. One example of this is the Gabal El-Zayt wind farm, co-financed by the European Union, the German Development Bank (KFW) and the European Investment Bank (EIB), in cooperation with the Egyptian government. This wind farm, which covers an area of 43 km2, is part of a complex spanning 600 km2. It is expected to reduce CO2 emissions to 400,000 tonnes per year, and therefore represents an ideal area for energy investment. 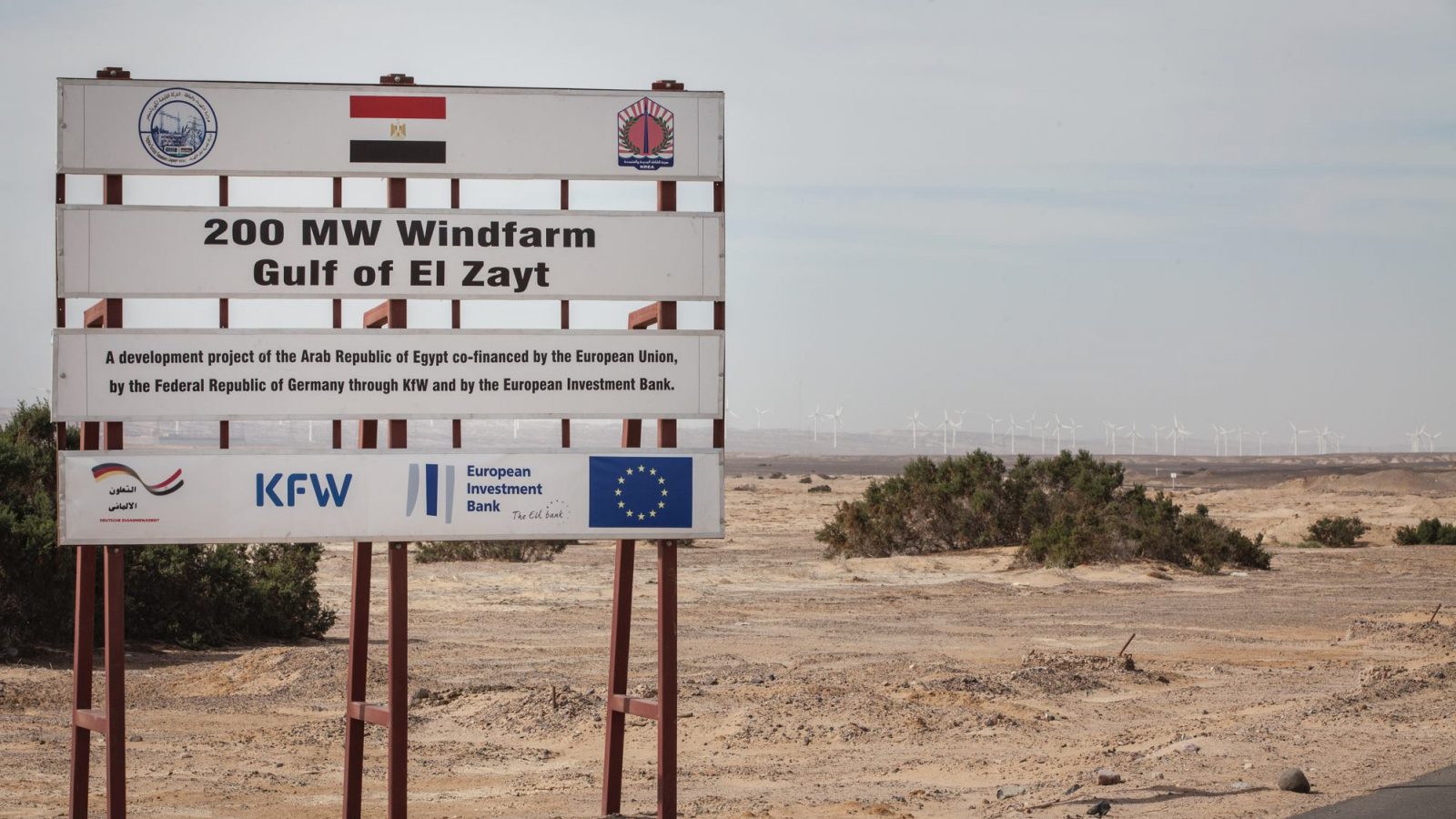 The Gabal El-Zayt windfarm in Egypt is co-financed by the EU, which has granted… 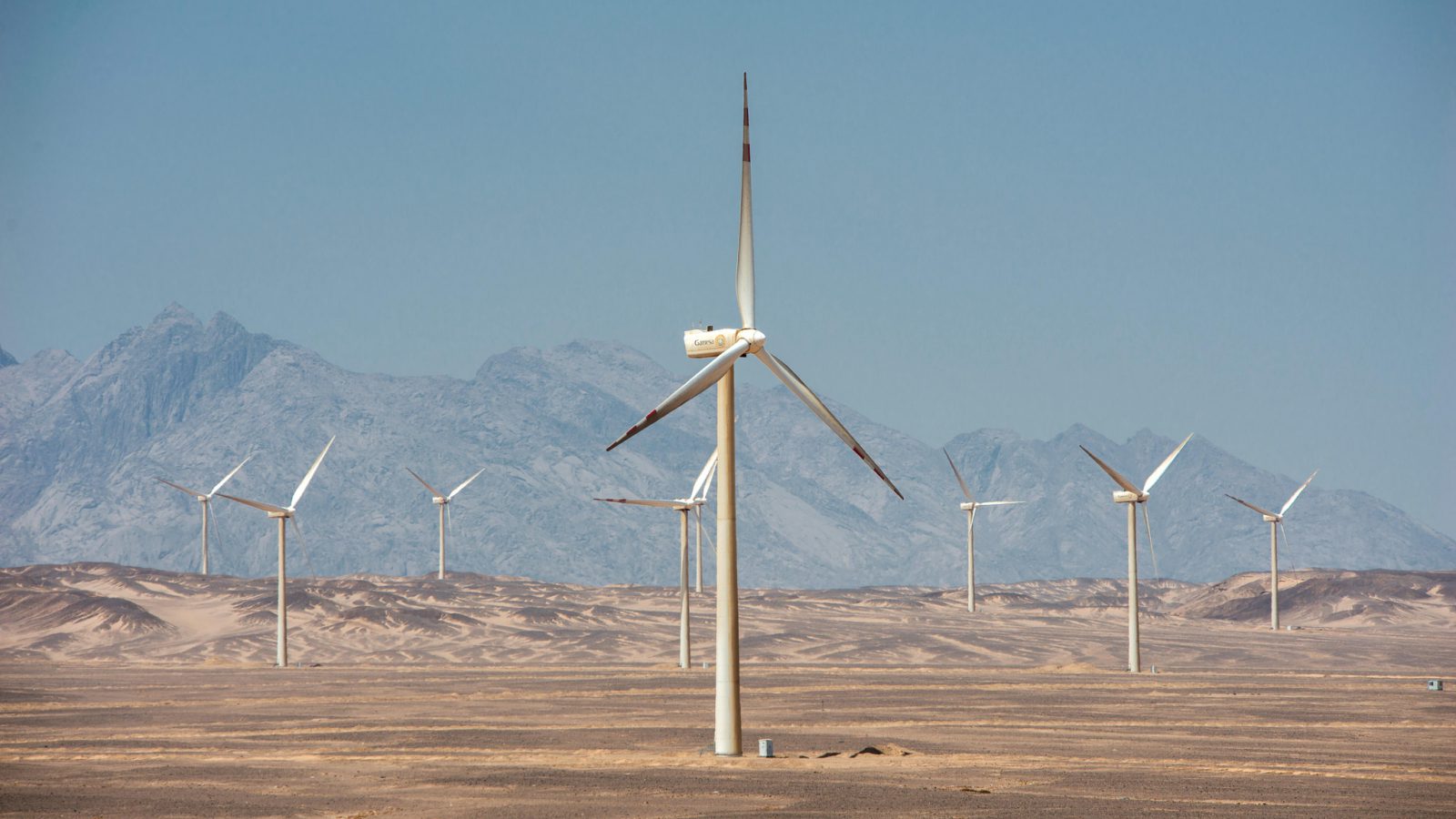 The Gabal El-Zayt windfarm, which covers an area of 43 km2 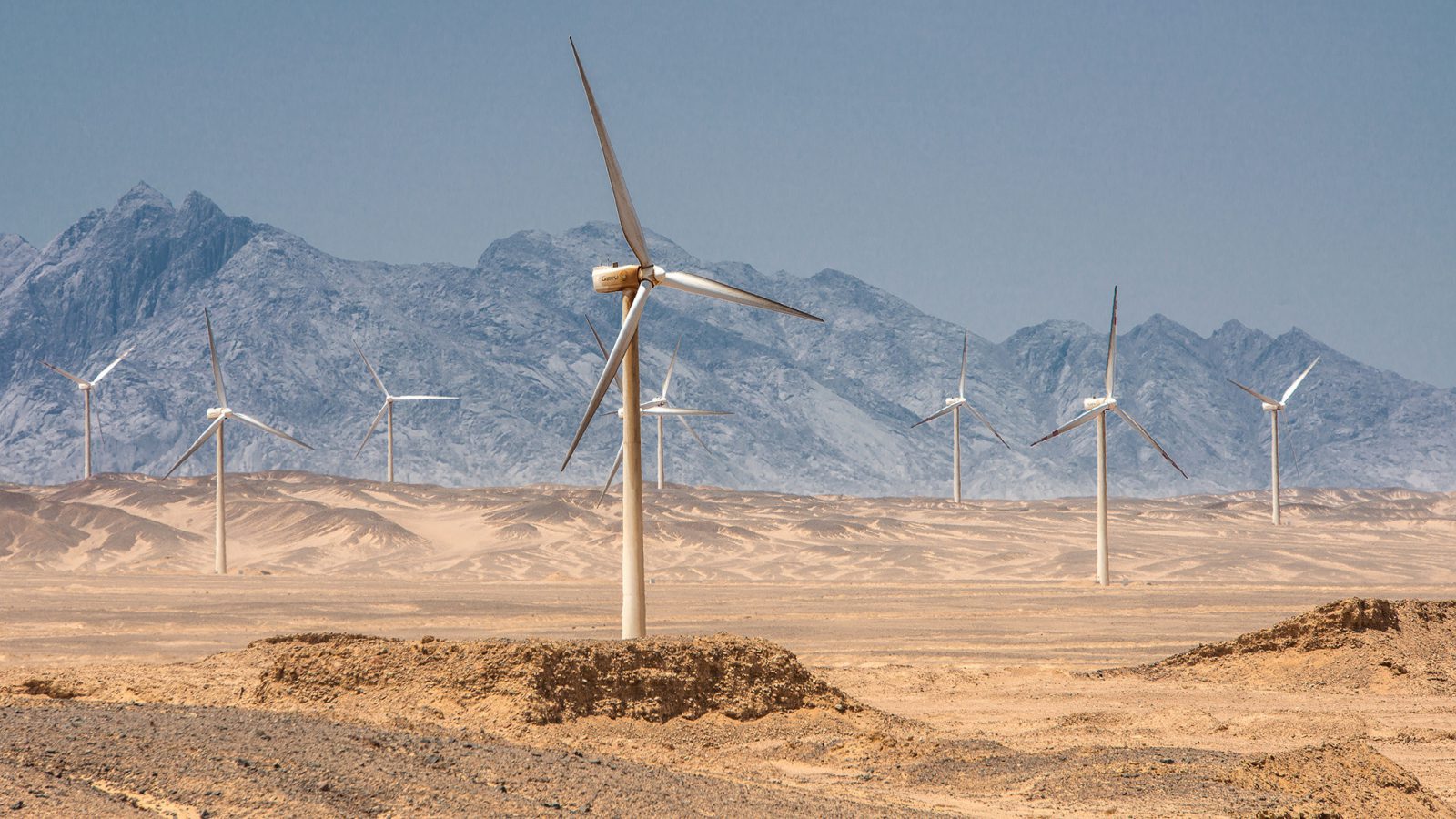 The topography of the site causes winds to blow at an average of 10.5 metres…

On the expanse of sands stand 120 turbines, known on the ground as the KFW project. This bank essentially oversees the work and coordinates the various partners.

The engineers and those responsible for the implementation of the project are thrilled to see the turbines in this new expansion phase up and running: “They are going to give us a breath of fresh air, after so much hard work! ”, they rejoice. After all, despite the blazing sun and relatively high temperatures, there is more wind in summer than winter.

The engineers and technicians have even grown a small vegetable plot. Right here, in the middle of the desert, they have planted beans, olive trees, watermelons and mint in front of their accommodation. It’s their favourite hobby!

Several nationalities mingle on a site that brings together Egyptians with temporary experts from countries including Morocco, Algeria, Spain, India and Turkey. “The Bedouins and locals help us keep the site safe and the rest of the workforce come from all over Egypt. We rely on the Egyptian Renewable Energy Agency (NREA) ”, explains engineer Akmal Mohamed, who has been in charge of the operation of the site since 2014.
Like the majority of the workforce, Mohamed previously worked at Zaafarana wind farm. As a result, he and his colleagues often compare the two sites. “The 120 turbines here are far more modern and powerful. Altogether, they supply 240 Mega Watts,” explains engineer Mahmoud Hamed Abdel-Hamid, who managed the extension of the KFW project. As he walks along the dirt track, he points to the oil fields that line the road, to the right of the turbines.

In total, the Gabal El-Zayt project generates 580 MW, each turbine producing 2000 kilos of electricity, compared to 850 kilos per turbine at Zaafarana. Each turbine is cleaned every two years and undergoes maintenance every six months. 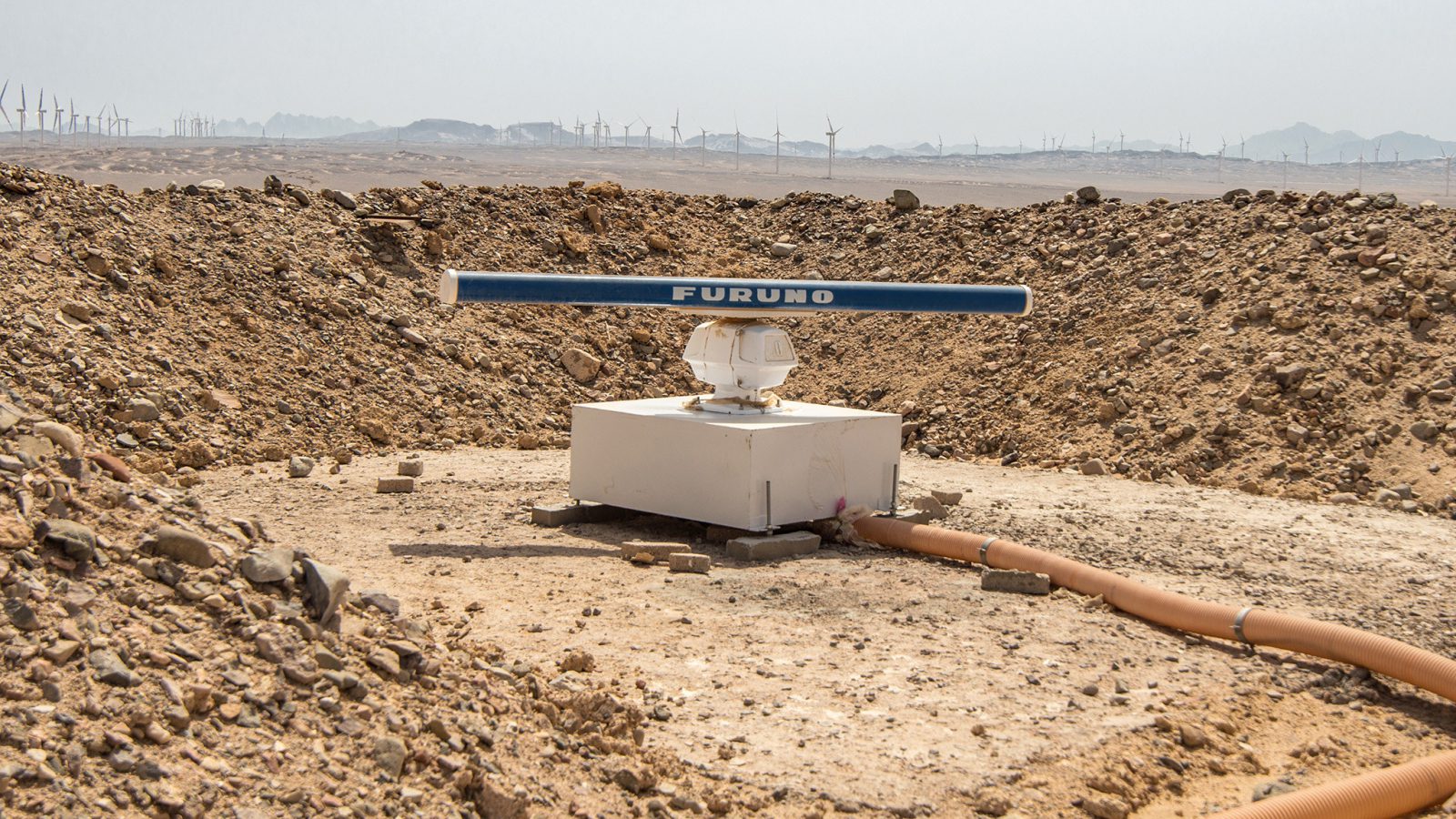 In order to protect birds from danger, a special radar system has been installed 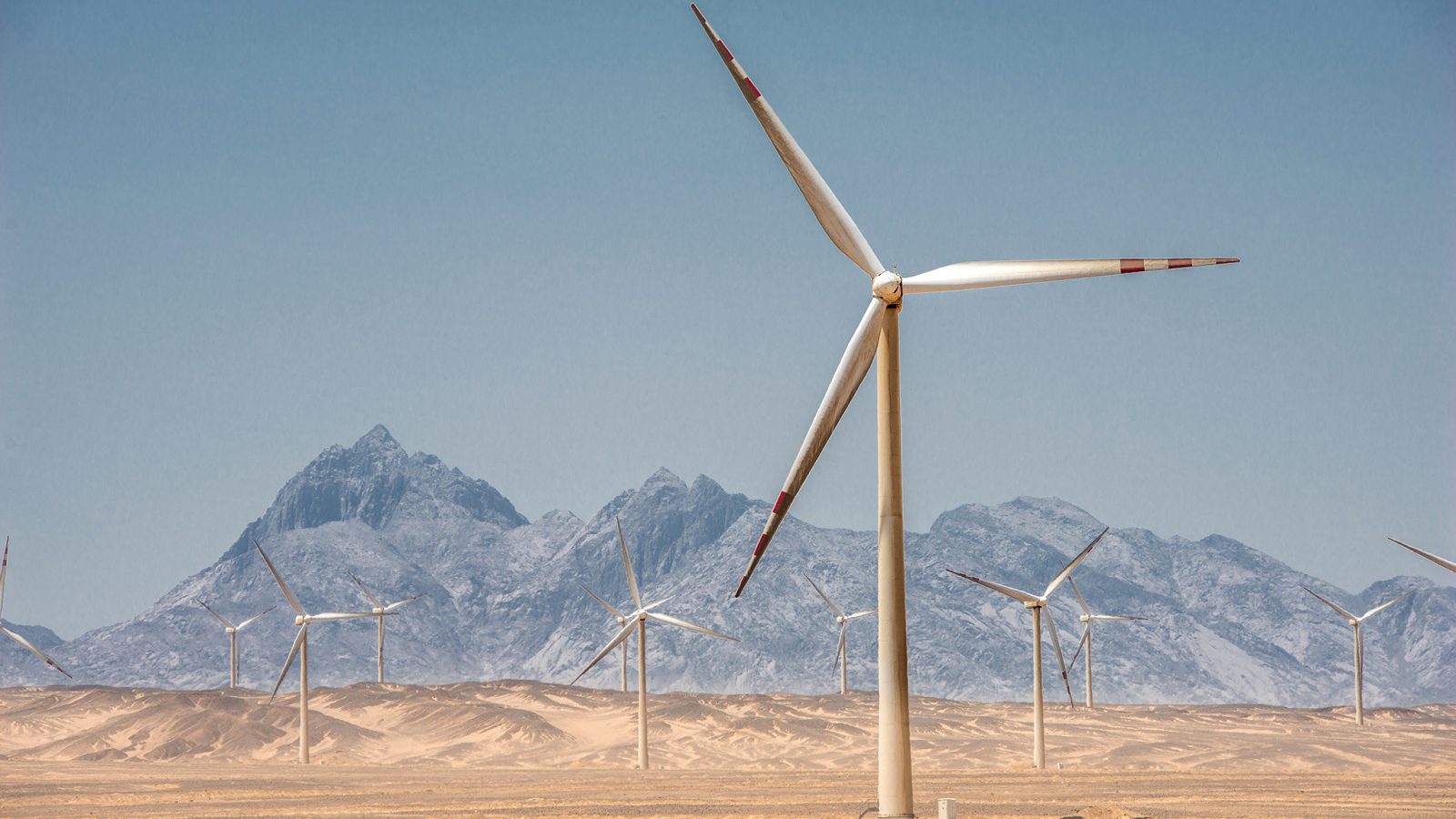 Despite the blazing sun and relatively high temperatures, there is more wind in… 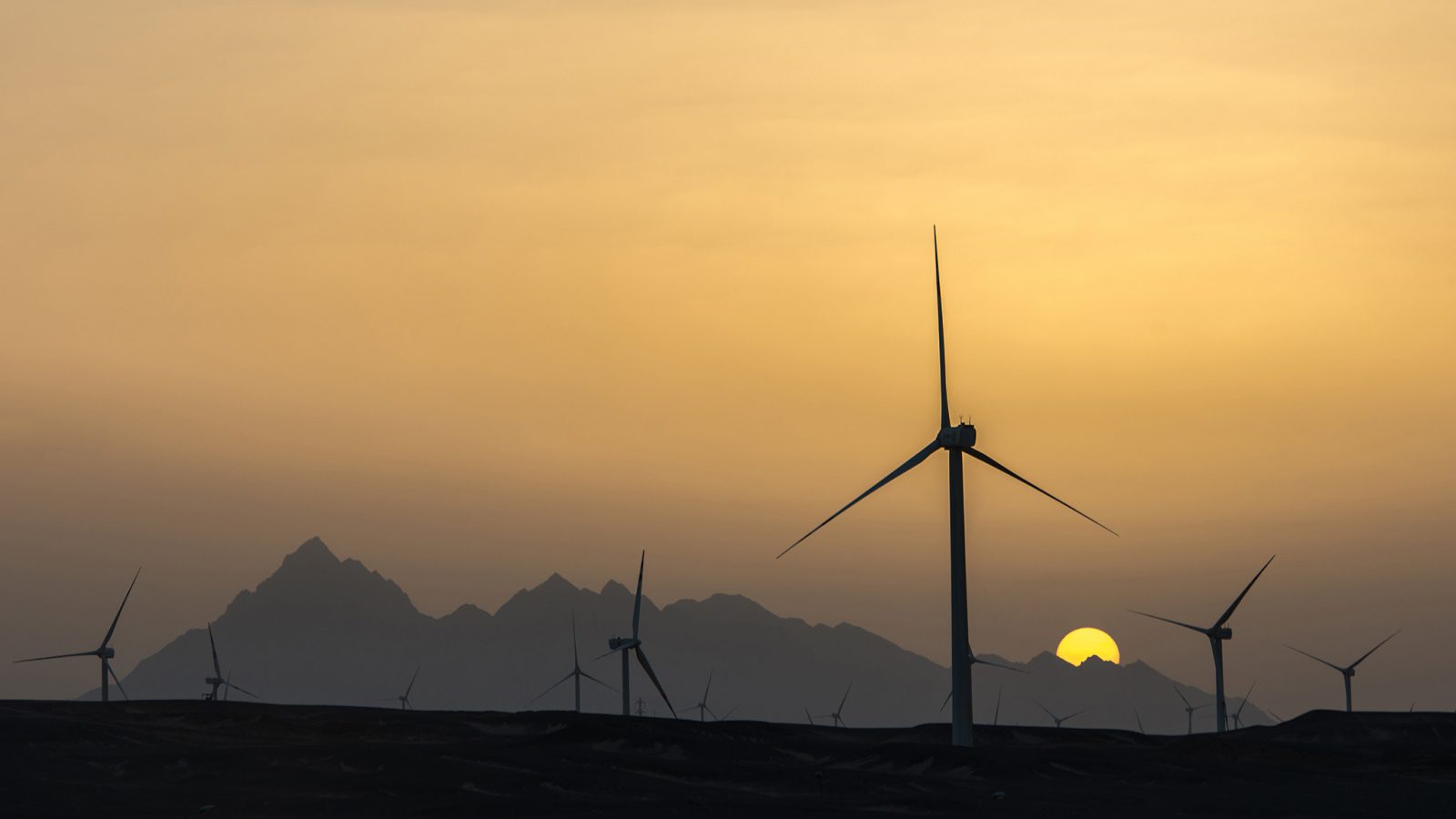 At twilight, the Gabal El-Zayt windfarm takes on an enchanting atmosphere 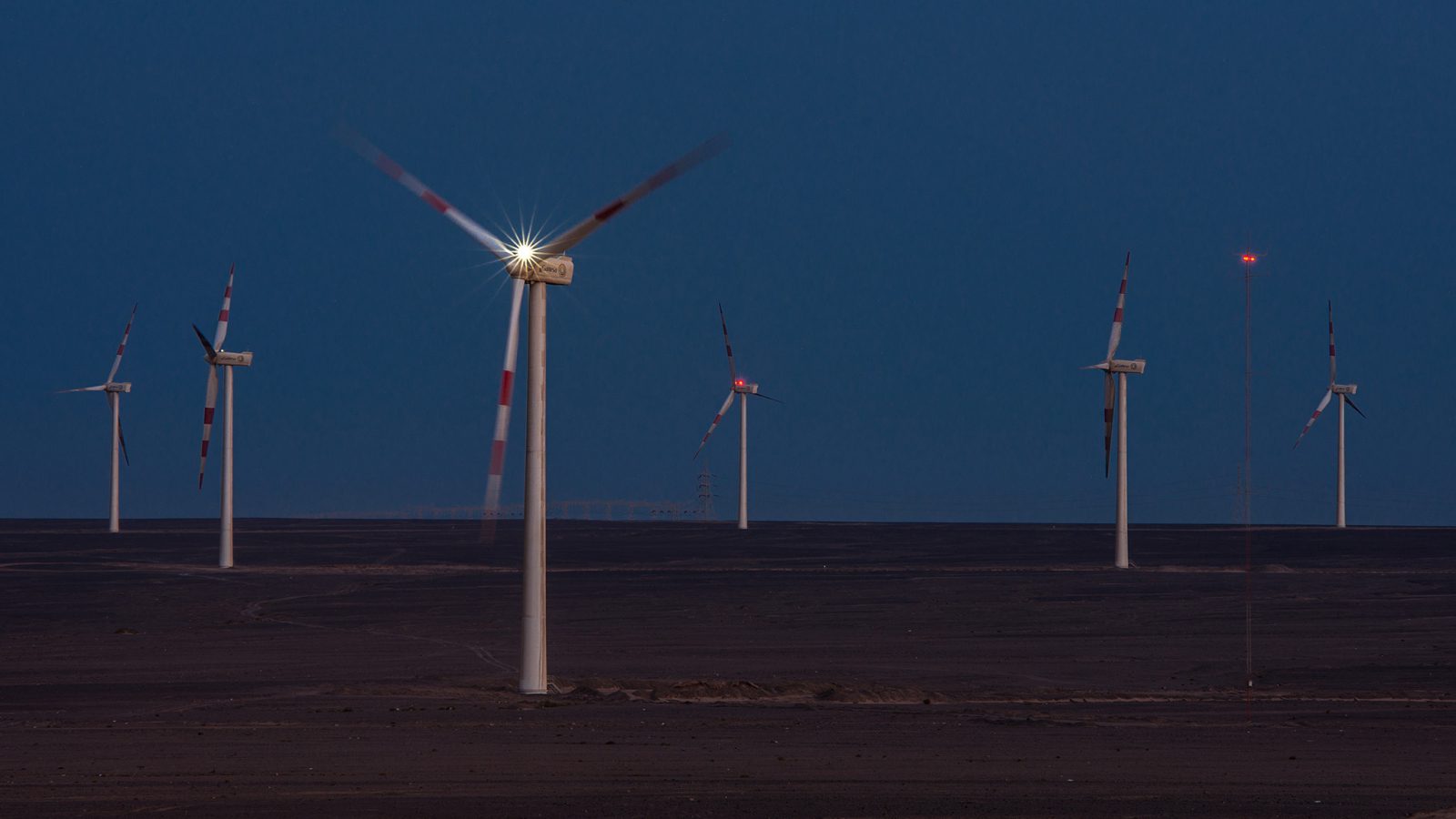 Nothing disturbs the calm of the site except the call of birds of prey, like the black eagle soaring above the turbine blades. These are marked with three red lines to alert birds to their presence, as the wind farm is located on the migratory route of several avian species. To avoid exposing them to danger, a special radar system has been installed, in collaboration between the Egyptian army and a Portuguese company.

Observers and monitors are present on site every day, and work together with ornithologists from the Ministry of the Environment, who also patrol the site from morning to night. You can find them scrutinising a flock of white storks through their binoculars, counting the number of migratory birds or calculating the altitude of their flight.  “If the lives of the birds are in danger, the radar detects this and provides details. Sometimes we have to stop the turbines in less than one minute to prevent carnage. This radar system has been in use since last Spring”, says Mahmoud Hamed Abdel-Hamid. The birds have also become a hobby for the experts: Mahmoud and his colleagues enjoy fascinating conversations with the ornithologists, who often have a copy of the Collins guide to birds to hand or downloaded on their mobile phones.

Sometimes, a black kite or a falcon crosses the sky, and sometimes hundreds or even thousands of birds pass overhead.  The engineers enjoy spotting and identifying them, as does German technical expert Wesly Urena Vargas, who visits the site at least two or three times per year. The latter, hired by KFW, has often helped overcome difficulties related to the climatic conditions of the desert, such as sand and dew.

From the point of view of the European Union Delegation in Cairo, Ahmed El-Beltagui, director of the programme concerning energy and transport project,s confirms that this project will be followed by another similar one, this time in partnership with the French Development Agency (AFD): “The formula remains unchanged. The EU awards a 30 million Euro grant to a project with total costs of 340 million Euros. This financial contribution makes it easier to obtain a loan from local investment funds. At the same time, the amount provided by the EU reduces the interest rate that Egypt must repay”. On a visit to Cairo from 22 to 24 March 2018, Miguel Arias Canete, the European Commissioner for energy and climate, signed a Memorandum of Understanding with the Egyptian authorities concerning the strategic partnership between Egypt and the EU on the subject of energy. As a result, these projects remain on track. Egypt, rich in natural gas and renewable energy resources, is already preparing to become an energy corridor between the Middle East and Europe.